Zambia: IMF Board approval is major milestone and provides lessons for other EM

The IMF Executive Board granted the long-awaited approval of Zambia’s extended credit facility (ECF) yesterday. The US$1.3bn arrangement (equivalent to 100% of quota) will last for 38 months and enables the immediate disbursement of US$185mn. This major milestone comes just shy of two years after Zambia defaulted, just over a year after President Hichilema took office and nine months after an IMF staff-level agreement (SLA) was reached, but in reality, represents the culmination of a painful stop-and-start process that began over five years ago under the administration of former President Edgar Lungu.

We have already discussed the implications of Zambia’s ECF ad nauseam (see here for a deep dive and the 'related reading' section below for further analysis), so we will refrain from rehashing it in depth here. In an FAQ document published alongside yesterday’s press release, the IMF outlines the next steps in the process, which include: 1) signing a memorandum of understanding (MoU) with the official creditor committee on how to deliver debt relief consistent with ECF parameters by the end of the year; 2) initiating discussions with private creditors on how comparability of treatment will be achieved; and 3) implementing the MoU with official creditors via bilateral agreements and with private creditors via “various modalities”.

As we highlighted recently (see here and here), this process could take some time. While official creditors have agreed in principle to restructure Zambia’s debt, agreements have not been reached on the envelope, quantum or specific form of the relief, constituting what we think is the bare minimum threshold for what could reasonably be considered "financing assurances" (and possibly indicating a lower bar for other future restructuring cases – more on this later).

Further, private creditors had still not received information on the assumptions underlying the reform programme and DSA, and will need time to digest the information and conduct their own analyses. If private creditors, who have so far been forced to sit on the sidelines without any say in the formation of Zambia’s recovery and restructuring plans, disagree with the assumptions of the DSA and/or the restructuring proposals being imposed on them, then there could be delays to the process.

That said, Board approval is still a significant milestone and will likely result in the public dissemination of the IMF’s DSA via an accompanying report, allowing the private creditor committee to finally negotiate with the government in a meaningful way. The ball is now in the court of the two creditor committees, and the process will move as fast or as slow as Zambia’s creditors are prepared to go.

Official creditors have the clear 'first mover advantage' in this process, as they will essentially craft the terms of the restructuring (provided it is consistent with the IMF’s view of what is required to restore debt sustainability), while private creditors will then be expected to provide 'comparable' relief in NPV terms.

Zambia’s eurobonds have been on a bit of a ride in recent months, with the ‘24s rising from a low of US$47.5 in mid-July to US$67.3 in mid-August, before falling back to US$60.3 at the time of writing, amid broader EM weakness. The bonds have not reacted to the IMF announcement, which was well-telegraphed and, consequently, already priced in. 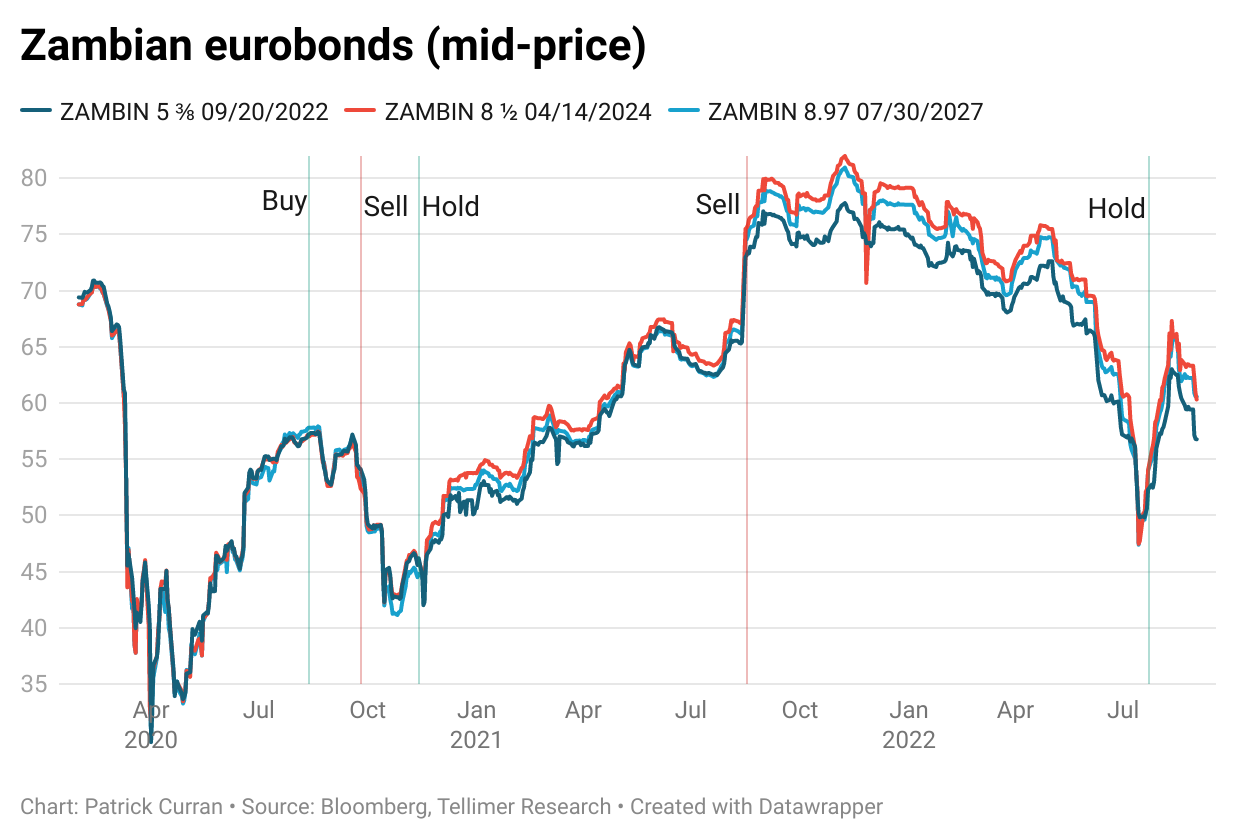 Zambia’s bonds are now trading at the same level they were at the beginning of August, which, for illustrative purposes, we calculated would break even with a five-year maturity extension, 50% coupon cut and 18.5% nominal haircut at a 12% exit yield or a 15.5% haircut at a 14% exit yield. On balance, we still think this is a reasonable restructuring scenario, with nominal haircuts likely to be larger but cashflow relief likely to be less aggressive. As such, we retain our Hold recommendation.

Meanwhile, ZMW reacted favourably, rising 3.2% on the day and 4.8% so far on the week, at the time of writing. This follows our recent upgrade to Buy on the ZAMGB 11 01/25/2026s on August 8 based on their likely exclusion from the debt restructuring and real yields >15%. Yields have since contracted by c120bps to 24.2%, pushing bonds up by 3.7% in price terms and taking the total return to c9.2% in total return terms since August 8. We retain our Buy recommendation, with Board approval improving Zambia’s balance of payments dynamics and lending further support to ZMW. 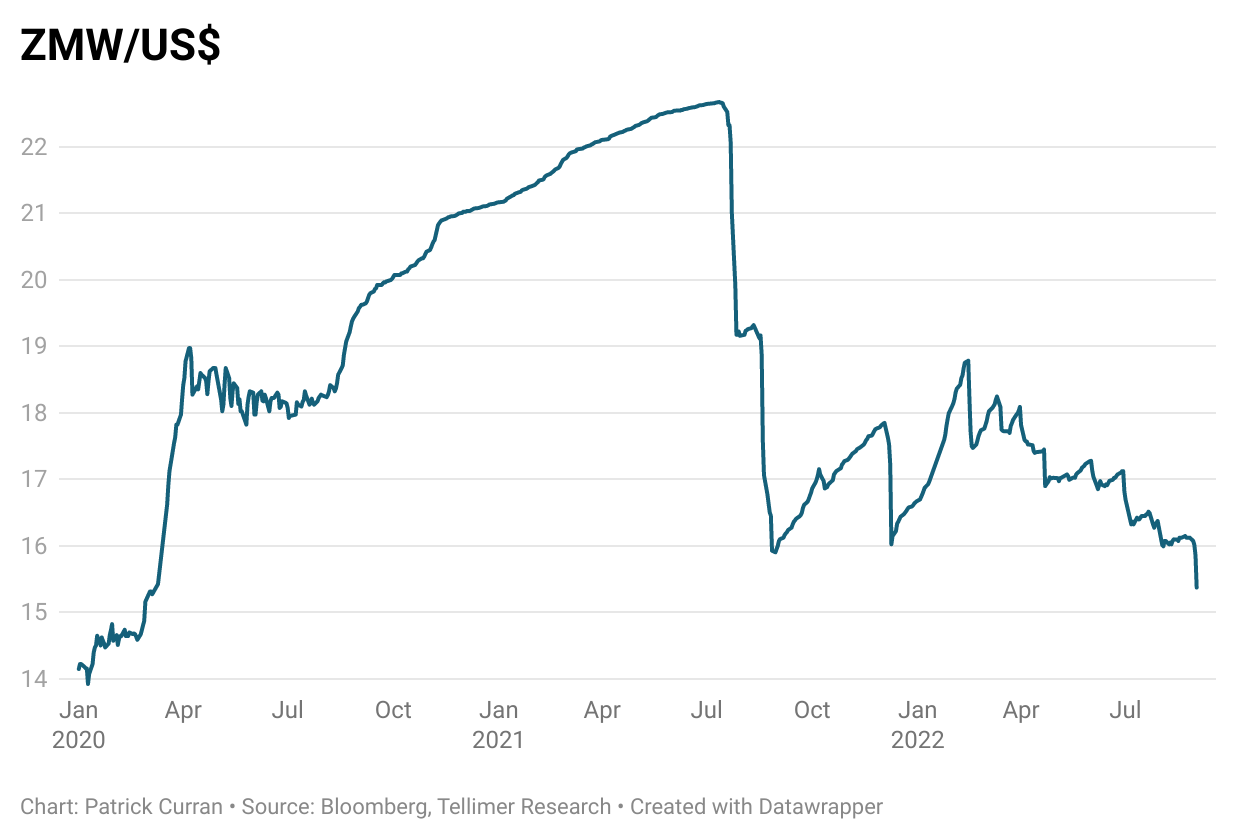 Lessons for Sri Lanka and beyond

Zambia’s Board approval is also a significant milestone for the G20’s Common Framework for debt restructuring (see here for a more detailed explanation) and provides some lessons for other countries undergoing a restructuring. While Sri Lanka is not currently a part of the Common Framework (although it could be added in the future if the framework is expanded to cover middle-income countries), it received staff-level approval for its own US$2.9bn, 48-month ECF this morning.

We discussed the implications of the SLA at length in a report yesterday, so once again avoid rehashing them here, but we still think Zambia’s Board approval is a good opportunity to draw some potential lessons for Sri Lanka. With the SLA now secured, Sri Lanka is at the same point Zambia was in December, providing a baseline for how long it could take to receive the financing assurances and implement the prior actions needed for Board approval (eg c9 months).

This lends credence to our view that Sri Lanka’s plan to secure Board approval within three months is unrealistic, especially given a restructuring process that is likely to be much more complicated in Sri Lanka than it was for Zambia (given less international goodwill, a more uncertain political backdrop and a deeper economic crisis, among other things – see here for a more detailed explanation).

Conversely, if Zambia is a sign of increased urgency by the official sector to implement restructurings (eg greater urgency from bilateral creditors such as China to provide “financing assurances” and a greater willingness by the IMF to accept those assurances before the details are fully fleshed out), than our prediction of a lengthy restructuring in Sri Lanka could turn out to be overly pessimistic.

It is still too early to know which of these views will prevail, but the flurry of activity at the IMF this week after a brief hiatus (with the Board also approving a US$18.5bn credit line for Chile and the seventh and eighth reviews of a newly expanded extended fund facility (EFF) in Pakistan in addition to the Board approval in Zambia and SLA in Sri Lanka) suggests increased urgency in the Fund’s response to worsening global economic conditions.

For the growing list of EM on the verge of crisis, this should be seen as welcome news (Egypt is also reportedly nearing an IMF agreement and restructuring talks in Ethiopia have seemingly gathered renewed momentum, after a long lull). That said, while we welcome the SLA, we still think Sri Lanka has a long road ahead, and it is not clear if the recent activity represents increased urgency from the official sector or the mere coincidence of events that have been long in the making.