Zambia reached a staff-level agreement with the IMF on 3 December for a US$1.4bn Extended Credit Facility programme to run from 2022-25, with a subsequent IMF press release and joint press conference on 6 December providing additional details. Following nearly seven years of on-and-off negotiations with the previous Lungu administration, the staff-level agreement comes just over 100 days after President Hichilema’s (HH’s) “New Dawn administration” came into power, and essentially fulfils an earlier promise by Finance Minister Situmbeko Musokotwane to reach an agreement by the end of November, which we saw at the time as being a very ambitious target.

Notably, the agreement is still subject to Executive Board approval and “receipt of the necessary financing assurances” from official creditors. A statement by the IMF also said “We support the authorities’ efforts to maintain a constructive engagement with private creditors to help secure a deal on comparable terms to official creditors. Sufficient progress on this front will be needed before the staff-level agreement can be presented to the IMF Executive Board for approval.”

Given the still-nascent progress on debt restructuring, this could cause some delays to Board approval. According to Li Jie, China’s ambassador to Zambia, the government is yet to present a specific request to Chinese creditors, adding that “The Chinese creditors, they are just puzzled, they don’t know what specific plan the Zambian side has made for discussions, or for negotiations.” The government is also yet to initiate talks with private creditors, with IMF Managing Director Kristalina Georgieva expressing frustration on Friday with the slow pace of talks under the Common Framework in Zambia, Ethiopia and Chad.

To be fair, an IMF agreement is also a sort of prerequisite for creditor discussions, so the staff-level agreement should pave the way for productive discussions. Indeed, Finance Minister Musokotwane says that “It is my hope and expectation that we will make progress on these discussions in the coming few weeks. Our commitment is to ensure equitable treatment of all creditors.” The IMF’s debt sustainability analysis (DSA), which will likely be released in a full report once Board approval is reached, will also be the key determinant of what kind of relief is required to set debt on a sustainable path.

This creates a bit of a chicken and egg situation, with the IMF waiting to gauge the extent of relief that creditors will agree to before finalising the programme and the creditors, in turn, waiting on the DSA to see what kind of relief will be required of them. However, this is typical of debt restructurings and should be manageable. While we think official sector financial assurances will be key to Board approval (this has been the key sticking point in Ethiopia), it would probably be sufficient for the Board to approve a programme if the authorities can demonstrate good faith negotiations with private creditors.

The key pillars of the programme include a “large, upfront fiscal adjustment” built on a “shift in spending, away from inefficient public investment and poorly targeted subsidies, towards greater investment in health and education and the delivery of more social benefits,” alongside enhanced revenue mobilisation and improved debt transparency and budget credibility.

Subsidy removal will be the most politically difficult component of the programme but is essential to its ultimate success, with Finance Minister Musokotwane telling reporters that the government spends over US$800mn annually on fuel subsidies and national power utility Zesco owing suppliers around US$1bn due to the practice of selling power below cost.

With a strong mandate and momentum post-election, HH is in a good position to push these unpopular reforms through. However, the honeymoon won’t last forever, and many locals have sky-high expectations for rapid positive change, so it is essential for HH to seize on his early momentum to push through difficult reforms before public dissatisfaction can take hold and policy inertia sets in.

The staff-level agreement appeared largely priced in before the announcement, with bonds jumping c1-1.5pts across the curve since Thursday. At 75.8-78.5 cents on the dollar (or 68.7-70.4 once past-due interest is factored out), markets are currently pricing in haircuts of c30% with no further cashflow relief based on an exit yield of 8%, which we think should be seen as the best-case scenario and has clear downside risk, despite the significantly positive policy shift. 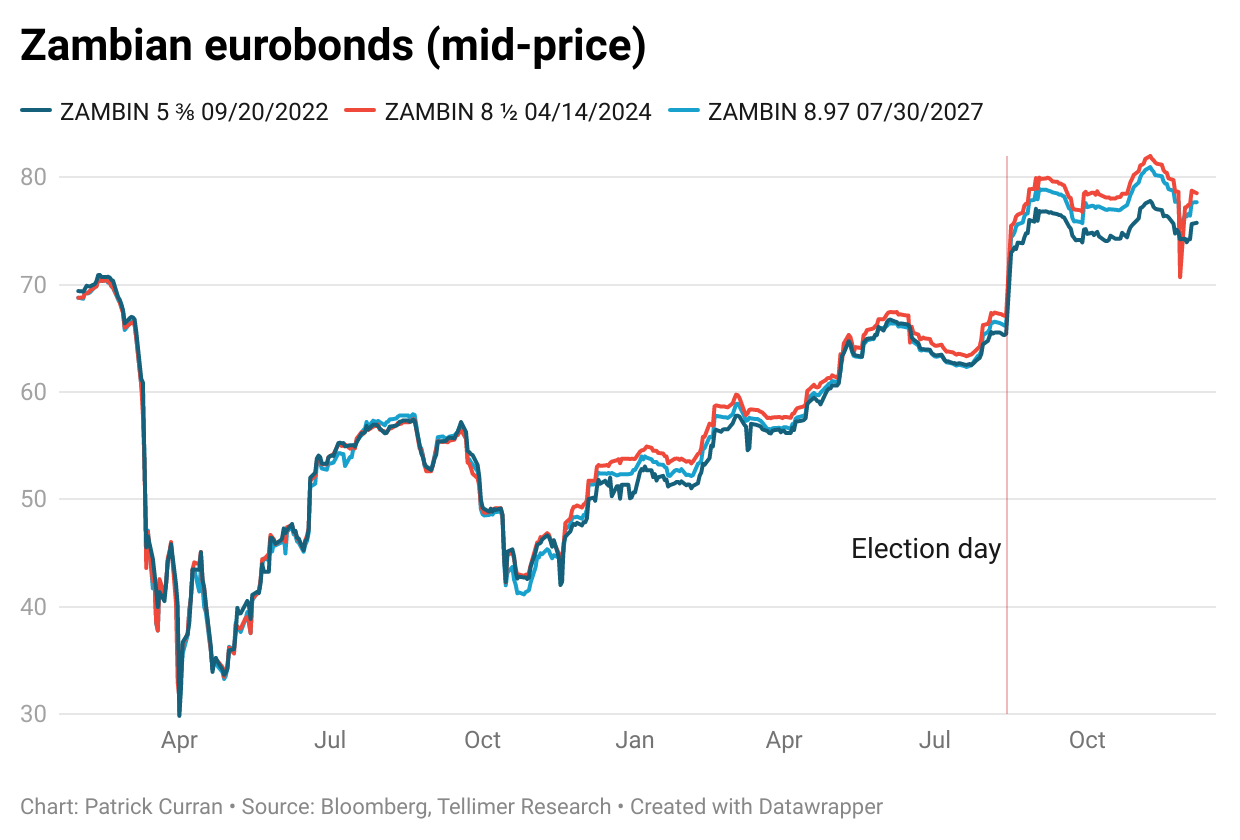 Turning to the economic outlook post-election, international reserves rose to US$2.9bn (4.9 months of import) in September from US$1.4bn (2.6 months of import) in June on the back of the US$1.33bn IMF SDR allocation and purchases of FX by the BoZ. However, the recent softening of copper prices (down c8% from the October peak) and production (down 5% over the first 9 months of the year) could begin to weigh on the BOP, with the current account surplus narrowing to 7.6% of GDP in Q3 (albeit from an extremely high base of 9.8% in Q2) on a 24% rise in imports and 4% rise in exports. 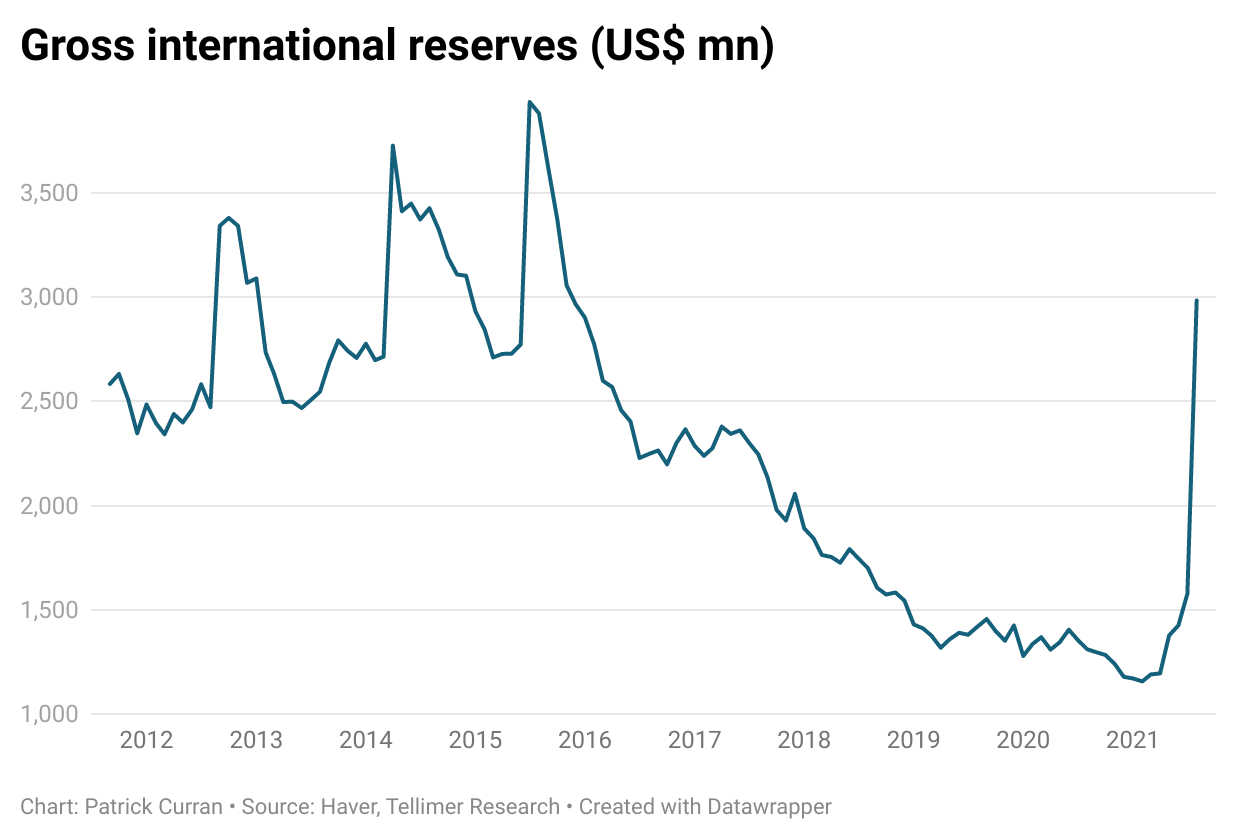 While the Zambia Chamber of Mines says that “The industry is optimistic that the new changes to the mining tax regime announced by the new minister of finance in his 2022 national budget will help spur production after they take effect,” this will take time to pass through to increased production, which will weigh on the BOP in the meantime if it continues to languish. 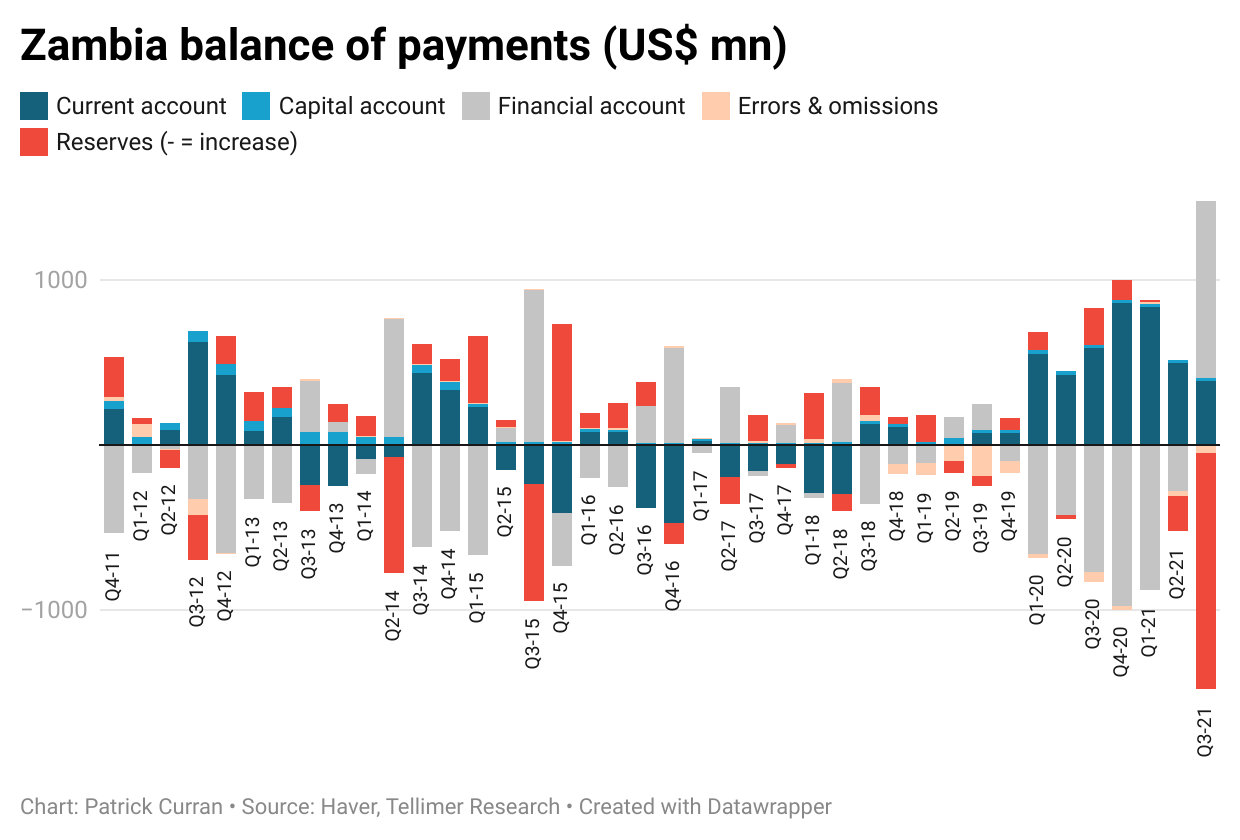 Inflation has started to come down, dropping from a peak of 24.5% yoy in August to 19.3% in November on a moderation in food prices. The BoZ expects inflation to drop to single digits by the end of 2022 and within its 6-8% target range by 2023, with Governor Denny Kalyalya hiking rates by 50bps to 9% in his first MPC meeting since being reappointed on 24 September to facilitate the disinflation process. 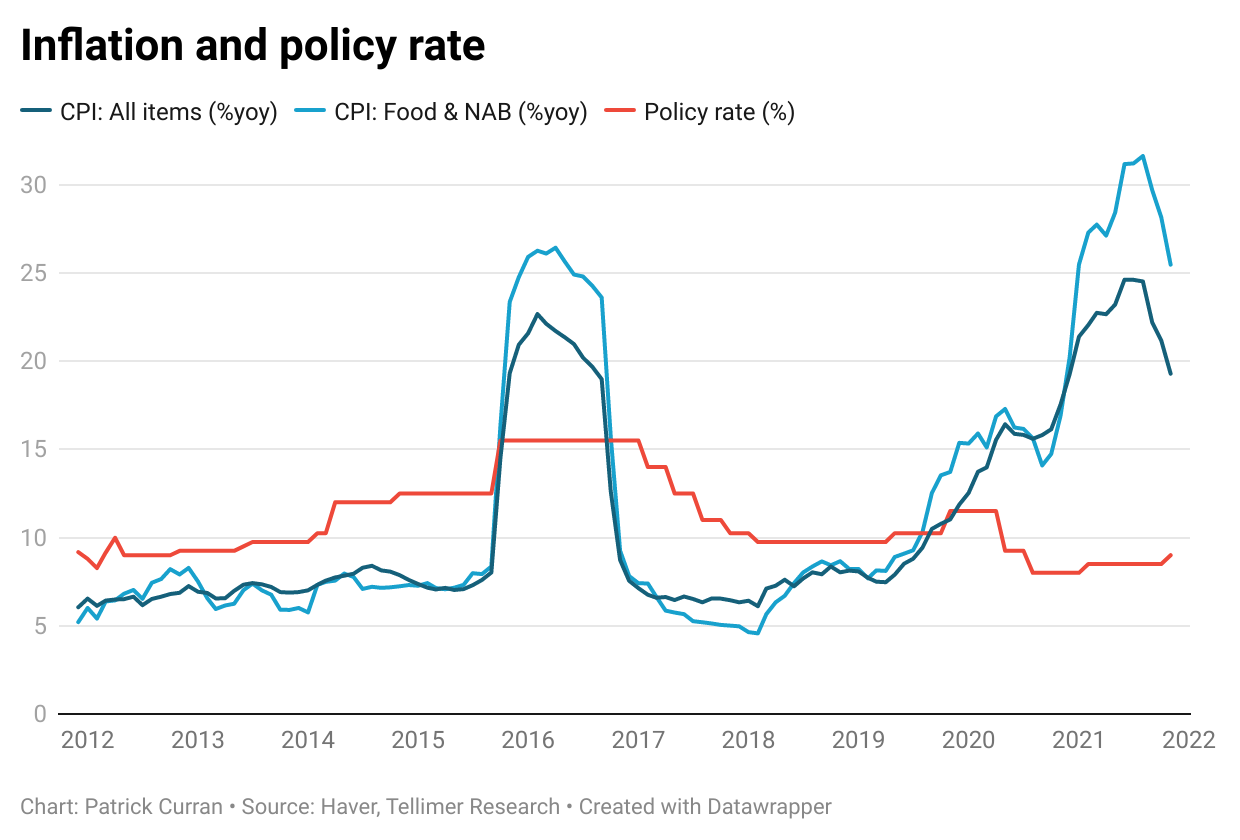 High inflation could keep pressure on the ZMW if it does not decline as projected by the BoZ. There is also an elevated risk of capital flight, with non-resident holdings of government securities rising from 25% to 31% of the total stock in Q3 (equivalent to ZMW49.2bn, or US$2.8bn). While nearly 98% of this is held in bonds, it could lead to BOP pressures if there is a sudden rush to the exits (driven either by a domestic shock or a potential “tightening tantrum” leading to a risk-off environment for EM).

Retain Sell on eurobonds and Buy on local debt

We are still encouraged by the outlook for Zambia under HH, and the relatively rapid move to secure a staff-level agreement with the IMF affirms that the government is on the right track. However, it is still early days for restructuring negotiations, which could cause some delays as we head into 2022, and we still think that the upside is priced in. As such, we maintain our Sell recommendation on Zambian eurobonds, with the post-IMF jump providing another opportunity to lock in profits.

We also maintain our Buy recommendation on 5yr government bonds. Yields have continued to compress from 23.5% when we assigned our recommendation on 10 September to 20.2% currently, pushing up prices by 17.5% over that period. This has been partially offset by ZMW weakness, which is down 7.8% over that period versus the US$ and 9.8% since its peak at the end of August (broadly in line with the performance of the JP Morgan EM Currency Index). 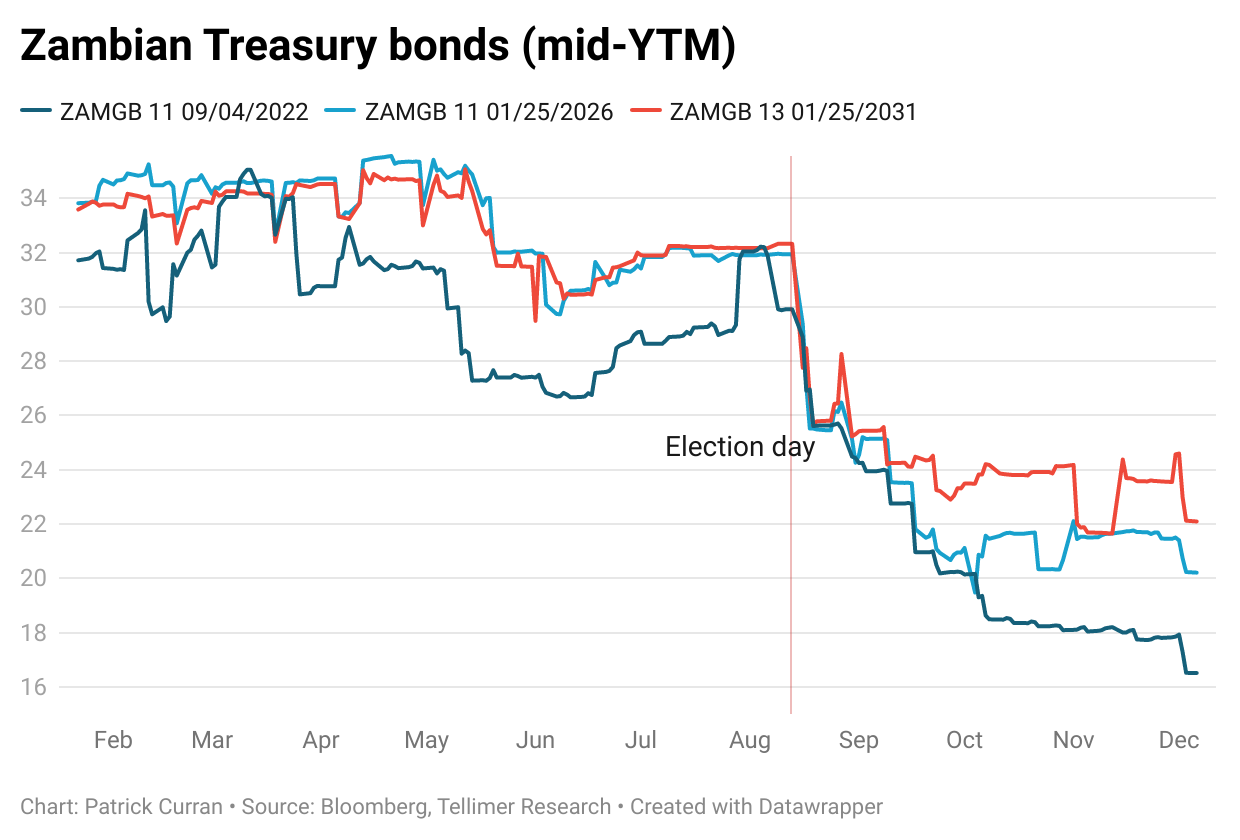 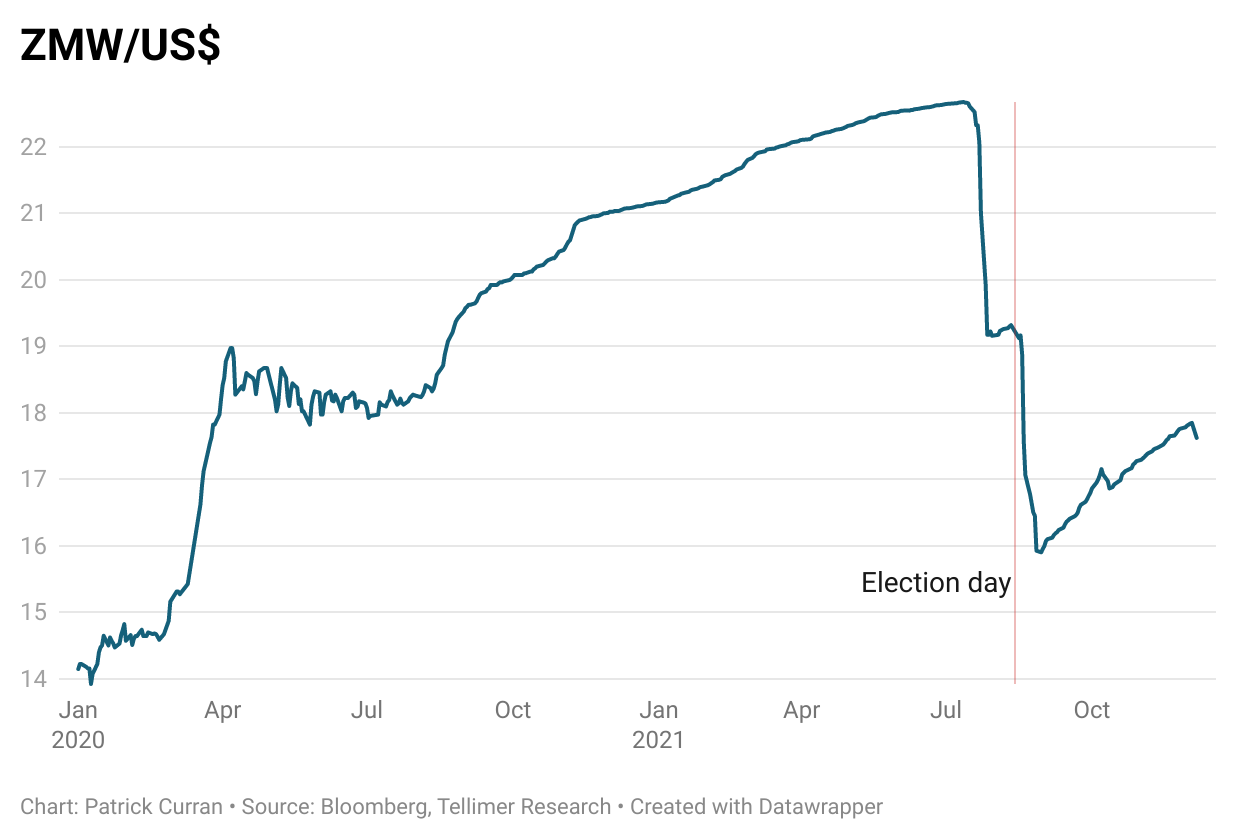 That said, with a strong current account surplus and yields above 20% providing ample cushion against further ZMW depreciation, we think local debt presents an attractive opportunity to buy into the Zambia reform story (albeit less so than August, given a lower current account surplus and yields and greater risk of capital outflows) while potentially avoiding uncertainty over the restructuring (assuming, as we do, that local debt will be excluded).