The data deluge yesterday allowed investors to once again question the speed at which the United States will taper quantitative easing and eventually start raising rates. The data was taken well by the market, Reuters reported that the number of Americans filing new claims for unemployment benefits fell to their lowest level since 1969 last week, which does suggest economic activity is accelerating.

All of this has underpinned the dollar and pressured US Treasury yields to the topside. Both of which are not favourable for emerging and frontier market currencies

In terms of the energy markets, Oil is holding onto its gains following the announcements this week that the US and several other nations would be releasing barrels from their built-up reserves to combat higher fuel prices. The announcements underwhelmed, and now the market waits to see how OPEC+ will respond when it meets for the last time this year next week. If we see the cartel pause its scheduled 400k bar-rel per day increase from January, the market will likely remain in a deficit through the first few months of 2022, keeping prices supported at over $80 per barrel. There are other factors at play here as well, however, as supply constraints in Libya, Nigeria, and Angola are holding back OPEC’s ability to ramp up output, while it may also want to hold back as a hedge against the possible return of supply from Iran.

Egypt: In a statement published yesterday, Egypt’s Cabinet reported that the economy grew by 9.8% in Q1 FY 2021-2022. The July-September reading was the highest growth rate in about two decades and was led by growth in “several economic activities” as the economy recovers from the pandemic. The Telecoms sector grew 16.3%, while manufacturing expanded by 15.2%. Note, despite the negative impact of the coronavirus pandemic, economic growth in Egypt is expected to rebound strongly to 5.6% in the fiscal year 2021-2022, which con-cludes at the end of June 2022.

Mozambique: In a bid to attract much-needed investment into the country’s energy industry, Mozambique will today launch a new oil and gas licensing round. The country’s sixth licensing round will involve 16 prospective areas for sale across the Rovuma Basin, Angoche, the Zambezi Delta, and Save regions, spanning more than 92,000 square kilometers. The National Petroleum Institute, Mozambique’s oil regula-tor, said in a statement on Wednesday that the round is intended to assess the country’s potential for developing its oil resources, as well as to drive economic growth. New drilling activity would bring momentum and cash back to the country’s energy sector.

Nigeria: Finance Minister Zainab Ahmed yesterday said that Nigeria plans to introduce a transport grant in 2022 to offset the planned re-moval of a state fuel subsidy. According to Ahmed, the NGN 5000 per month grant will be paid to as many as 40mn people, and the govern-ment plans to start payments in the second half of 2022. Nigeria’s government has pledged to end fuel subsidies, which cost the govern-ment NGN 904bn in the first eight months of this year. The subsidy currently costs the government about NGN 250bn a month, and the IMF has also called for the government to scrap this costly subsidy.

Uganda: As part of a strategy to make mines a more attractive investment, ease the funding burden for prospective buyers, and quicken plans to revive the project within two years, the Ugandan government has committed to funding its shareholding in planned public-private partnership of the idle Kilembe Copper Mines. The government will own stakes in mines near the border with the Democratic Republic of Congo through the Uganda Development Corporation, which will sell its shares after the mine starts operating. Note, the mine had been idle since 1982, and the government has created a committee to assess the amount of capital needed to restart production.

South Africa: The BER Business Confidence Index remained unchanged in the final quarter of the year, coming in 43.0 as sentiment re-mained subdued following the emergence of fresh headwinds. These included a three-week strike in the steel industry and the resumption of load-shedding. Added to that was the worsening of existing supply chain disruptions and stock shortages. According to the BER, sentiment deteriorated across all sectors barring building. The current reading suggests that the number of respondents unsatisfied with prevailing business conditions outnumbers those that are satisfied. With supply chain disruptions, insufficient stocks, load-shedding, and escalating cost increases set to persist for longer, prospects of a stronger recovery in business confidence at present remain limited. Subdued business confidence could therefore detract from the much-needed foreign direct investment for growth purposes.

Forex: Ethiopian Birr continues to underperform its African peers in 2021

Against a backdrop of a myriad of challenges, the Ethiopian Birr (ETB) has come under notable selling pressure in 2021. For context, the ETB is down by -19.25% on a year-to-date basis and is the worst-performing African currency against the USD. The ETB plunged to a record low just shy of the 48.00 mark on Wednesday, according to Bloomberg data going back to June 1993.

The sustained weakness in the ETB has been a result of heightened fiscal risks, geopolitical uncertainty, the risk of US sanctions, a fragile economy, several rating downgrades, and deeply negative real rates. For context, fiscal risks in Ethiopia have intensified in recent months on the back of rising political uncertainty and civil conflict, which has increased liquidity and default risks. Further dampening sentiment was the US announcement at the start of the month that it had suspended duty-free access to Ethiopian exports. The US deemed Ethiopia to not be in compliance with the eligibility requirements of the African Growth and Opportunity Act because of gross violations of internationally recognized rights. This comes in addition to the US President's signing of an executive order in September threatening economic sanctions on individuals and corporations complicit in prolonging the conflict. S&P flagged that this will have implications for trade access, foreign investment, and economic growth.

Given the above-mentioned challenges, a bearish bias is likely to remain entrenched on the ETB. Therefore, we expected the notable underperformance to persist in the near-to-medium term 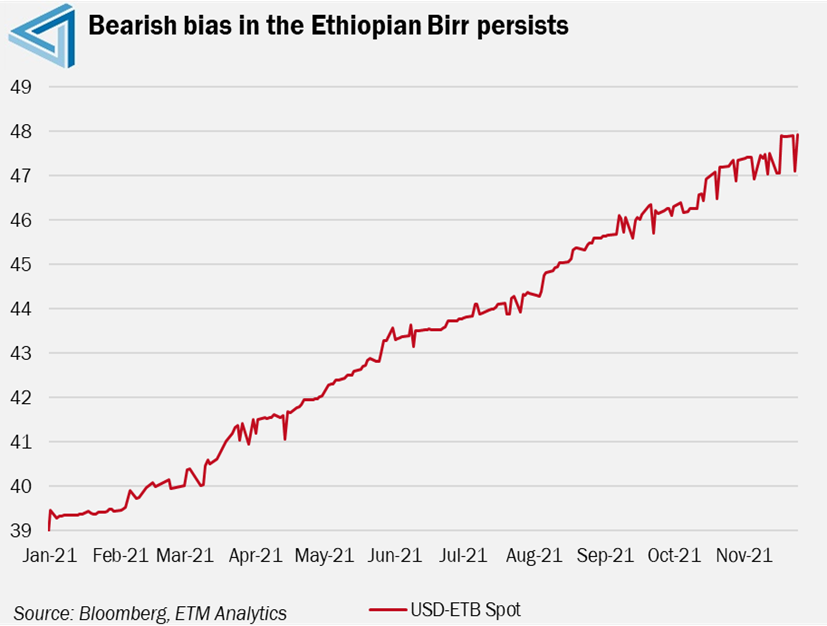 In other Nigerian news, Lagos plans to borrow N253bn to finance its 2022 budget according to Governor Babajide Sanwo-Olu. This followed the governor tabling a budget proposal of N1.388trln, with the government to borrow in both domestic and international markets, but well within the government's sustainability parameters. Currently, total debt stands at N507.377bn, implying that the extra borrowing for the 2022 budget will boost the overall debt numbers considerably.

Kenya's National Treasury report showed that gross public debt had risen to KES 8.0 trln with public debt rising 12% for the year ending 30th Sep. According to the National Treasury report, gross domestic debt rose 13% to KES 3.94trln, and external liabilities rose by 11% to reach KES 4.06trln. As with most other countries on the continent, the pandemic induced lockdowns and restrictions have played havoc with global and indeed domestic demand, such that normal revenue collections have fallen well short of what's required for a more balanced fiscal position

The Bank of Zambia (BoZ) yesterday raised its key lending rate by 50bps to 9.0% to help bring down stubbornly high inflation, with consumer prices only seen as falling back within the bank’s target range in 2023. BoZ Governor Denny Kalyalya said that inflation remains elevated despite showing signs of slowing down, and that hike, the first since February, was aimed at bringing inflation back to target but also took into account the need to continue supporting the economy and maintaining financial stability. Inflation in Zambia is expected to average 15.0% next year and 9.3% in the first three quarters of 2023. Kalyalya also said that the BoZ also took into account into account negative real Treasury-bill rates in its decision to tighten monetary policy. Yields on benchmark one-year Treasury bills have more than halved to 12% this month from 25.8% in January.

On the growth front, the BoZ forecast the economy to expand by 3.3% this year and by 3.5% and 3.7% in 2022 and 2023, respectively. The BoZ also urged the government to implement fiscal reforms to complement an objective for low and stable inflation. The increase adds to a half-a-percentage point hike in February and further reverses some of the 350bps of cuts announced last year to shore up the economy from a coronavirus-induced slump. Furthermore, the hike signifies that the BoZ is moving tame inflation even as the economy is expanding at a slower than expected pace.