Zambia: Budget delivers on key reforms but targets will be hard to achieve

Finance Minister Musokotwane delivered the maiden budget of President Hichilema’s "New Dawn Administration" on 29 October. On its face, it seemed to check all the necessary boxes. Key macro targets include:

It also highlights some key policy objectives, some of which will be instrumental in moving Zambia closer to securing an IMF programme and debt restructuring, including:

Musokotwane hopes that this will pave the way for the government to reach an IMF agreement by the end of November and conclude the debt restructuring in Q1 22, pledging to "work towards a consensual debt resolution" and "adhere to the principles of transparency and equitable treatment of all creditors."

While we think this is ambitious, the latest budget represents a material step in the right direction and will set the stage for constructive negotiations with the IMF and bondholders. Stripping out external amortisations (which the MoF misleadingly includes as above-the-line spending rather than below-the-line financing), spending is projected to fall 3% in nominal terms (or 22% in real terms based on the IMF's 19.2% average inflation forecast) and drop from 36.2% of GDP to 28.3% of GDP, an undoubtedly heavy fiscal lift. This will be offset by revenue reductions given the cost of the tax relief outlined in the budget, with a 4% nominal rise in revenue & grants (or 15% real drop) translating into a reduction from 25.8% to 21.6% of GDP. 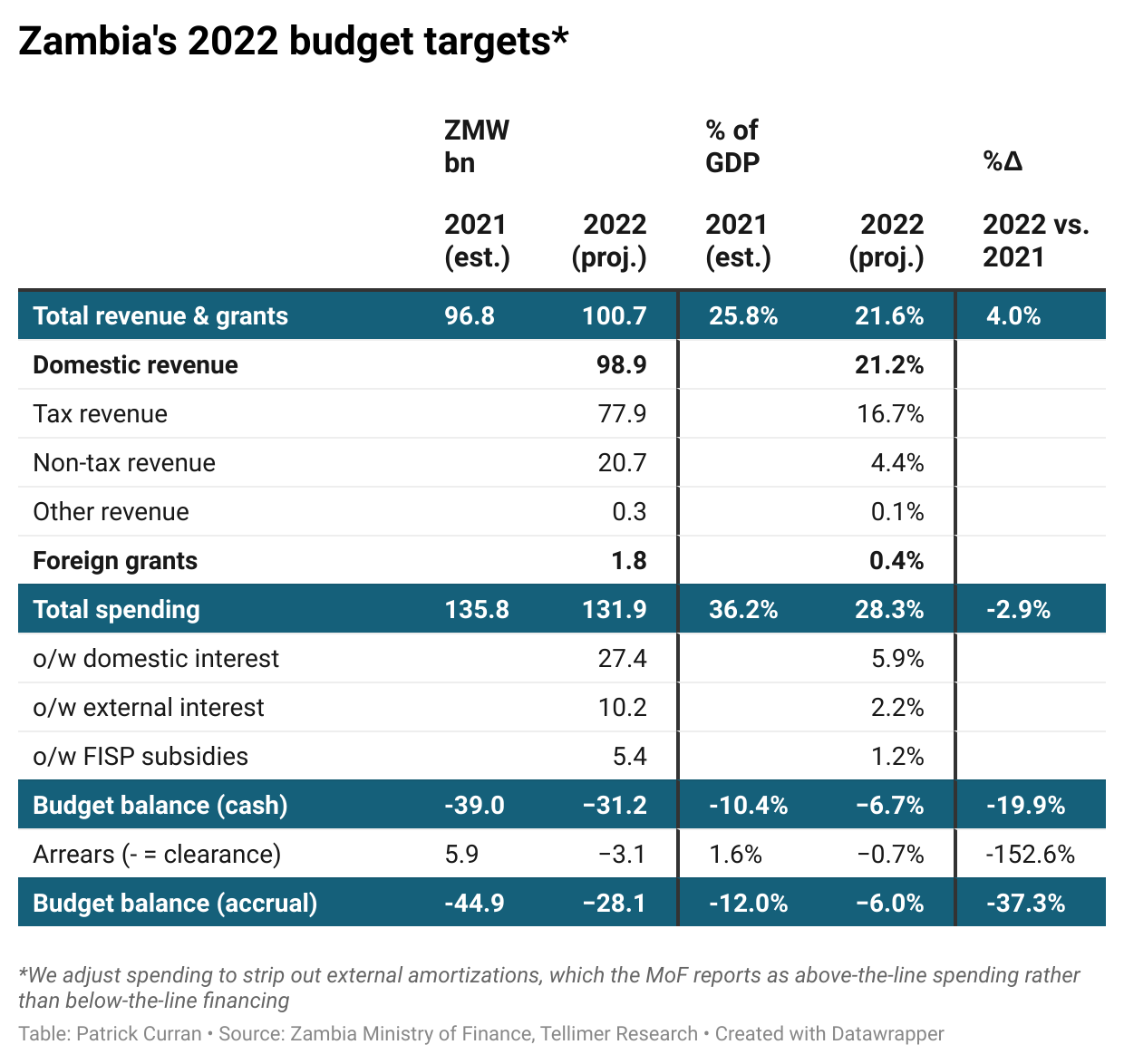 However, it is worth noting that any changes from 2021 are somewhat distorted due to the unusually high base for both revenue and spending. Through September 2021, revenue and grants exceeded the target by 51% due largely to high copper prices, while spending (including amortizations) was 26% above target despite the suspension of debt payments due to above-target spending on agricultural and fuel subsidies, domestically financed capital projects, and elections.

Altogether, this pushed the cash deficit to 10.4% of GDP, above the 9.3% target but below the 12.9% outturn in 2020. However, this is despite the large reduction in interest payments due to the ongoing debt default. With total interest payments (domestic and foreign) of 5.6% of GDP in 2020, the underlying deficit likely deteriorated in 2021 when adjusted for the impact of the default on interest payments, despite surging copper prices and the weak base from 2020.

In addition, the size of the planned fiscal adjustment in 2022 is even larger when adjusting from cash to accrual terms. Adding the 1.6% of GDP of arrears accumulated in H1 21 (which could be an understatement given the likelihood of further buildup in H2 21) and subtracting out the planned clearance of 0.7% of GDP of arrears in 2022, the budget deficit is actually targeted to halve from 12% to 6% of GDP in 2022 in accrual terms. This highlights the need for a heavy fiscal lift, which has been ambitiously outlined in Friday's budget, but which will be extremely difficult to achieve.

Looking at the impact on Zambia's debt stock, external debt rose to US$14.71bn in September (including US$12.99bn central government, US$1.56bn guaranteed, and US$165bn non-guaranteed, but excluding US$1.2bn principal arrears). However, given the surging kwacha and high inflation, the IMF projects a decrease in the total government debt stock from 129% of GDP in 2020 to 101% in 2021, providing a much more favourable starting point for the restructuring.

However, it is notable that the IMF WEO sees public debt rising to 107% of GDP in 2022 with a budget deficit of 7.8% of GDP, which implies that at a slightly better 6.7% of GDP target debt is still likely to rise next year to 106% of GDP. It is also notable that the 2022 budget includes ZMW51.3bn of spending on external debt service (ZMW41.1bn amortisations, ZMW10.2bn interest), which gives an early signal as to the profile of cash flows that the government is prepared to withstand in the restructuring.

We also note some interesting comments over the weekend, with Finance Minister Musokotwane saying that Zambia plans to borrow US$750mn next year to refinance its US$750mn eurobond maturity in September. It is unclear to us what is meant by this, with Zambia still in the process of restructuring its debt and any such outcome likely to include a maturity extension that pushes any commercial principal payments beyond the horizon of the associated IMF programme.

It is hard to see how Zambia can obtain new money to refinance while in default, and any such operation could also raise issues of inter-creditor equity with holders of the other two bonds. It is possible that the creditor committee has proposed a new money element to the restructuring, but it is unclear to us how this would work in practice. We may receive more clarity in Musokotwane's virtual presentation to creditors scheduled for tomorrow.

Overall, we see last Friday's budget as a positive step in the right direction, but lots of heavy lifting is still required to deliver on its ambitious targets. With the Zambia 24s closing at US$80.2 on Friday (albeit with 17pts of accrued interest), we still think bonds have already largely priced in the upside from an optimistic restructuring scenario. As such, we retain our Sell recommendation, and see the strong bond performance as an ideal opportunity to lock in upside and take profits.