2021 Themes: Yield opportunities in a world of low rates

The Covid-19 crisis and associated economic contraction have prompted a notable shift in the monetary policy outlook in developed markets, which we think will have important ramifications for emerging market assets in the coming years.

In September, the Fed shifted to average inflation targeting and indicated that it expects to maintain rates at the current 0.00-0.25% level until inflation is on track to exceed its 2% inflation target “for some time.”

The FOMC’s dot plot indicates that only one member expects a hike by 2022 and only three members expect a hike by 2023. This compares with median expectations of a policy rate of 2.25-2.5% by 2022 at the same time last year.

Meanwhile, the ECB is also expected to keep rates at the zero lower bound for the foreseeable future and does not plan to begin unwinding its US$1.35tn asset purchase program until at least the end of 2022.

With central bank asset purchases reaching US$7.5tn globally so far this year, the world is awash with liquidity, driving a major rally across asset classes since March (with the S&P 500 now up c60% and trading above its pre-Covid peak and the 10-year US treasury yield below 1% versus c2.7% at the beginning of the year).

Markets are now pricing in expectations of ‘low for long’ interest rates for the foreseeable future, with the market-implied policy rate rising marginally to c0.7% by 2023 in Canada and c0.3% in the US, but staying near or below zero over the next three years at the ECB and Banks of England Japan. The Reserve Bank of Australia has also said that it could keep rates at zero for as long as five years. 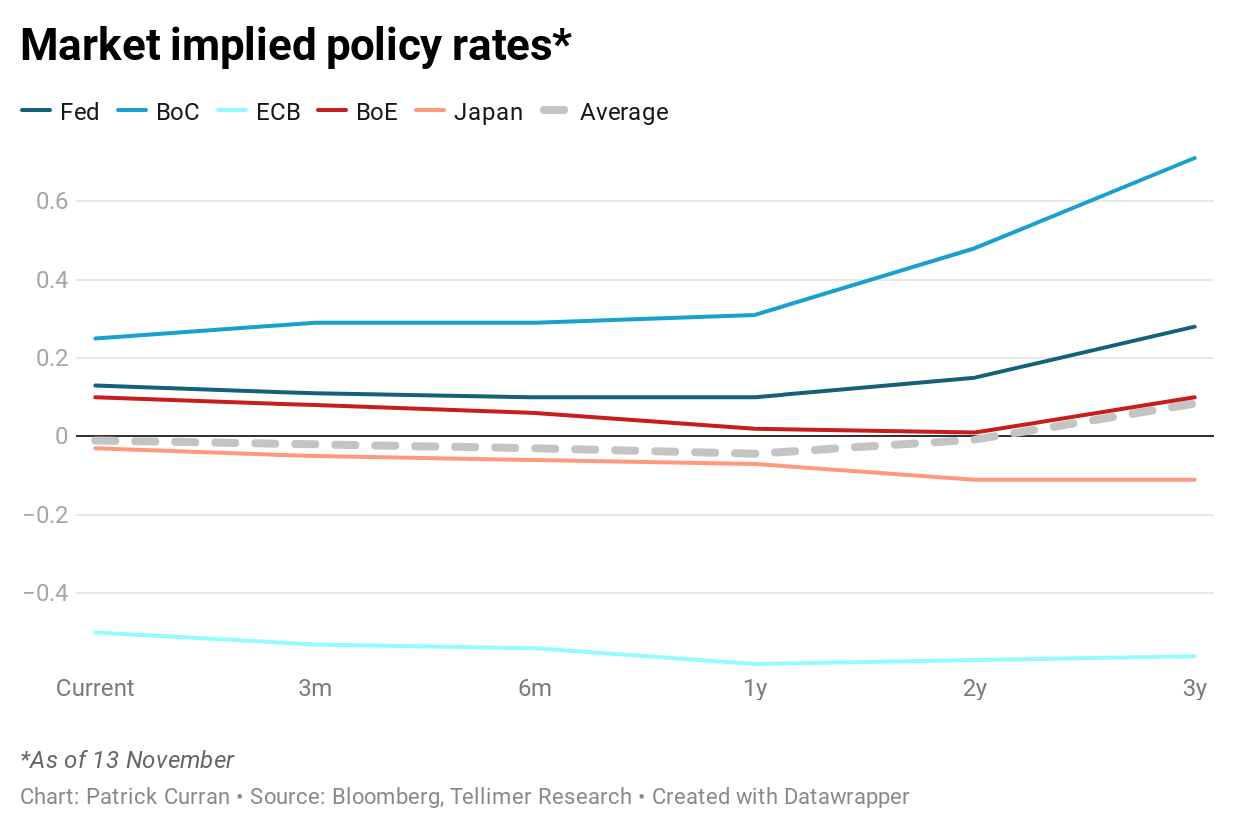 This policy shift has spurred a rise in the global stock of negative-yielding debt from US$11.2tn at the beginning of the year to a record US$17.1tn at the beginning of November (though it has since moderated a bit). Meanwhile, JP Morgan estimated in October that the stock of debt with negative real yields has reached US$31tn – 76% of all outstanding debt in the developed world and 17% in EMs. 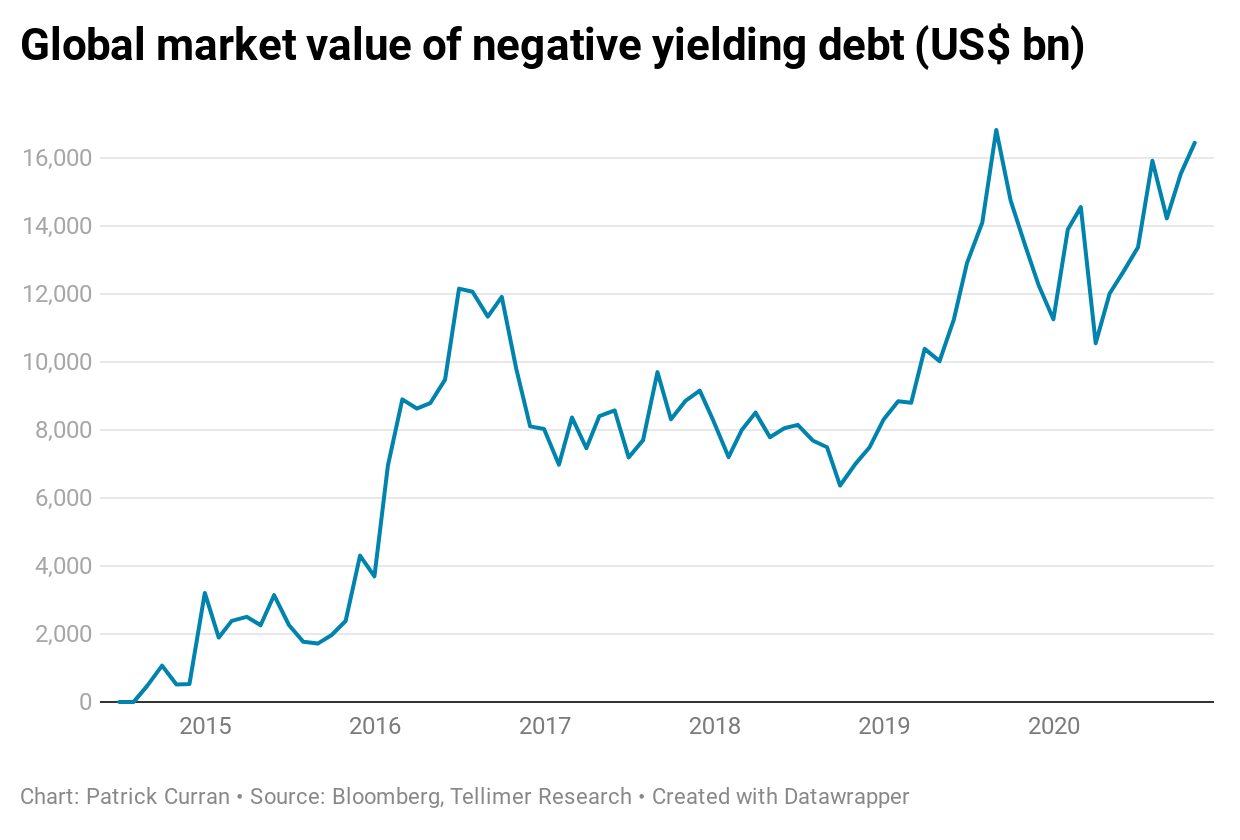 In an environment characterised by prolonged negative real yields in developed markets, the search for yield is almost certain to intensify in the coming years. And, from that perspective, EM fixed income assets are likely to be a major beneficiary.

EM fixed income has historically been one of the top-performing assets on a risk-adjusted basis. Over the past 25 years, the EMBI has returned an average of 10.3% annually versus 8% for US high yield, 6.4% for US corporates and 5.2% for US Treasuries (with corresponding Sharpe ratios of 0.83, 0.70, 1.06 and 1.15, respectively). But, after a four-decade rally in US rates, yields on benchmark 10-year bonds are below 1%, which may leave little room for further price appreciation. Rates are even lower in other DMs, reaching c25bps in England, c0bps in Japan and -c50bps in Germany.

If fixed income investors have any hope of replicating past returns, they will have to do so by investing in high yield corporates and in emerging markets sovereigns and corporates – although possibly accepting lower credit quality. While developed market debt promises to return near or below zero in the coming years (especially if massive stimulus fuels inflation and leads to rate hikes), the JP Morgan EMBI trades at a spread of c350bps over US government debt and is still trading c70bps wide of its pre-Covid lows even after the post-US election rally (although it is unclear if it can return to those levels given heightened fundamental risks in the post-Covid environment). 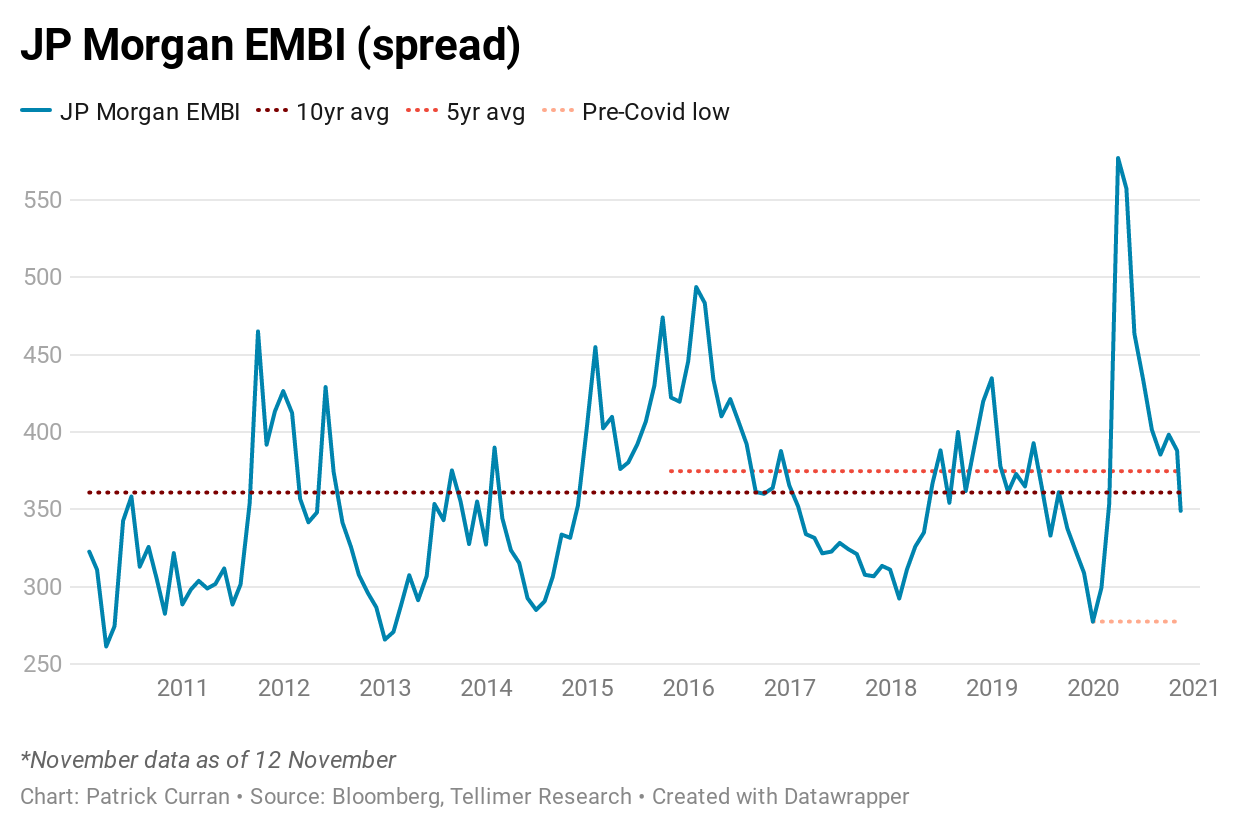 Moreover, with the Fed vowing to continue purchasing Treasuries at “at least the current pace” of US$80bn per month over the coming months and a projected budget deficit of a record US$3.3tn in FY 20, potentially looser policy under the incoming Biden administration, and surging Covid cases as the US heads into the winter months, consensus seems to be for further dollar weakness ahead.

Although the US$ has depreciated by c2.5% ytd and c11% since its March peak, the dollar REER is still c12% above its 50-year average, c14% above its 25-year average and c11% above its 10-year average. This could provide a favourable backdrop for investment into local currency EM debt as well, which has lagged the rally in EM hard currency debt this year.

EM central banks have generally followed the Fed by cutting rates aggressively this year, so yields on local government debt in many EMs are also lower than they were pre-Covid and, in some cases, are actually lower than hard currency yields (including Nigeria, Sri Lanka and Zambia).

However, demand-side inflationary pressure has also eased in many EMs, meaning real rates in some countries have remained stable or even increased. There are still a number of EMs with attractive real rates, and, against the backdrop of ongoing developed market monetary and fiscal stimulus and potential dollar weakness, domestic debt in these countries could also perform well. 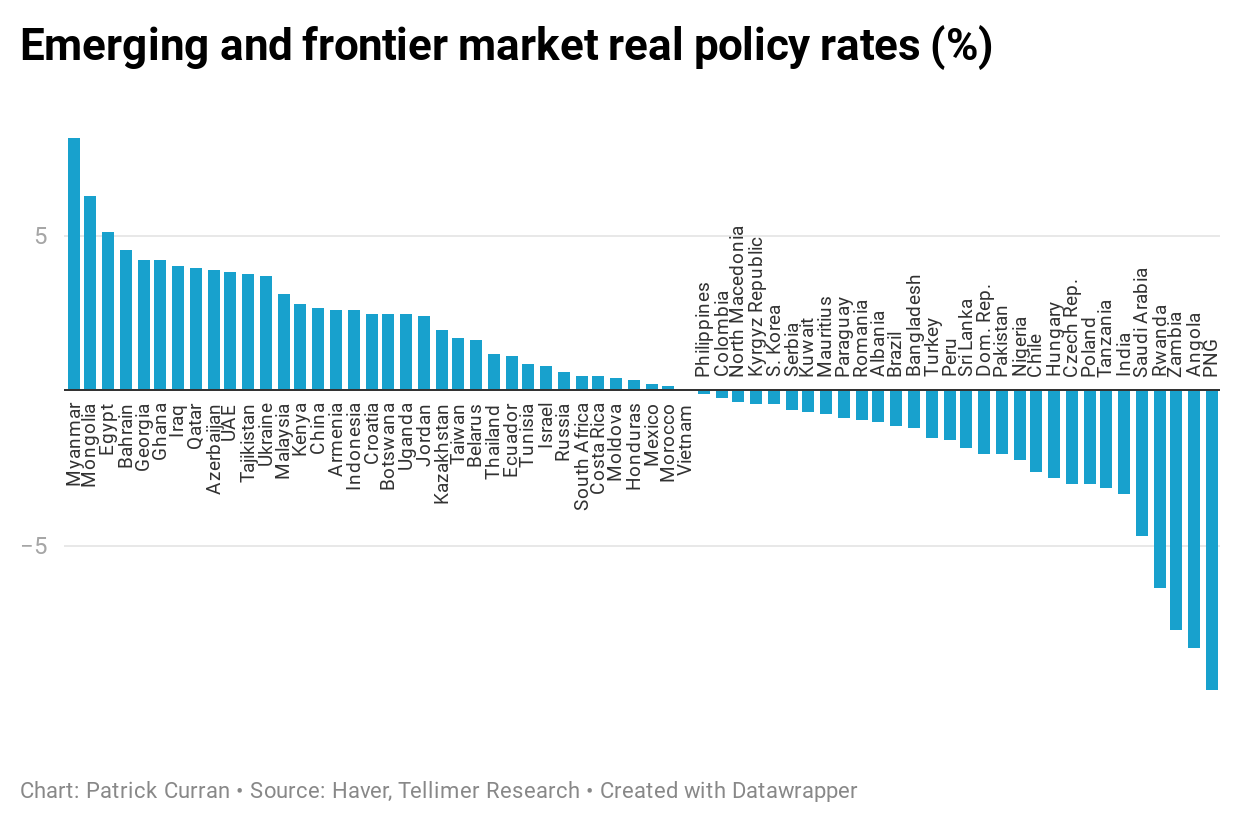 If the low for long interest rate environment in developed markets continues as expected, we think the global reach for yield will continue too. Against this backdrop, EM assets as a whole should be set to benefit, albeit with an increasing need for differentiation amid diverging economic and fiscal outlooks.