Yalla's short sellers are barking up the wrong tree

Yalla Group, the MENA-focused social network company, faced two damning reports from short sellers on the same day, and the stock fell 7% to its lowest level since 19 January 2021. Year-to-date, the stock is up 19%. 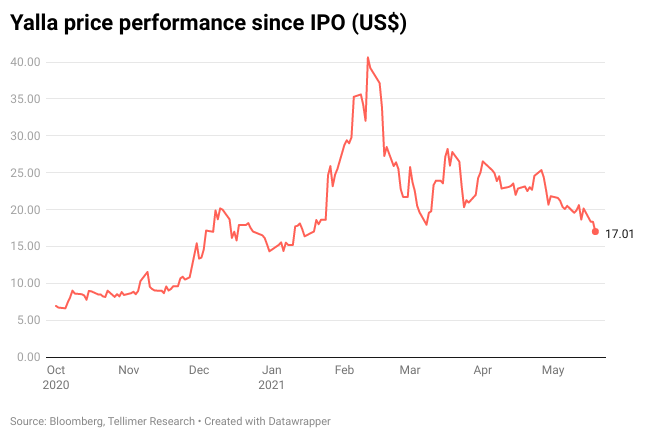 Swan Street Research issued a 31-page report on Wednesday. Its accusations are as follows:

On the same day, Gotham City Research compared Yalla to Let's Gowex (now bankrupt) and Luckin Coffee (filed for bankruptcy) in a series of tweets.

Yalla responded to the accusations today, saying that the "short attack reports contain numerous errors and distorted, misleading and unsubstantiated claims" and that the company firmly denies any allegation or claim suggesting that it did not provide true and accurate public disclosure about its business and financial performance.

Yalla was founded in 2016 by a Chinese group that has operations in the UAE and China. The company’s platform has 14mn users in the UAE, Saudi Arabia, Qatar and other MENA countries. We view the company as the "Facebook of Arabia".

YALA US listed on the NYSE on 29 September, raising US$149mn in the issue. The company makes money from the sale of virtual items and premium membership on its platform. It is the largest voice chat operator in MENA in terms of revenue, according to consultants, Frost & Sullivan.

What is our take?

We have covered YALA US without a formal recommendation since November. We have interviewed the management and have surveyed its market.

The Gotham City Research tweet, meanwhile, does not cite any evidence.

The reasons for our optimism are as follows:

But risks cannot be ignored

We see major risks in Yalla, including corporate governance issues: