The Wuhan virus contagion is unprecedented in its speed and range. In a matter of weeks, it has spread to over 20 countries and claimed more than 130 lives.

There is solace in the bounce that followed similar outbreaks

Performance of the MSCI World index after previous outbreaks 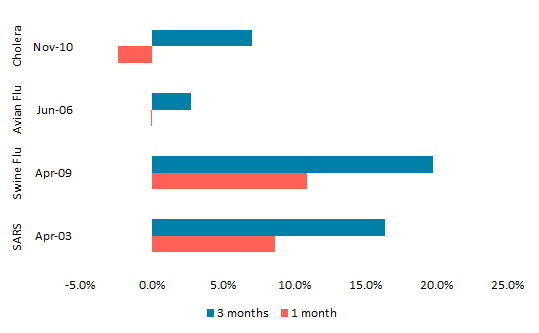 The MSCI Asia ex-Japan Consumer Discretionary fell as much as 12% immediately after the SARS outbreak. It rallied by 2% in one month after SARS and by 18% in three months. 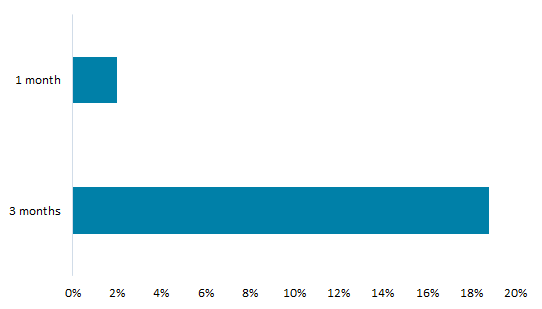 Apart from seeking comfort from stockmarket indices, investors might take a cue from French literature. Albert Camus’s 1947 novel The Plague is about an Algerian town called Oran that was quarantined like Wuhan. Human smugglers profit from the desperate occupants of Oran, one of whom pays 10,000 Francs to be reunited with his wife.

Today, the shares of American biotech companies with lofty plans for a vaccine are rising like the fortunes of the smugglers in Oran. Moderna (MRNA US), Novavax (NVAX US), and Inovio Pharmaceuticals (INO US) have risen as much as 80% in the past two weeks. The fanfare for these stocks is baffling to us. They have not produced a vaccine for the virus, but have merely stated an intention to research.

The Food and Drug Administration (FDA) has not approved these companies' products, and it would take months before a vaccine could be available.

The Asian meat sector is viewed as the progenitor of the crisis. The Wuhan virus is said to have originated from an urban “wet market” – markets where animals are freshly slaughtered rather than chilled.

There is the hint of panic selling in some cases, as investors fear a consumer slowdown. The implementation of restrictions on meat sales, particularly in "wet markets", is also a possibility.

We think that early containment of the virus cannot be discounted. The fatality rate is 3%. SARS killed about 10% of the c8000 people that were infected. Public health standards have improved in the last 17 years, though outbound Chinese travel is much higher.

Chasing the biotech stocks and ignoring the Asian meat stocks would be a mistake, in our view. The biotech gains can melt away, once the virus fears recede. As SARS, Avian Flu and Swine Flu show, the market may have more than shrugged off these losses in three months.

We have a Buy recommendation on Charoen Pokphand Foods (CPF TB, TP THB38.0). We do not have active coverage on the stocks mentioned in this report.