The USD has regained its footing this morning, paring back almost all of yesterday’s losses after more hawkish Fed speak overnight. The Fed’s Barkin said that the central bank should raise interest rates as fast as it can without causing undue harm to financial markets or the economy. While Barkin is a non-voting member this year, the hawkish comments set the stage for Fed Chair Powell’s testimony later today, which should reaffirm the Fed’s commitment to reining in sky-high inflation. With the exception of the Japanese yen, G10 currencies are a sea of red this morning, with the likes of the New Zealand dollar losing more than 1% at the time of writing. As we head into the European open, emerging market FX is also weaker. The focus for currency traders will be centred on Fed Chair Powell’s testimony and the path of monetary policy in the US. Hawkish affirmations from the Fed chair should keep USD bulls at the helm.

Egypt: In a poll conducted by Reuters, policymakers at Egypt's central bank are set to vote in favour of raising the overnight deposit rate by 50bp this week as they seek to combat rampant inflation. The median forecast in a poll involving 17 analysts is for the central bank to raise deposit rates to 11.75% on Thursday. Meanwhile, the lending rate is predicted to rise by a median 25bp to 12.50%. Given that the central bank has already hiked by a total of 300bp, it is worth flagging that risks exist for the central bank to pause at the next meeting to assess the impact of these hikes while the impact of the upcoming quarterly fuel price adjustment still needs to be taken into consideration.

Egypt: Saudi's Minister of Commerce Majid al-Qasabi yesterday announced that Egypt and Saudi Arabia would sign four agreements valued at $7.7bn. As per the signed agreements, the investments will be injected into various fields, including infrastructure, renewable energy, and green hydrogen projects, pharmaceuticals, and e-commerce.

Kenya: Ahead of the August polls, Martha Karua, running mate of presidential candidate Raila Odinga has pledged that the alliance led by Odinga will come down hard on corruption if they win. Karua, who would be Kenya's first female deputy president if elected, said Azimio's priority once in power would be to stamp out corruption, which is estimated to cost the government a third of its budget every year, about KES 800bn ($6.83bn). Karua added that the funds lost each year would be enough to fund her coalition's plan to offer direct monthly support to 2mn of Kenya's poorest people. The August election in Kenya is seen as a litmus test for stability and democracy in the country. Two of its last three elections were characterized by violence amid disputes over alleged vote-rigging. Since Karua's selection as his running mate, Odinga has overtaken Ruto in opinion polls. A Radio Africa poll, published on June 13, put Odinga ahead, with 44.6% of voters favouring him against 38.9% for Ruto.

Namibia: Chairperson of National Petroleum Corporation of Namibia Jennifer Comalie yesterday said that Namibia expects its biggest oil discoveries since independence to help double its economy by 2040. Recall that TotalEnergies SE said in February that it had made a "significant" oil discovery off the coast of Nambia, three weeks after Shell Plc announced a find off the southwest African nation. Without providing a timeline for production, Comalie said that "at peak, these two discoveries could bring $5.6bn to the economy." Namibia is hoping the discoveries boost its revenue and create more job opportunities.

Nigeria: The Supreme Court has upheld a lower court ruling that is preventing Shell Plc. from selling assets in Nigeria until a dispute between the company and a Niger Delta community over a 2019 oil spill is resolved. In March, the High Court barred Shell from any asset sale in Nigeria until a decision was reached on the dispute. Eighty communities in Rivers state were awarded $1.95bn compensation for an oil spill they blamed on Shell and which damaged their farms and waterways. The Supreme Court ruling says all parties should "maintain the status quo," meaning there should be "no bids, no sales until the hearing of applications which has been fixed for November 3, 2022", according to a lawyer representing the delta communities. As part of its global drive to reduce its carbon emissions, Shell wants to sell its stake in Nigeria's onshore fields, where it has been active since the 1930s.

South Africa: The ZAR had the wind at its back on Tuesday, appreciating 0.90% against a broadly weaker USD amid a tentative improvement in market sentiment. Investors should be cautious of reading too much into this, however, as there is still significant uncertainty over the global economic outlook and how aggressively the likes of the US Federal Reserve and other major central banks will need to tighten monetary conditions to ease inflationary pressures. Locally, the CPI reading today will hold focus, CPI was unchanged in April; however, expectations are for an acceleration to have occurred in May, due to the impact of elevated oil and food prices globally.

The World Bank, in a recent report titled "Nigeria Development Update (June 2022): The Continuing Urgency of Business Unusual", has called on authorities in Nigeria to adopt a more flexible exchange rate system amid favourable external conditions. According to the World Bank, oil prices being the highest in nine years provides Nigeria with an opportunity to adjust the exchange rate reflective of market dynamics. The bank added that allowing further gradual adjustment in the IEFX rate where the Central Bank of Nigeria (CBN) manages the price would help eliminate misalignment and alleviate persistent FX pressures. 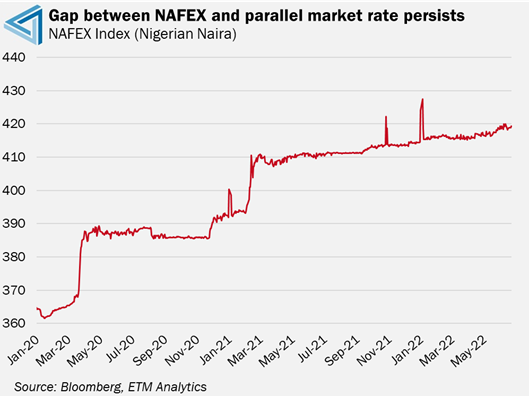 While the CBN in May last year took steps to unify multiple exchange rates by adopting the IEFX window rate as its official exchange rate, the World Bank noted that several different widows still exist and the parallel market premium continues to climb over the official NAFEX rate, reaching 39% at the end of Q1. According to the World Bank, "the benefits of a more effective exchange rate management, with a view toward a unified and market reflective exchange rate are more significant than in previous years." Meanwhile, clarity on Nigeria's exchange rate policy and transparency in its management is deemed necessary to attract more significant capital inflows, including foreign direct investment.

It remains to be seen whether authorities in Nigeria heed the calls for a more flexible exchange rate by the World Bank. A more flexible exchange rate system would reduce uncertainty, enhance liquidity which is a major challenge Nigeria has had to contend with, remove distortions and inspire investor confidence. We see a considerable risk that there were be another sizeable devaluation in the naira within the next few months.

The aggressive monetary policy tightening by major central banks triggered a significant outflow from bond markets last week as traders priced for a steep cycle of interest rate hikes as inflation across the world continues to run hot. Recall that the Federal Reserve delivered a 75bps rate hike, the biggest increase in almost three decades. The aggressive monetary policy tightening from the Fed and other major central banks continued to drive investors out of bonds last week.

This is evident in the latest weekly emerging market exchange traded funds flow data published by Bloomberg on Monday. Specifically, outflows from US-listed emerging market ETFs totalled $534mn in the week ending June 17, bringing to an end four weeks of inflows that reached $3.87bn. This was the biggest outflow since November. A breakdown of the data showed that bond focussed ETFs were responsible for the net outflow last week. Last week, bond funds fell by $574mn, while equity-centric ETFs expanded by $40mn.

The hawkish shift from major central banks and shift higher in global interest rates have driven up debt servicing costs and made it significantly more expensive for African sovereigns to refinance themselves. In some instances, African government bond yields have more than doubled over the past 12 months, reflecting the higher lending costs and deterioration in investor risk appetite as mounting recession risks and the ongoing war in Ukraine continue to push investors into haven assets. As pointed out in recent commentary, near term risks for African bonds remain skewed firmly to the upside. That said, the next few months will present some excellent buying opportunities for investors before the global monetary policy tide turns and the appeal of bonds improves.

Egypt has benefitted handsomely from its attractive carry trade in recent years as international investors flocked to the Egyptian debt market to take advantage of the substantial yields on offer. However, Egypt’s once-lucrative carry trade has diminished this year as inflation soars and sentiment towards the country deteriorates, given its sensitivity to the situation in Ukraine. Note that Egypt is highly dependent on food imports from Ukraine and Russia. Moreover, tourism receipts have plunged as Russian arrivals fell. 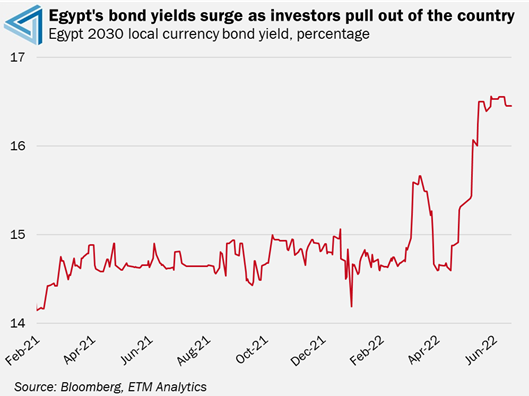 Egypt’s seen some $20bn in foreign outflows this year as investors in local debt exited. The mass exodus of foreign capital, together with the significant devaluation in the currency, has pushed Egyptian local currency bond yields significantly higher. For context, Egypt’s 2030 local currency bond yield is trading at around 16.45%, which compares to its year-to-date lows of 14.19% at the start of the year. With Egyptian portfolio flows under pressure, the country is looking to decrease its reliance on the carry trade.

Speaking yesterday, Finance Minister Mohamed Maait said Egypt should focus on attracting more foreign direct investment and boosting exports. Egypt saw FDI drop 12% in 2021 but remained one of the continent’s main recipients, according to the latest report from the United Nations Conference on Trade and Development. Egypt’s Gulf allies have pledged more than $22bn in deposits and investments since the war began.

The Finance Minister expressed concern over the impact of high interest rates on the debt servicing costs for Egypt, one of the Middle East’s most indebted nations. Egypt has been in talks with the International Monetary Fund for assistance, with recent discussions focusing on a possible 3- to 4-year program. While the timing of an IMF program is unclear, a new program would provide much-needed relief for the heavily indebted country.