I grew up in the UK in the early 1980s when families watched the same television programmes, on the same television set, usually in the same room of the house. And where news bulletins punctuated every day at home – newscasters in that era were as well known by kids as TikTok stars today.

Some events covered by television, merely the BBC and ITV at that time, stick in the memory – the Charles and Diana Royal Wedding, the race riots in Brixton and Toxteth, the Falklands War, as well as Botham's Ashes cricket, John McEnroe's 'chalk dust on the line' in tennis, Dennis Taylor's World Championship victory in snooker and Bob Geldoff's LiveAid.

I would also include the then Prime Minister Margaret Thatcher's showdown with the trade unions, personified, or, looking back, perhaps vilified, in the figure of the President of the National Union of Mineworkers, Arthur Scargill.

The protests at Hon Hai Technology's Foxconn factory in Zhengzhou, China, this week took me back to the image of uniformed police confronting striking miners – thanks to the release of papers previously restricted by the official secrets act, we now know that there was a lot of covert, secret policing in the UK of the 1980s.

Anyway, back to the present.

The Foxconn riot prompted me to have a look at the current state of workers' rights globally.

I looked at the International Trade Union Confederation 2022 index of government or employer violations of workers' rights – eg rights to strike, collectively bargain, form a trade union or engage in free speech and assembly. 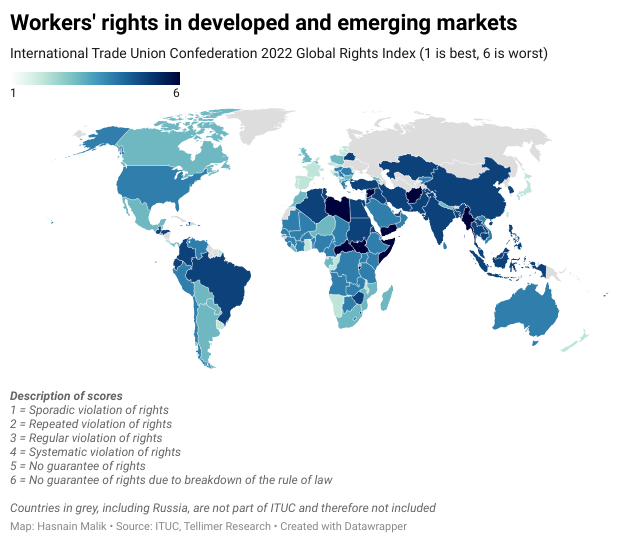 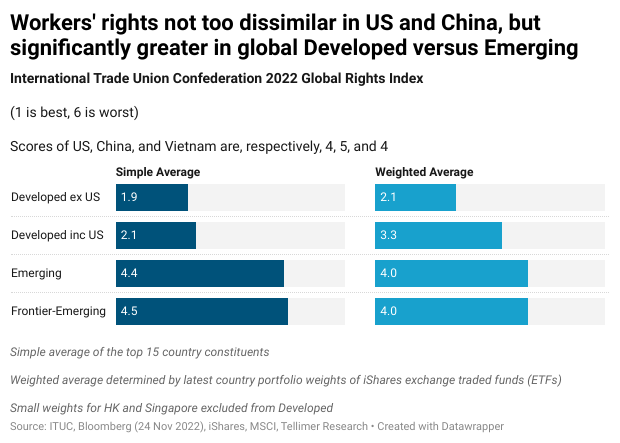 According to the ITUC, the index is compiled by collating the responses to questionnaires completed by national unions and its own analysis of national laws covering collective labour rights, across 163 countries.

The moral, political and economic debate around workers' rights, specifically the rights of providers of labour versus the rights of owners of capital, pre-dates the modern fashion, or marketing fad, for ESG investing, which has tended to focus more on factors related to the environment, gender, weapons and tobacco.

The competition between self-avowed socialist versus free-market political parties, of the type I watched in the UK in the Thatcher era, particularly when Labour under Michael Foot was trounced in the 1983 election, now seems to be confined largely to Latin America – eg the recent battles between Lula versus Bolsanaro in Brazil, Fernandez versus Macri in Argentina, or Boric versus Kast in Chile.

However, the political constituency of the worker made economically obsolete after an era of globalised capitalism, is obviously very much alive and relevant. This support base was key to the rise of right-wing populist politicians like Trump in the US, Bolsonaro in Brazil, Orban and others in Eastern Europe.

In China, the lack of sufficient trickle-down benefits from an era of unprecedented overall macroeconomic growth and the increase in inequality, which is still less acute than many other countries in developed or emerging markets, has been sufficient for General Secretary Xi Jinping's 'common prosperity' policy tilt.

I have argued many times before, like someone shouting into the wind, that, for institutional funds that claim to adhere to ESG principles and live up to the way they are marketed, they should screen for countries with even more rigour than they do companies.

Concentrating solely on corporate ESG risks missing the wood for the trees.

I have also argued, with similar futility, that institutional funds should acknowledge the moral philosophical challenge, or at least make transparent their bias, of how difficult it is to determine the objective metrics for assessing a country's behaviour.

Waiting until sanctions take a country off radar, eg Russia earlier this year, rather allows the horse to bolt before closing the stable door or, worse, ducks the entire country ESG challenge and, cynically, ex-post, virtue signals by selling positions (or marking down to zero market value) once the most powerful sanctioning entity, usually the US government, has deemed that country uninvestable.

Dare I say that, for emerging markets in particular, part of the conflict of interest in adopting an ESG approach to countries is that this would render the addressable universe so small – eg no China, Russia or Saudi Arabia, and perhaps no India too.

Country ESG-compliant EM funds could not support a commercially compelling product, in terms of asset gathering, for the largest institutional managers.

This is quite apart from the subjectivity and deficiencies in measurement inherent in the available third-party indices that measure personal freedom or democracy.

There is an example of an exchange-traded fund (ETF) that, at the start of 2018, bravely pioneered investment criteria around the question of how to treat good or bad behaviour by countries. It is the Freedom 100 EM Index (Bloomberg ticker FRDM US), created by Life + Liberty Indexes (founded by Perth Tolle).

The resulting markets and stocks that screen well from this approach may simply be too small and illiquidly traded to support a large inflow of assets under management.

This brings us back to the critical point that, if a fund is not screening for country ESG, then this surely limits the utility of the corporate ESG screen. And, if country screening is so commercially prohibitive and loaded with subjectivity, then perhaps the entire ESG investing project should be cast aside.

Riot at the Foxconn factory

Reports and video footage emerged on 22 November, of protests, in some cases violent, at Foxconn's Zhengzhou factory, which employs 300,000 workers and where 80% of Apple's advanced phones are manufactured, provide the latest example.

Protests between workers and local police, company guards and management are over alleged grievances ranging from fears of rising Covid infections in a 'closed loop' operating environment – ie workers stay onsite without outside contact to minimise Covid infection, but this can actually exacerbate infection within the bubble – as well as low pay and access to medication.

Foxconn, owned by Hon Hai Technology of Taiwan (Bloomberg code: 2317 TT) issued a press release on 23 November, acknowledging the dispute but refuting the allegations that there were any shortfalls in contractual allowances or that new hires are co-located with Covid infected workers.

I published thoughts on the context of China's (slightly) more pragmatic zero-Covid policy and the deep links between Chinese intermediary inputs and manufacturing supply chains of the countries expected to benefit from 'China +1' investment – accessible via this link.

My back catalogue of ESG-related reports are accessible via the Tellimer Insights portal.

I also track over 50 ESG metrics across c54 emerging countries and the US and these are incorporated into the EM Country Investability Matrix, a database of over 200 top-down metrics.