Investors are starting to question the sustainability of the current strength in the USD. It has appreciated considerably in a fairly short space of time but has recently shown reluctance to rally much further. The weekly chart shows the USD to be overbought, and fundamentally, there are good reasons to argue for a USD correction. One of the main reasons will be the studies conducted on the Omicron variant that might very well prove far less virulent than previous variants and require minimal hospitalisation. Such news would help bolster risk appetite and assist risk markets in staging a material recovery in the final weeks of the year. A bout of profit-taking on the USD is long overdue given how much has been priced in.

In the commodity space, as the risk premium provided by the Omicron virus fades, gold investors have chosen to focus on an uptick in geopolitical tensions ahead of the release of the key US inflation data later this week which will undoubtedly cause the debate surrounding the Fed taper to re-emerge. On the geopolitical front, Bloomberg reported - the US and European allies are weighing sanctions targeting Russia’s biggest banks and the country’s ability to convert rubles for dollars and other foreign currencies should President Vladimir Putin invade Ukraine, according to people familiar with the matter.

Zambia: There are significant reforms on the cards for Zambia as part of the IMF deal which as always includes the removal of subsidies and programmes which are fiscally unsustainable. To this end, the finance minister Situmbeko Musokotwane has urged Zambians not to fear the tough reforms that are part of the preliminary bail out deal he has secured with the IMF, but to see it more as part of a process to create a more sustainable fiscal environment. Fuel and electricity subsidies will certainly be cut even with inflation running close to 20%, and other non-essential expenses will come into the firing line in due course. Bloomberg reported the following - “Cool down, don’t be scared,” Musokotwane said at a news briefing Monday in Lusaka, the capital. “You’ll be happy in the next two, three years. You’ll come pat us on our backs and say ‘Oh, we were just scared for nothing.” What is important to note is that Musokotwane is a seasoned veteran at dealing with the IMF. He was responsible for the implementation of the last IMF economic programme more than a decade ago during his previous stint as Finance Minister. During that time the Zambian economy grew swiftly with 2010 recording a GDP reading of 10.3% helped by his guidance and soaring copper prices.

Nigeria: Given the impact on currency dynamics, investors continue to pay close attention to Nigeria’s terms of trade. The latest trade data published on Monday revealed that Nigeria’s trade deficit increased by more than 60% on a quarter-on-quarter basis as it rose from NGN 1.87trn in Q2 to NGN 3.02trn in Q3. Nigeria imported NGN 8.15trn worth of goods and services in Q3, while exports amounted to NGN 5.15trn. Crude oil was once again Nigeria’s largest export, accounting for NGN 4.03trn or 78.5% of the total export value. Non-crude oil exports stood at NGN 1.1trn, as non-oil products contributed only NGN 546.27bn. On the import front, inbound shipments of goods and services from China accounted for almost 30% of Nigeria’s total imports in Q3. From a currency perspective, the deterioration in Nigeria’s terms of trade will undoubtedly weigh on the Nigerian Naira in the months ahead, especially if the country’s trade dynamics deteriorate further in the quarters ahead.

Gambia: Gambian President Adama Barrow secured a second term after securing 53.2% of the votes in the presidential election. His closest rival, Ousainou Darboe, obtained 27.7% of the vote. A coalition of local election observers declared the election free and fair despite a rejection of the results by former Vice President Darboe and two other candidates. President Barrow is set to run the country for another five years.

EU travel bans: Some positive news for the tourism industry in Southern Africa, Bloomberg reported that European Union Health Ministers are expected to discuss today whether it’s advisable to adjust the travel bans it has imposed on Southern Africa in response to the omicron variant. One option under consideration is to require a PCR test for vaccinated third-country nationals from that region, which could allow a decision in a week or so to ease or lift some travel bans. That said, The travel restrictions aren’t on the formal agenda for the meeting. Moreover, an EU official said that Health Ministers have no formal role in setting travel restrictions.

Botswana: The Botswana Public Officers Pension Fund has provided Tlou Energy with a BWP 50m convertible loan note and agreed to terms of an equity investment in the company, another sign of a fast-developing financial market sector. The loan will be used by Tlou Energy to fund the construction transmission line infrastructure to connect the Lesedi project to the Botswana Power Corporation power grid.

Ethiopia: The ongoing fighting and instability in Ethiopia continue to detract from investor sentiment towards Ethiopian assets. That said, it is worth noting that the government-backed troops have recaptured two strategic towns that provide access to a main trade route for the country. According to an official statement, government troops have regained control of Dessie and Kombolcha in the northern Amhara region. Last week the government also said it had retaken a swathe of territory in the north of the country in a major counter-offensive. The prime minister’s office on Twitter on Monday credited the recapture of the towns and four others to troops led by PM Abiy.

South Africa: Yesterday was a rangebound day, with the USD-ZAR offering very little in the way of directional bias. As SA still waits for scientists to confirm whether Omicron is something restricting the economy, investors are not yet trading fully on the anecdotal evidence suggesting that although highly transmissible, Omicron is a milder form of Covid. If the scientists concur, this will be something to cheer and, on aggregate, would build the case for travel bans to be lifted against SA and remove any reason to disrupt holiday tourism.

Forex: Worsening terms of trade weighing on the Kenyan Shilling

The bearish bias in the Kenyan Shilling remains intact as the currency continues to sell-off. One of the main factors weighing on the KES is the deterioration in the country’s balance of trade as imports continue to outstrip exports. For context, Kenya’s current account deficit widened to 5.4% of GDP in the 12 months through October from 4.8% of GDP a year earlier. 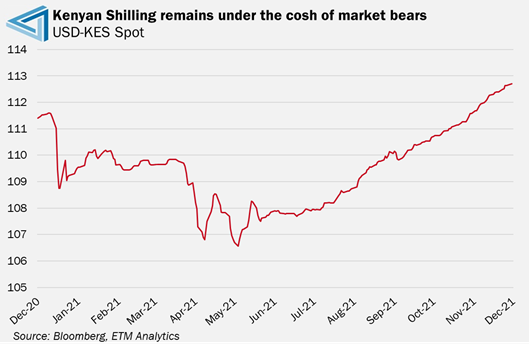 The central bank said that the wider current account deficit was due to a higher import bill, particularly oil and other intermediate goods imports, which more than offset increased receipts from agricultural and services exports, and remittances. According to Bloomberg data, the increased demand for hard currency has seen the Kenyan Shilling depreciate 4.42% against the USD since the start of H2 to reach its weakest level on a record of 112.71 on Monday.

In a move aimed at managing volatility in the KES and to ensure that there are no drastic moves in the currency, the central bank has continued to intervene in the FX market. Recall that Central Bank of Kenya Governor Patrick Njoroge said at the end of last month that the bank intervenes just to minimise FX volatility but does not set a direction of a level for the currency. Going forward, with a number of headwinds still present, we expect the bearish bias in the KES to persist. This is expected to keep inflation risks tilted to the upside.

Fixed Income: While global dollar liquidity is tightening, Angola still plans to go ahead with Eurobond issuance in 2022 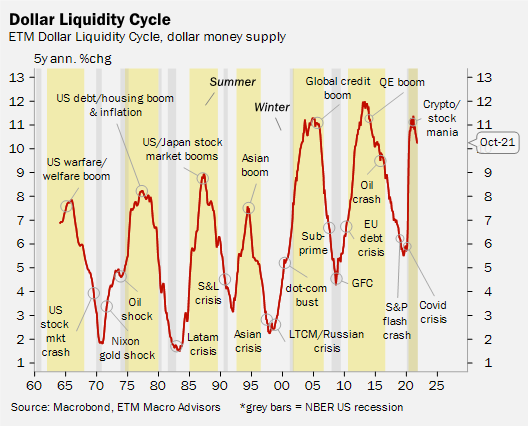 As dollars are swept from the global financial system, hot money is expected to be pulled from riskier emerging and frontier market assets first. That said, the global financial system remains flush with cash at the moment, and lending conditions in the international debt space remain favourable. Therefore, we still see a window of opportunity for African governments to tap the international bond market as they look for ways to bridge their respective budget deficits.

Angola is one of the countries that is still looking to tap the international debt market in 2022. Although Finance Minister Vera Daves de Sousa ruled out a Eurobond sale this year, saying that 2021 is already over, the Finance Minister said that Angola would probably issue Eurobonds next year.

Recall that investor sentiment towards Angola has improved significantly over the past year, with Angola being one of the only African countries to deliver on its reform and privatisation pledges during the COVID-19 era. While fiscal risks in Angola remain elevated, the government has shown that it is committed to reining in its debt and pursuing its reform agenda. Therefore, we expect that there will be sufficient demand for the government to move ahead with its Eurobond sale in 2022.

Macroeconomic: Recovery in Ghana’s private sector persists in November, albeit at a modest pace

The final African PMI report for November was released on Monday. The IHS Markit PMI report revealed that Ghana’s private sector continued to recover in November with the headline PMI gauge unchanged from the previous month at 51.0, signalling a third successive improvement in business conditions. Given the recent escalation in growth concerns in Ghana, the November PMI report is somewhat encouraging. 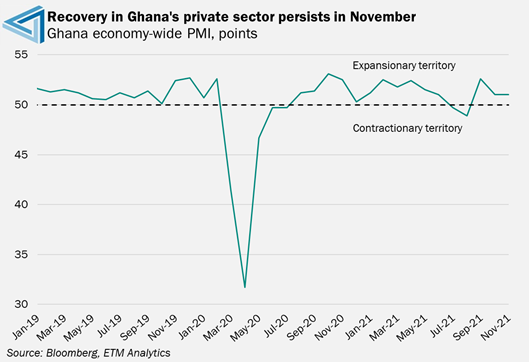 Markit said in the report that new order growth ticked higher in November and remained solid. Sector data indicated that trends in new business were positive across the five broad areas covered by the survey. With output requirements increasing, firms once again raised their staffing levels, extending the current string of job creation to three months.

As is the case for most African countries, price pressures continued to accelerate sharply in November. Respondents linked the increase in input prices to higher fuel costs. Wages also increased but at a much softer pace than purchase prices. Companies were however able to pass on the rises in input costs to their customers, thereby leading to a sharp increase in output charges. The rate of inflation was the steepest since July.

Looking ahead, businesses surveyed by Markit were strongly confident in the 12-month outlook for business activity, with sentiment rising sharply from October to the highest in just over a year. As well as hoping for improvements in customer demand, new company strategies and expansion plans also supported optimism. Close to 84% of respondents predicted a rise in activity over the next 12 months.