Will the Central Bank of Kenya follow in the footsteps of its regional peers?

Global fixed income markets were offered some temporary reprieve yesterday with the announcement that the BoE would be delaying its QT program and would look to purchase bonds over the next few weeks to stabilize the market. This announcement led to a historic rally for longer-dated gilts, with the 10yr benchmark yield down almost 50bp on the session, while the 30yr saw an even greater move. This filtered through to the rest of the market, with US yields down between 15bp and 20bp on the session, while bunds saw similar moves. The rally for bonds gave risk appetite a boost, and helped to bring the USD off from its highs reached earlier in the session.

While Asian markets are enjoying this support in early trade today, the impact is starting to wear off as UST yields are rising once again. The market reactions to yesterday’s announcement were nothing more than tactical plays and with the Fed and others still remaining so hawkish, profits will likely be booked on the rallies and the bearish bias for bonds will entrench itself once again. It should also be noted that the recent volatility in the market may be being exaggerated by the close of the quarter, as portfolios are adjusted, which drains liquidity.

Botswana: While Botswana has resumed exports of live cattle and beef declared free from foot and mouth disease, sales to Europe remain suspended. According to a government official, "following an outbreak, there are specific processes to be implemented and arrangements that must be negotiated with the European Union before exports are resumed, and this process is going on." Europe has tighter restrictions, and the continued suspension will see Botswana miss out on a valuable source of foreign exchange income. Along with Namibia, Botswana is one of the biggest beef exporters to Europe, where it enjoys duty-and-quota free access.

Botswana: A 1.4 million tonne per year coal mine at state-owned Morupule Coal Mine (MCM) was commissioned by President Mokgweetsi Masisi on Wednesday. The mine should result in increased coal exports as demand surges on the back of the war in Ukraine. The new open cast mine, which will increase MCM's output by 50% to 4.2mn tonnes per year, is part of a strategy to supply various markets with a cumulative 7.6 million tonnes of coal a year by 2027, in turn, growing revenue to BWP 3bn ($222.6mn) from BWP 1bn forecast next year. Botswana is aiming to become a key coal producer, having already increased sea-borne exports in 2022 through Maputo and Walvis Bay. The moves come at an opportune time when many European countries are seeking alternative sources of fuel given the global energy crisis.

Ghana: Speaking yesterday, Finance Minister Ken Ofori-Atta said that Ghana would start to engage with local and foreign investors to help speed negotiations for a program with the International Monetary Fund. The minister added that Ghana wants "key aspects of that program to be reflected" in next year's budget. Next year's budget is scheduled to be presented in November, leaving the government with less than two months to finalize an agreement with the Washington-based lender. The minister also noted that Ghana has not reached an agreement with the IMF on the parameters of any debt operations and that the ministry is in the process of completing a debt sustainability analysis.

Kenya: The Central Bank of Kenya will deliver its latest verdict on the benchmark policy rate today. Inflation in Kenya remains above the CBK's 7.5% ceiling, and risks remain tilted to the upside. Some risk factors include persistent Kenyan shilling weakness, the worst drought in decades, the removal of a gasoline subsidy, and strong price pressures due to lingering supply shocks. Against this backdrop, we expect the CBK to hike rates today.

Mauritius: The Bank of Mauritius is the latest African central bank to hike rates to combat soaring inflation. The central bank raised borrowing costs for the third straight meeting to 3.0% from 2.25%. According to Governor Harvesh Seegolam, "the Monetary Policy Committee decided to pursue the withdrawal of accommodative monetary policy to avoid a de-anchoring of inflationary expectations." The latest rake hike brings the cumulative rate increases to 115bp this year, unwinding most of the 150bp of easing announced in 2020 to prop up the economy hurt by the coronavirus pandemic. Inflation which is at a 14-year high is forecast to average 10.6% this year, compared with 8.6% at the previous meeting. The central bank estimates the economy to expand by 7.4% this year due to an influx of visitors, reviving a key source of foreign exchange. The growth forecast compares to 3.6% recorded in 2021.

Namibia: Economic growth in Namibia slowed to 5.6% y/y in Q2 from an upwardly revised reading of  6.5% y/y in Q1. The solid performance of the economy is attributed to growth in the agriculture and forestry, mining and quarrying, electricity and water, transport and storage, and health sectors. Meanwhile, the construction and public defence sectors recorded declines in value added. While a recovery in mining, electricity, water and tourism sectors is expected to underpin growth this year, it is worth noting that downside risks exist. Some of these risks include the negative impact of the war in Ukraine, supply chain disruptions and mounting global recession risks.

Uganda: Minister of State for Finance Henry Musasizi yesterday said that the government expects to generate revenue of around $69.7bn over the life of the country's oil projects. The projects are estimated to earn Uganda at least $2.8bn annually once production starts in 2025. The anticipated earnings equate to 40% of projected domestic revenues in the year through June, and the oil revenue will be mainly invested in infrastructure development, bridging an annual deficit of $400bn. The revenue will also bolster foreign exchange inflows while the projects will create employment and support economic activity.

Forex: Selling pressure on the Egyptian pound shows no signs of abating

The Egyptian pound remains in the spotlight as selling pressure on the currency showed no signs of abating yesterday. Specifically, the USD/EGP rose to a fresh high of 19.5274. The pound is among the worst performing African currencies tracked by Bloomberg against the USD, having lost almost 20% since the start of the year.

Fundamentally, the pound is overvalued by more than 8% on a real effective exchange rate basis, and this has in part allowed for the build-up of external imbalances and left Egypt vulnerable to external shocks, as witnessed by the negative impacts of the war in Ukraine. Some of these negative impacts include a shortage of foreign currency. Foreign currency shortages have materialized amid higher costs of imported commodities, a drop in Russian and Ukrainian tourists, and a flight of dollars from the fixed income market. 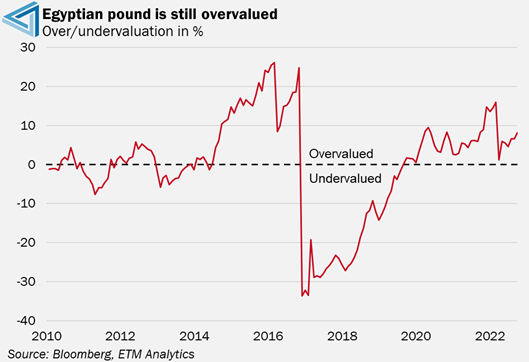 With fundamentals continuing to deteriorate, the International Monetary Fund (IMF) having called for currency flexibility, and the central bank policymakers providing signals that they are in favour of looser management of the currency, risks for devaluation in the near term continue to heighten. Looking ahead, the pace of devaluation will be key. A gradual one could extend the foreign currency shortage, stifle growth and sentiment and possibly fall short of the demands of the IMF. Meanwhile, a quicker pace could trigger a surge in inflation.

Fixed Income: Blowout in Ghanaian CDSs implies that the market is pricing for a default

The sharp rise in global interest rates and risk-off conditions have resulted in a marked increase in fiscal pressures across Africa, with many countries being effectively priced out of the international debt market. Moreover, the surging dollar, which has resulted in a broad-based sell-off in African currencies, has resulted in significantly higher external debt levels. As such, countries with high external debt levels and that have been dependent on funding themselves in the international debt market have found themselves in a precarious fiscal position. 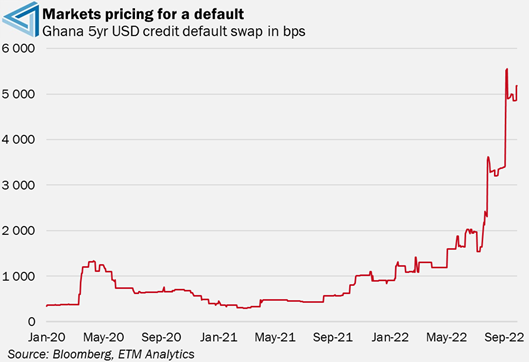 Ghana is one such country. Ghana’s debt distribution between local and external debt leaves the country vulnerable to external market shocks and local currency depreciation. Note that more than 50% of Ghana’s debt is external, with a significant portion held by those within international capital markets. The effective pricing out of the Eurobond market has come as a double-edged sword for Ghana. Not only has Ghana been rolling over its debt and funding its budget deficits by issuing Eurobonds in recent years, but the Eurobond issuances have helped prop up the country's reserves, which the central bank was able to use to keep currency weakness contained.

In the space of 12 months, Ghana's fiscal outlook has been turned upside down as major central banks turned hawkish amid soaring global inflation. The significant fiscal degradation, which transpired primarily due to the structure of the country’s debt profile and shift in international lending conditions, has pushed Ghana to the edge of a fiscal cliff. The extent of the fiscal degradation is reflected by the unprecedented rise in Ghanaian bond yields and the exponential increase in Ghana’s credit default swaps, which is effectively the cost of insuring against a sovereign default. While Ghana is expected to secure a deal with the International Monetary Fund, the country will likely be forced to default or restructure its debts. The focus going forward for fixed income investors will be centred on the talks with creditors and the IMF as the government maps out its plan to return to a sustainable fiscal position.

African countries are still feeling the burn of high food prices driven by global supply shortages and currency weakness. While global food prices have pulled back from their peaks, food price pressures in Africa remain acute. This is reflected in the accompanying chart, which highlights that food price inflation in Sub-Saharan Africa has quickened this year. 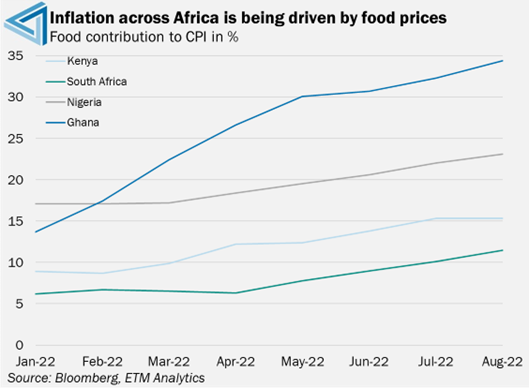 According to a study conducted by the International Monetary Fund, staple food prices in Sub-Saharan Africa have increased by around 24% over the past two years, the most since the 2008 GFC. The IMF said that global factors are partly to blame, adding that the region imports most of its staple foods (wheat, palm oil and rice). Supply disruptions, currency depreciation and fertilizer prices are some of the main factors that have resulted in higher food prices.

Regionally sourced staple food prices have also spiked in some countries amid adverse weather conditions and higher input prices. In Nigeria, the prices of both cassava and maize have more than doubled in recent months, even though they’re mainly produced locally. Cassava prices in Ghana meanwhile jumped 78% in 2020-21, reflecting higher production costs and transport constraints, among other factors.