Casper (CSPR US), an online mattress company, is aspiring to awake the US IPO market from its slumber. Casper, which is named after the "friendly ghost" cartoon character, is the first major IPO of 2020. There is no shortage of ambition, as the company vows to disrupt the US$432 billion "sleep economy".

Though its operations are mostly in the US, its business model has important implications for the EM e-commerce sector. The issue comes on the heels of several poor shows from loss-making disruptive companies such Uber, Lyft and the WeWork debacle. There are several lessons for the likes of Jumia (JMIA US), Sea Ltd (SE US), and Alibaba (BABA US).

One needs to conquer the last mile

The physical delivery of goods purchased online is the killer app for online retailers. Since it was founded in 2014, Casper has been delivering mattresses in boxes to customer doorsteps. Its revenue rose 43% to US$358m in FY18. Casper has disrupted the US mattress sales industry by providing an online interface for a bricks & mortar business. Mattress sales, like shoe sales, were stubbornly offline until recently.

JMIA US, BABA US and SEA US have all grappled with the logistics of delivery. The logistics costs in these businesses range from 5 to 15% of revenue.

The quality of the delivery is probably the single most determining factor in the e-commerce customer experience. Caspers has a return policy of 100 days. Return rates have risen from 15% in 2017 to 20% in 9m19. Transporting a 90-pound mattress to a customer and then collecting it back is a huge drain.

JMIA US has grappled with the last mile issue. JMIA US said that 14.4% of GMV in 2018 either failed to deliver or was returned. If, as short-seller Citroen alleges, 41% of orders were returned, not delivered, or cancelled in 2018, it would mean that almost a third of orders were cancelled.

Operating expenses can be heavy

Casper has spared no expense in projecting its brand. Much of the spending has been search advertising and social-media influencers. It has spent US$423 million on marketing since the start of 2016.

At a third of revenue, operating expenses as a proportion of revenue is similar to EM e-commerce. The only difference is that Casper's opex is weighted towards online spending, whereas EM players still prefer billboards and print.

Amazon became cashflow positive by negotiating with their suppliers, and became cashflow-positive in 2002 and profitable in 2003. It commanded discounts from its suppliers due to its scale. Eventually, it introduced products, such as Kindle, that accelerated its emergence into profitability.

In contrast, JMIA US's CFO worsened between FY17 and FY18. We expect an average CFO loss of US$240mn in FY19-21, which would deplete its cash.

JMIA is trading at 2.7x P/Sales (FY20), while the EM e-commerce average is 5.4x. If Casper is looking for just 3x P/Sales, we consider our SELL recommendation on JMIA US and target multiple of 2x to be appropriate. JMIA's cash generation is far inferior to its sleepy US counterpart.

Our Cash Sustainability Index (CSI) is a metric to assess the viability of e-commerce companies. The CSI rates the historical EBITDA margin, CFO margin and FCF margin. The higher the CSI, the more sustainable the business.

Alibaba tops our CSI. If anything, the Hong Kong listing should consolidate its position and insulate it from a downturn. Casper seems to be relatively strong on our CSI, based on our initial assessment.

The risk of the trade war causing a consumer slowdown in China still cannot be discounted. This could weaken Alibaba's expansionary plans. Hence, the moves to replenish Alibaba's ammunition is a judicious one, in our view.

At the opposite end of the scale, we are worried about e-commerce players that are burning cash. JMIA US and SE UA are potential victims of a slowdown. The cash may run dry when the music stops. 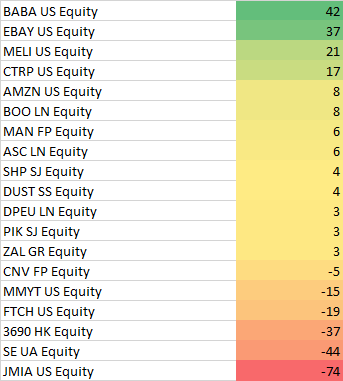 Casper's customers may sleep soundly in their mattresses, but the investors at the bottom of the CSI table may not.