Kenyan private sector credit growth has been accelerating in the past 12 months. Going forward, this should help stem margin decline for the Kenya banks in our coverage. The shift is not yet aggressive enough to support a significant lift in margins, but the trend is positive. 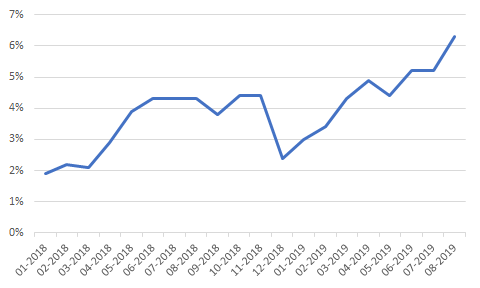 T-Bill rates have come down

The falling rates on government securities has been a clear help. For T-Bill rates, the market which most banks have been flocking to since September 2016, the rates are presently as follows :

This is compared to the following at a similar time in 2016: 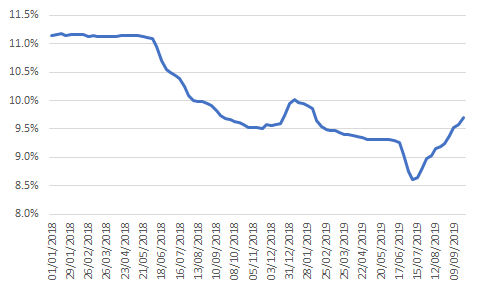 From an interest margin perspective, banks are now earning much less from government securities than they used to. This has been partially the reason for lower net interest margins for H2 18 and H1 19.

Private sector credit growth has therefore accelerated from Q4 16’s 4% levels to the present 6.3%. This may not be a dramatic transformation in the lending landscape, but it indicates a clear shift towards more lending.

Rate cap still a restriction, but there is a bit more wriggle room

The rate cap is still restricting bank lending given the ceiling is still low, with the result that not much credit is flowing to the SME segment. Most of the lending is still taken up by corporates, which were borrowing at below 13% even prior to the rate cap. For Kenya to witness strong economic growth, lending has to grow much more for the SME segment. This would require private sector credit growth to settle above the 10% level. For this to be achieved, we believe the lending rate ceiling has to be raised given the weakened asset quality in the country which have resulted in banks increasing borrowing barriers.

Presently however, banks have been willing to lend more on the back of increasing headroom for margins on loans. Previously, there were only about 200bps to 300 bps within which to accommodate lending risks and costs. This has now improved to between 500bps and 600bps, meaning more clients can be accommodated.

On the ground in Nairobi we have observed an increase in loan advertisements, specifically to salaried individuals. This is evidence of banks attempting to widen their loan client base on the back of wider margin room. But even so, a huge part of the SME market is still locked out of credit. With the high NPL levels in the country, banks have become even more stringent on lending to SMEs.

Kenya banks are still a Buy

Kenyan banks are still a Buy, in our view. The positive side of this news is future margin stability of net interest margins. As banks shift deployment of deposits to higher-yielding loans, margin decline should be stemmed for the foreseeable future. However, the shift is still not aggressive enough to see a significant lift in margins, which would be the ideal case. Banks are still holding onto high liquidity of c50%.

KCB is our top pick in the sector with a target price of KES54.00 (ETR of 42%). This is based on: 1) KCB Group’s large retail and corporate market share, boosted by the government’s shareholding in the bank; 2) the increasing contribution of non-interest revenue from alternative channels; 3) its sector-leading net interest margin; and 4) its continued high efficiency, delivering a lower cost/income ratio.