Why emerging market currencies are undervalued, according to the IMF

Calculating "fair value” for exchange rates is an inherently difficult exercise, fraught with theoretical and practical obstacles. However, the IMF’s External Balance Assessment (EBA) provides a clear framework for FX valuation, and once a year it releases a summary of "multilaterally consistent estimates for current account and real exchange rate norms" for 30 systemic global economies.

Its 2021 External Sector Report was released on 2 August, providing a timely reference point for currency valuations across 17 developed and 13 emerging economies. While the report has a wealth of interesting data, here we outline some of the most salient points with the goal of better understanding where major DM and EM currencies may be headed over the medium term.

The report finds that the USD is c5% overvalued and that all but 3 of the 13 emerging markets surveyed have undervalued currencies, which should bode well for EM currencies over the longer term, but may not necessarily translate into positive performance in the near term. While the valuations that result from the report should be taken with a grain of salt, they provide a useful starting point for investors’ own currency forecasts and a clear framework to think about external and exchange rate imbalances. 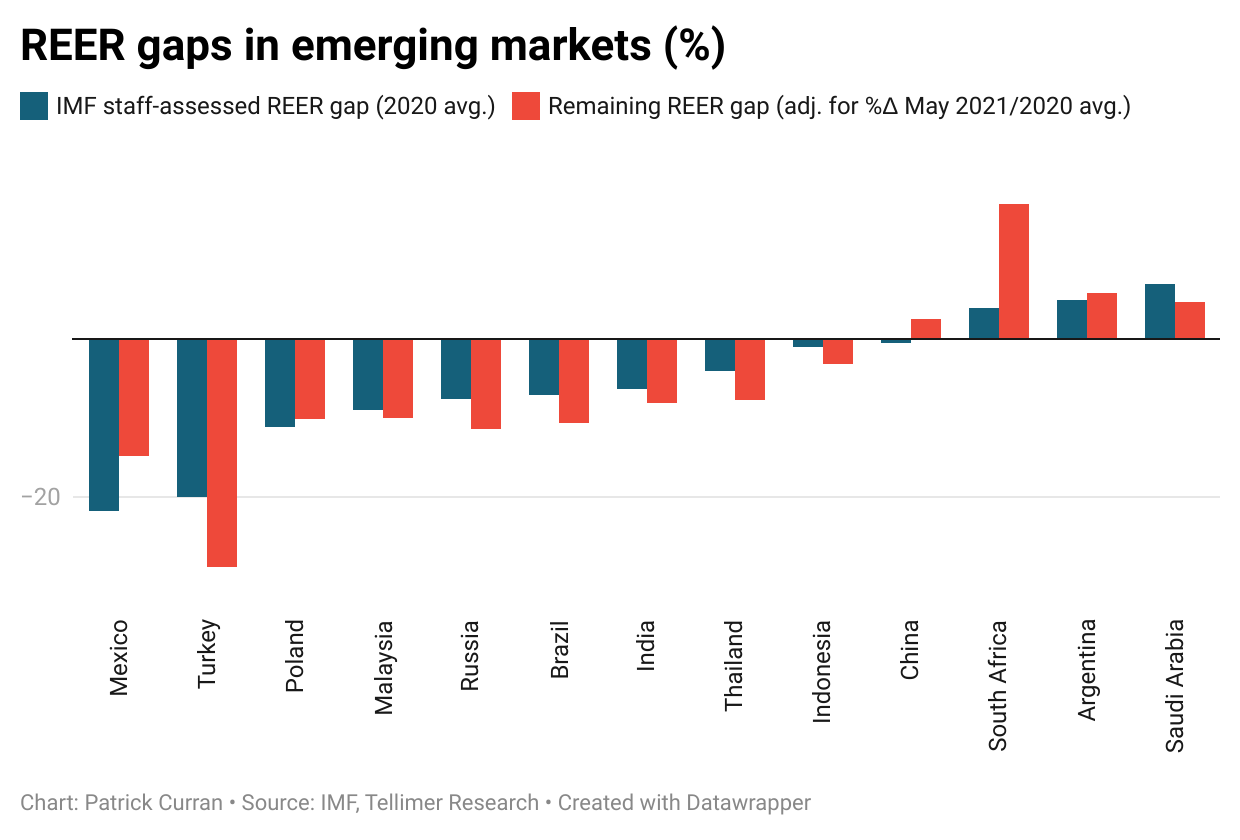 How to quantify exchange rate imbalances

The idea of current account norms stems from the concept that running a non-zero current account balance is often desirable for individual countries and is essential for absorbing country-specific shocks and efficiently allocating capital across borders, but with each country having an "equilibrium" balance that is consistent with fundamentals and desirable policies.

As the report says, "Some countries may need to save through current account surpluses (for example, because of an ageing population); others may need to borrow via current account deficits (for example, to import capital and foster growth). Similarly, countries facing temporary positive (negative) terms-of-trade changes may benefit from saving (borrowing) to smooth out those income shocks."

Other factors are also considered to balance the opportunity cost of holding reserves with the need to build external buffers, including the size and composition of financing flows, considerations of intergenerational equity for countries dependent on exhaustible natural resources, and the contribution of domestic and foreign policy distortions.

Based on this concept, the IMF staff calculates the "current account gap" as the difference between the current CA (adjusted for cyclical factors and policy distortions) and the CA norm. These gaps are then translated into REER overvaluation (undervaluation) by calculating the extent of REER depreciation (appreciation) required to move the balance to its benchmark, based on country-specific elasticity of the current account to REER changes.

The IMF also incorporates these factors into two multivariate REER regression models under its EBA framework (see here for methodology). Results can differ across the three techniques, with the most appropriate method varying by country (the framework is especially difficult to apply for commodity exporters). Ultimately, the staff chooses the most appropriate method, or a blend of methods, to arrive at a "fair value" range for each country's REER, leaving room for qualitative adjustments where necessary.

Global external imbalances were stable in 2020

Globally, current account balances (calculated as the sum of absolute balances) widened in 2020 from 2.8% to 3.2% of world GDP, and are set to widen further to 3.4% in 2021 before narrowing from 2022 onwards. The key driver has been unprecedented government borrowing to finance health and economic support measures to combat Covid, which has caused current account balances to fall (ie smaller surplus or larger deficit) in countries with relatively large fiscal expansions (largely DM) and to rise (ie larger surpluses or smaller deficits) in countries with relatively small fiscal expansions (largely EM). That said, the overall movements in current account balances were slightly blunted by increases in private savings, which offset some of the drop in public savings.

Overall, Covid-related factors explain the entirety of the increase in global current account balances in 2020, with the global balance unchanged at 2.8% of GDP once these temporary factors are stripped out. The IMF focuses on five key areas to strip out the impact of Covid and estimate the underlying cyclically-adjusted CA balance, including: 1) the collapse of tourism; 2) lower oil prices; 3) increased trade in medical products; and 4) shifts in household consumption from services toward durables and other consumer goods; and 5) other idiosyncratic adjustments involving shifts in the income balance (in South Africa), gold balance (in Turkey), remittances (globally), etc.

Once these cyclically factors are stripped out, global "excessive imbalances" – the sum of absolute current account gaps compared with their desirable medium-term levels – are also broadly unchanged in 2020 at 1.2% of world GDP, despite the 0.4% of GDP increase in global surpluses and deficits. About 72% of the excess balances pertained to developed markets (reflecting relatively larger fiscal expansions, on average), up from 69% in 2019. 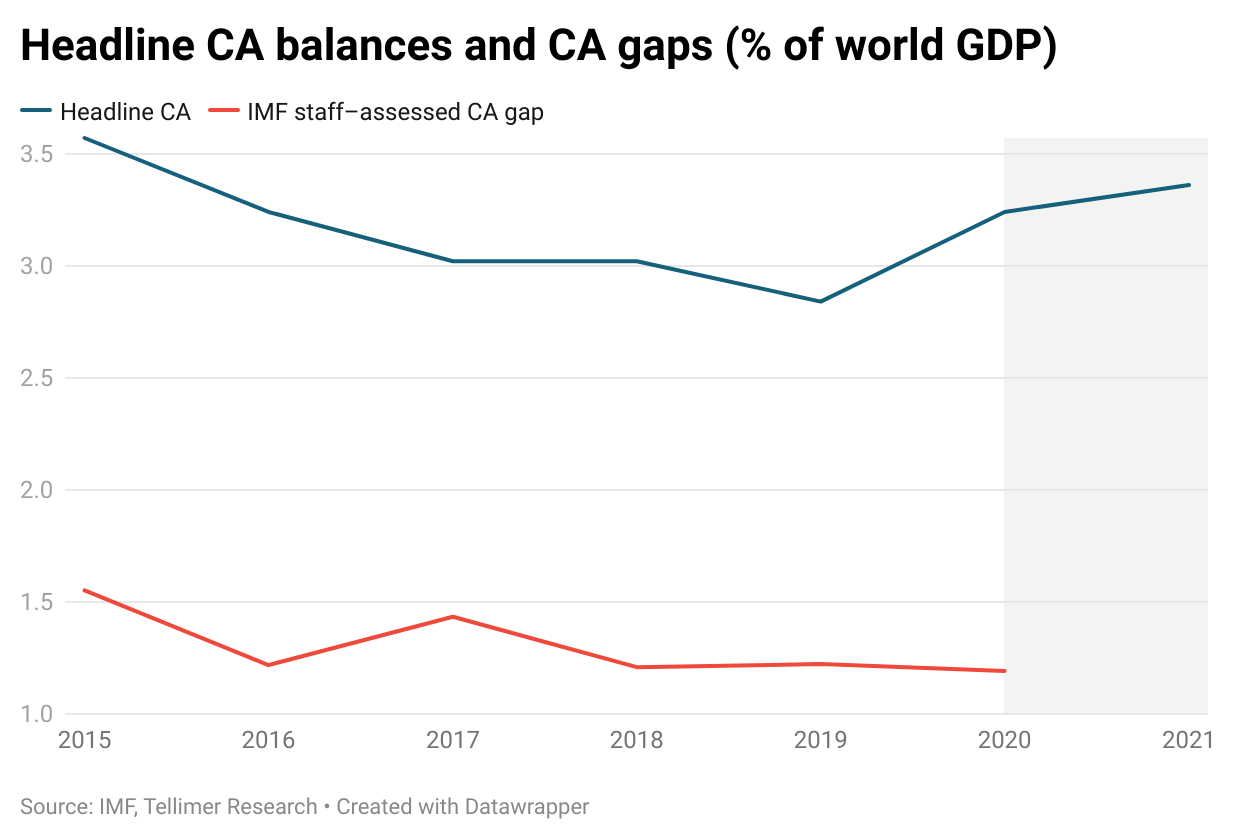 Interestingly, almost half of the countries assessed changed categories in 2020 compared with 2019. Countries with the largest negative current account gaps in 2020 (ie lower surplus or higher deficit than the norm) across the 30-country sample include Switzerland, the UK, France, Argentina, Belgium, and the US. Countries with the largest positive gaps (ie higher surplus or lower deficit than the norm) include Poland, Singapore, Malaysia, Sweden, Germany, and Mexico. 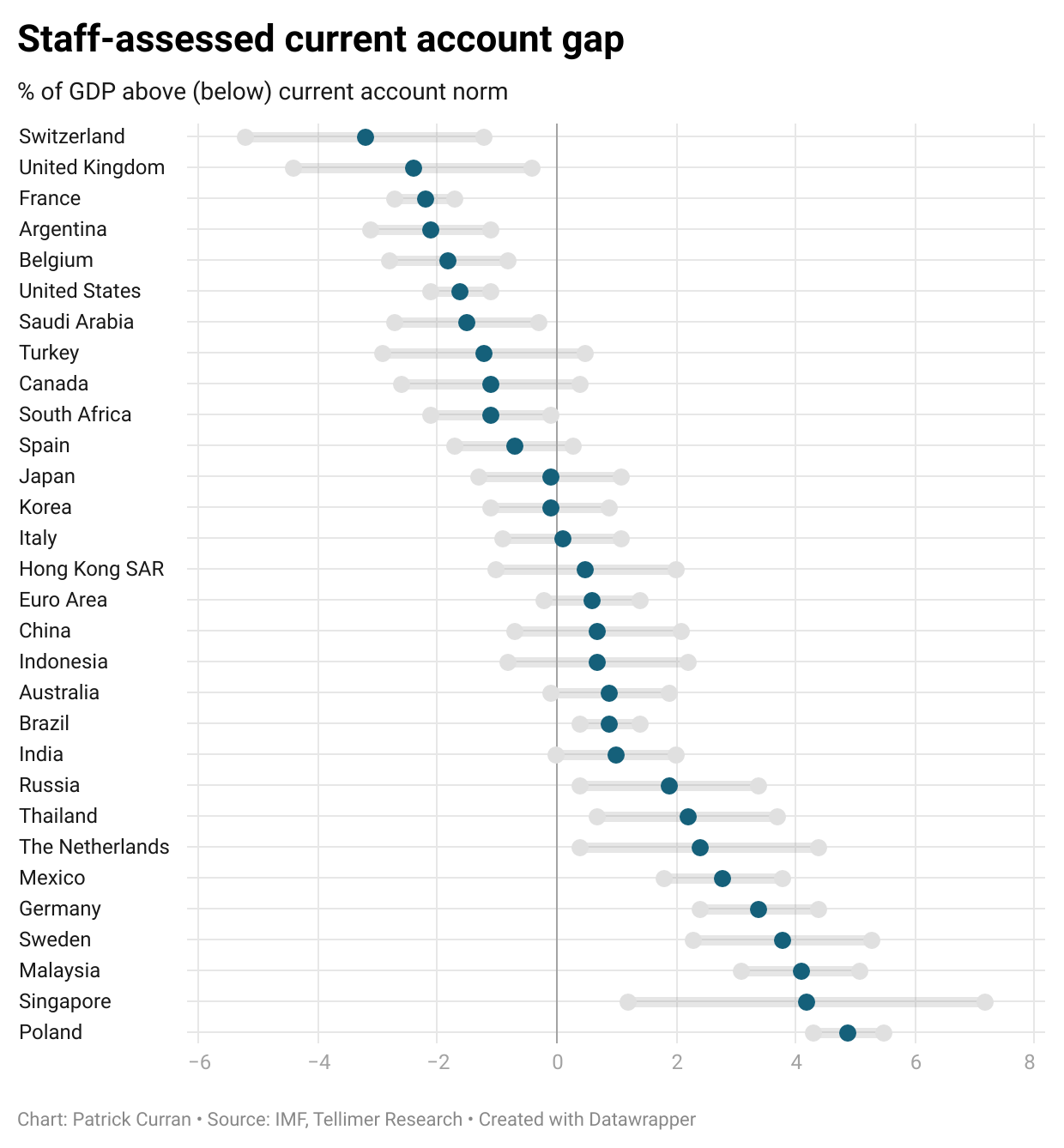 We summarise the IMF’s REER valuations below, which combine the IMF's assessments of CA gaps with its REER regressions and qualitative adjustments to arrive at a point estimate for each country's REER gap. Countries with the largest positive REER gaps (ie overvalued currency) include the US, France, the UK, Saudi Arabia, Switzerland, and Argentina. Countries with the largest negative REER gaps (ie undervalued currency) include Mexico, Turkey, Poland, Germany, Malaysia, and Singapore. 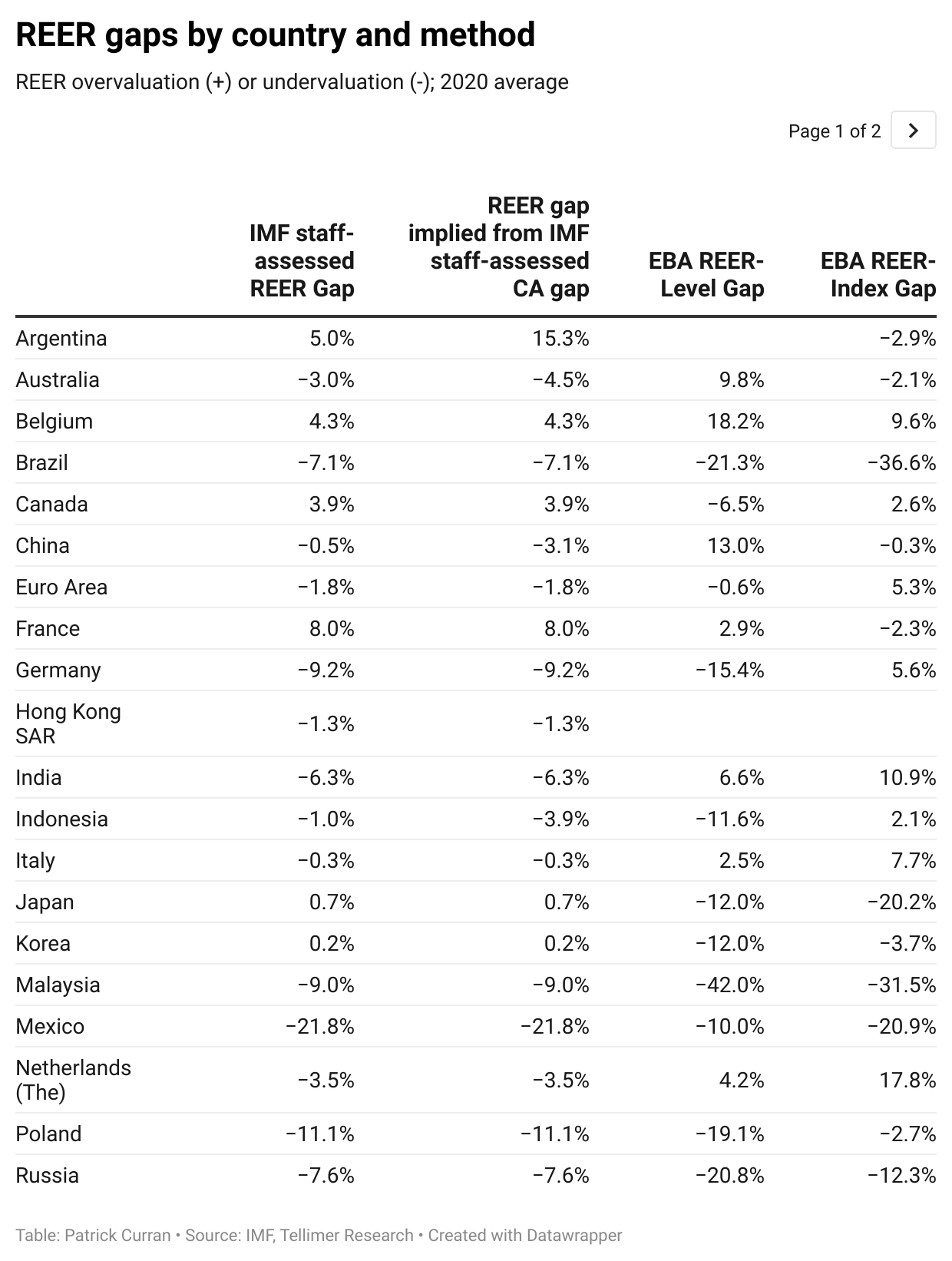 Within the 30-country sample, there are 17 developed markets and 13 emerging markets. On average (unweighted), we find that the EM currencies in the sample were 5.6% undervalued while the DM currencies were 0.4% overvalued on a REER basis. Within the EM universe, Mexico, Turkey, Poland, Malaysia, Russia, Brazil, and Thailand all stand out as having the most undervalued currencies, while Saudi Arabia, Argentina, and South Africa are the only countries flagged as having overvalued currencies.

However, these assessments are based on 2020 averages, and may have shifted since. Below, we adjust for REER movements over the first five months of the year, which flags Turkey, Mexico, Russia, Brazil, Poland, Malaysia, India, and Thailand as the most undervalued EM currencies (to an even greater degree in Turkey, given REER depreciation this year), while South Africa, Argentina, and Saudi Arabia are still overvalued (to an even greater degree in South Africa, given subsequent REER appreciation). 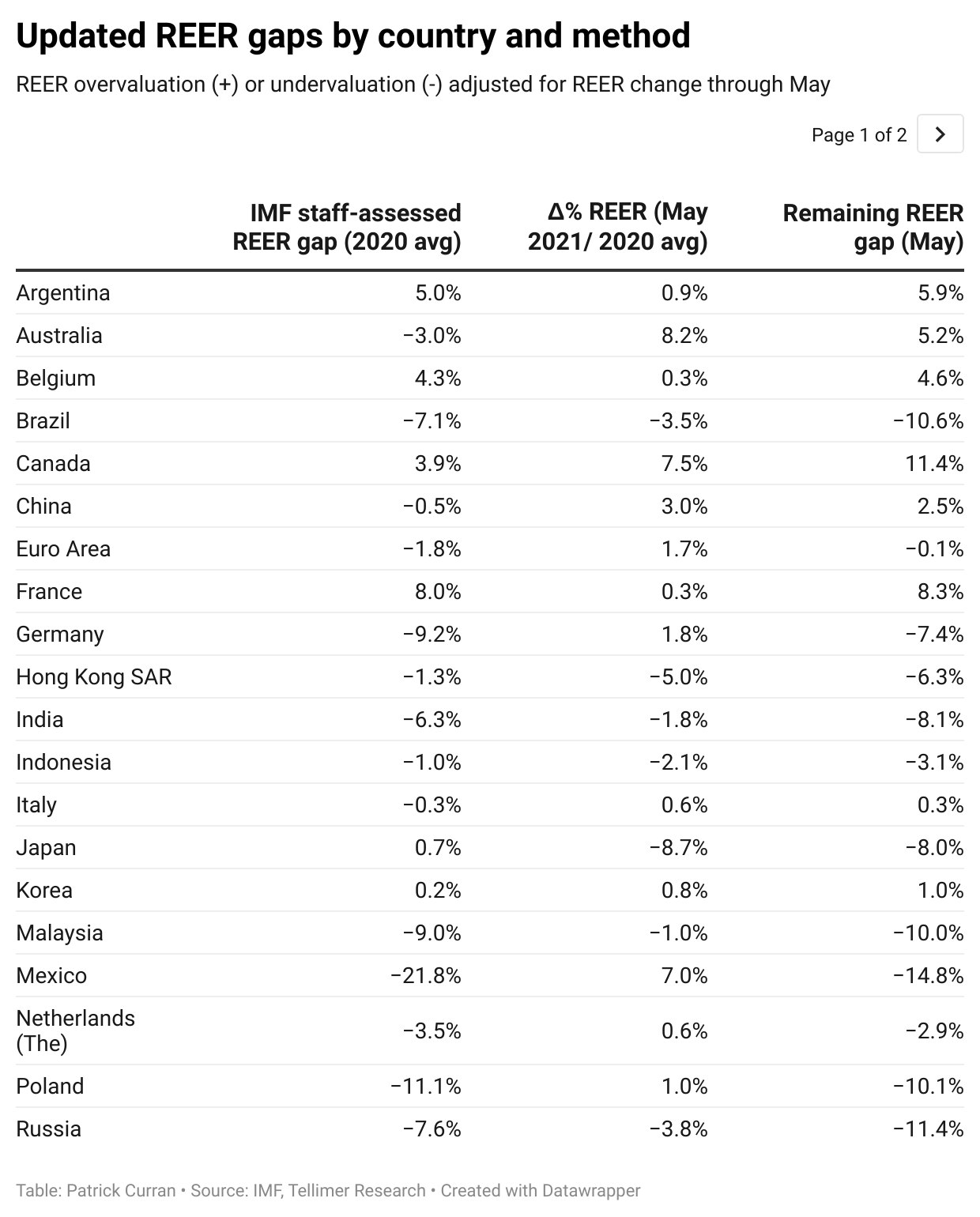 A framework for "fair value"

Calculating "fair value" for exchange rates is an inherently difficult exercise, fraught with theoretical and practical obstacles. Any resulting estimates should therefore be taken with a heap of salt. That said, the IMF's annual external sector report provides a clear, "multilaterally consistent" framework for FX valuation, and can thus provide some useful (if slightly backwards-looking) insights into the extent of external imbalances in key developed and emerging economies.

The fact that the USD appears to be c8% overvalued is positive for EM assets, but that overvaluation has likely decreased to c5% given with the REER sitting 3% below its 2020 average in June. USD depreciation could reduce credit risk and FX risk for investors in hard currency and local currency-denominated assets, respectively, though depreciation is by no means guaranteed (in last year’s report, the IMF said that the USD was c11% overvalued, but it ended 2020 just c3.5% lower relative to the 2019 average).

Exchange rates can deviate from fair value for an extended period of time, so investors should be careful not to connote fair value with an FX forecast. Despite the IMF flagging the TRY as being 15% undervalued in last year's report, the TRY depreciated by a further 10% in 2020 relative to the 2019 average. Brazil, Mexico, Saudi Arabia, Thailand, and Indonesia also deviated by 10% or more from their implied over/undervaluation in 2020, with an average deviation of nearly 10% across the 13-country EM sample.

In the short term, the USD and EMFX will likely be driven by the narrative on Fed tapering, which drove an EMFX sell-off in February/March and again in June. We have previously said that the risk of a "taper tantrum" leading to a sustained EMFX sell-off is overblown given relatively expansionary fiscal and monetary policy in DM and reduced external balances across EM. This view is affirmed by the IMF's external sector report, which shows that EM currencies are generally undervalued.

While the risk of a taper tantrum seems to have subsided for now (with 10yr UST yields falling from a peak of c1.75% at the end of March to 1.3% at the end of last week), FX risk varies widely across countries. We have compiled a scorecard to assess which countries could be most at risk. The IMF's external sector report also highlights some salient risk factors, which we highlight below for the 13 EM included in the report, which provides additional context for the IMF’s fair value assessments. 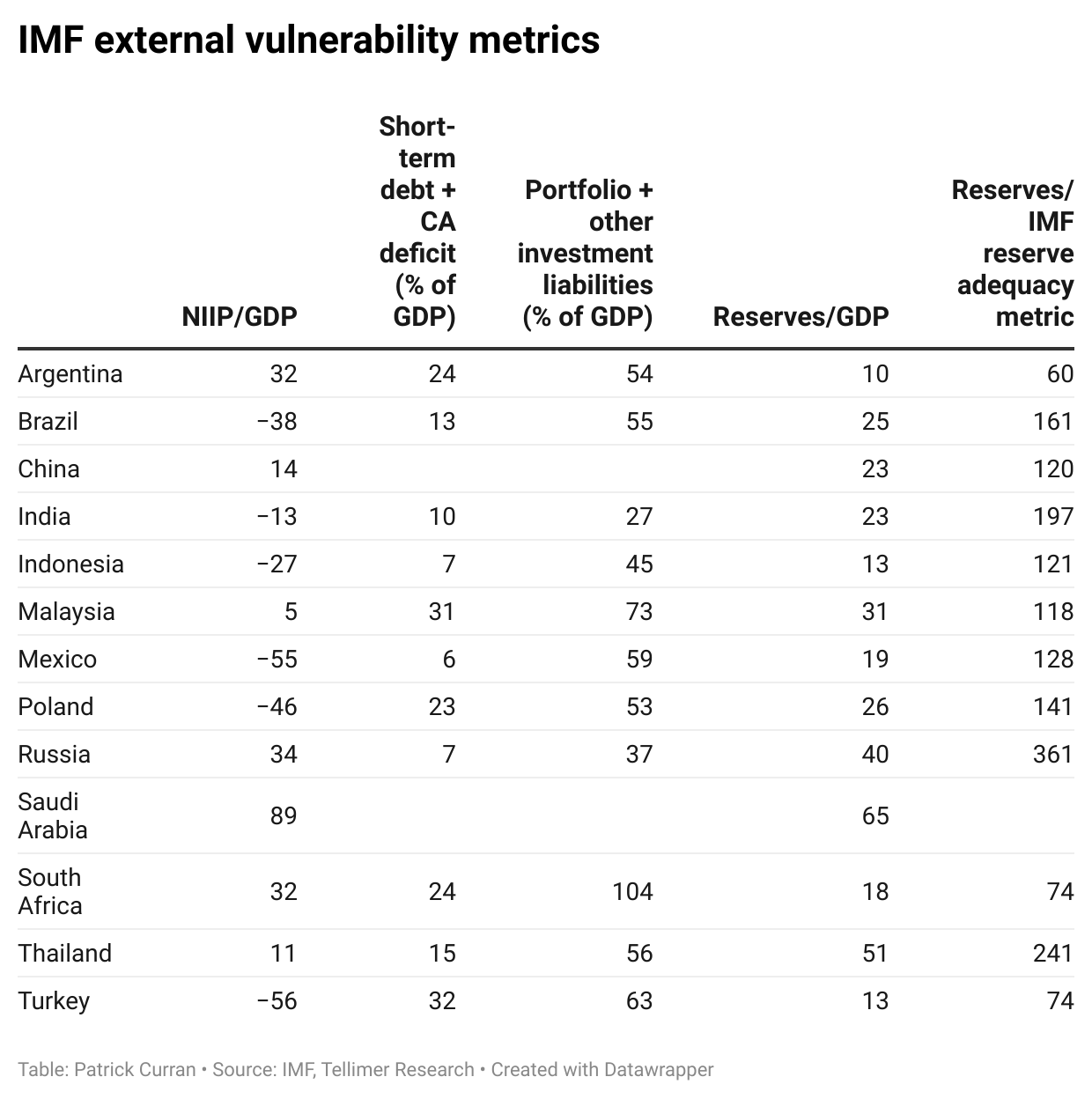 Despite our notes of caution, the fair value estimates for the subset of countries included in the external sector report can help inform investors' own currency forecasts and risk management frameworks.

While this report summarises, in our view, the most salient points for EM investors, we recommend reading the full external sector report (see here) and IMF white paper outlining the revised EBA framework (see here) for those interested in the mechanics of FX valuation and the IMF's external sector framework.