Our proprietary survey of app usage in emerging markets shows China standing out from the crowd. Chinese consumers make greater use of home-gown apps; the super app model has been notably successful in this market. The Chinese are also less active users of social media than elsewhere. We attribute these differences to the large size of the market, which enables domestic-only business models to be viable, and to the extensive censorship that exists in the country. With internet freedoms steadily eroding across the globe, our findings carry implications for investors in the main global platforms – such as Facebook, Google and Twitter – and for policymakers.

LinkedIn's recent decision to exit China has served to highlight the very different online experience Chinese consumers have relative to the rest of the world. Whereas global app operators such as Facebook and Google dominate app usage in other emerging markets, in China, local providers hold much more sway. 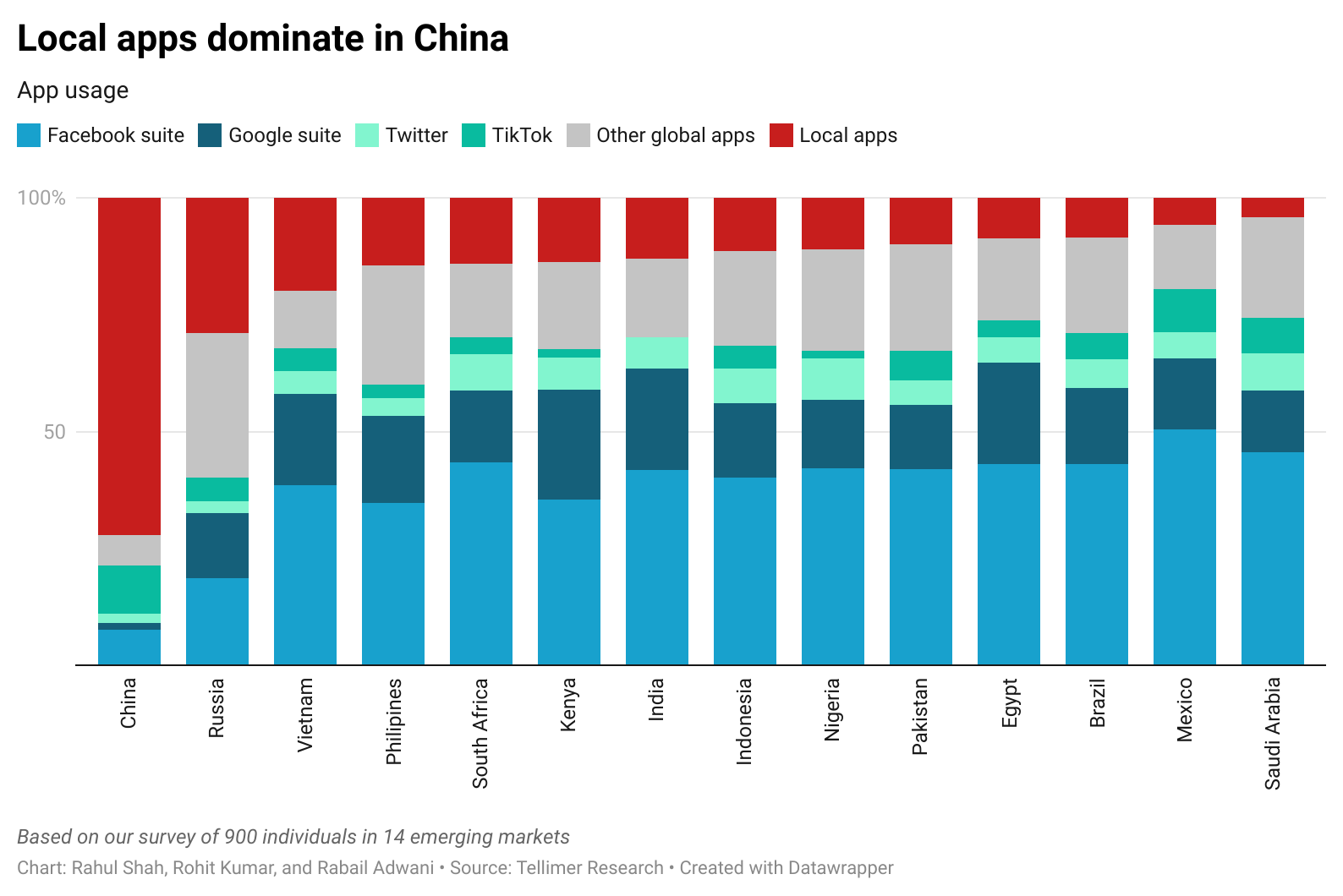 Indeed, just six local apps (WeChat, Alipay, TikTok, QQ, Taobao and Baidu) command almost half of Chinese consumers’ attention, based on our proprietary survey of app usage in the country. We have previously written on We Chat and Alipay’s super app status and the template this provides for operators in other Asian markets, such as Grab in Asean or Paytm in India. Facebook’s recent global outage has highlighted the risks users face when relying on single providers; we think this will also help encourage increased usage of home-grown apps.

Digging into the global apps that Chinese consumers do actually use, we find that Facebook tops the list. Although it is banned, it seems some individuals are still finding ways to access it. 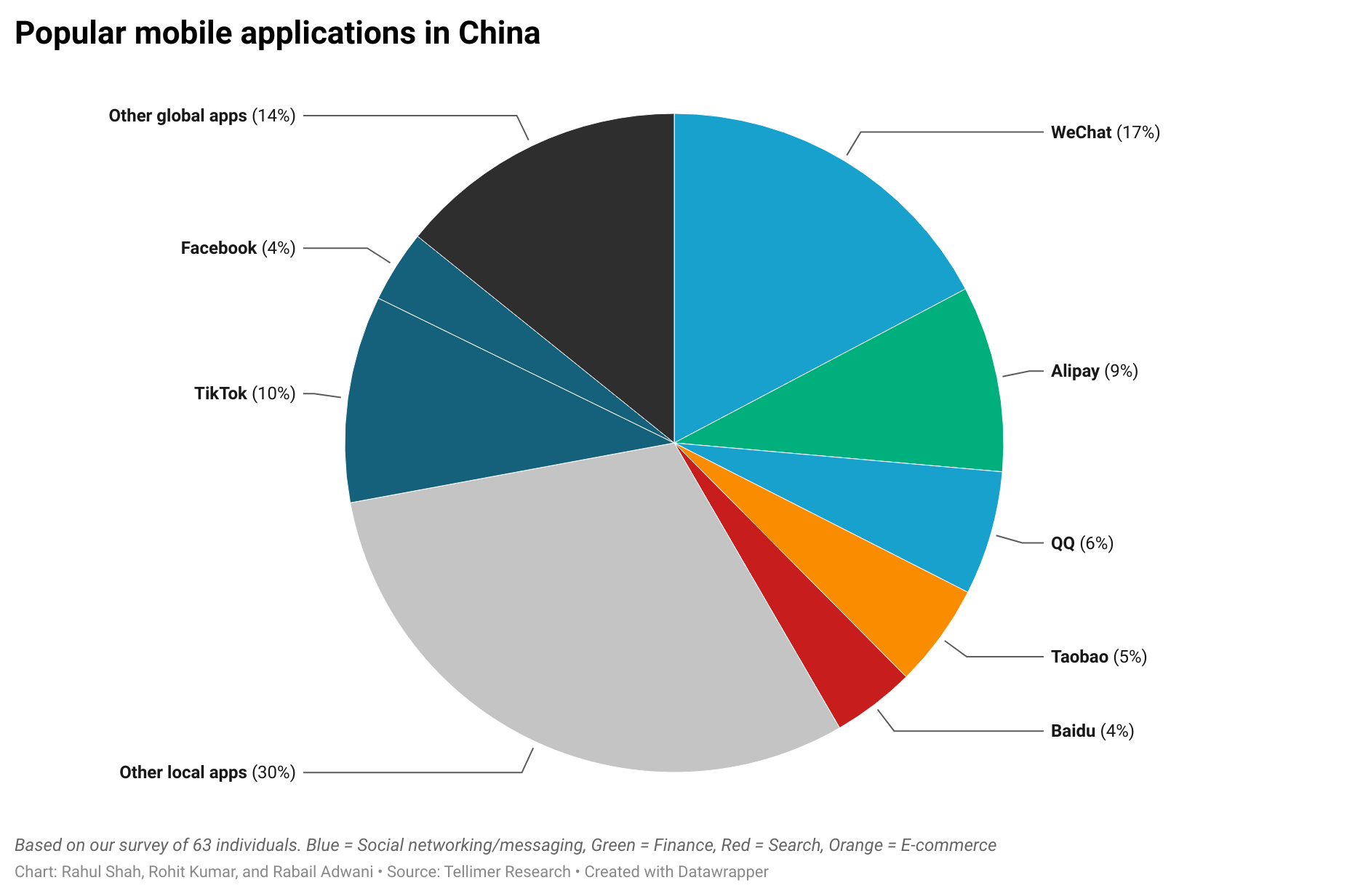 Censorship tarnishes the allure of social media for Chinese consumers

In relation to their online activities, Chinese consumers are effectively exposed to two layers of censorship. The first is their more limited choice of service providers; top global platforms like Twitter are prevented from operating in the country, leading to a very different pattern of consumption relative to other merging markets, as highlighted above.

The other layer relates to censorship of certain topics: big picture issues such as Taiwan/Tibet independence, democracy, Tiananmen Square protests, Xinjiang internment camps and so on, but also lower-level/ day-to-day issues like incidences of corruption or police brutality, even idle gossip. Our cross-country survey indicates that Chinese consumers are less active on social media than their emerging market peers. 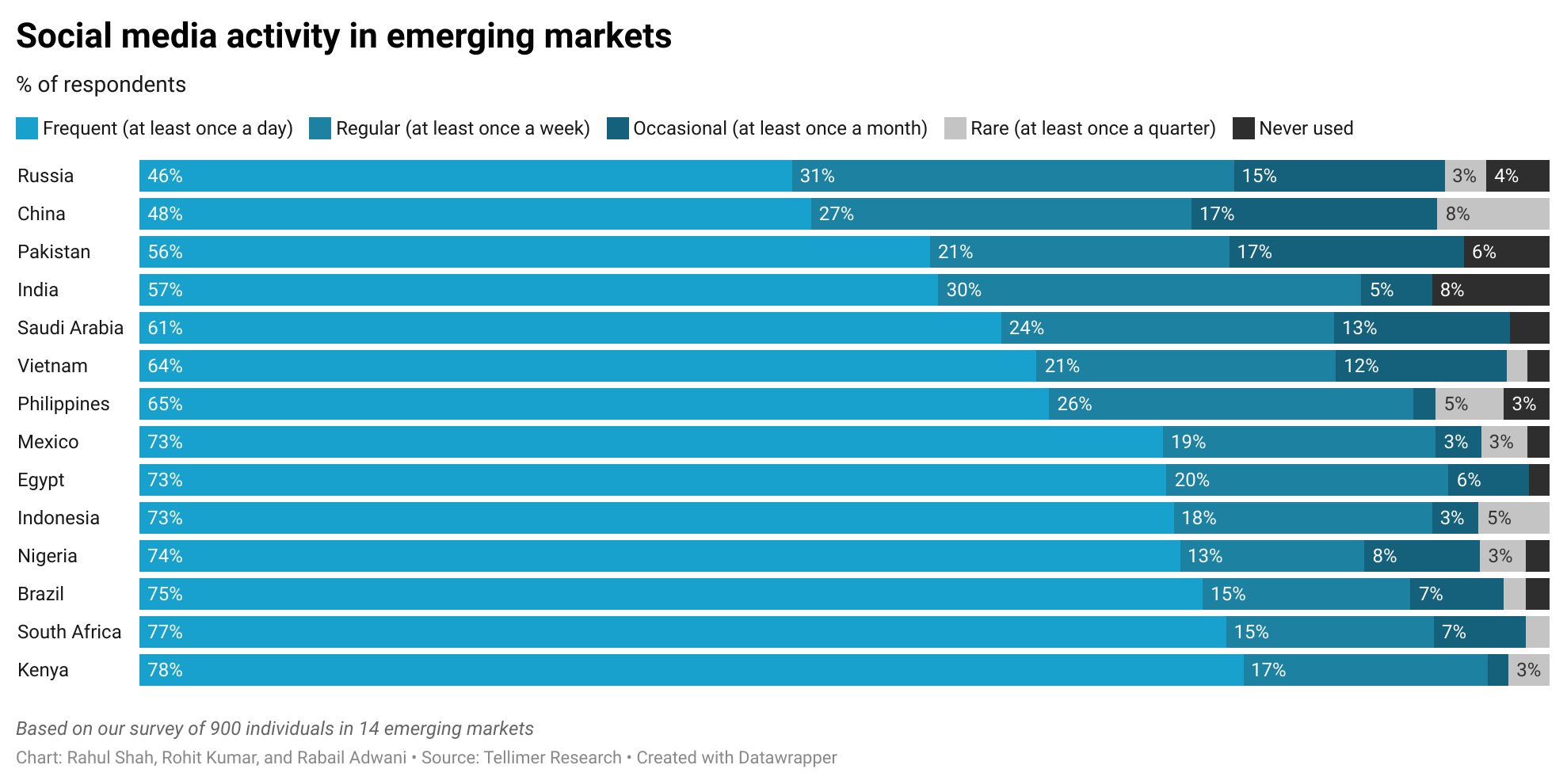 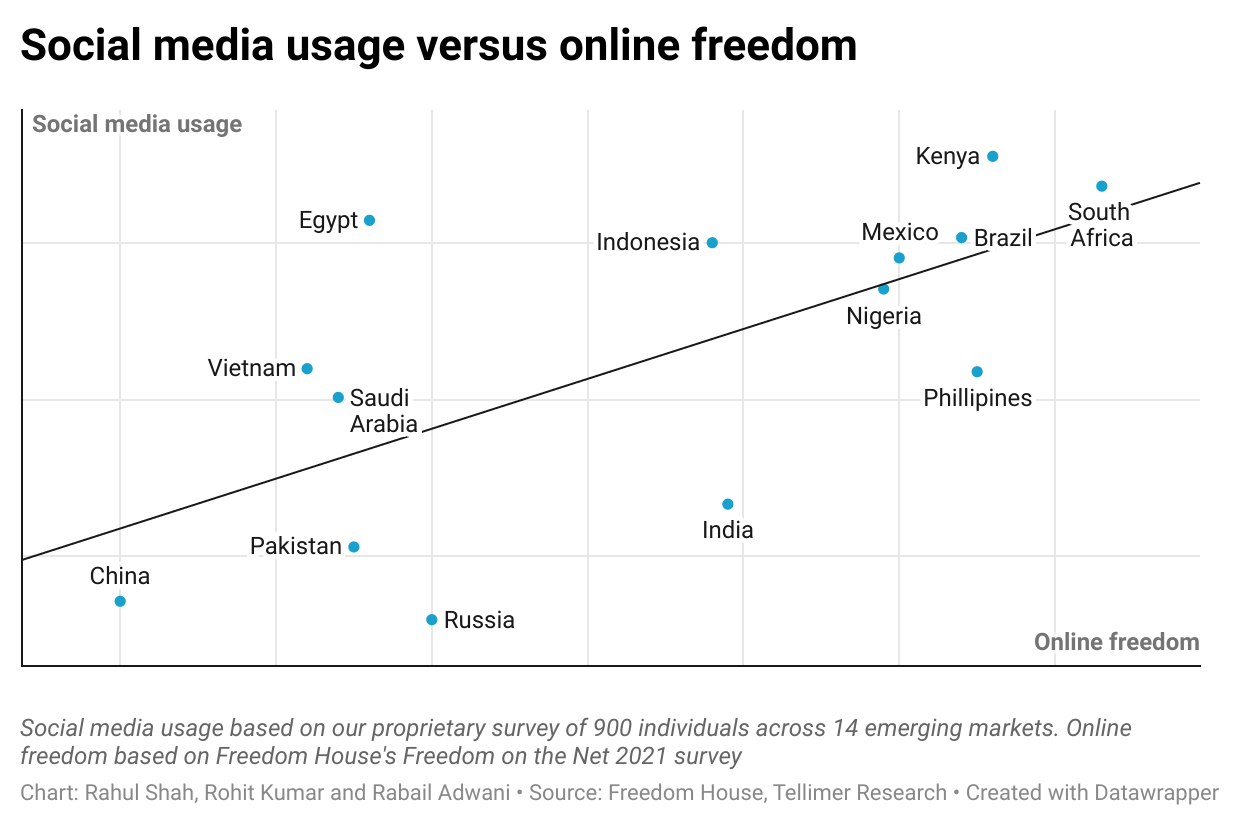 According to Freedom House, global internet freedom declined for the 11th year in succession in 2021, with China ranking as the worst country for internet freedom for the seventh consecutive year. In this context, our findings serve as a warning to the largest social media platforms, in relation to external pressure (eg from politicians or regulators) but also their own actions (eg blocking certain topics or viewpoints via self-censorship): if people cannot say what they want, they may not say anything at all. 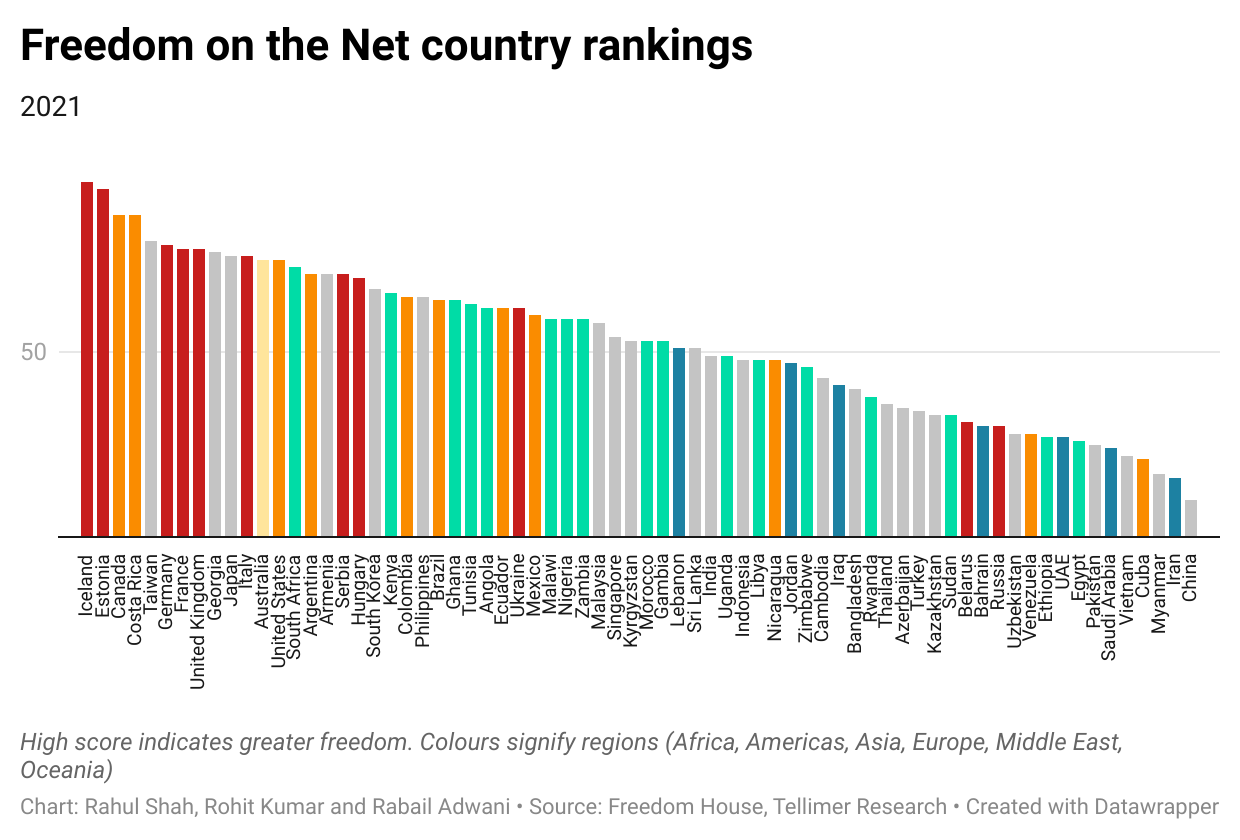 The markets and products most exposed to a China slowdown

How regulators in emerging Asia are supporting tech development

India’s super app race is about to heat up: Meet the contenders

Grab: Buy into the allure of Asia’s super app

The ultimate guide to China fintech