Why central banks could win the digital currency game in 2021

A year ago, I had the pleasure of attending a rather unusual event: the opening of the first proper supermarket in Shakawe, a medium-sized town on the banks of the beautiful Okavango River in Northern Botswana. While my local friends’ children were most excited about being able to buy delicacies like breakfast cereal without travelling 250km to Rundu across the border in Namibia, the biggest impact of the shop isn’t the bakery or the cheap maize meal, but rather the ATM. Unlike much of Africa, Botswana lacks a deep digital payments/transfers (‘mobile money’) ecosystem. Prior to the supermarket opening, local business owners needed to drive five hours (376km) each way to Maun, the nearest city of any size, to draw cash to pay wages and meet other business expenses. At least potholes are the only serious danger on the road.

I was in Shakawe during my time travelling across Africa while working on my new book on why the greatest impact of blockchain technology will be in emerging markets. The book sets out a wide range of areas where the problems that blockchain technology can solve, and thus the likelihood of it being good enough to be widely adopted as a new technology solution, are much greater in developing countries than in developed ones. The book was an outgrowth of our first ever Tellimer themes publication, Looking to 2018 and beyond, in which I first introduced the thesis. Looking at this issue then, the challenge was cryptocurrency. Cryptocurrencies offer the promise of revolutionary change, but they also have severe downsides as a replacement for fiat money, including volatility, high transaction costs and complexity of storage for the average non-technical person. 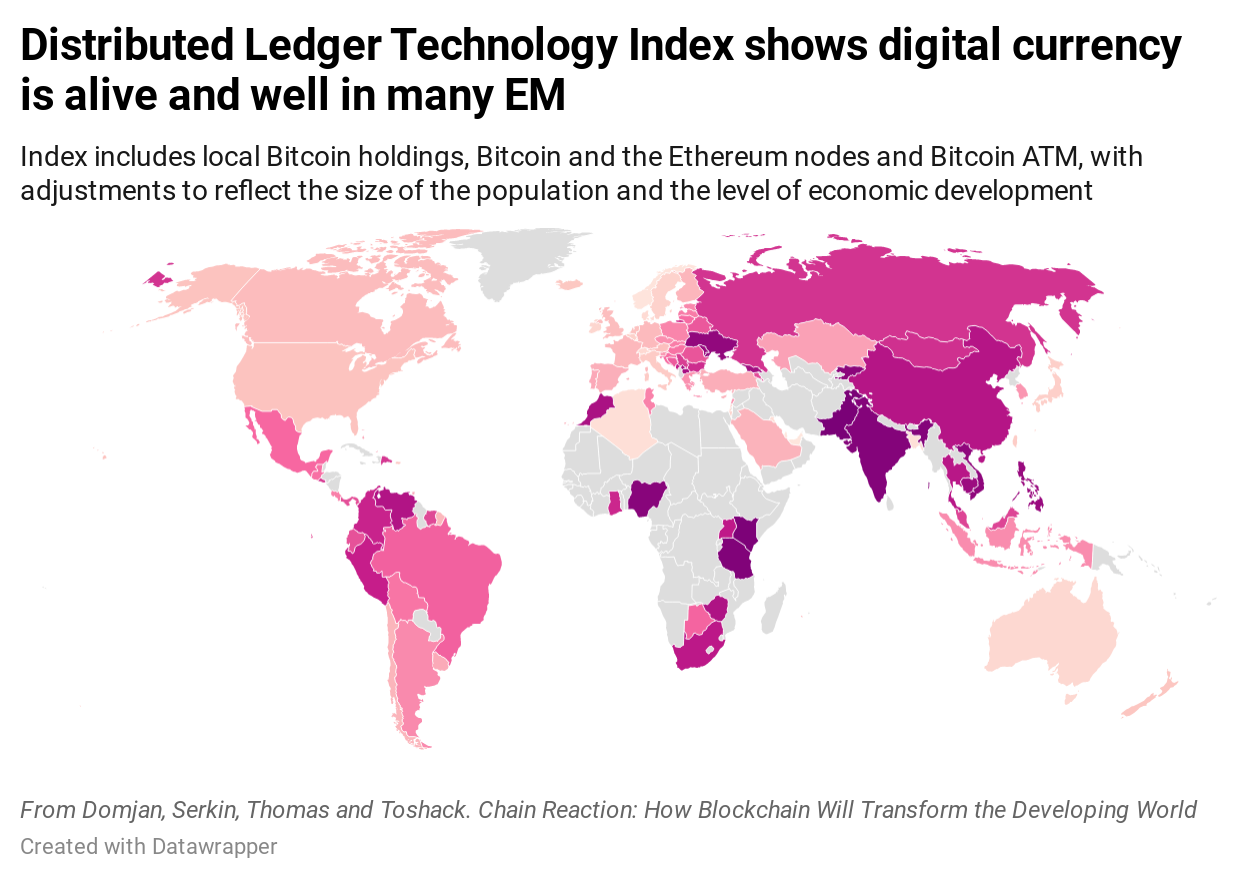 While Shakawe is celebrating a full year of readily available cash, the rest of the world is moving in the other direction. Covid-19 has led businesses, consumers and central banks to realise the potential role of money as a vector for transmission of disease. Kenyan matatus are slowly going cashless, while drug dealers in developed countries now have a set of standards to reduce the danger of handling cash during the Covid-19 epidemic.

In developed countries, credit cards are a perfectly good replacement for cash as a means of exchange, just as mobile money is in many emerging markets. However, inflation, depreciation risk, capital controls and low banking penetration mean that, in many developing countries, local currency remains an imperfect solution for the two other functions of money: as a unit of accounting and as a store of value. High levels of cryptocurrency holdings in some emerging markets, including India, Pakistan, Venezuela, Nigeria, Kenya and Colombia, suggest that the problems of local fiat currencies are so great as to make cryptocurrencies attractive, despite their practical drawbacks. 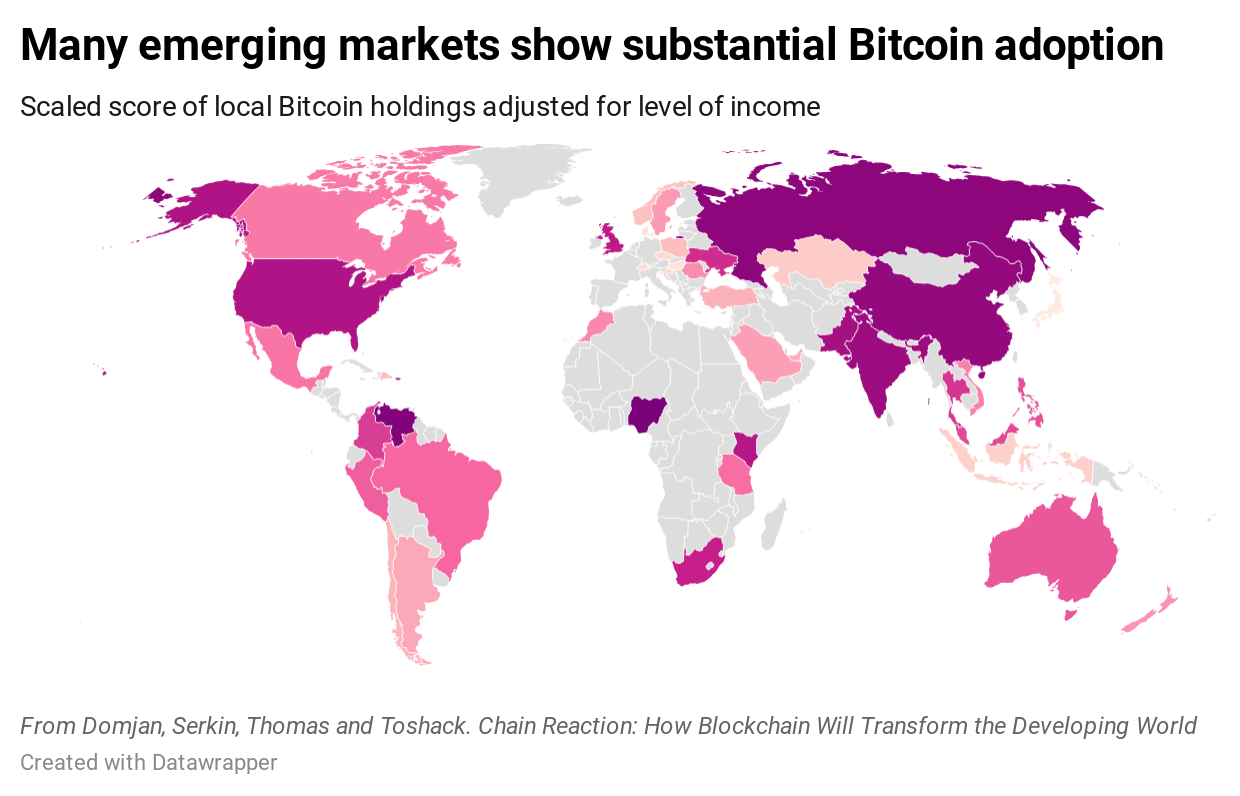 But this could all change in 2021 as central banks enter the digital currency game. 2020 has seen a flurry of announcements about forthcoming digital currencies from the People’s Bank of China, the European Central Bank, the Bank of England and the Monetary Authority of Singapore. The Banque de France has even launched an open call for applications to experiment with central bank digital currency (CBDC). The Bank for International Settlement and seven major central banks have established a set of principles for CBDCs. In the UK, the Chancellor has also promised to introduce a regulatory framework to allow commercial banks to introduce their own stablecoins. CBDCs will more evolutionary then revolutionary. Unlike cryptocurrencies, which are designed around a permissionless and transparent architecture, the issuing central bank will be able to design in terms of use and limitations, and the same will be true for bank-backed stablecoins.

Nevertheless, CBDCs could easily solve the problems that have driven many people in the emerging market world to adopt cryptocurrencies. Crisp US dollars represent the gold standard of money in the developing world – it is shocking to reflect on the fact that I regularly, out of necessity, travel around Africa or emerging Asia with piles of banknotes that I would never consider carrying on my person in London or New York. Electronic dollars (or euros) would be a far superior alternative, both easier and safer to hold and exchange.

Thus, the key question isn’t whether CBDCs can solve the problems of the developing world, but rather whether developed country central banks will allow them to do so. Will individuals be allowed to hold CBDC? If so, will they be able to hold and transact with them outside of their country of issuance? One can do so with both physical cash and cryptocurrency, but what about CBDCs?

Although one would be forgiven for assuming that a CBDC will be a central bank-backed cryptocurrency, the actual shape of CBDC is far from clear. 2021 is likely to be the year that we get answers to the key questions that will determine whether they will live up to their potential for citizens of developing countries:

Will CBDCs be broadly available? Today, central bank money exists in two form: cash and deposits at the central bank, which are only available to commercial banks. If individual citizens wish to deposit money, they need to trade their central bank money for private money, a choice that many in developing countries are understandably loathe to make. There is a robust debate about whether CBDCs should be available to banks only or to the wider public and, if they are available to the wider public, how to prevent people from taking money out of banks, thereby impeding credit intermediation. This ECB working paper reviews the issue and proposes a system of tiered interest rates to allow the public to hold CBDCs without making bank deposits unattractive.

Will CBDCs be a unit of value? If CBDCs are going to be available to the wider public, they could take two forms. On the one hand, central banks could create a cryptographic token that has independent cash value, as bank notes do today. In essence, this would be central bank cryptocurrency. Sweden is considering this option. On the other hand, central banks operate a central ledger system, in essence allowing individuals to have central bank deposit accounts and make payments between them. Uruguay took this approach in its sophisticated CBDC pilot. Box A in this BIS working paper discusses the Uruguayan and Swedish thought processes with general-purpose CBDC. Crucially, if CBDC is operated through a ledger system, as in the Uruguayan example, one would need to open an account with the central bank to access it, and that facility will likely only be available to residents.

If CBDCs are a cryptographic unit of value, will non-residents be able to hold and exchange it? How will they be exchanged? Will there be a proper distributed ledger architecture, enabling them to be held and engaged globally on multiple exchanges, or will the issuing central bank act as a monopoly exchange, limiting who is able to transact and where?

If the answer to all three questions is yes, then widely circulating CBDCs could be a huge success in emerging markets, drawing funds from local bank balances, cryptocurrency holdings and piles of dollars under the bed. If the answer is no, they are more likely to become niche payment products in their countries of origin.

At first glance, one might assume that central banks will seek to maintain control over their CBDCs and answer no to the questions above. Sweden’s Riksbank is to consider a value-based token based on a distributed ledger because operating accounts for the general population falls outside of its mandate. Mandate concerns could drive central banks to choose more open approaches to their CBDCs, but two other factors seem more likely to be influential: the US dollar and fear of Big Tech dominance.

Rumours of USD’s demise are persistent and typically overstated, but if another country wanted its currency to steal a march on the US dollar, one way to do it would be to launch a widely circulating CBDC. If the People’s Bank wants to see the yuan displace the dollar as the standard for trade in the emerging world, a widely circulating crypto-yuan could be a clear step on that path.

Meanwhile, many governments are worried about the risk that one of the tech giants could dominate global payments with its own cryptocurrency. Although Libra is no longer going to be the centrepiece of Facebook’s digital payments architecture, the political uproar it prompted shows that governments are committed to avoiding Big Tech dominance of digital currency. A widely circulating CBDC that sapped demand for private-sector alternatives would be an obvious way to do this. 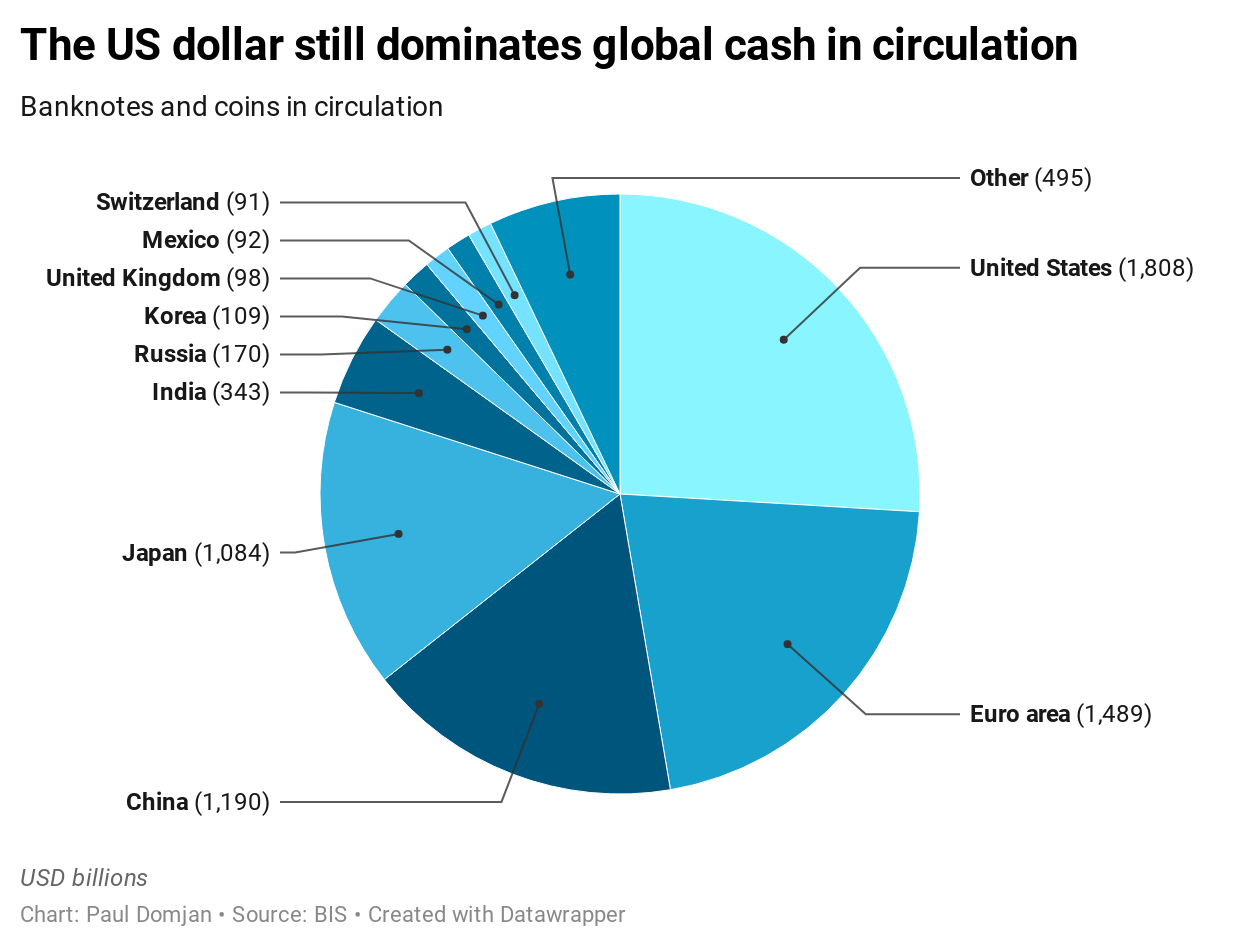 Author’s note: Thanks to Brandon Thomas, one of my co-authors, for his feedback on this note.