As part of our series on technological disruption and the digital banking revolution in EM, we analyse the top platforms for mobile payments and transfers – often called 'mobile money' – in 30 countries (see Figure 5 for the detailed list) to understand what types of business will thrive in this highly competitive and rapidly evolving industry.

Three business models are battling for supremacy – platforms operated by:

Implications for investors. Traditional banks will retain ownership of the financial services sector in the short term, but providers of mobile money services will gain market share given their growing competitive advantages in terms of scale, operating costs, convenience and customer knowledge. Figure 1 shows where to look to gain exposure to that story.

Over 95% of the top mobile money systems in developing markets are operated by telcos or independent fintechs (Figure 2). 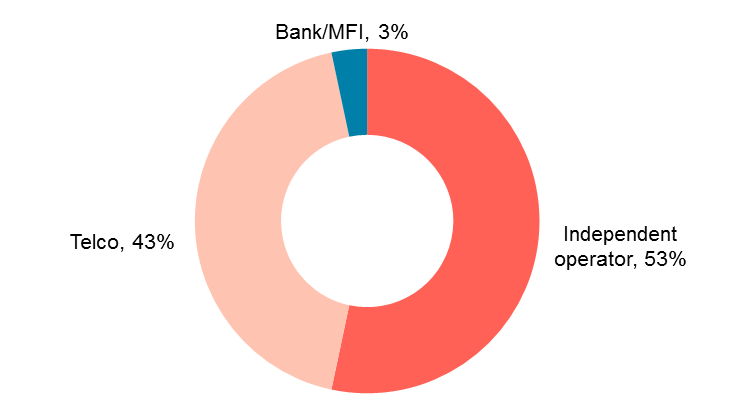 In fact, in the markets we have analysed (Figure 3), only Bangladesh’s bKash is controlled by a bank – BRAC Bank – and even that was launched in partnership with a fintech firm – Money in Motion LLC, which also played a key role in M-Pesa’s development in Kenya.

Elsewhere, all the top mobile money operators in our survey are either controlled by telcos, individual entrepreneurs or tech-focused companies (Figure 5).

In more financially developed markets, mobile money opportunities tend to be scarce. This is a key reason why such platforms have not really taken off in South Africa, where c70% of adults already have bank accounts.

Banks: A lack of focus and understanding

Many banks have started mobile money operations, but few have been successful. We think this is because of the typical organisational focus of commercial banks around a relatively small number of big-ticket customers, and also given their near-term, returns-focused culture.

The mobile money business has very distinct characteristics and, consequently, requires a very different mindset. Ticket sizes are typically small and the effort-to-reward ratio is initially quite unfavourable – bottom lines can take several years to move into positive territory.

Other key differences include the much greater competitive benefit of scale, and the vastly superior medium-term growth trajectory of mobile money in most markets.

Indeed, we think it is a matter of time before mobile money operators start posing a substantial threat to traditional banks. For example, Ant Financial already operates one of the world’s largest money market funds (Yu’e Bao), and has started providing other financial services, such as insurance, loans and credit scoring.

Thus far, industry leaders such as M-Pesa in Kenya and bKash in Bangladesh have been working in tandem with banks (for example, through the Fuliza micro-lending product), but these could well be temporary alliances.

The interface for mobile money services is generally a mobile phone (either a smartphone app or a USSD-based system) –an area in which telcos (and, increasingly, fintech startups) tend to have much more knowledge of customer behaviour and preferences than banks.

In addition, telcos’ customer bases tend to be much larger than those of the banks, for two reasons:

Read our 2020s Vision theme – 'In Africa, telcos will make the best banks' – for more details.

Fintech operators benefit from the scale of parent operations

In many cases, fintechs are owned by tech-focused firms providing other consumer services such as e-commerce or ride-hailing. The scale of these operations allows mobile money fintechs to quickly roll out payment services to their in-house networks initially, with the scope to expand externally thereafter. Alibaba’s Alipay, Grab’s GrabPay and Apple’s Apple Pay are prime examples.

In addition, management teams at these companies have very tech-focused mindsets, which helps them quickly scale their businesses.

Which model will win? Well, it depends...

As shown in Figure 4, we think there are various ways the mobile money story will ultimately play out in each market. Key criteria include:

We think this thought process helps explain why Safaricom’s M-Pesa has been the runaway mobile money leader in Kenya, while, in Bangladesh, bank-controlled bKash has succeeded. 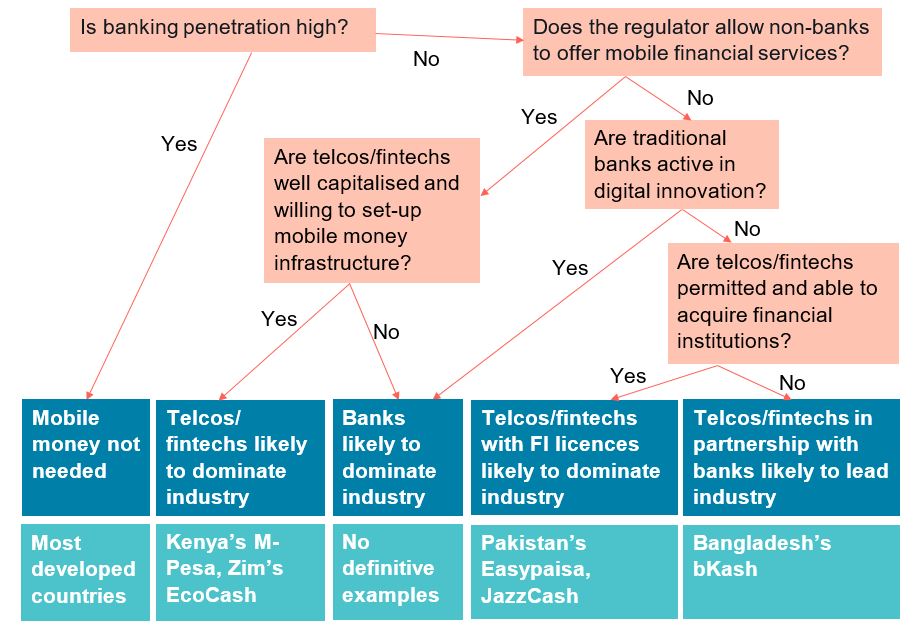 Although we see traditional banks retaining ownership in the short term of the financial services sectors in all the markets we have analysed, our view is that mobile money providers will increase their market shares, given their growing competitive advantages in terms of scale, operating costs, convenience and customer knowledge.

IPOs of mobile money operators can also be expected over the next few years (eg One97 Communications, Paytm, in India).