Which African Eurobonds offer the highest return to risk ratio?

Market reports are that the Chinese commodities exchange in China is seeing lower levels of liquidity as investors are spooked about the spread of the COVID-19 virus through the country’s industrial heartland and Beijing’s harsh lockdown measures to stamp it out. The top steel making hub of Tangshan and the commercial hub of Shanghai have witnessed severe lockdowns which is making commerce difficult, from manufacturing to logistics, all have been affected.

Equally concerning is the fact that wild price swings in commodities and the subsequent raising of margin calls at exchanges are resulting in many participants withdrawing from the market as it has become too expensive to participate. This has resulted in further volatility as liquidity is sapped from trading pits.

Egypt: In a statement released yesterday, International Monetary Fund Mission Chief Celine Allard said that Egypt has requested IMF support to implement an economic program. According to Allard, the IMF is working with Egyptian authorities to prepare for program discussions with a view to supporting “our shared goals of economic stability and sustainable, job-rich, and inclusive medium-term growth for Egypt.” Allard further said that the rapidly changing global environment and spillovers related to the war in Ukraine are posing important challenges for the country. According to Allard,  a set of macroeconomic and structural policy measures would mitigate the impact of this shock on the Egyptian economy, protect the vulnerable, and preserve Egypt’s resilience and medium-term growth prospects.

Ghana: Information Minister Kojo Oppong Nkrumah yesterday said that Finance Minister Ken Ofori-Atta would announce spending cuts on Thursday, alongside other measures to meet a unified deficit target of 7.4% of GDP this year from an estimated 12.1% of GDP last year. Nkrumah further said that “we are looking at the 7.4% deficit figure. We are examining all expenditure lines of government and exploring how and where we can cut to achieve it.” Ghanaian authorities are stepping up efforts to halt a sell-off in the country’s foreign debt triggered by concern that the country won’t achieve revenue and debt targets announced by Ofori-Atta in November.

Kenya: The budget committee has reported that National Treasury has asked lawmakers to approve KES 138.86bn ($1.21bn) in extra spending for the fiscal year through June. The supplementary budget widens the deficit by KES 88.6bn, which will be financed through external loans and the International Monetary Fund. The fiscal deficit may widen further than the projected 8.1% of GDP by the end of June 2022, as the revised revenue targets are unlikely to be reached. According to lawmakers, the additional borrowing to fund the supplementary budget is "contrary to the fiscal consolidation path" and will ensure Kenya will be put firmly back in the rating agencies' crosshairs.

Tunisia: Amid growing concerns of debt default, an International Monetary Fund delegation is set to arrive in Tunisia on Friday for talks with the government and other groups. According to an official from the powerful Tunisian General Labour union, after talks with the government and central bank, the IMF will have discussions with the union on April 1. Last week, Fitch downgraded Tunisia’s sovereign debt rating to CCC from B-, reflecting heightened fiscal and external liquidity risks due to delays in agreeing on a new IMF deal. Union opposition has been among the factors hindering earlier attempts by successive Tunisian governments to cut government spending and tackle other key issues.

Uganda: Finance Minister Matia Kasaija has said Uganda plans to implement policy measures to limit the impact that supply shocks caused by the coronavirus pandemic, the reopening of economies, and Russia’s invasion of Ukraine are having on living costs and output. Uganda is a net importer of crude and materials used to make basic goods such as cooking oil and soap, the prices of which have been rising due to the disruptions. Kasaija added that the government is working with the private sector to produce domestically some of these intermediate goods used to produce most of the affected goods, such as cooking oil & soap. Furthermore, the government is also considering regulating fuel-price movements and instituting probes into artificial supply shortages caused by unscrupulous speculators to contain cost pressures.

South Africa: Inflation came in slightly softer than expected in February, printing at 5,7% y/y unchanged from the previous month. On a monthly basis, consumer prices rose 0.6% in February. The Stats SA report shows that the main contributors were food, transport, and administered prices. Potentially of more importance was the core inflation reading, which came in at 3.5% y/y, well below the midpoint of the SARB’s inflation target, a clear indication that demand-side inflationary pressures remain weak. Be it marginally weaker than expectations, the February CPI print has seen the professional market readjust its rate hike expectation lower.

The Tanzanian Shilling (TZS) has come under some pressure at the start of the year owing to increased importer demand and reduced inflows. According to Bloomberg data, the TZS has lost around 0.60% on a year-to-date basis against the USD and is trading at a more than 6-month low. Quarterly data from the Bank of Tanzania released yesterday showed that the current account deficit widened further is likely to further detract from the Shilling's resilience. 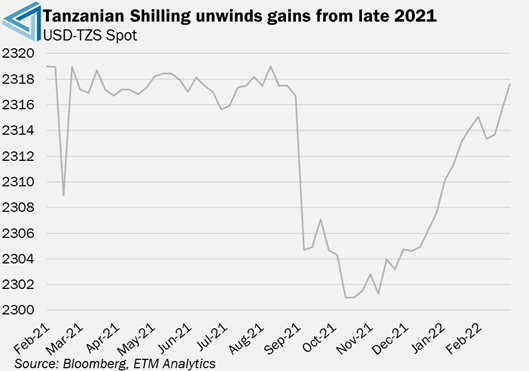 Specifically, the current account deficit widened sharply to $769.1mn in Q4 2021 from a deficit of $6.8mn in the corresponding quarter of 2020. The widening of the deficit resulted from a rise in the imports of goods, particularly oil shipments. During Q4, the value of goods imported rose by 49.5% to $3,014.0mn. All categories of goods import increased, with a majority of the increase registered in oil, owing to a persistent increase in prices globally. With oil prices remaining elevated, imports may continue to rise and further pressure the current account balance. The value of exports, meanwhile, increased to $325.2mn from $230.5mn in Q4 2020 on the back of exports of cosmetics, iron and steel, plastic and paper products.

A widening current account will add further downside pressure to the local currency. However, it is worth noting that an improving investment outlook, a strong reserve position, and export proceeds from gold and tourism should provide some support in the near-to-medium term.

In addition to ETM’s Proprietary models, such as the Fiscal Risk and Political Risk models, one of the measures we look at to identify relative value in African Eurobonds is credit ratings vs sovereign bond yields. In this instance, we plotted the sovereign credit score (Moody’s) of several African hard currency bond issuers on the X-axis against their respective 10-year Eurobond yields, which are plotted on the Y-axis. As would be expected, for the most, the lower the credit rating, which is reflective of higher fiscal risk, the higher the Eurobond yield, which is essentially the fiscal premia demanded by investors for holding the respective Eurobonds. 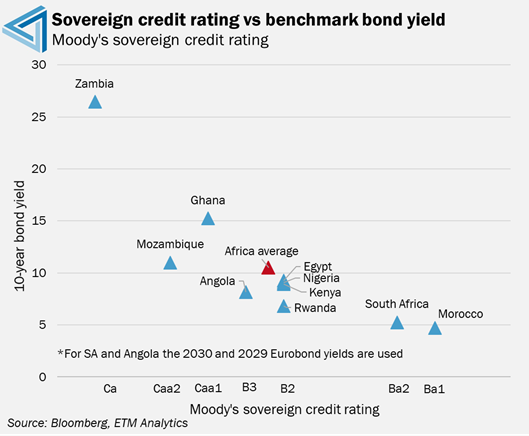 Looking at the chart, we see particular interest in the countries with a credit rating of B2, namely Egypt, Nigeria, Kenya and Rwanda. While the four countries all hold the same level of fiscal risk according to Moody’s, Kenya sticks out like a sore thumb in ETM’s Fiscal Risk Model, ranking well below Egypt and Nigeria in overall fiscal risk. For context, ETM’s Fiscal Risk Model looks at how fiscally fragile a country is and whether the fiscal risk of a country is increasing or decreasing.

Therefore, it raises the question of whether it is more attractive to hold Egyptian and Nigerian bonds over Kenya bonds when looking at the risk to return trade-off of the three countries. According to underlying fiscal fundamentals, ETM’s Fiscal Model would suggest so. In addition to the underlying fiscal dynamics of a country, investors should also keep close tabs on idiosyncratic developments such as the upcoming election in Kenya, Egypt’s looming deal with the International Monetary Fund and the benefit soaring oil prices is having on Nigeria’s economy.

Heading into the March 24 SARB MPC meeting, we expect the SARB to deliver a third consecutive 25bps rate hike as policymakers look to rein in inflation expectations, which have surged on the back of soaring commodity prices particularly food and oil. ETM's proprietary indicators suggest that while headline inflation could threaten the upper limit of the SARB's 3-6% inflation target range in the near term, inflation will moderate later this year as supply chain pressures ease and high base effects kick in. 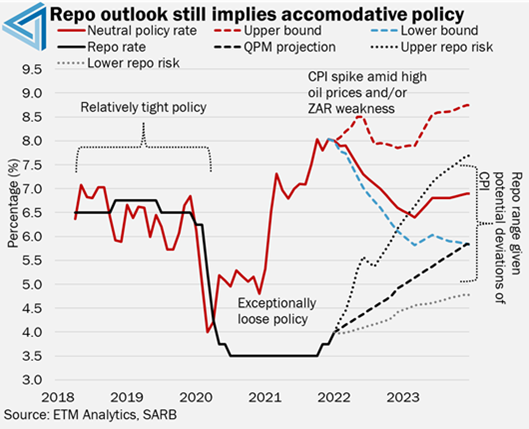 Given SA's relatively contained inflation outlook, the market is still pricing in too much rate hike risk, with traders pricing in substantial risk for outsized rate hikes for the upcoming five MPC meetings. The economy is weak, the credit cycle soft, and the ZAR resilient. It is not the kind of environment that would result in runaway inflation.

SARB guidance suggests it could lift the repo rate to 6% by the end of 2023. The risk to the SARB's QPM forecast rests on the downside through 2023, especially if growth disappoints. In contrast, ETM expects up to five hikes through 2022, but with an increasing probability of a pause towards year-end if inflation surprises to the downside. 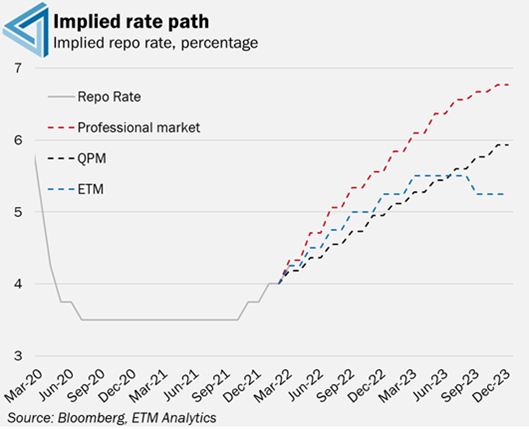 It is always useful to calibrate expectations by assessing the SARB's Quarterly Projection Model (QPM) vs what the market anticipates and in-house expectations. The QPM has been relatively stable in recent quarters and has continued to target a repo rate rising back up to 6%. This forecast assumes an inflation rate that remains buoyant and a SARB that seeks to lift interest rates back to a neutral level.

In the short-term, the risk to the SARB's expectations rests with the SARB doing more to contain inflation expectations in the face of a commodity and energy price shock while also wanting to keep pace with the tightening of the Fed.

Longer-term, the risk is that the SARB is overestimating the pass-through into inflation. Historically, one of the criticisms of the QPM is that it has not been sensitive enough to the weakness of the credit cycle, which would curtail the degree to which interest rates might need to rise. ETM's repo rate expectations reflect this.

Although the professional market has increased bets for outsized interest rate increases in South Africa, we believe the market is overly hawkish. The SARB was pre-emptive with its first two rate hikes. This has helped ensure that policy tightening will likely be gradual, especially when considering SA's benign economic outlook. While inflation risks have intensified and the ZAR remains susceptible to a sell-off should the supportive market conditions deteriorate, we believe that the SARB will deliver up to five more 25bps rate hikes in 2022, taking the Repo Rate to 5.0 -5.25% by year-end. However, the risk is that they flatten that trajectory and reach for the pause button in one or more meetings later this year to be more sensitive to growth.