Where are we going next? Introducing the Tellimer Travel Matrix

Last week, I introduced our Tellimer Readiness for Reopening Index, which measures which countries are likely to be able to reopen safely first. I found that the UK, China, Israel, Hong Kong, the UAE, Chile, Qatar and Morocco appear to be ready for reopening, with the US, parts of the EU, Malaysia and Saudi Arabia strong candidates to follow suit. But I was only able to touch on the question on many readers’ minds: what does this mean for travel, and specifically aviation? Will tourism-fuelled economies, from Georgia to Greece and from Mexico to Malta, recover? How strongly will airlines recover, and which ones will be positioned for success? And, where will you be able to go on a summer holiday?

As long as global variations in vaccination continue, vaccine passports are coming. Emirates has already tested them in live flights, and Greece is introducing them for tourists from Israel. While not a vaccine passport per se, the new EU-wide “Green Digital Certificate” is a vaccine passport by stealth, and I expect that it will be strengthened as a vaccine passport once the EU’s vaccine roll-out is well underway. Opposition to vaccine passports will be deep in some communities, especially in the US, but in others it seems much shallower once the public realise what they can achieve. Indeed, the inclusion of the FA Cup final as one of the UK’s vaccine passport demonstration events is credited with turning public opinion strongly in favour of vaccine passports. Whether I use my vaccine passport to visit the beaches of Greece, the UAE, or Israel, or use it to return to the UK without quarantine from the Swahili Coast or Lake Malawi, my vaccine passport will be a key part of my future travel plans. Don’t have a vaccine yet? Alaska is trying to jumpstart tourism by offering a free jab on arrival.

Airlines are going to do their best to make this work because the partial return of slot rules in 2021 means that they will be flying, with or without passengers, to keep their slots at prime airports. In 2020, airlines stepped back and let governments figure out how to handle the disease, but with slot rules returning, they will be a powerful lobby for vaccine passports. Meanwhile, given the cost and complexity of testing for those without vaccine passports, I continue to believe that business travel, and so-called ‘bleisure’ that blends business and holiday, will become a crucial part of the travel recovery in 2021, which has been corroborated by stronger demand for premium classes of service on long haul routes, especially Emirates’ new Premium Economy, which is clearly pitched at this segment.

Data on aviation during Covid are surprisingly hard to come by. Fortunately, the US Department of Transportation’s Bureau of Transportation Statistics measures passenger seats, and available seats, on all segments flown within, into or out of the US, and the data goes up to January 2021. In 2019, North America represented 22% of global passenger travel, as measured in revenue passenger kilometres, and, given that routes are often shorter than in Asia, it can be expected to represent a larger share of passenger segments. Thus, while the data are far from comprehensive, they give a useful picture of how travel is evolving.

I look at two different measures: the total number of passenger segments flown and load factor – the percentage of seats that are filled on a per segment basis. If a plane flies from Dallas to Chicago, stopping in Wichita, a passenger who takes the entire flight is registered as having flown two domestic passenger segments. Similarly, if a passenger flies from Austin to Dakar, changing planes in Dallas and New York, they will be recorded as having flown two domestic segments and one international segment. 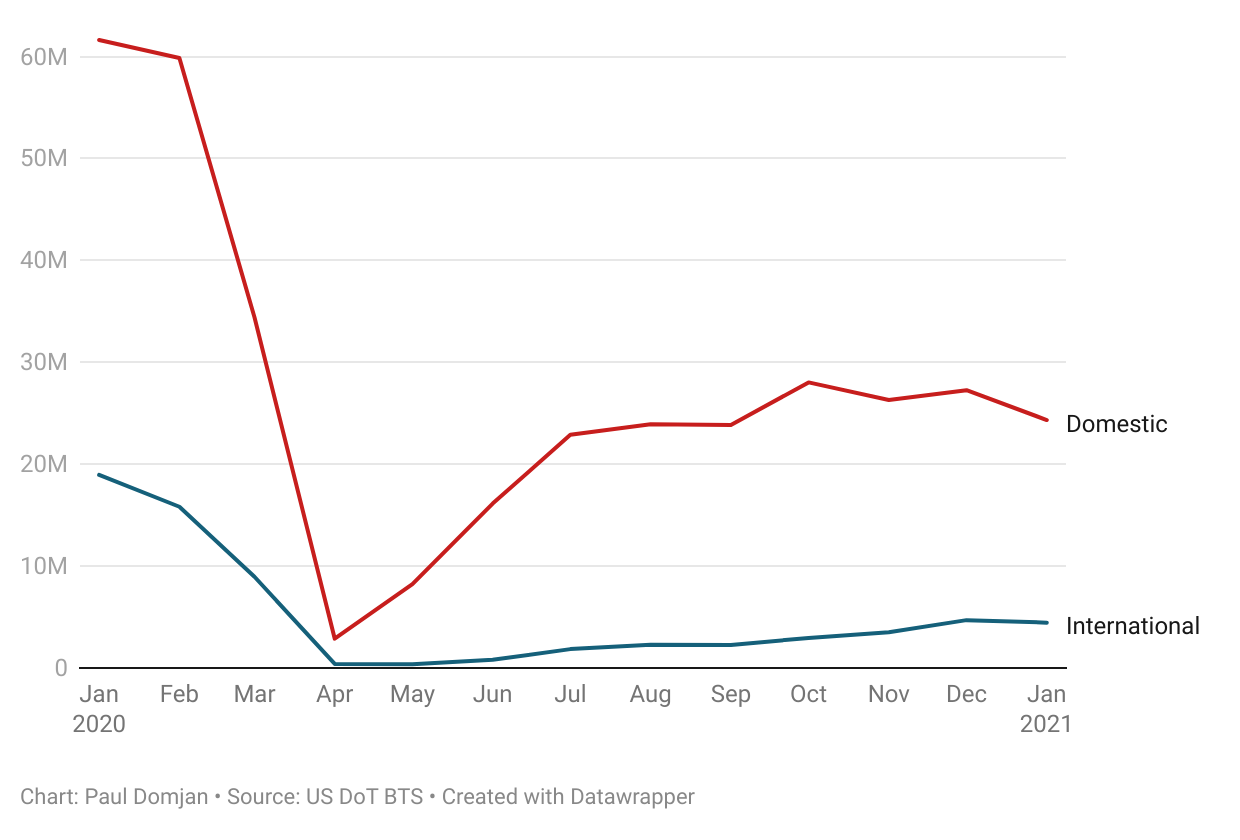 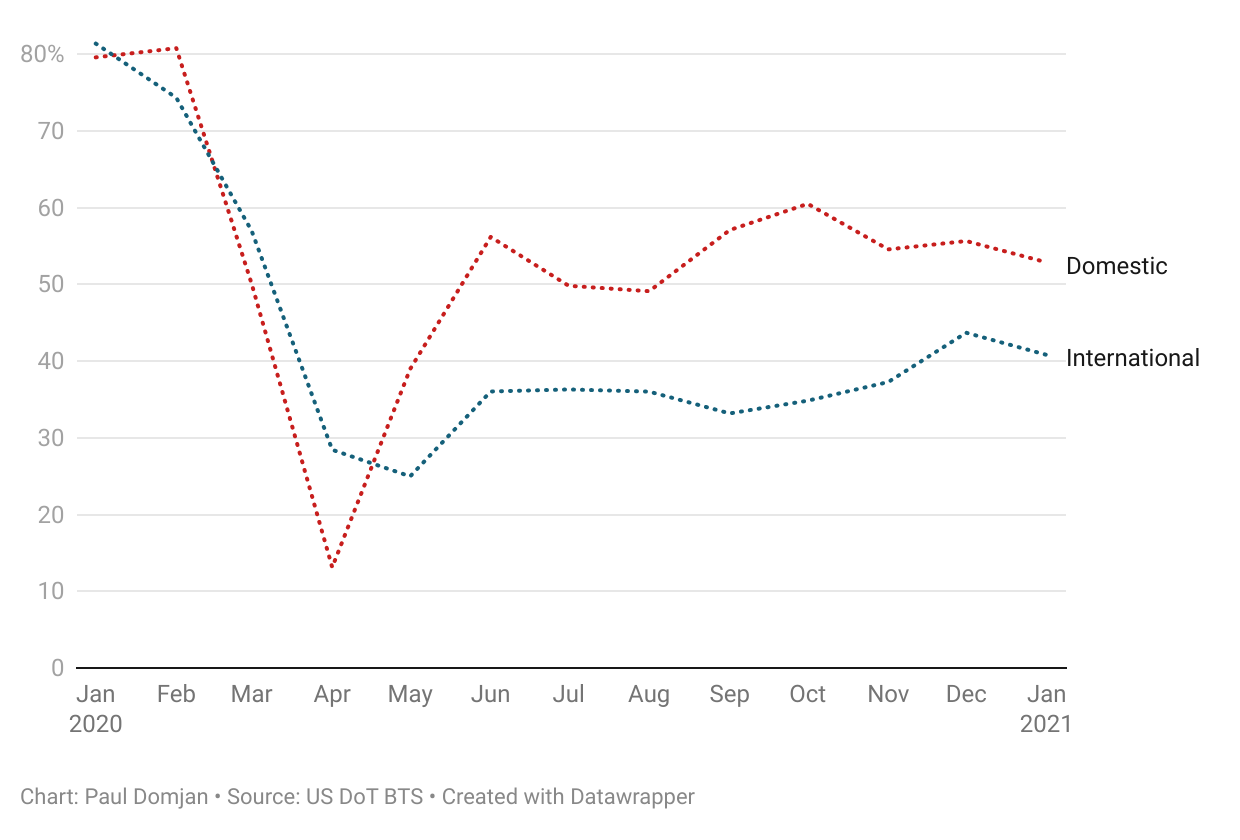 In addition to using the absolute numbers, we can also compare with the same month in the prior year to measure the extent of the recovery compared with pre-Covid.

Figure 3: Change versus prior year 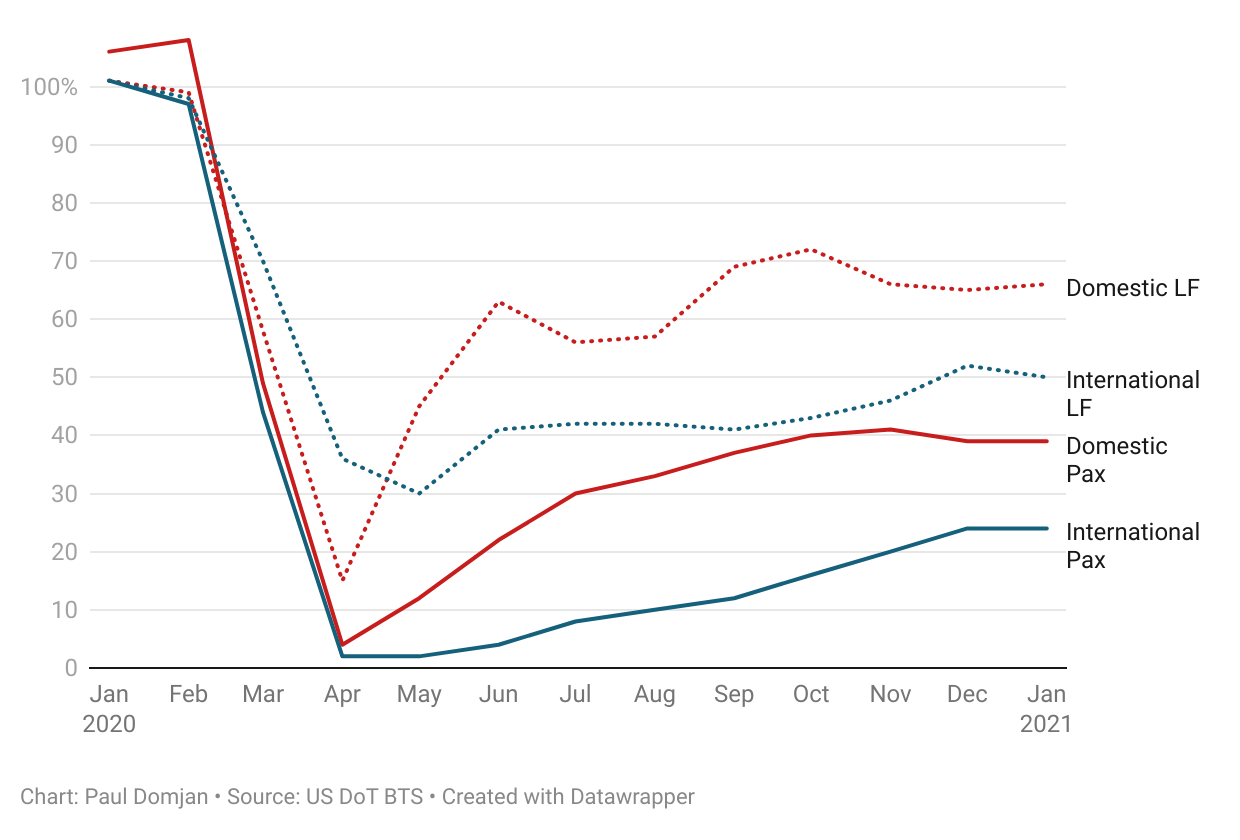 Domestic passenger segments peaked in October, as did both load factor and passenger numbers of a percentage of the pre-Covid prior year. As in many countries in the northern hemisphere, Covid cases in the US began to accelerate in October, peaking in January, so the peak in domestic travel appears to reflect a combination of both new lockdown restrictions and passengers choosing not to travel for fear of contracting Covid.

By contrast, international travel continued to grow steadily through the end of 2020, before plateauing or slightly declining, depending on the indicator used in January, which is a typical trend pre-Covid and consistent with the available global data for January.

We can only speculate at the stronger recovery of international travel. One possibility is that the greater restrictions on international travel, for example many foreign countries required Covid tests when the US did not, may have contributed to continued growth. Indeed, passenger numbers on foreign carriers – which could be perceived as safer to fly than domestic carriers both because they will be following foreign Covid protocols, which in many cases are stricter than those of the US, and because they fly predominantly from international terminals, where travellers would be exposed to many fewer domestic connecting passengers – continued to grow in January, even while international passenger numbers on US airlines fell back.

Where can I go next: The Tellimer Travel Matrix

Where you can go will depend on where you start. Dividing the world into four groups of countries enables us to explore how travel is likely to be managed between them. The four groups are:

Using these four categories, we can map the likely travel restrictions. Where travel is severely restricted, it is likely only going to be open to returning citizens and those who are permanently relocating. Where it is only restricted, the list of acceptable reasons for entry will expand, but travellers will still need to justify their trip. 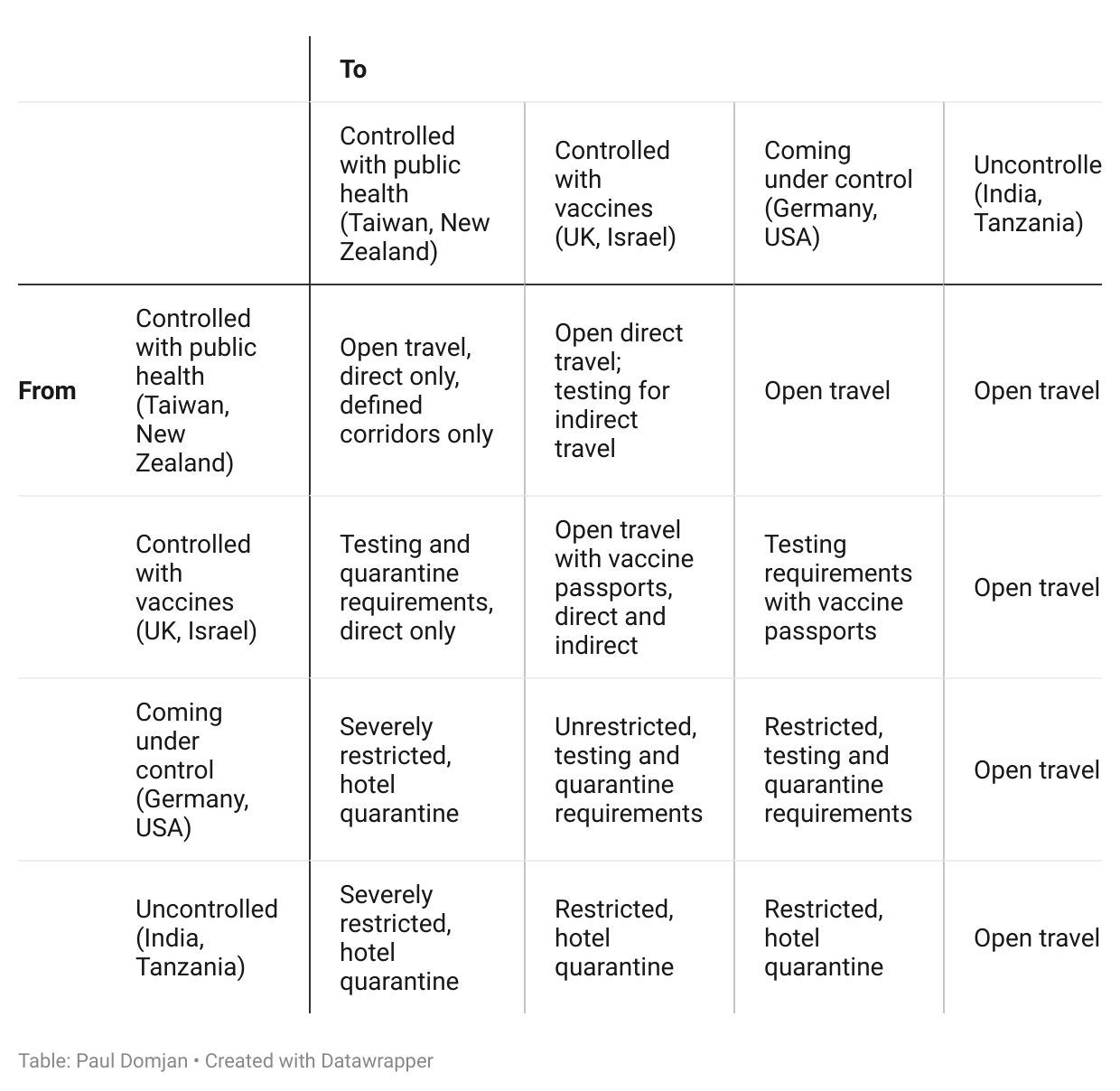 The main exception to this with be tourism-driven economies in the third (“coming under control”) category, which are likely to use less stringent conditions and open access to tourists with vaccine passports to jump-start tourism, accepting the possible health cost in the autumn after a summer economic boost.

Bad for the super-connectors

The super-connectors, Emirates, Etihad, Qatar and Turkish, have thrived by channelling East-West (or, more often for me, North-South) traffic through their hubs in the Middle East. However, those hubs provide an ideal nodal point for transmission of the virus between travellers from lower- and higher-risk countries. Moreover, they may also act as channels for travellers from high-risk countries to enter low-risk ones. As such, many countries may seek to impose additional restrictions on super-connectors. Indeed, despite its high vaccination levels, the UK has placed the UAE on its red list and suspended direct flights to avoid importing the more virulent South African Covid variant. It is unlikely that the UAE would have found itself in this position were it not for Emirates and Etihad. The super-connectors know that they are at risk and are seeking to take preventative measures: Emirates operated the first vaccine passport flight, and Etihad became the first airline to vaccinate its operational crew.

But this is unlikely to be sufficient to defend the super-connectors’ position. With the International Air Transport Association expecting aviation demand to recover fully only in 2024, health risks associated with the super-connectors also provide an opportunity for protectionism by stealth.