When countries behave badly: The tortuous morality of ESG investing

Russia is led by a reprehensible government. The Ukraine invasion proves this beyond doubt. Russian assets should not be invested in. Multinationals should exit Russia.

These are the common refrains of so many mainstream media commentators and, increasingly, many high profile multinational corporates, public debt and equity institutional investors and the coterie of sell-side analysts who serve them.

Statements to this effect are being repeated so often that there is seemingly no longer any need to consider and test the argument underpinning them or to test the scope of their implications.

If only ethical conclusions were that simple and universally agreed.

I have a number of questions for those, within the international investment community, who so confidently make these ethically-loaded statements. I do not have the answers but I would, at least, like to pose the questions.

I have written many times about the ESG blind spot of badly behaved countries, both in the emerging and developed markets — most institutional investors do not even bother screening countries for ethical behaviour. My reports on this theme have consistently been among my least read and engaged with. Several of them are linked below. I have little optimism that they will be read now.

The ethical consensus that Russia is not just bad (which is the easy judgement), but "badder" than so many other countries that are still considered investable, appears so confident that no one needs to consider the grey area. But moral discussion is full of grey.

There is an example of an exchange-traded fund (ETF) that, at the start of 2018, bravely pioneered investment criteria around the question of how to treat good or bad behaviour by countries. It is the Freedom 100 EM Index (Bloomberg ticker FRDM US), created by Life + Liberty Indexes (founded by Perth Tolle). 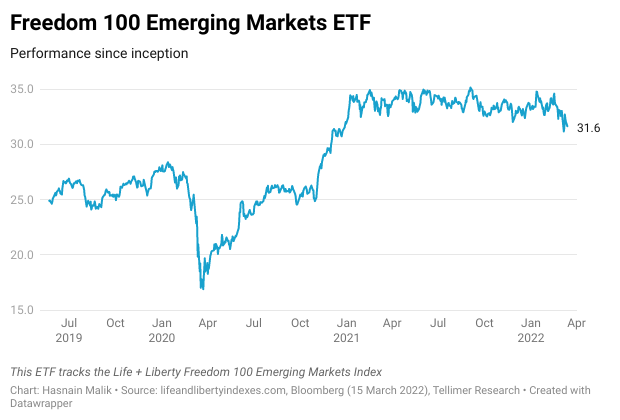 The Freedom 100 EM ETF index is constructed by screening out EM countries with relatively poor scores on third party measures of "personal and economic freedom" from the Fraser Institute and Cato Institute. The remaining addressable universe is then screened for liquidity (on the basis of market cap) and state-owned enterprises are excluded. 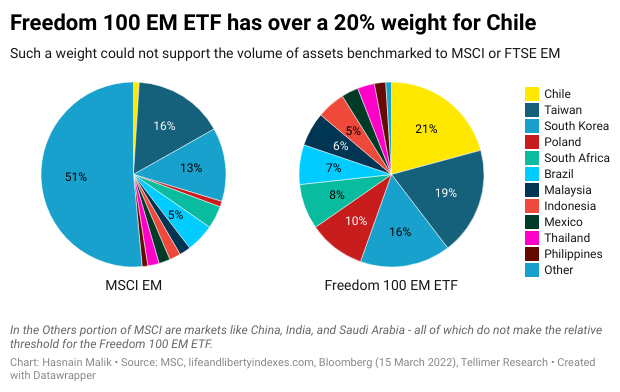 But there are four drawbacks in this approach: 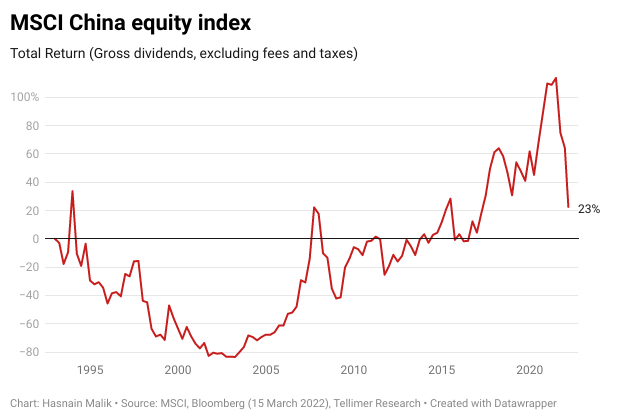 Perhaps, the only truly consistent approach is the unashamedly amoral one? Recognise that the ethical filter for investors is simply too porous and subjective to make a claim that an invesment fund only looks at good countries, when the measure of good and bad is not simply whether the US or the EU choose to sanction that country.

For those still wishing to stir up this hornet's nest and emerge with some useable data, they could do worse than rummage around the Worldwide Governance Indicators (WGI) from the World Bank, the latest version of which was released on 24 September 2021.

While every component of WGI is open to debate, in terms of whether it is a valid measure and whether it is given an appropriate weight, it is at least an annual time series, going back to 2002, and biennially back to 1996, covering every country of potential interest. I hope for those fund managers who embrace WGI that it does not end up suffering the scandalous fate of the Ease of Doing Business data set.

WGI aggregates a myriad of indices and surveys covering six aspects of Governance and Social, calculating scores in a range of minus 2.5 (indicating a very weak score) to positive 2.5 (very strong):

As with most ESG analyses, there are two ways to use the available data: the latest snapshot and the trend of improvement (or decline) over a historic time frame.

The following countries screen well using the 2020 snapshot alone, weighting each of the six aggregate metrics equally — outside Tech Hardware exposure in large EM, there are not a lot of large, liquidly traded EM equity markets on this list (consistent with the staggering 20% weight for Chile in the Freedom 100 EM ETF above).

Our curated version of WGI, with adjustable weights for those who consider, for example, individual freedom to be more important than quality of private-sector regulation, is available in Excel via this link. 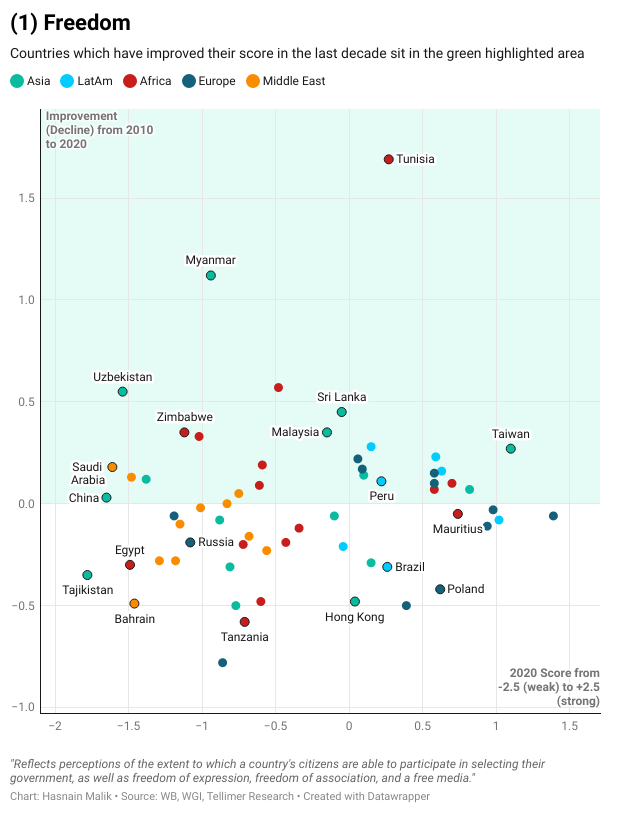 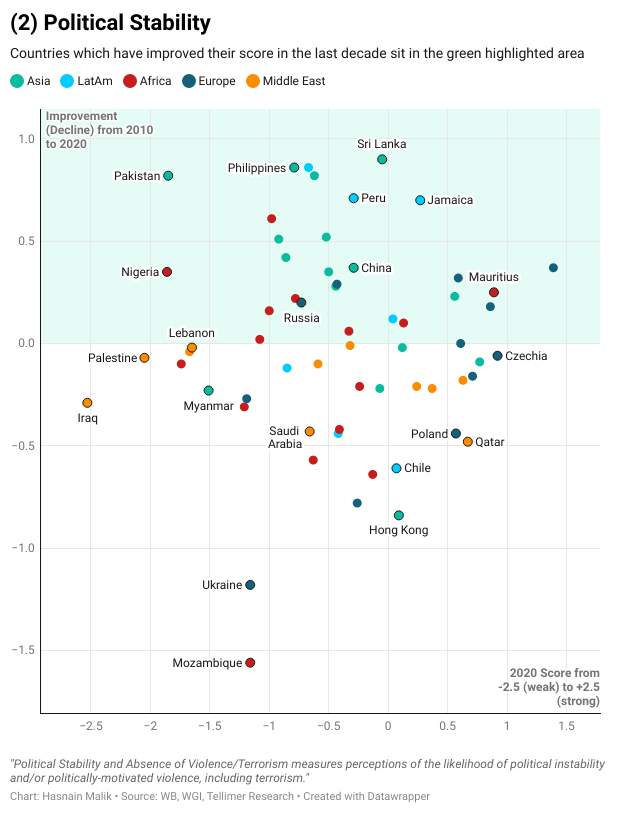 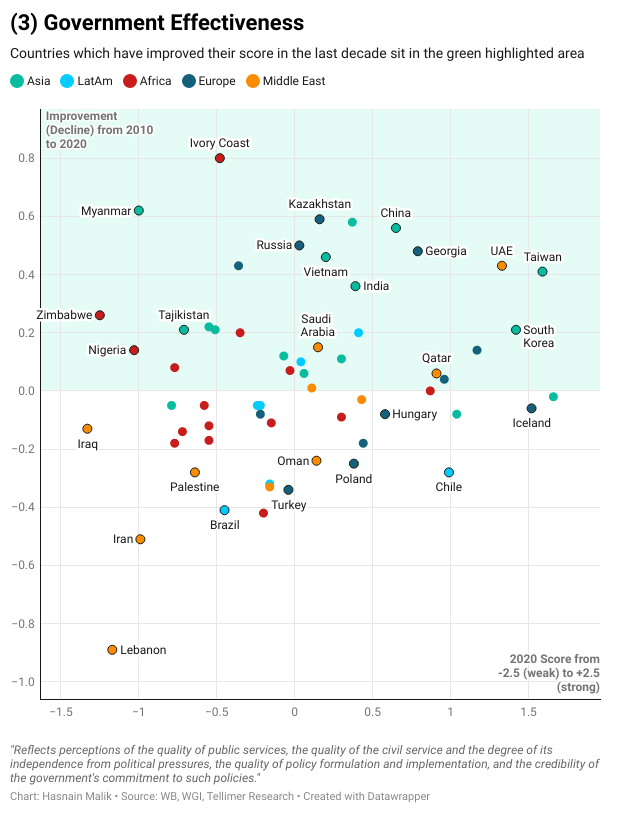 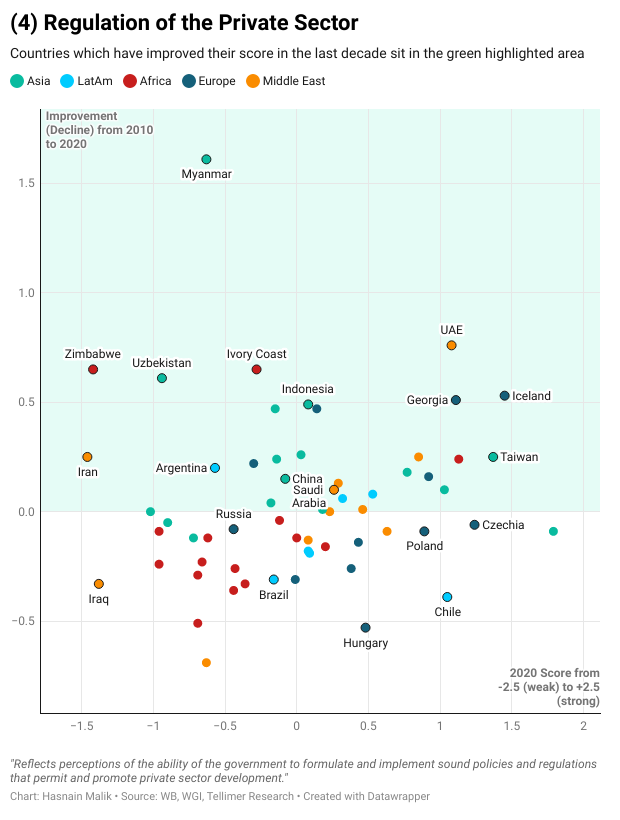 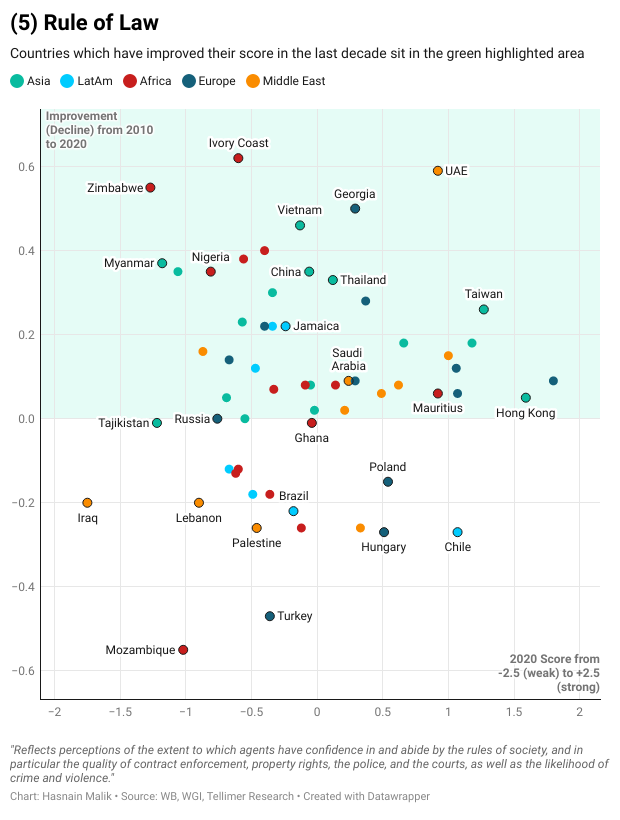 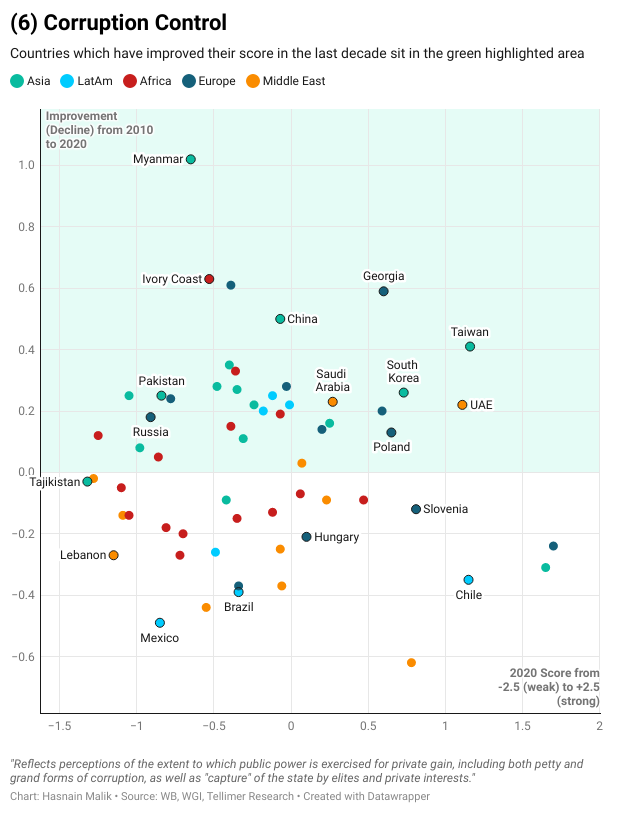 ESG needs to focus on countries, not just companies, Oct 2021

Corruption: FinCEN Files a reminder of challenges for EM and ESG investors, Sep 2020

Corruption: The ugly truth for EM and ESG investors, Jul 2020

Biden's Summit for Democracy and the challenge for ethical EM investors, Nov 2021