WhatsApp payments finally gets the green light in India. We see big losses ahead

Facebook-owned WhatsApp finally has permission to launch its payments service in India. The product will be available in ten regional languages on both Android and iOS, and will make use of the Unified Payments Interface (UPI). Transactions will be free of charge and supported by more than 160 banks.

We outline below why India represents the ultimate prize in digital payments, WhatsApp's strengths and weaknesses versus its competitors, why the road ahead will be challenging (and expensive) and what will differentiate the winners and losers in the coming battle for industry dominance.

With banks having an entrenched position in developed markets, and China already dominated by strong local players like Alipay and WeChat Pay, India represents the biggest global opportunity for digital payments disruptors. The current annual run-rate for mobile payments in India is under US$1tn; in comparison, digital payments in China stands at US$30tn.

As a result, WhatsApp will face competition from industry titans such as Ant Group/ Softbank (Paytm), Amazon Pay, Google Pay, Tencent (Hike) and Walmart (PhonePe). In aggregate, we think there are more than 100 payments providers active in India, all with significant growth expectations, For example, PhonePe had 100mn active customers in October 2020 and is targeting 500mn by end-2022.

Focusing on the UPI platform, the clear industry leaders are PhonePe and Google Pay, with Paytm and Amazon Pay also active. 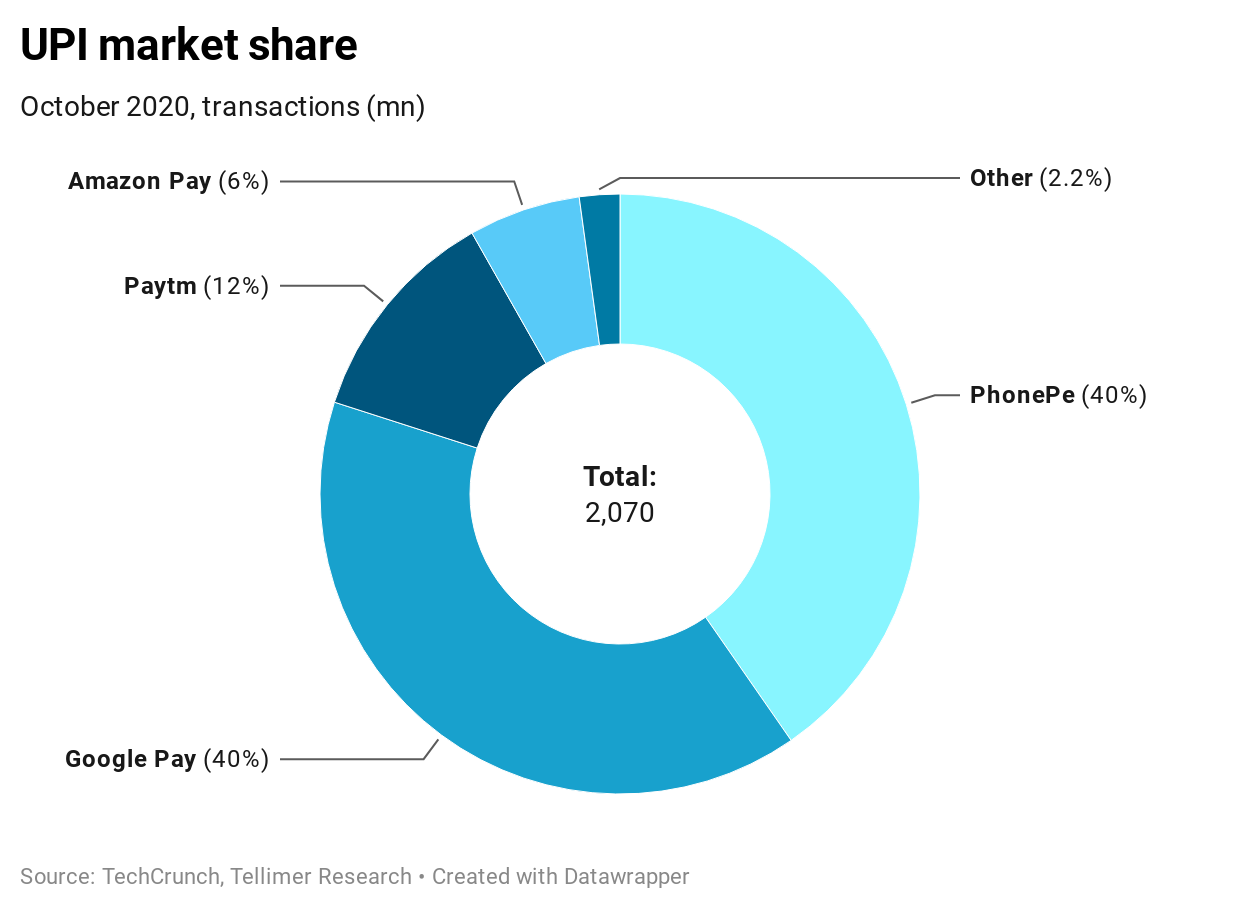 Despite India’s obvious attractions, it is a competitive marketplace with significant restrictions (see below) clouding the path to profitability. Accordingly, payments operators hoping to see out the endgame are likely to need extremely deep pockets.

WhatsApp is the dominant messaging app in India

With more than 400mn users (out of a global total of over 2bn), India is WhatsApp’s largest single market, by users. Almost one in every two phone users in India uses WhatsApp. Together with its parent, Facebook, the firm is the leading messaging platform across most of the globe (with China being the most notable gap in the empire). 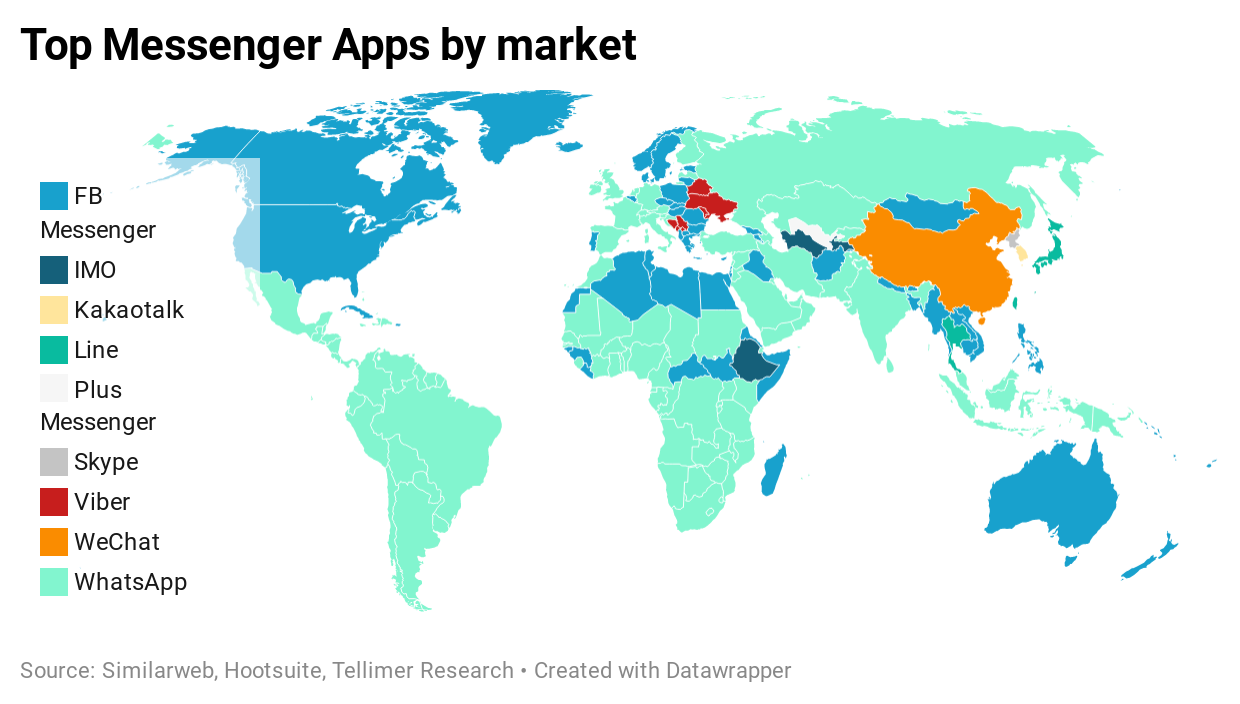 WhatsApp payments has faced a long and arduous journey in India

Facebook CEO Mark Zuckerberg has made no secret of the potential he sees for his business in India. The firm disclosed plans to launch a payments service in India as early as 2017. In February 2018, WhatsApp began testing its peer-to-peer payments service with 1 million users.

However, the firm has faced numerous delays from regulators worried about its market power, and lobbying from rivals with vested interests and consumer protection groups. After localising ‘five data elements’ the firm finally received permission to operate from the National Payments Corporation of India (NPCI) on Friday.

Launched in 2016, UPI is a payments infrastructure that has been built by a coalition of large Indian banks. It is currently the most popular payments platform in India, after receiving a significant boost when the government demonetised INR500 and INR1,000 notes in November 2016. WhatsApp itself has said that it is working with five leading institutions: Axis Bank; ICICI Bank, HDFC Bank, Jio Payments Bank, State Bank of India.

Since its launch, transaction activity on UPI has steadily increased, exceeding US$50bn in October 2020. 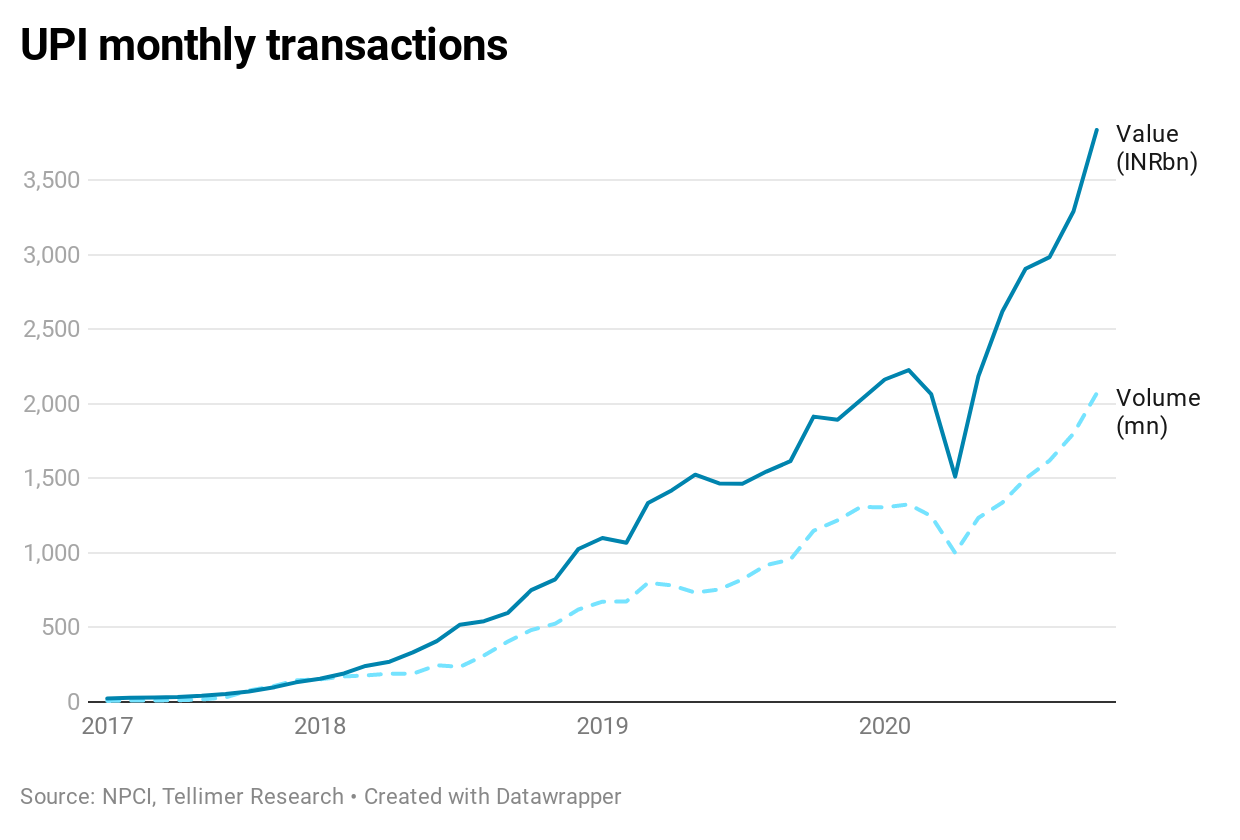 In contrast to operator-owned digital wallets, UPI-based transactions are free of charge. For payments providers like WhatsApp, this means that they will need to seek other ways to generate revenue. Based on WhatsApp’s plans in Brazil, we think the firm will try to levy charges on merchants that use the WhatsApp platform.

Note that the Brazilian regulator’s U-turn on WhatsApp was partly driven by its desire to develop a digital payments system that is open and cheap – WhatsApp had indicated that it wanted to charge businesses a transaction fee of around 4%. This experience suggests regulators will step in where they judge transactions fees to be excessive.

India has around 60mn small and micro businesses; over 15mn of these already use the WhatsApp Business app to catalogue products and reach out to customers. If WhatsApp could also act as the transaction interface for these businesses then it could help them increase their sales by providing a very convenient transaction interface to their customers.

Facebook has already indicated that it wishes to work with Reliance Jio (which the firm invested US$5.7bn in earlier this year for a 9.9% stake) to digitise these small enterprises. This could open up additional revenue-generating sources, such as advertising and customer servicing tools. Jio Platforms has an estimated user base of over 380mn, with an e-commerce arm, Jio Mart, that is available in over 200 cities across the country. Jio Mart differs from many of its rivals in that it does not intend to build up its own logistics infrastructure, but will instead act merely as a conduit between consumers and neighbourhood mom-and-pop stores (‘kiranas’). Techradar estimates India’s e-grocery market at US$875mn today, rising to US$14.6bn by 2023.

Firms are struggling to make money from digital payments

The challenging environment is vividly illustrated by Paytm, owned by One97 Communications Limited and one of the leading digital payments franchises in India with high-profile shareholders such as Softbank, Ant Group and Alibaba. This is a firm that has raised more than US$3bn to date, can charge transaction fees on its digital wallet transactions and has an established 17mn merchant network. In October 2020, 70% of its payment transactions were person-to-merchant, which are easier to monetise than person-to-person transactions.

Despite these favourable characteristics, and even after generating US$490mn of revenue in the year to March 2020, the firm still posted a loss of US$350mn for the period (albeit down from a US$550mn loss in the prior year, on high marketing expenses and payment gateway fees). In the six months to June 2020, the firm made a loss of cUS$195mn from revenues of US$180mn. One97 Communications intends to move into profit in 2022, but clearly this will require a sharp turnaround in performance.

Adding to the challenges that Whatsapp payments is likely to face in India, the regulator has placed several significant restrictions on the business.

Initially, WhatsApp has permission to roll out its UPI-based payments service to 20mn users (ie less than 5% of its customer base). We would not be surprised if this limit has already been reached (the firm has said it will use a ‘first-come-first-served’ approach). Additional growth will be possible in a ‘graded manner’, according to the NPCI.

Another critical restriction is the requirement that single operators can only command 30% of the volume transacted through UPI. Given WhatsApp’s large existing customer base, and the payment industry’s strong network effects, we think the 30% market share cap could prove to be a severe handicap to the growth and profitability of the business. For WhatsApp (and others) the 30% restriction will take effect from January 2021, but industry leaders GooglePay and PhonePe have been given an additional two years to comply to limit disruption to the market.

One important drawback of UPI, which may reflect its origins as a bank-driven network, is that all users must have both a bank account and debit card. Only 80% of India’s adult population have a bank account. While there are c860mn issued debit cards, the number of cardholders is likely to be significantly less (some people will hold multiple cards).

Another key restriction is that users are limited to 10 transactions per day, with an aggregate daily value cap of INR1lakh (cUS$1.4k). Accordingly, the UPI interface will likely only be suitable for individuals, not businesses.

Given the challenges highlighted above, we think it is worth stepping back and assessing what will differentiate the winners and losers in the coming battle for dominance of the Indian digital payments space.

Our survey of 29 payments-focused fintechs across seven emerging markets highlighted several drivers of success: first-mover advantage, funding access and operational efficiency. Although WhatsApp is a payments latecomer to India, its parent Facebook will be able to readily finance its growth, while its large existing customer base should lower customer acquisition costs, thereby boosting operating margins. With Facebook’s payments operations already well established in developed markets, there is scope for a transfer of management expertise, although we suspect many of the challenges faced in India will be unique to that market. 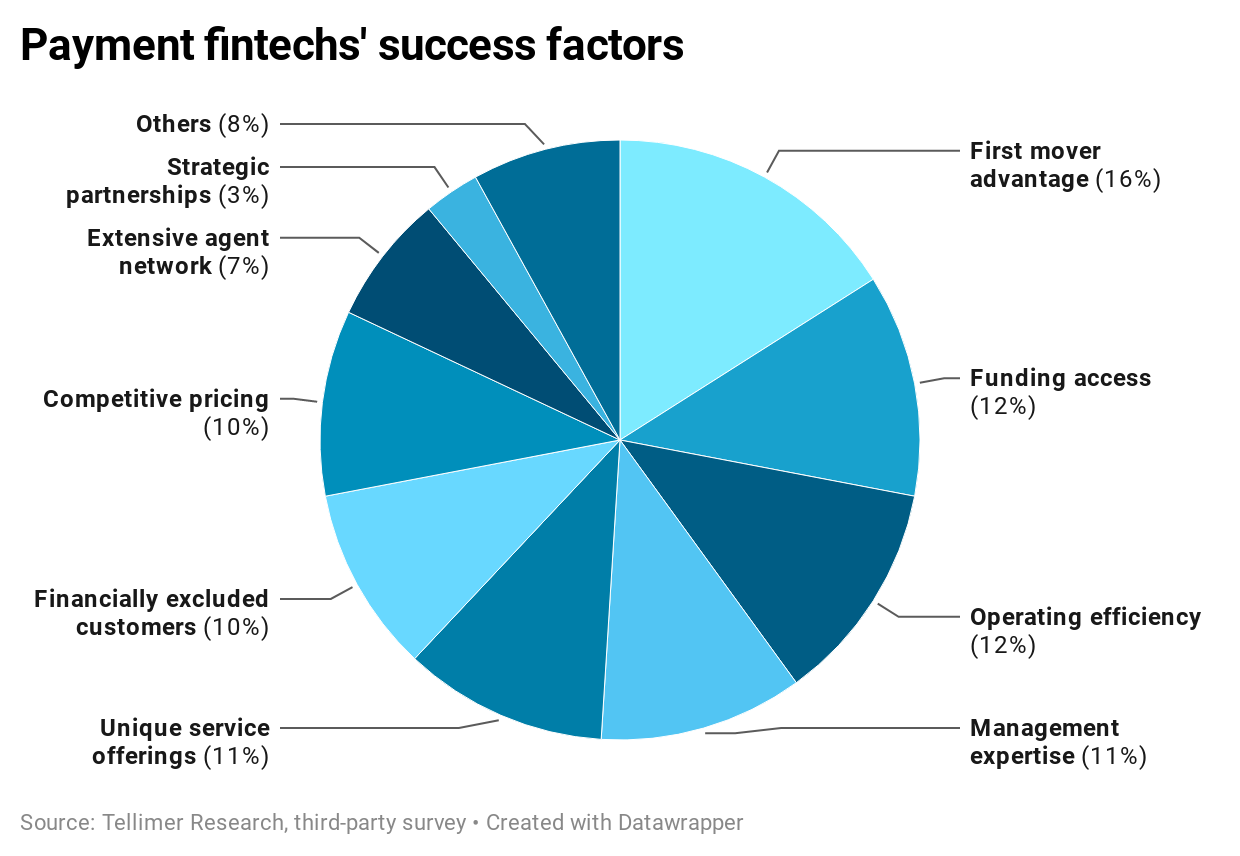 What payments fintechs are working on to develop their businesses

Our survey also highlights three key strategic objectives for EM payments-focused fintechs: technology investment, geographical expansion and product introductions. We think WhatsApp has similar objectives, with plans to launch in several other markets (such as Brazil and  Indonesia), and a goal of facilitating online commerce for small offline businesses. Its initial experiences in India are therefore likely to significantly shape its global payments and e-commerce agenda. 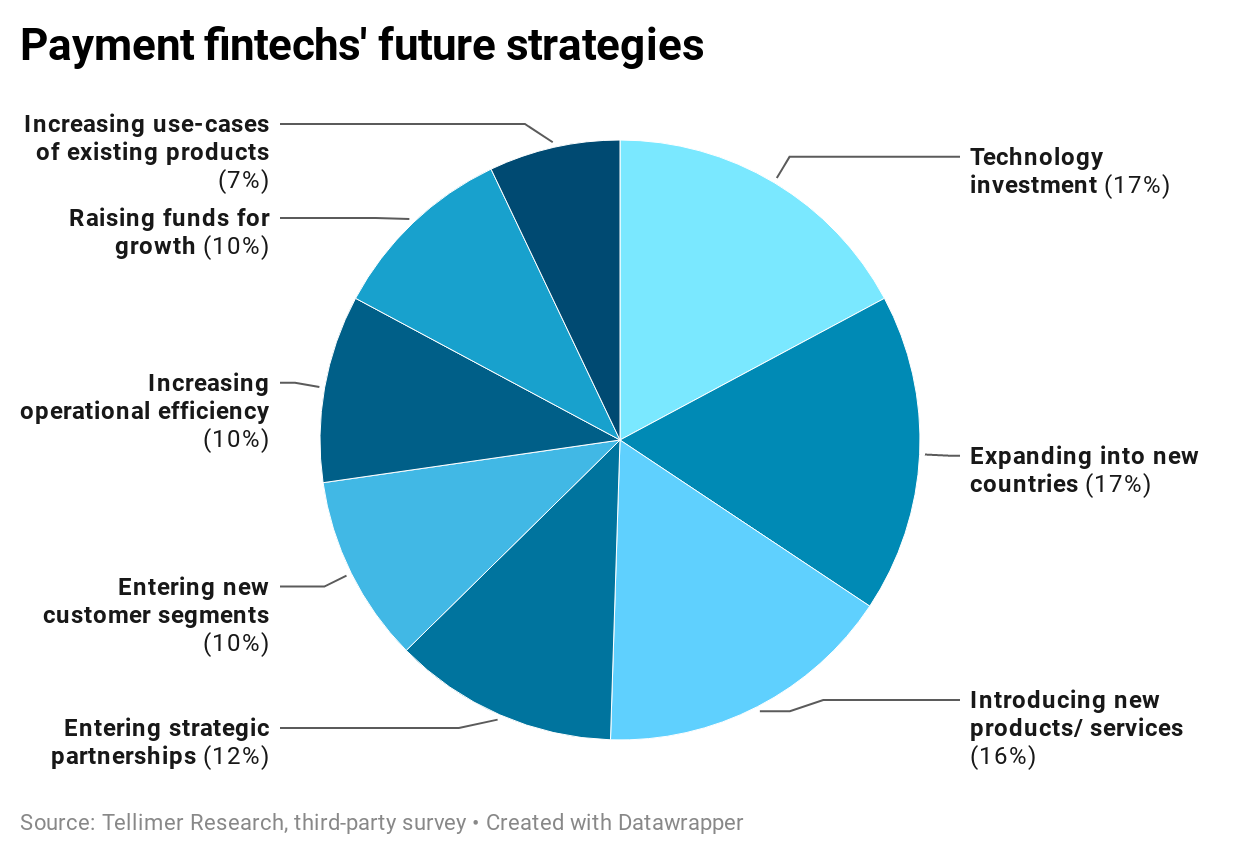 Our survey of 100 Indian consumers indicated that around two-thirds of them are conducting more mobile payments as a result of the Covid-19 pandemic. More generally, our survey indicates that consumers expect to shift their overall consumption of financial services (encompassing payments, banking, insurance and investment) towards fintechs and away from both traditional and informal providers. The scale of the shift on a 3-year view is estimated by our surveyed individuals at 5 percentage points. 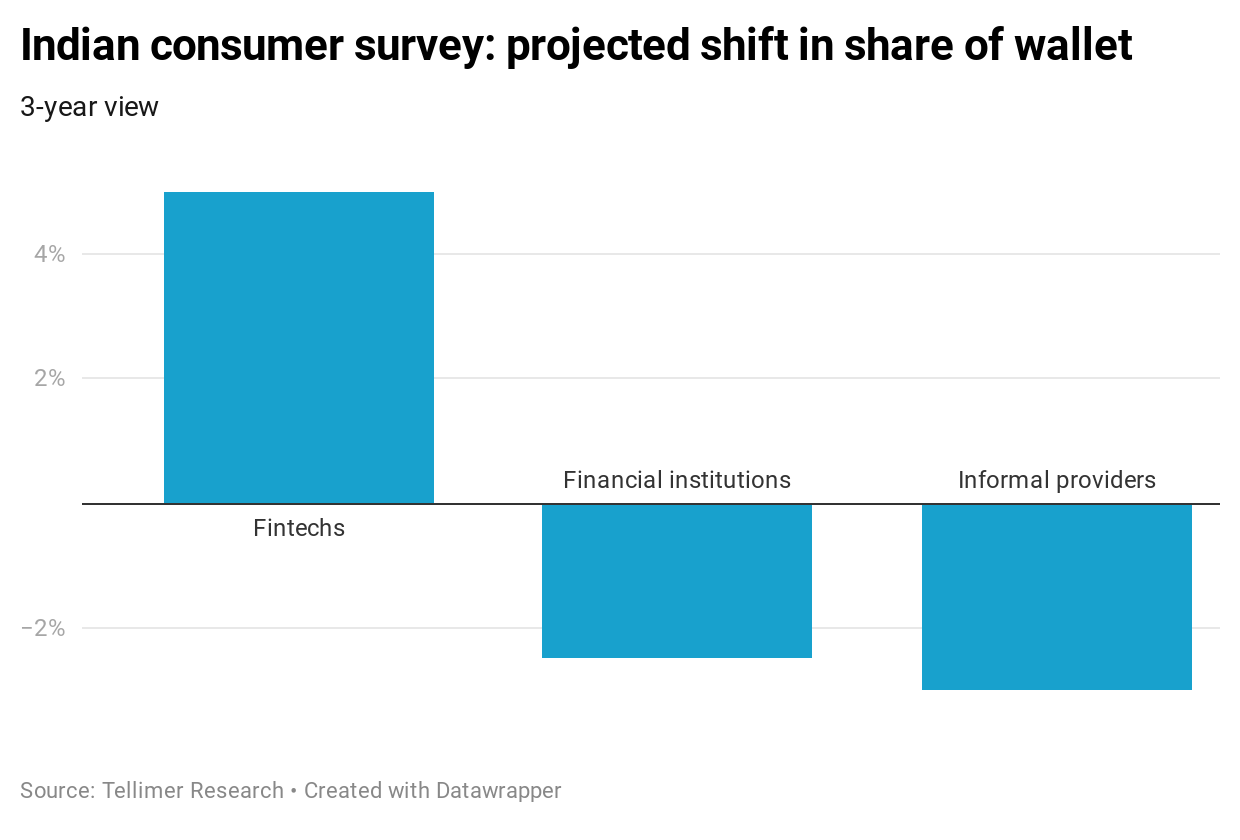