The IMF Managing Director Kristalina Georgieva said last week that agreement with the Ghanaian authorities on a new programme – reportedly amounting to US$3bn (which would make it large, at c300% of quota) – should be finalised by the end of this year. The comments, made on the sidelines of the Africa Adaptation summit in Rotterdam on 5 September, come after Ghana's surprise announcement on 1 July to seek an IMF programme.

Georgieva's timeline seems optimistic to us given it's not clear how much progress has been made so far. We know the IMF has held initial discussions with the authorities, during the staff visit on 6-13 July, and no doubt technical discussions have continued virtually. But there has been a change of mission chief since then and it would seem that much still needs to be done (although the authorities say their document is ready to be submitted to the Fund). The Fund's new mission chief held introductory talks last week with a full mission planned for later this month. But we are still no clearer on what an IMF programme, based on the government's enhanced domestic program, will look like and whether it will require debt restructuring.

But while the timeline sounds optimistic, with the end of the year now less than four months away, it might be feasible in our view if the programme does not contain debt restructuring, which would be positive for the bonds. Or put another way, we think the only way it will be possible to reach an agreement this year is if it doesn't involve debt restructuring. Is this what Georgieva is signalling (knowingly or not)? Although, even then, it may still require an unpalatable degree of fiscal restraint and the programme's design could still take time.

On the other hand, if the programme does require restructuring because of debt sustainability concerns, which would presumably have to take place under the umbrella of the Common Framework, we could expect it to take much longer – look how long it's taken Zambia. Agreement on a new programme that involves restructuring would still require official sector financing assurances before Board approval, and that could take time, even if the Fund is content to leave private sector involvement (PSI) until later, on the basis of good-faith negotiations. That said, compared with Zambia and Sri Lanka, the share of official bilateral debt in Ghana is much lower (less than 5% of public external debt), according to Ministry of Finance data, which might help quicken the process. However, conversely, because bonded debt is so significant (dollar bonds account for 46% of public external debt), and therefore crucial for delivering debt sustainability, PSI might be too important not to have as a prior action for programme approval rather than leave it until subsequent reviews. And restructuring the bonds will take time, too.

In another twist, the IMF managing director also commented that Ghana's crisis is due to exogenous shocks (Covid and the war in Ukraine) and not bad policies. While we understand the politics of the IMF's relations with its members, we think this diagnosis risks damaging the IMF's credibility and seems contrary to the tone of the IMF's 2021 Article IV. It seems to miss the point that Ghana lost access to the market a year ago, well before the war in Ukraine, while the Covid excuse is the same for everyone, and not everyone has fallen into crisis, like Ghana. Rather, in Ghana’s case, government policies have played a part (a view seemingly shared, unsurprisingly, by former president John Mahama – see here).

Instead, we think the crisis reflects the government's excessive fiscal response and planned slow pace of fiscal consolidation, as we noted back in October 2020, which damaged its policy credibility, at a time of pre-existing concerns about debt sustainability, which it could ill afford given its reliance on market access. And, while few predicted the subsequent hike in US rates, Ghana was long seen as one of the countries most at risk of a tightening in financing conditions (yet, perversely, as a commodity exporter (oil, gold, cocoa), Ghana should also be benefiting from the boost to its terms of trade). To absolve the government in this is, we think, misleading.

That said, ascribing the crisis to exogenous events could be taken as bondholder positive if they are seen as a justification for not bailing in the bonds (bondholders may argue, "why should we pay?", although others may argue the opposite). The IMF wants to support Ghana and default would exacerbate the crisis. However, this might send the wrong signal to others and could soften the programme design. Moreover, we suspect much will still depend on the DSA.

However, any inference that Ghana could avoid restructuring might be at odds with recent comments from the government, with the deputy finance minister stating at the end of last week that the government "has started taking steps to restructure the country’s debt stock". However, the comment is broad and ambiguous and could be read in a number of ways.

Ghana's dollar bonds continued to drift lower since the government’s surprise announcement on 1 July to seek an IMF programme, after the initial spike in prices, with the '32s falling below US$40 at the end of August, amid ongoing fiscal concerns (unpaid electricity debts being reported last month and a cancelled domestic auction), rating downgrades (S&P and Fitch both downgraded Ghana in August) and a collapsing currency (although it recovered recovering last week). This was possibly due to technicals, with the bonds looking so oversold at those levels, but likely also helped by Georgieva's timeline for reaching programme agreement by the end of this year, which the market has taken positively (for whatever reason). The bonds have since risen 5pts from their low.

However, while the IMF managing director's comments about the timeline and nature of Ghana's crisis could be seen as positive for the bonds, we still cannot rule out restructuring.

We maintain our Buy on GHANA '32s at a price of US$43.5 (yield 23.9%) as of cob 9 September on Bloomberg (mid-price basis). The bonds are admittedly lower than at the time of our last affirmation, Ghana inflates fiscal deficit away on 26 July (US$46.4), and the time of our upgrade, Ghana: Bond collapse opens value opportunity amid risks on 9 June (US$51.6), but we think prices are still well below expected recovery values in plausible restructuring scenarios. 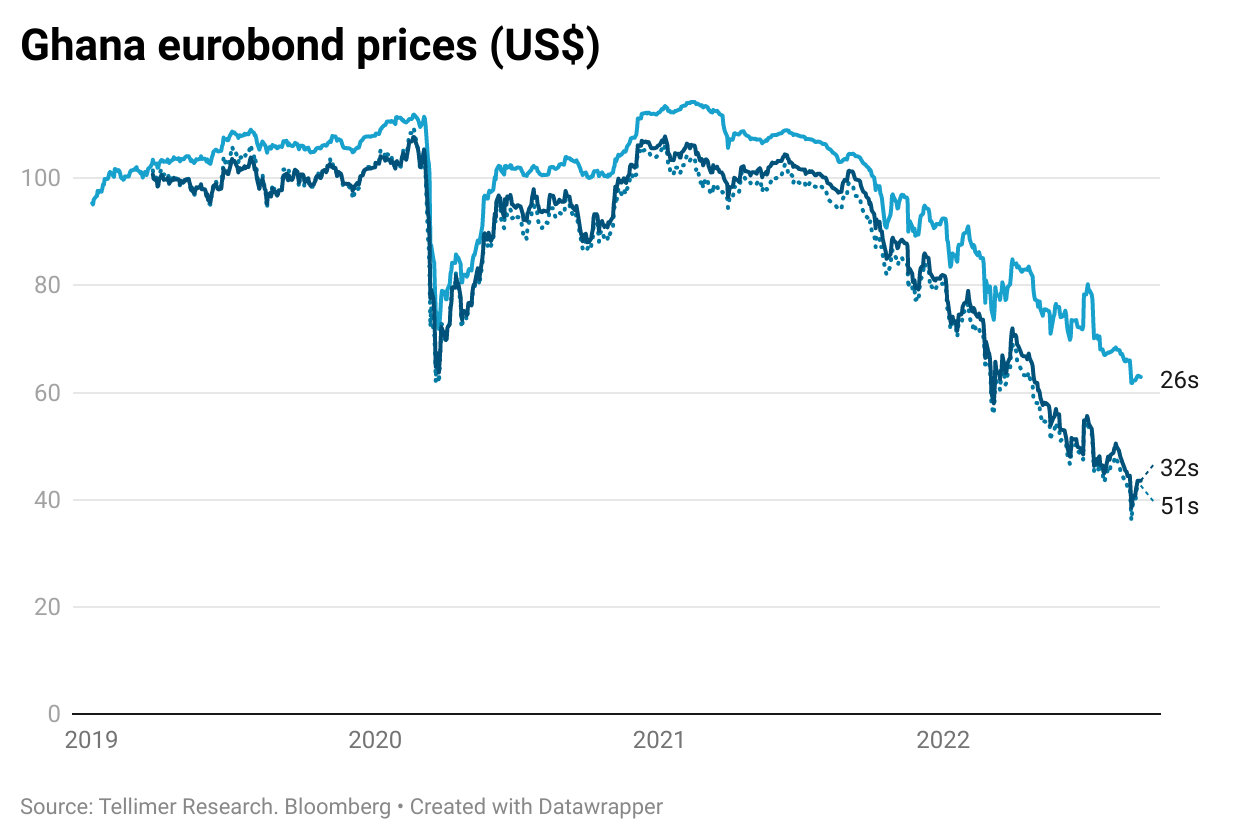