What the banking sector tells us about global investor expectations

We take a look at the world’s 100 most highly valued banks (with a combined market cap of US$5.6tn) to gauge how investors in these names see the outlook for the global economy.

Commodity-heavy economies are over-represented in our list, with banks in Canada, Australia, Brazil and the Middle East punching above their weight. In contrast, European banks have only a limited presence amongst the industry titans. Despite significant price weakness this year, US banks remain the most valuable contingent, with China banks a close second.

In contrast to previous major market downturns (when banks have tended to underperform well before the market correction takes effect), the global banking sector has slightly outperformed the overall market since the beginning of last year.

Valuations provide another measure of where investors see the risks and opportunities in the banking sector. Large banks in the oil-driven GCC economies are trading at significant premiums to their global peers, and to their own historical valuations. Meanwhile, the biggest banks in major commodity importing nations (such as China, Germany, South Korea and Japan) are trading at sizeable discounts to their historical trading ranges.

The data suggest investors in the sector remain sanguine about the global growth outlook, with the commodities super-cycle continuing and only localised pockets of asset quality stress. We see two risks to this view. Commodity prices could be an early casualty of demand destruction prompted by monetary tightening; we are already seeing signs of this in key bellwether assets such as aluminium and copper. And higher interest rates could also prompt a broad-based deterioration in loan quality. Bank shares would be expected to underperform heading into this scenario, with asset quality issues putting greater pressure on earnings than for most other sectors.

On this basis, the 17% decline in global stock markets we have seen so far this year may not yet sufficiently discount the rocky road ahead.

Asian banks have the largest presence on our top banks list

Asia-Pacific accounts for 40 of the world’s 100 most valuable listed banks, followed by the Americas (26), Europe (22) and Middle East-Africa (12). By market cap, the leadership of the Asia-Pacific and Americas regions is even more pronounced. 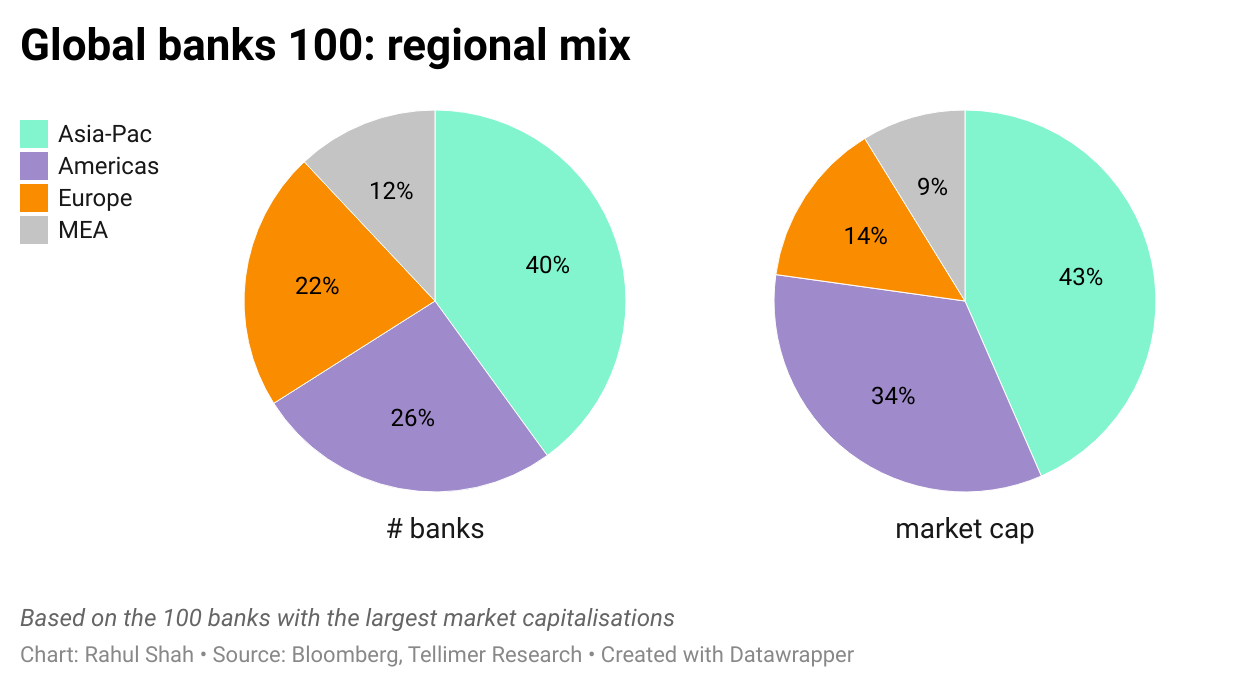 If we consider year-to-date performance, most of the outperforming sectors can be linked to commodity exports, while banks exposed to commodity-importing developed markets have suffered. Russia is the notable exception, with its investment case being hit by sanctions. 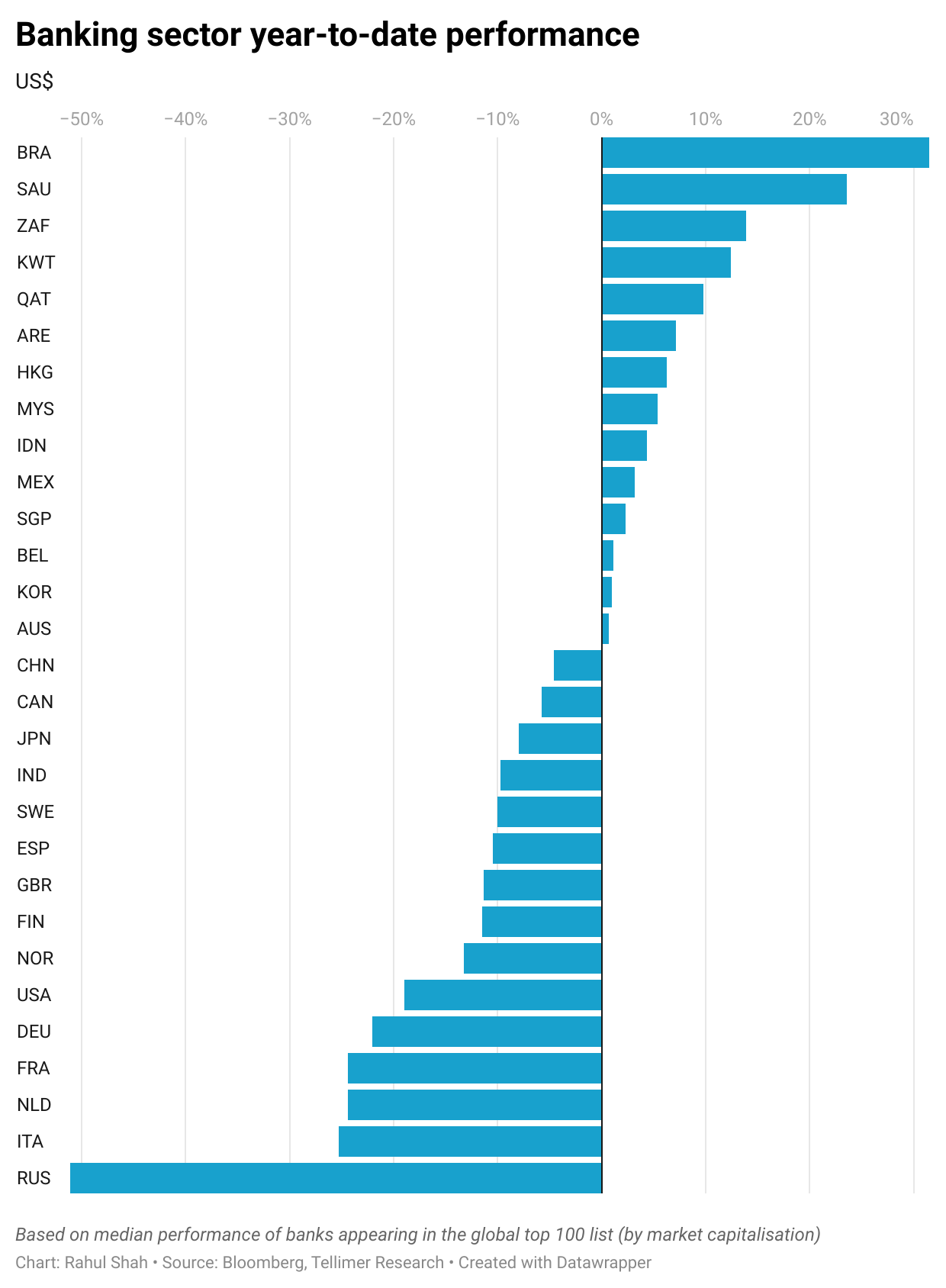 These broad trends have played out over a longer period, with banks in economies such as Australia, Brazil, Canada and Saudi Arabia now punching well above their economic weight within the top banks portfolio. In contrast, the weak economy and fragmented banking environment of Europe results in relatively few European names. Indeed, other than Asia-focused HSBC, no European bank makes it into the top 20 on our list. 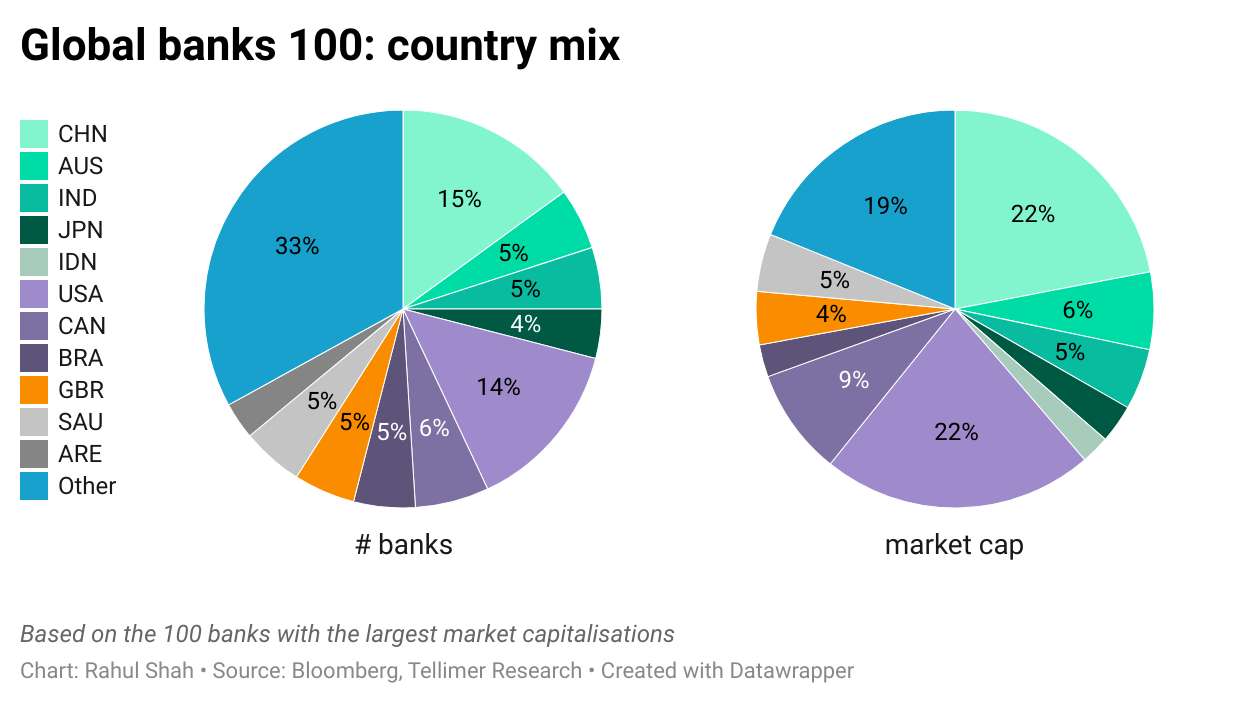 The global banking sector has slightly outperformed the overall equity market over the past couple of years. To us, this suggests that investors are not (yet) factoring in a high likelihood of a more pronounced market downturn. For example, in a recessionary scenario, bank earnings would be at risk of collapsing as asset quality deteriorates; capital erosion is also a possibility under these conditions. 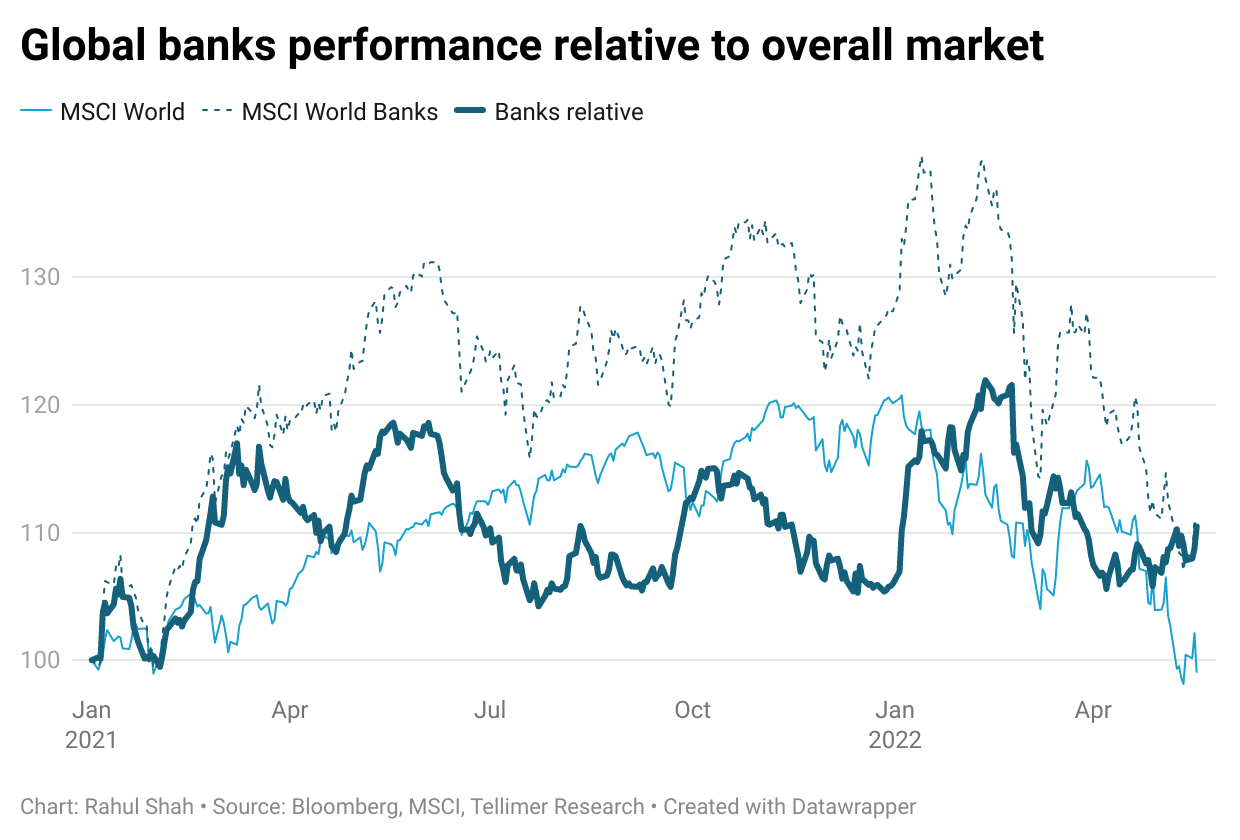 Historically, the banks sector has tended to underperform the broader equity market well ahead of large-scale market downturns. We saw this ahead of 2020 when investors were fretting about a macro slowdown even before the Covid-19 pandemic hit. Similarly, multi-year periods of banking sector underperformance were witnessed well ahead of the 2000-03 and 2008-09 bear markets. 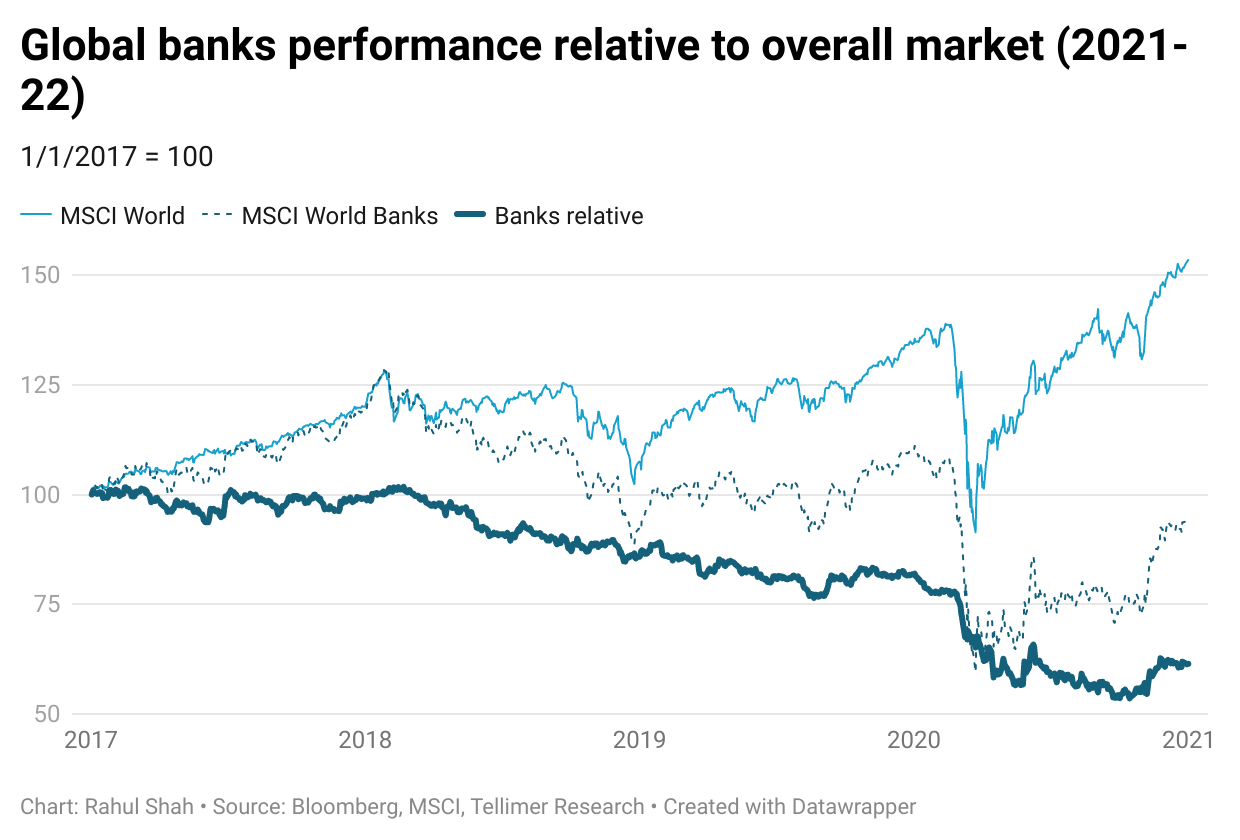 Of course, each market and economic cycle is different, and the pandemic and subsequent monetary/fiscal stimulus, and Russia’s invasion of Ukraine, have certainly muddied the waters. But current sector performance suggests bank equity investors are not factoring in a major correction along the lines of 2000, 2008 or 2020.

Looking at the PE and PB multiples at which these top banks are being priced, we see there is a sharp variation. Investors are willing to apply high multiples to banks in commodity-exporting markets (notably Kuwait, Saudi Arabia and Qatar). Banks in India and Indonesia also tend to be highly rated.

In contrast, banks in export powerhouses such as China, Germany, South Korea and Japan are trading at less than half book value; high input costs are unhelpful for the companies to which these banks lend. 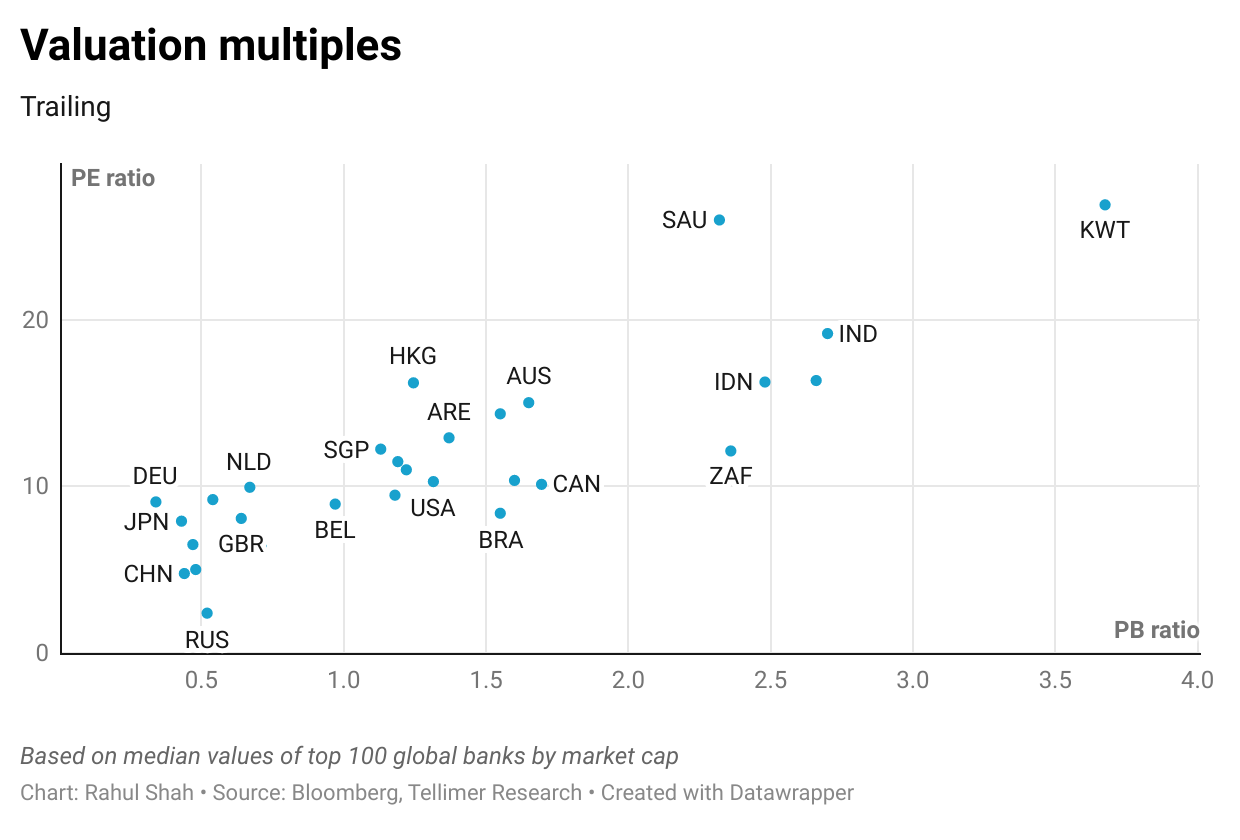 These points are reinforced if we consider current multiples versus historical norms for the large banks in our sample. Banks in the larger GCC economies are trading at significant premiums to historical trading ranges. Chinese banks are trading at sizeable discounts; they have been subject to a steady de-rating over the past few years as concerns regarding the growth and asset quality outlook have increasingly weighed on sentiment.

Russia is the main negative outlier, reflecting the heavy cost of sanctions on that economy, and the inability of many western investors to now own Russian assets. 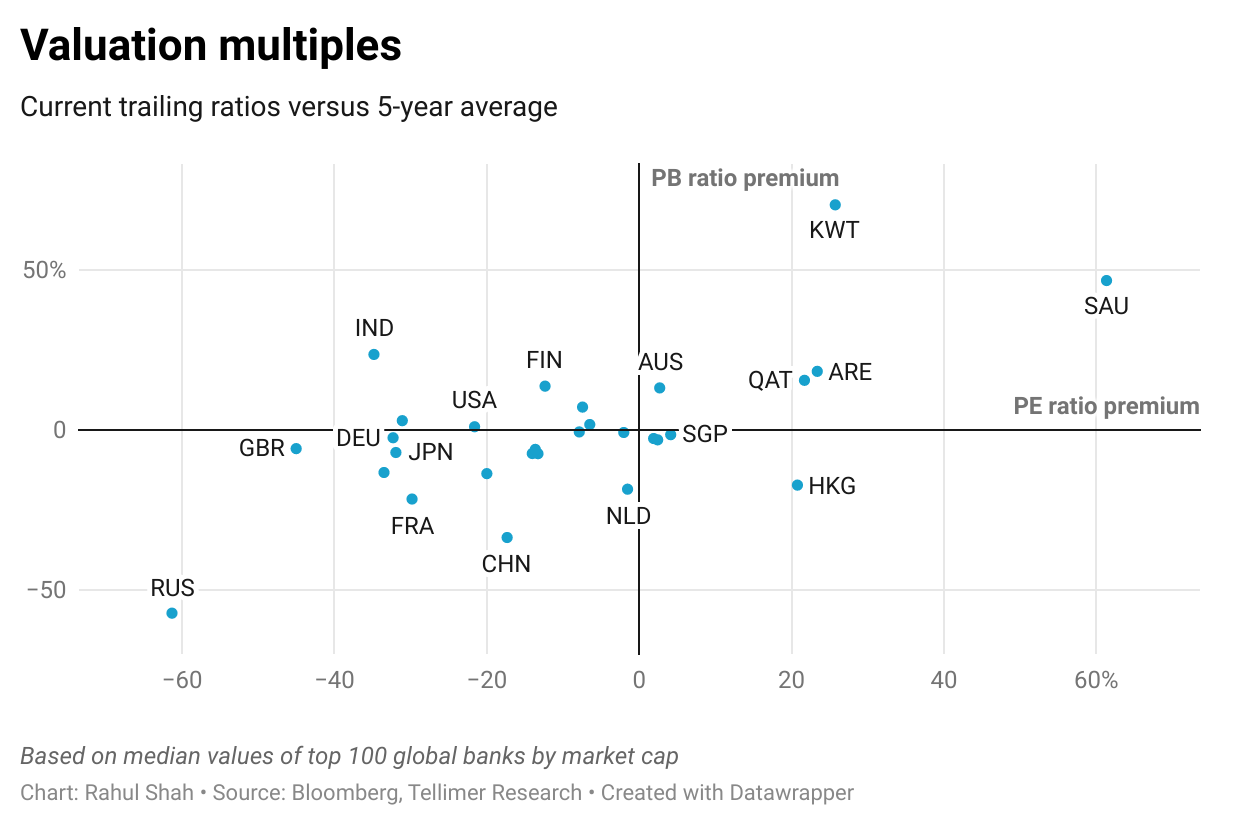