What rising US rates mean for EM assets

Inflation has continued to heat up globally, laying waste to any arguments that it might be a "transitory" phenomenon (although it is too soon to tell whether higher headline inflation has fed into a more sustained increase in core inflation or wages). US inflation reached a 40yr high of 7.9% yoy in February, which has pushed up Treasury yields sharply over the past month. The 10yr UST yield has now risen from just over 1.5% at the end of 2021 to 2.55% as of cob on 5 April, with c75% of the increase coming from higher real rates and c25% coming from rising inflation expectations. 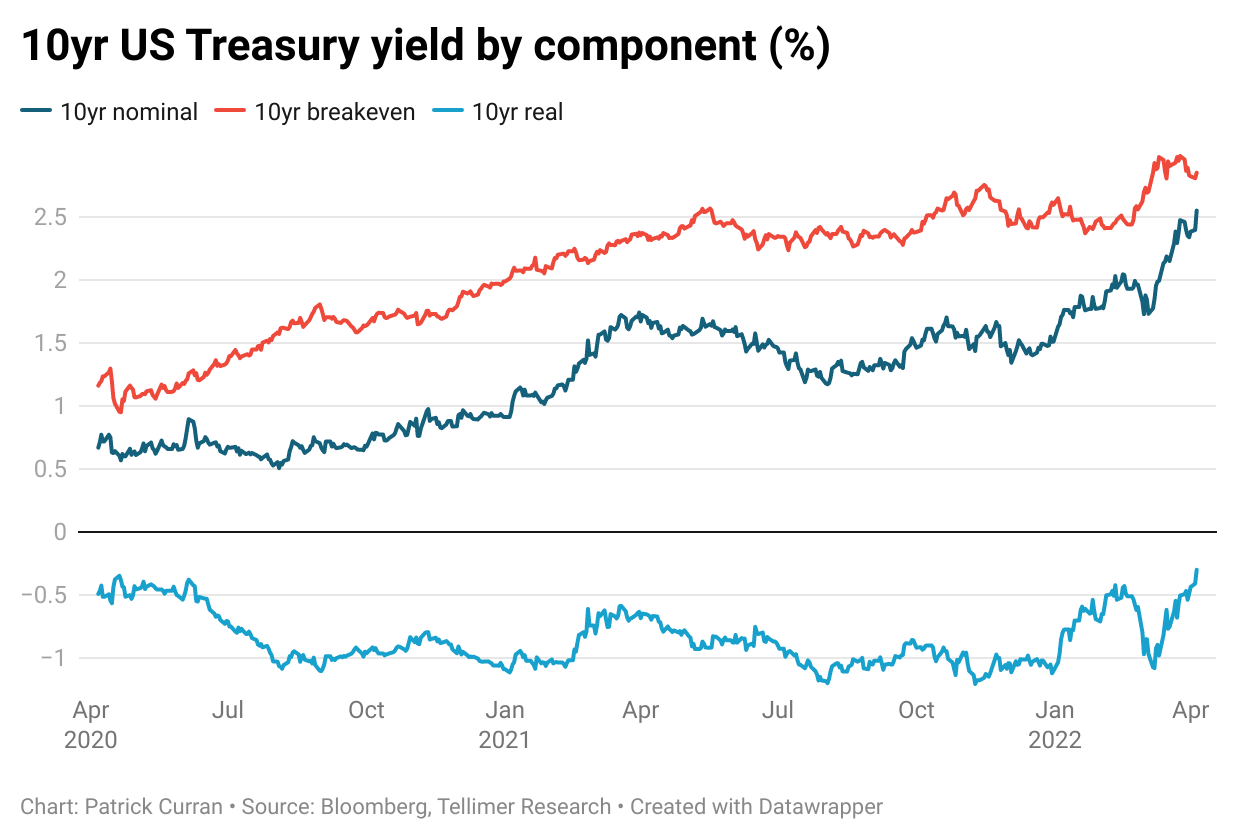 This suggests that, despite inflation that is alarmingly high and sticky, inflation expectations have not yet become unanchored. This is borne out by market-based indicators of inflation expectations, with the 5yr breakeven rising sharply and pricing elevated inflation in the coming years, while the 5y5y breakeven has remained relatively stable in the 2-2.5% range over the past year. Survey-based indicators tell a similar story, with the University of Michigan’s 1yr expectations rising sharply to 5.4% in March while 5-10yr expectations are at a more subdued 3% (levels last reached a decade ago, but still relatively benign). 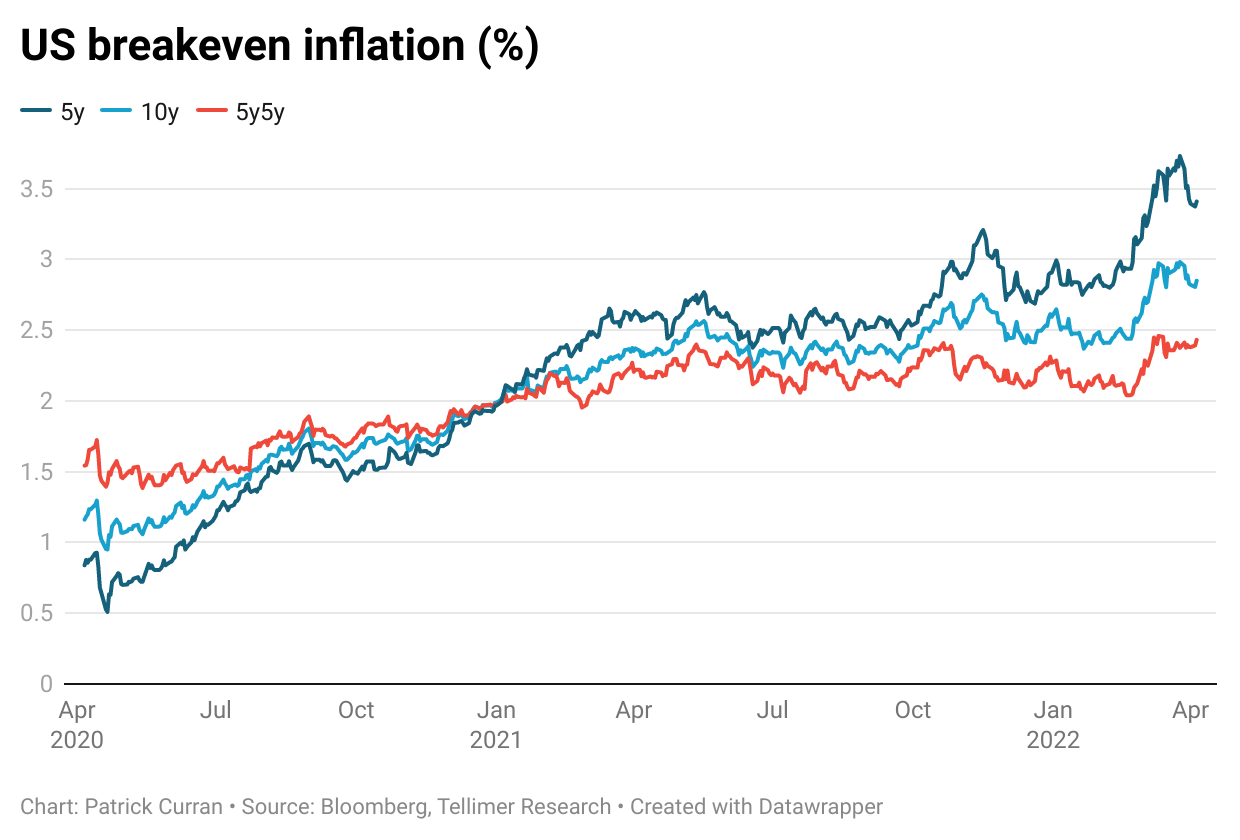 The rate increase has been driven by expectations of tighter monetary policy from the Fed, with increases to the 2yr yield far outstripping the 10yr. This caused the yield curve to invert earlier this week, an indicator that has reliably preceded every recession since 1980 by an average of c1.5yrs. This has prompted concerned commentary that the US could be in for a recession, likely induced by the Fed being forced to tighten aggressively to prevent the economy from overheating and to tame sticky inflation. However, the Fed tried to downplay this relationship in a note last month, saying that it is "probably spurious" and citing the "near-term forward spread" as a more reliable indicator. 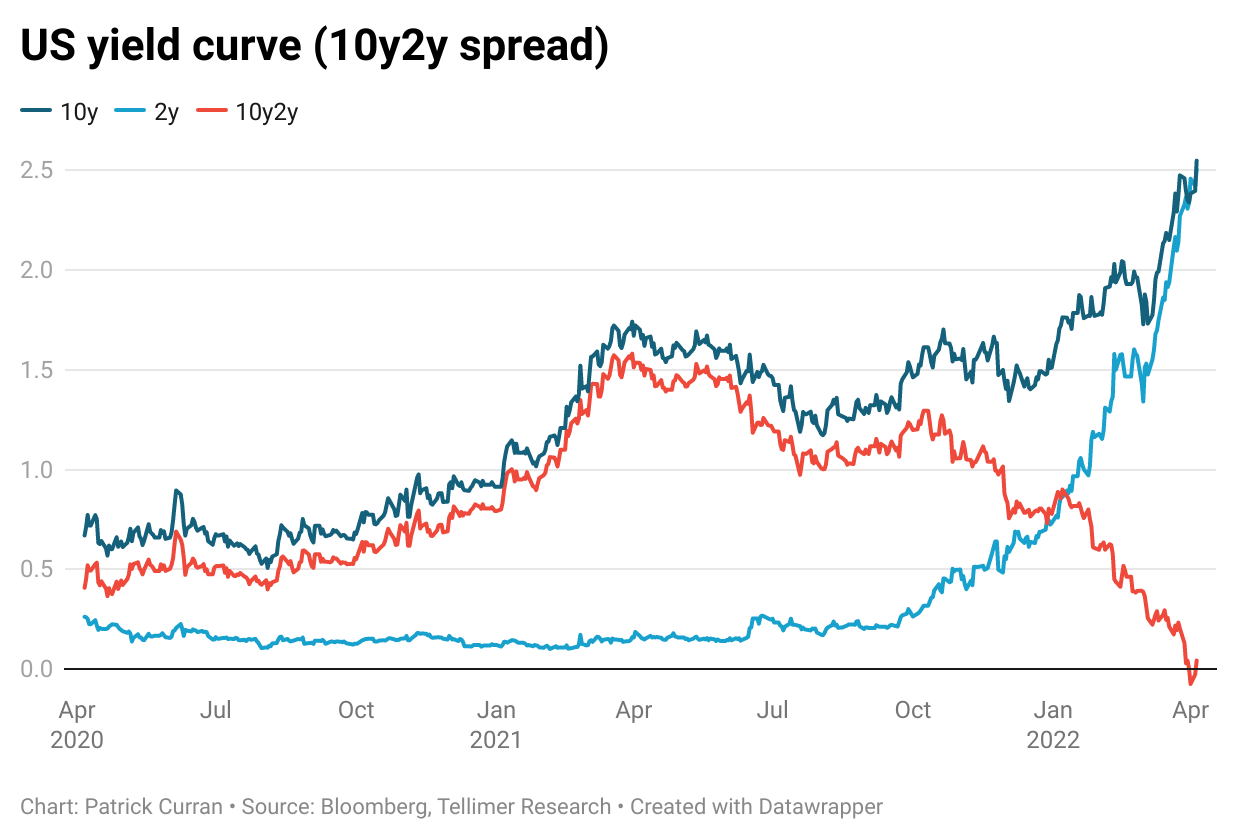 The Fed argues that a flattening of the 10y2y spread could reflect a number of things, including expectations for looser monetary policy and/or lower growth in the years ahead (the recessionary interpretation) or expectations that high inflation will moderate over the longer term (a more benign interpretation). Conversely, a negative near-term forward spread (defined as the 18M3M USD forward rate minus the current 3M T-bill rate) directly reflects market expectations that Fed policy will be looser 18 months from now (eg due to the need to cut rates to combat a recession), and this indicator has trended in the opposite direction of late (reaching a historically steep level). 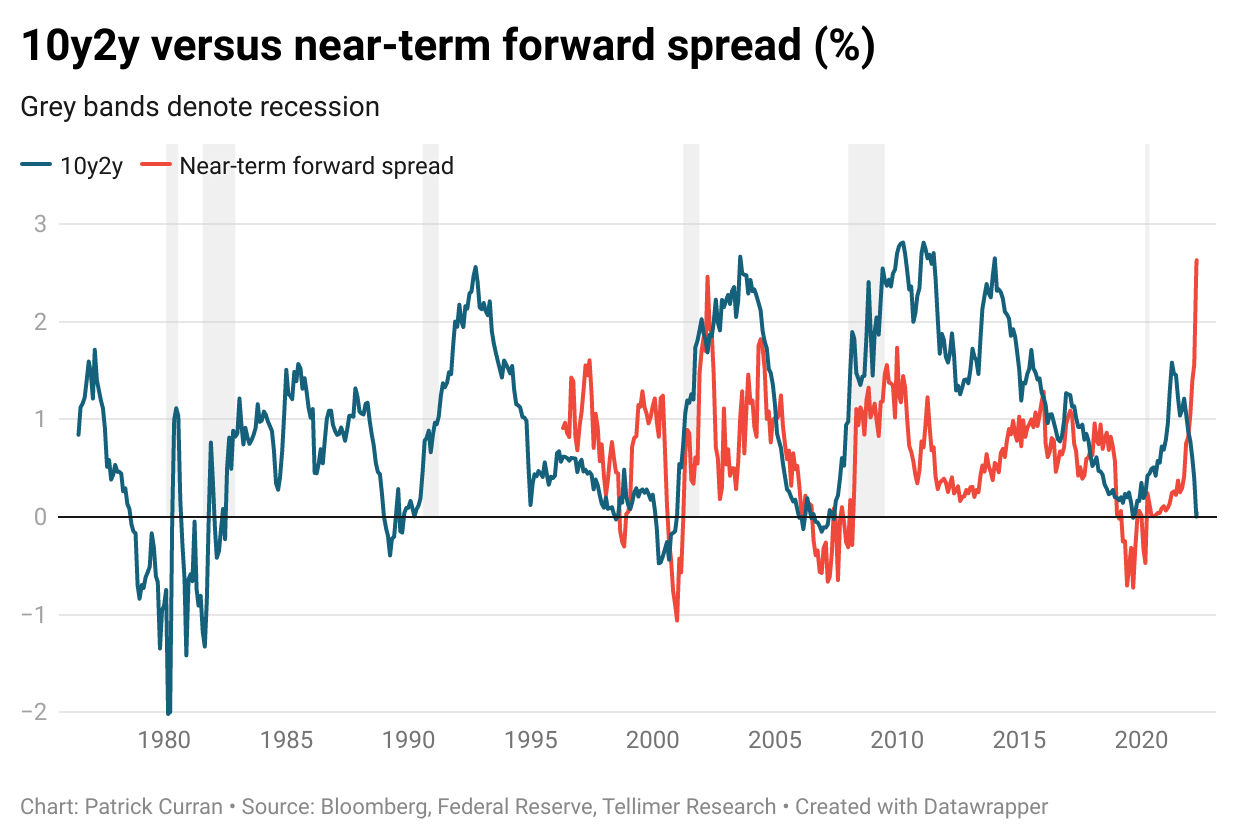 Markets are now pricing in nearly 9 hikes of 25bps by the Fed before the end of the year, up from less than 3 at the beginning of the year, with the policy rate now expected to reach 3% by this time next year. This includes expectations for a c50bps hike at each of the next two meetings and c25bps at the remaining four, a notably hawkish shift versus a year ago when many market participants (and the Fed itself) still saw inflation as being a transitory phenomenon. Notably, this would also be the first time since 2000 that the Fed has hiked in increments greater than 25bps, and would equate to a hiking cycle roughly the same size but in nearly half the time compared to the previous six Fed hiking cycles. 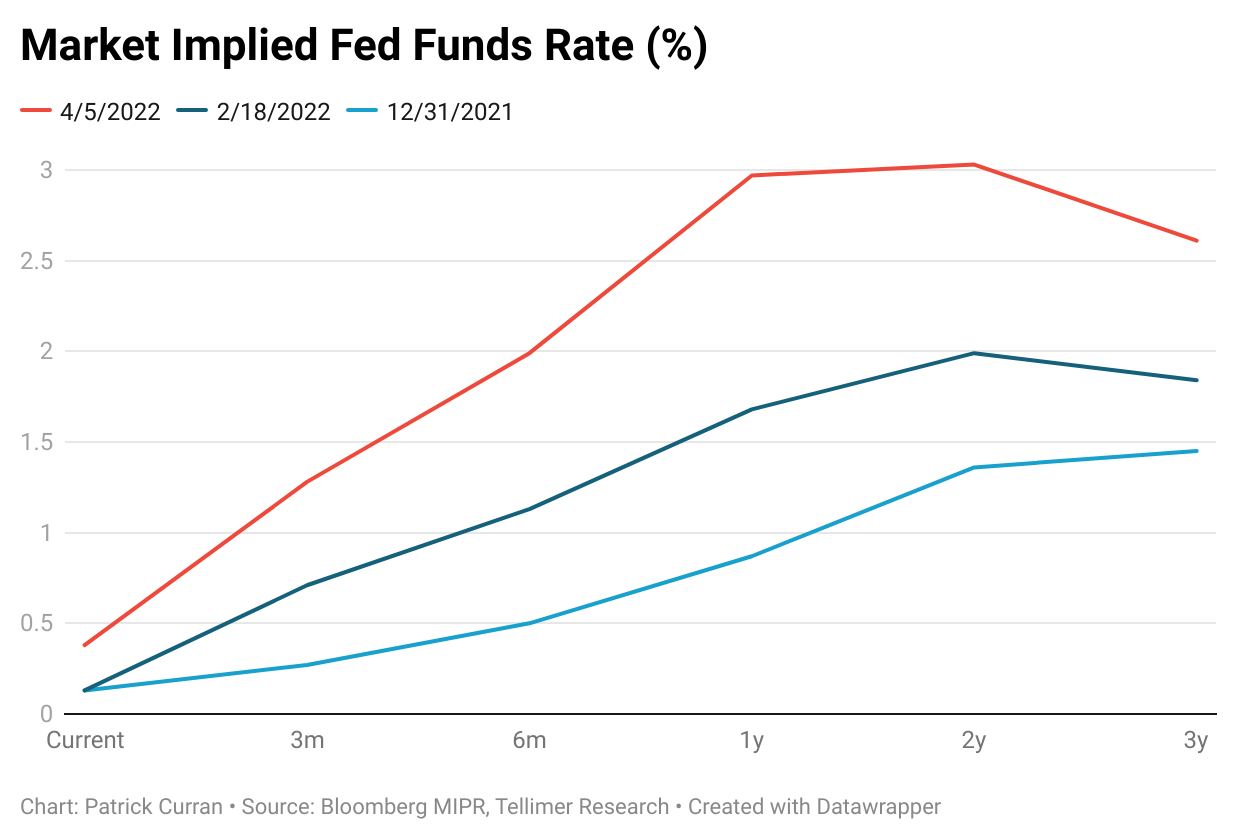 EM assets seem to have digested this hawkish shift quite well, which follows the historical trend of EM assets outperforming during Fed hiking cycles. The JP Morgan EM Currency Index is now up 1.3% ytd while the MSCI EM Currency Index (which measures total return) is up 0.7%. Local currency debt has been supported by proactive tightening at many EM central banks (with 180bps of hikes on average across 66 emerging and frontier markets over the past year), which has continued to push up the real interest rate differential between EM and DM countries. 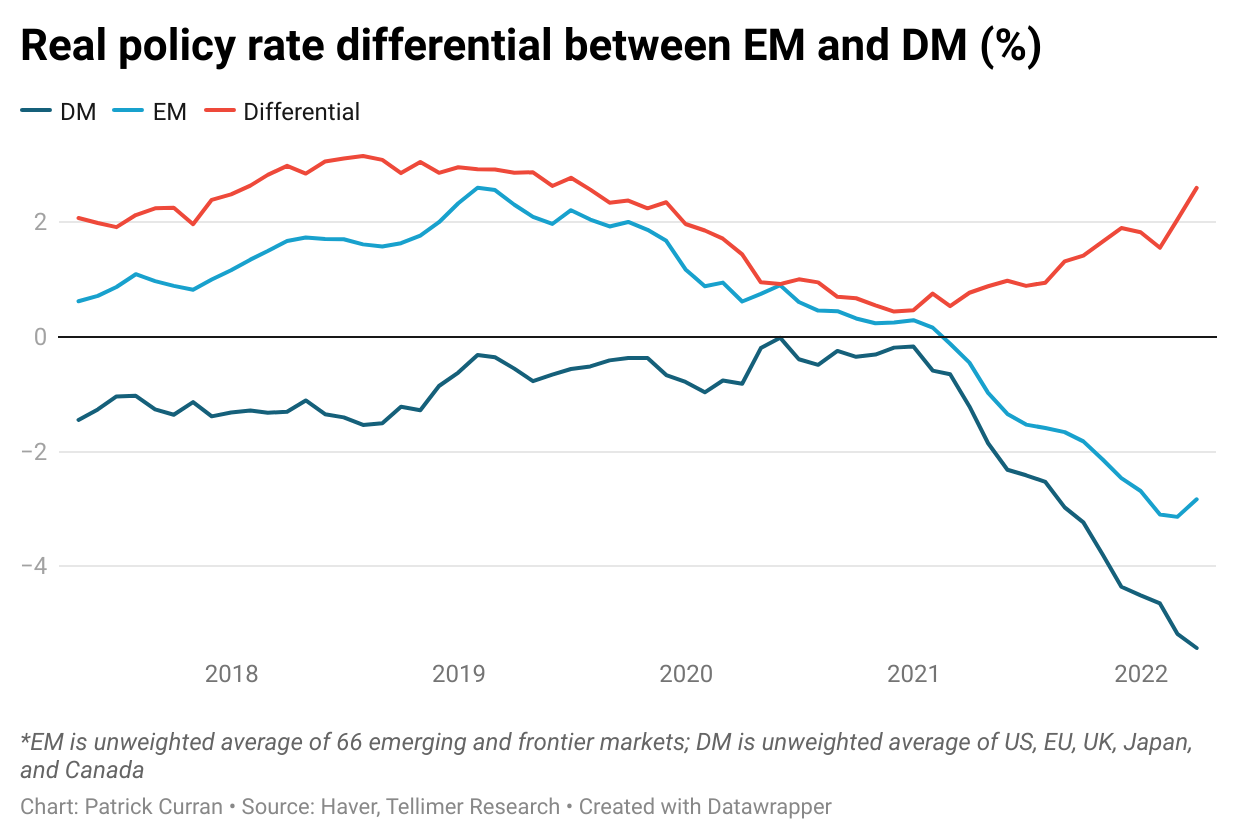 And while hard currency debt is still down ytd, with the JP Morgan EMBI falling by 9.25% as of 4 April in total return terms, this has largely been driven by rising US yields. The spread has widened by just 11bps ytd. Even more remarkably, spreads have now fully recovered from the sell-off that proceeded Russia's invasion of Ukraine, with the EMBI spread falling below pre-war levels after the exclusion of Russia from the index on 31 March and falling further to 341bps on 4 April. This is a remarkable recovery compared to just a month ago, when the EMBI spread had risen to 451bps (or 389bps, excluding Russia). 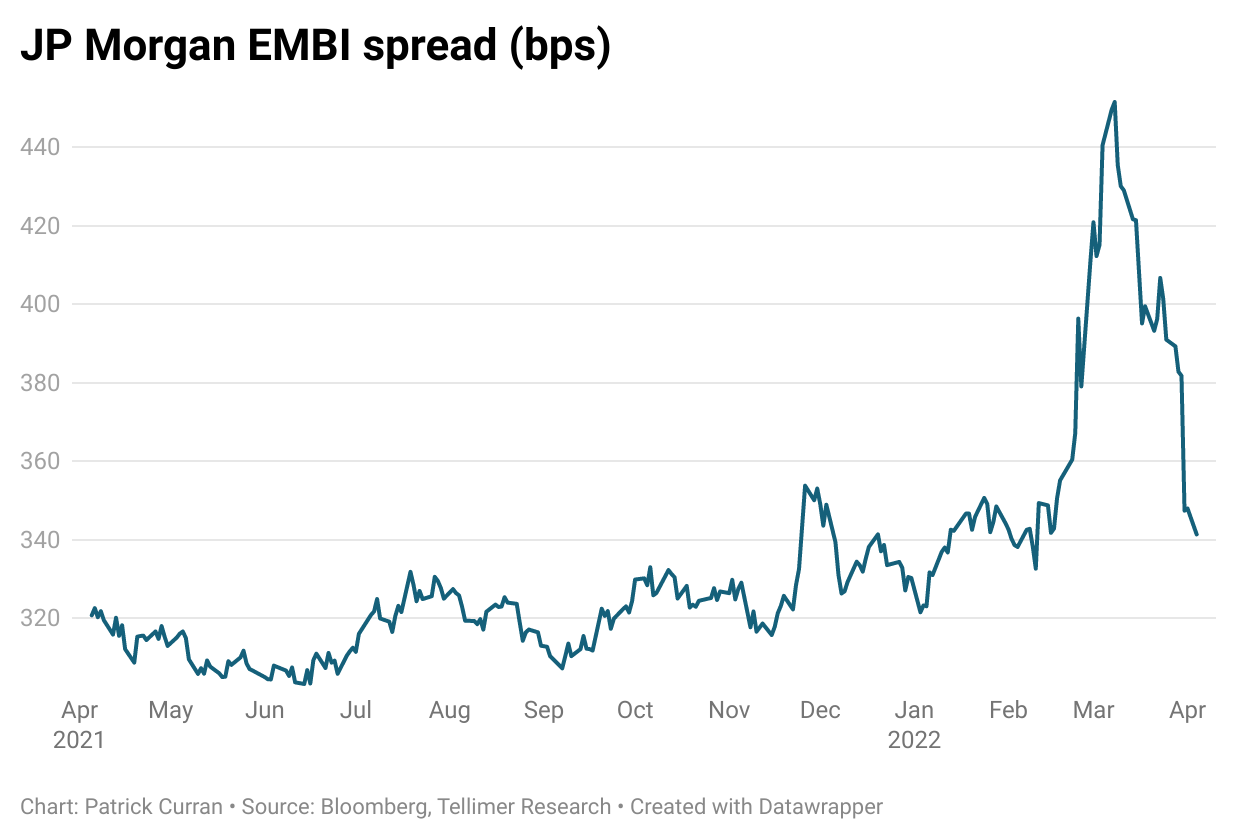 However, there is a big dispersion across countries, with commodity importers and higher-yielding countries with pre-existing imbalances selling off sharply since the invasion, along with countries closer to the war or that have greater economic dependence on Russia. The hardest hit besides Ukraine (and of course, Russia and Belarus), whose EMBI spread has widened by 1795bps since the invasion, have been Sri Lanka (+449bps), Tunisia (+447bps), Pakistan (+417bps), Tajikistan (+397bps), El Salvador (+283bps), Ethiopia (+239bps), and Georgia (+186bps). Conversely, two-thirds of EMBI constituents have seen their spreads narrow since the start of the war, and just over half of them have seen their spreads narrow ytd. 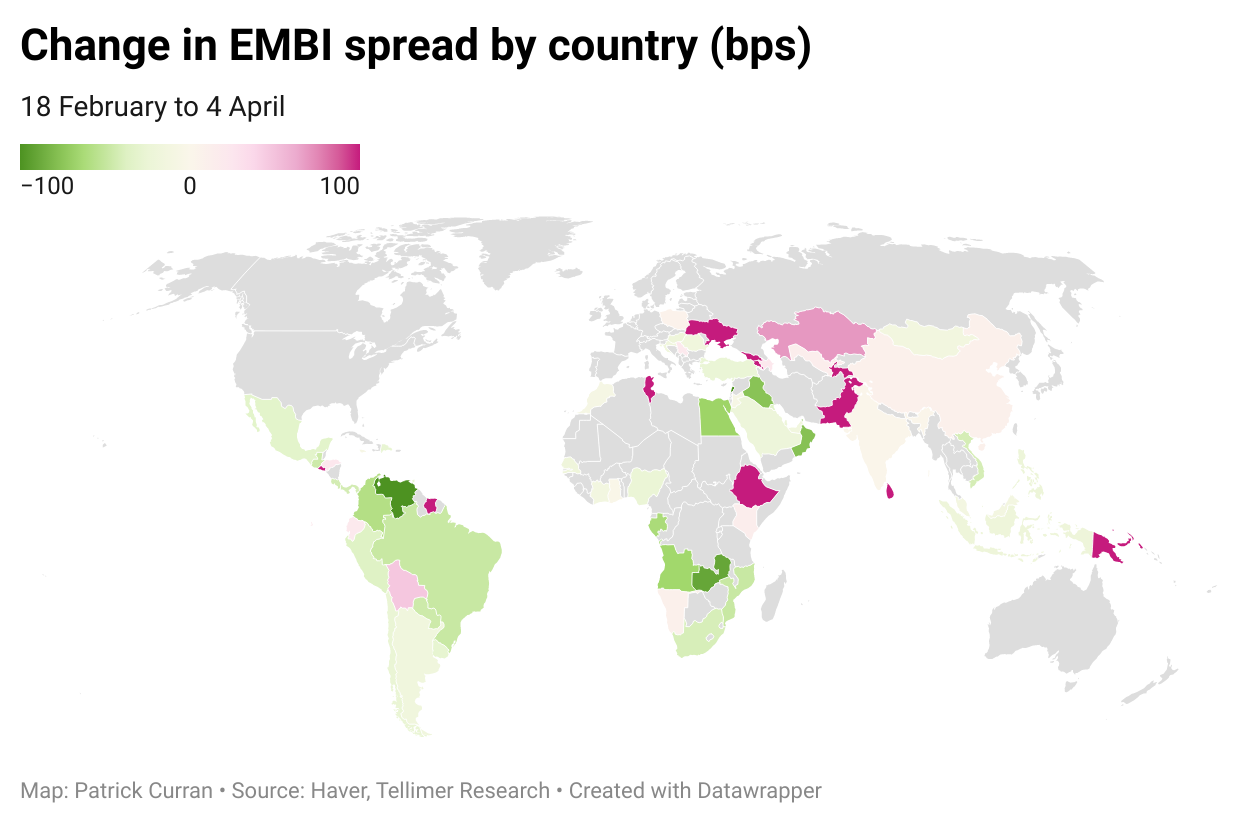 Considering alarmingly high global inflation, oil above US$100/bbl, Putin's destabilising war with Ukraine, and aggressive Fed tightening to come, EM asset performance has been shockingly benign. But moving forward, it is not clear whether EM assets will continue to be so resilient. While markets are pricing an aggressive Fed hiking cycle, the Fed is already behind the curve and there is a risk that even more aggressive hikes are required to tame inflation. And even if rates rise in line with expectation over the next year, the adjustment may not happen smoothly or linearly, so the question will be how markets – and EM in particular – respond to greater volatility and uncertainty.

Further, the longer inflation persists at current levels, the greater the risk of policy errors and that expectations become de-anchored and the Fed is forced to engineer a recession and raise unemployment to cool the economy. This would weigh severely on EM assets (the average monthly total return for the EMBI averages -0.2% during US recessions versus +0.7% during an expansion). Conversely, if the Fed doesn't respond aggressively enough to prevent a de-anchoring of inflation expectations, a more sustained environment of high global inflation wouldn't be good for EM assets, either.

Another question for EM investors will be judging where US yields end up in this particular tightening cycle. Markets are currently pricing in a "terminal rate" of 3% in the next 2 years, which is slightly above the terminal long-term rate of around 2.5% implied by the Fed. This would imply a relatively neutral policy stance, which seems to be out of step with what might be required to rein in the excessive inflationary pressures we are currently experiencing. This could mean that the market, despite the recent shift in pricing, is still behind the curve and that more hikes are necessary.

And relatedly, with the policy rate expected to be 2.5% by year-end versus Bloomberg consensus for the 10yr at 2.3%, markets are implying a continued inversion of the yield curve. This could either reflect expectations of lower future growth and/or impending recession (which would be bad for EM assets) or that inflation will be contained over the longer-term following a front-loaded hiking cycle (which would be more benign). Conversely, if the 10y2y spread reverts to the long-term average closer to 100bps, the 10yr could be in for further increases in the future, which would also be negative for EM assets.

Lastly, while proactive EM monetary policy tightening has been a tailwind for EM currencies and domestic debt over the past year, this could begin to fade if EM central banks reach the end of their hiking cycles at the same time as the Fed and other DM central banks are aggressively tightening. This could require further EM rate hikes to prevent currency weakness and a de-anchoring of inflation expectations (which are less firmly anchored in many EM), potentially pushing rates into contractionary territory and undermining the ongoing post-Covid recovery.

In short, EM assets have held up surprisingly well considering the difficult backdrop (rising global inflation and commodity prices, an increasingly hawkish Fed, and Russia’s war with Ukraine), but it isn't clear they will remain unscathed. If the Fed manages to tame inflation within the hiking cycle currently projected by markets, then EM assets could continue their relatively benign performance (albeit with limited upside). But if the Fed is forced to respond even more forcefully to cool an overheating economy and prevent a more permanent rise in inflation, then EM assets could be in for a bumpy ride.