An unfortunate combination of the oil price war and the COVID-19 pandemic has sent Brent below US$35/bbl, causing a sell-off in the high yield debt of exploration and production (E&P) companies. Prices of Iraq sovereign bonds (Sell) and Kurdistan E&P sector are down 10-15ppts since 6 March 2020 when the OPEC+ failed to reach a deal on further production cuts. There are more questions than answers now, but what seems to be quite clear is that the market will have to endure more pain before a recovery trend emerges.

In such an environment of high uncertainty, resilience in the face of a prolonged period of low prices will separate the losers from the winners. But first, all bond prices will have to fall. We reiterate Hold on DNONO 20s, 23s and 24s, GULFKY 23s and HKNENG 24s – all of which saw prices fall substantially over the past few days. Of the two bonds that have so far avoided correction, we downgrade GENLLN 22s to Hold as substantial cash reserves and low operating costs make it the strongest credit among peers, and SNMCN 23s to Sell due to its tight liquidity and high costs. 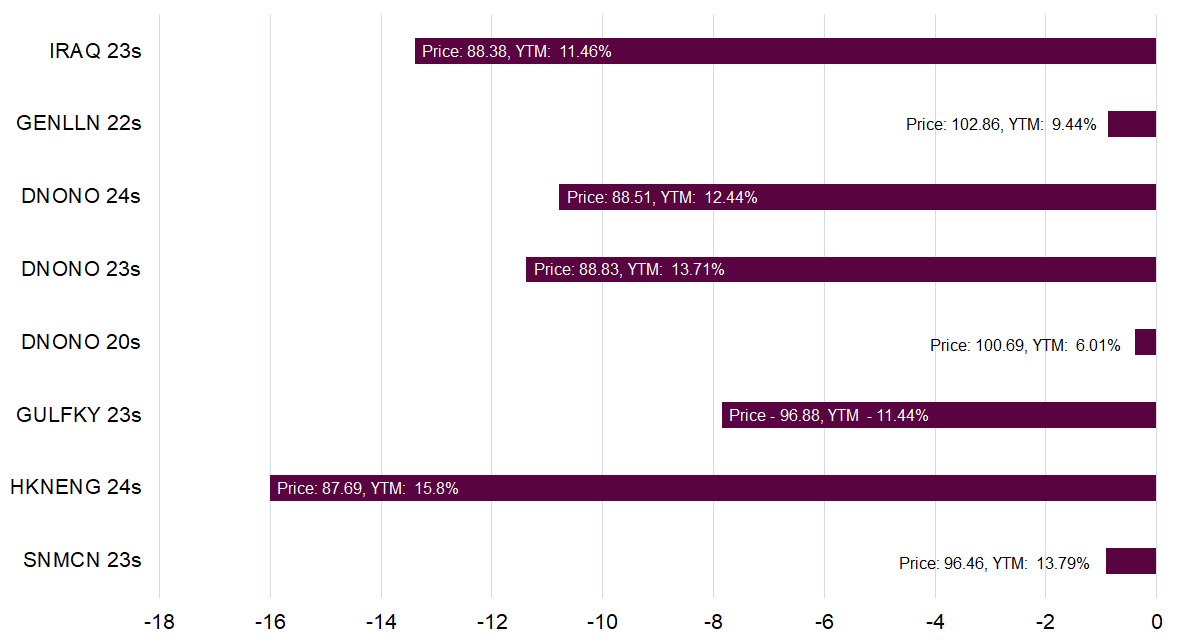 Low oil prices increase Iraq risks. Iraq’s dependence on oil prices is very high. According to the IMF, north of 90% of the country’s budget revenues were directly attributable to oil. A sharp decline in oil prices from cUS$60/bbl in Jan-Feb 2020 to US$36/bbl today could reduce federal budget revenues by more than 30%. Already, the country is faced with several crises: Popular protests which started in October 2019 continue; the government is in limbo after the resignation of Prime Minister Adel Abdul and a failed attempt of PM-designate Mohammed Allawi to win support for his cabinet nominees from the parliament and the subsequent withdrawal of his candidacy. If oil prices stay low for longer, Iraq will have to cut on expenditures. This could keep political tensions in the country elevated and affect the recipients of government funding, including Kurdistan (the federal budget for 2020 contains a fixed allocation to the region).

Like Iraq, Kurdistan budget revenues also depend on oil prices and transfers from the federal budget with respect to certain expenditures, like the Peshmerga salaries. According to Reuters, the KRG agreed to deliver 250,000boepd, or 50-60% of the region’s daily production, to the state oil marketing company SOMO, something the Federal government has long insisted on. This is likely to be in exchange for commitments to make certain budget transfers to the region, which according to media reports, could be around 12.7% in 2020. However, the Iraqi 2020 budget has not been approved yet and (according to Reuters) Kurdistan will only start delivering oil to SOMO after the new government is formed, and Baghdad starts meeting its obligations. If oil prices don’t recover, both Iraq and Kurdistan will have to moderate their spending. Potential consequences for the oil companies operating in Kurdistan are delayed payments for oil, which will likely trigger a capex revision. The latter is not desirable for the region as investments from the private sector is what keeps oil revenues coming.

Picking your exposure to Kurdistan E&P sector. No company is immune to a sharp decline in oil prices and the potential consequences it may cause. However, some are in a better position than others. The companies with high production, low operating costs, low discount to Brent and high liquidity would be in a better position to weather a period of low oil prices. Genel (GENLLN) stands out on all criteria and has the strongest standalone credit profile. DNO (DNONO) ticks most of the boxes, but exposure to the North Sea region compromises its low-cost position. Gulf Keystone (GULFKY) has the highest discount to Brent in the sector, which could overshadow an otherwise very low cost and high cash balance. HKN Energy’s (HKNENG) weakness comes from low production and significant capex requirements. ShaMaran Petroleum (SNMCN) ranks weakest on all key metrics (Table 1).

Some will be paid more than others. Lower oil prices will reduce the price per barrel received by the companies, but not in the same way for all. Each oilfield has its own discount to Brent depending largely on quality of the oil. HKN Energy has the lowest discount and hence receives the highest prices for each barrel of oil entitlement. Gulf Keystone is on the other end with the highest discount and the lowest realised oil price per barrel. 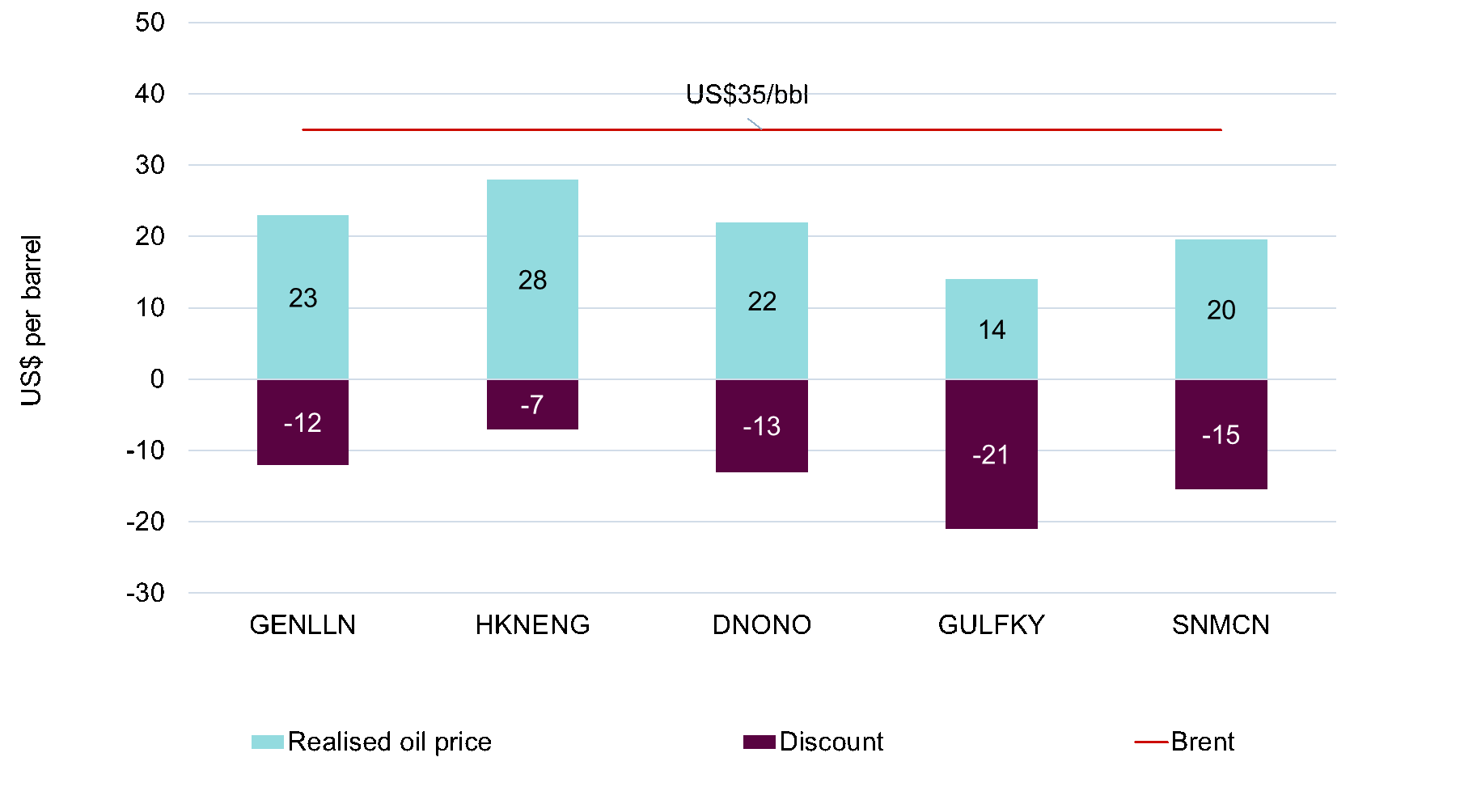 Costs – the lower the better. The next critical variable is cost of production. We usually speak about it in terms of an FCF-breakeven oil price, a minimum price per barrel that allows the company to cover all direct operating cost, corporate overheads, interest on debt, capex and discount to the benchmark oil price given its entitlement. If the oil price stays at US$36/bbl and the companies do not reduce capex, we expect all five producers we cover in Kurdistan to be free cash-flow negative in 2020. Most of them (except for ShaMaran) can afford it due to high cash reserves and largely low debt levels. Historically, the industry has taken a prudent approach to investments aiming to minimise the payback period. If the oil price stays below US$40/bbl, we expect capex to be revised down. That is why we focus on the cost before capex. According to our estimates, Genel has the best cost position and ShaMaran needs at least US$42/bbl to cover opex, G&A, and interest payments in 2020 (Figure 3). 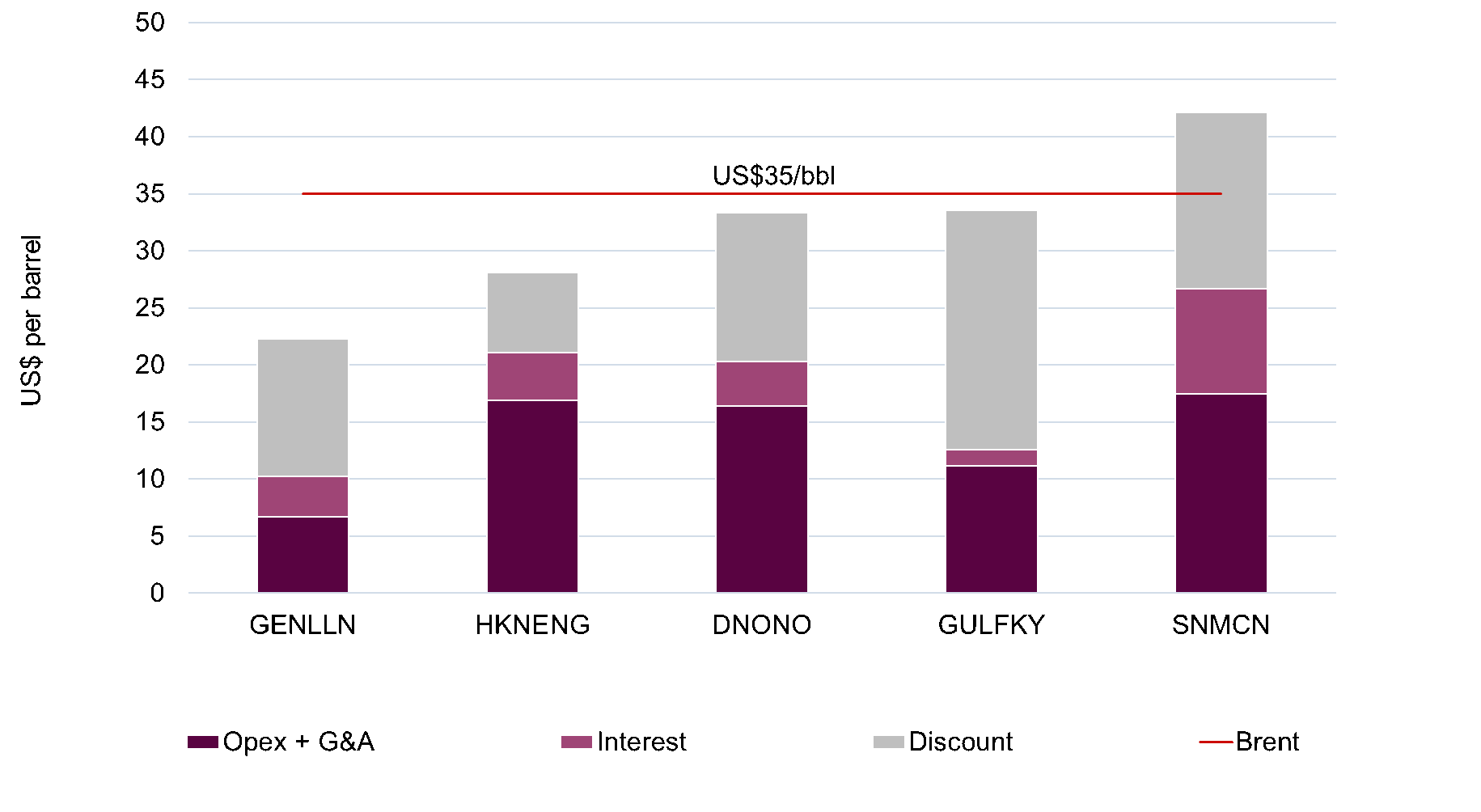 Production – the higher the better. If the companies cut capex, reaching production targets could be delayed. The producers developing new fields such as HKN Energy and ShaMaran could continue to rely on low production volumes for longer, which together with low oil prices, could delay even further the accelerated recovery of the accumulated cost pools. For the mature fields with relatively high decline rates like Tawke (DNO and Genel), a capex cut could lead to lower production. Other things being equal, a higher production is linked to higher earning power and higher resilience to price shock and potential volume declines. DNO, Genel and Gulf Keystone, therefore, are in a better position compared with HKN Energy (which still requires substantial investments in 2020 to meet its production targets) and ShaMaran (at a disadvantage both because of high capex and a relatively low non-operating share of the PSC at 27.6%). 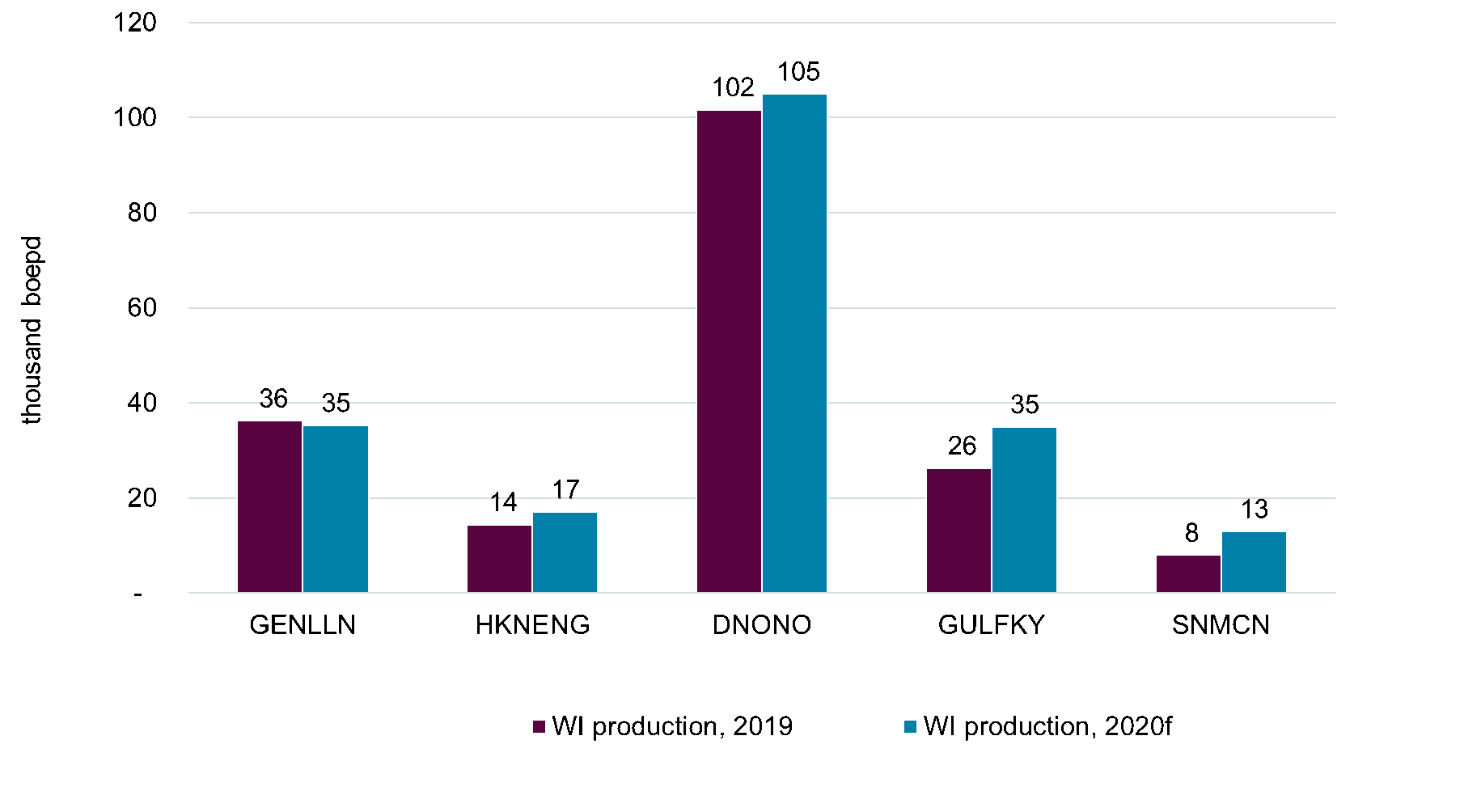 Liquidity – some companies are better prepared than others. Genel and DNO have the highest level of accumulated cash reserves. In the case of Genel, they are higher than the company’s debt and twice as high as the 2020 capex guidance released in January. Genel and DNO develop the same fields in Kurdistan, but DNO recently started rolling out operations in the North Sea, which at the oil price of US$35/bbl do not look profitable even taking into consideration the highly supportive fiscal regime in Norway. The size of DNO’s operations in the North Sea was not significant enough to offer a reliable protection from Kurdistan-specific risks, but the utilisation of financial resources outside of Iraq is high and will probably have to be aligned with the new oil price environment. Gulf Keystone is another name with high cash reserves and yet unclear investment requirements in 2020. HKN Energy may have to revise its investments down in 2020. ShaMaran is most at risk due to tight liquidity and high per-barrel cost even before capex. 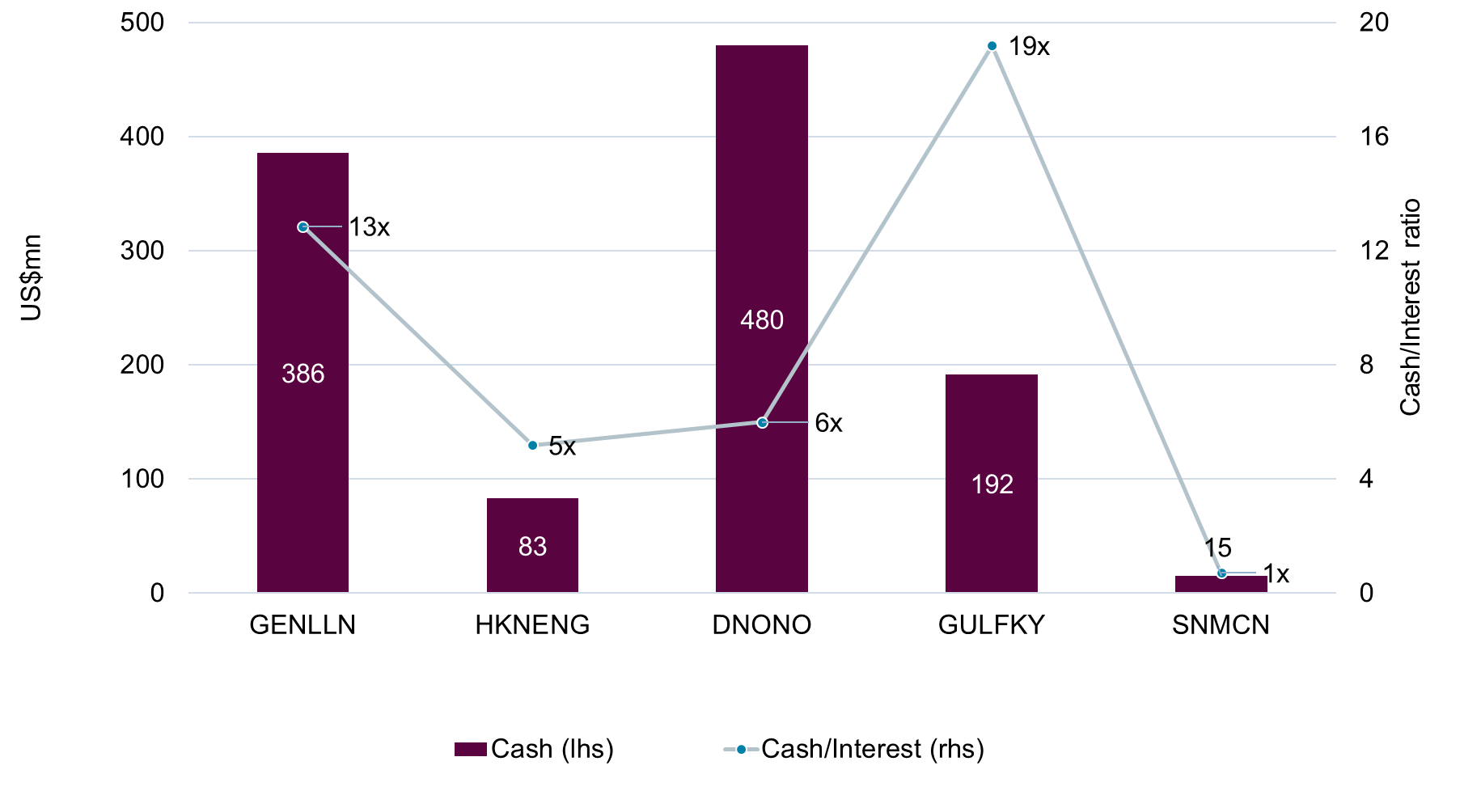 Very small debt repayments in 2020. Genel, Gulf Keystone and HKN Energy have no debt repayments in 2020. DNO is the only company with a notable, yet not high, debt with US$140mn bonds due for repayment in June and some US$86mn NOK-denominated exploration facility, secured by Norwegian tax receivables usually settled in November-December. Given DNO’s cash reserves, the ability to generate cash in Kurdistan even in the low oil price environment and potential capex cuts if prices stay low for longer, we are not concerned about DNO’s ability to smoothly repay debt in 2020. The other issuer with upcoming principal repayments is ShaMaran with US$15mn due in 2020. Although, the amount does not appear high, Shamaran’s tight liquidity could make it difficult. All but ShaMaran have material cash reserves, which cover interest payments with a wide margin. Given the highly uncertain nature of 2020 cash flows, we focus on the cash-to-interest rather than the EBITDA-to-interest ratio to estimate the issuers ability to meet interest payments (Figure 5).