What a global economic slowdown could mean for Africa

Currently, a big topic across financial markets has been concern of a global economic slowdown. Given Africa’s exposure to China, we have decided to focus this piece specifically on the the risk of a slowdown in China. China has been the only country to implement a zero covid-19 policy in the post pandemic era which has suffocated economic activity in the world’s second largest economy. There has been some talk that the number of new cases has been rising again, so China may implement another round of lockdowns. The negative impact of these lockdowns and restrictions is likely going to be felt for many months to come. This comes on the back of lingering war threats. 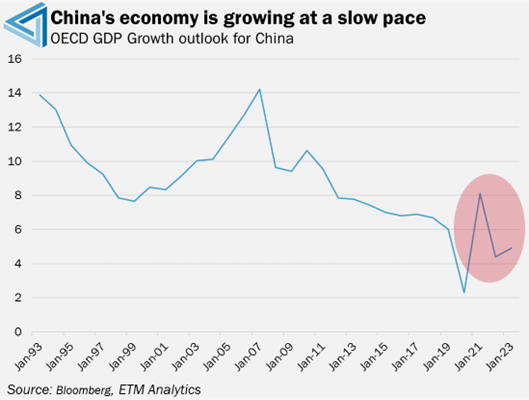 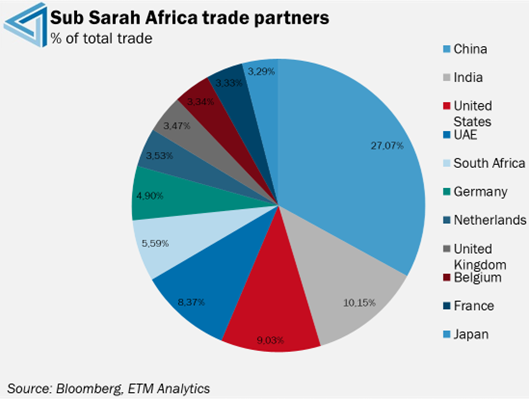 Sub-Saharan Africa’s biggest trading partner is China, which makes up 27% of the region’s trade. The second biggest partner is India which makes up 10%. Therefore, there is a lot of concern around the impact of a slow down in China on Africa. We are going to take a closer look at the specific risks to commodities and countries within Africa.

Bilateral trade between Africa and China has been increasing on a year-on-year basis, therefore illustrating that Africa’s reliance on China continues to rise. Africa is a resource-rich continent, which is why the majority of foreign currency flows into Africa are related to commodities. The main commodities that China imports are minerals, oil and agricultural commodities. China's top African trading partners are South Africa, Nigeria, Angola, Egypt and the Congo.

Nigeria’s biggest export to China is brent crude. With supply already very tight in the oil market, it is unlikely that we would see a major decline in Chinese demand for oil. In fact, the issue is on the supply with Nigeria’s production at a multi-decade low. Nigeria’s second biggest export is copper, in the latest news, China has been increasing its copper imports, this could suggest that demand for the base metal may be more resilient than first expected. However, in the coming months, the risk is to the downside.

Egypt’s exports to China include oagricultural products, such as fruits and nuts as well as fuels and oil. China has been Egypt’s biggest trading partner for the last eight years. Therefore, Egypt’s exports would almost certainly be hit if economic conditions in China deteriorate further. Egypt is heavily exposed to the war in Ukraine, and has already seen its current account take a big hit this year.

Congo, Zambia and South Africa are also heavily exposed to Chinese import demand and will therefore also feel the effects of a slowdown in China. Should Chinese demand decrease in the months ahead, the trade accounts of most African countries would take a hit, adding to the headwinds facing African FX.

Which commodities are likely to be affected the most by China? (China’s commodity imports from the world in $bn)

China is the world's second largest trade destination, meaning that any changes in China are likely to have a large impact on global commodity prices. From a commodity point of view, the commodities mentioned above are China's main imports therefore these commodities have the biggest exposure to a further slowdown in China and the price of these will likely be the most affected.

China is now emerging as one of the biggest importers of soybeans. It has signed contracts that maintain its commitment to import billions of dollars of soybeans from the United States.

China is the biggest importer of iron ore by some margin. Imports total around $99 billion annually, which is over 60% of total global iron ore imports. Considering the situation in China's property sector, we can expect more trouble in the iron ore market. Iron ore is perhaps tied early-cycle property activity in China more than any other global commodity, as the sector produces nearly a third of China's steel and iron ore demand. 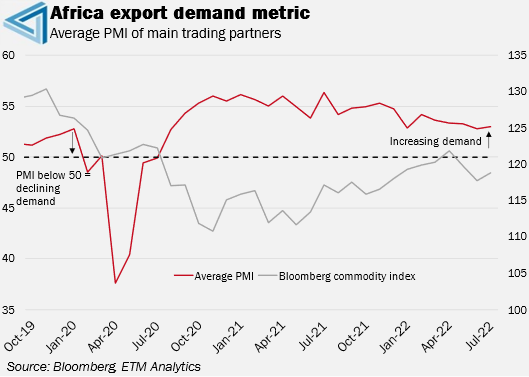 China has been investing heavily in Africa for many years, providing the necessary funding to improve infrastructure. In many instances, Africa pays for these infrastructure improvements by pledging oil and gas shipments, copper and iron ore and other commodities. These agreements have made Africa extremely dependent on China in terms of trade.

Our expectations are that the risks of China’s zero-covid policy are tilted to the upside, and we are hopeful that we shouldn’t see as harsh of a lockdown as we did in March again. However, geopolitical tensions between Beijing and Washington have intensified, which could impact trade between the world’s two largest economies. This is after US Speaker Pelosi visited Taiwan. The US would like to reduce its dependence on China for its chip-making. The US wants to collaborate with Taiwan, which is one of the world’s largest chip makers.

We have created a demand metric using the average manufacturing PMI for Sub-Sarah’s Africa’s main trading partners. A reading below 50 would indicate that the demand for African commodities would likely decline. Currently, the demand metric is above 50, which suggests that demand for African exports remains healthy. While the Africa export demand metric remains buoyed in positive territory, confidence data out of China, Africa’s largest exporting partner, has plunged, suggesting that demand could ease in the months ahead.

Bottom line: Governments and multi-national mining companies around the world will need to consider new strategies to ensure greater resilience, security and sustainability now that China’s import demand faces potent headwinds. For commodity producers, a deterioration in demand will hit commodity-dependent economies hard as it makes the extraction and export of such materials less attractive. This is a concern for Africa, given that a significant portion of economic activity on the continent is dependent on commodities. That said, global supply issues remain acute, implying that global commodity prices will remain lofty in the year ahead. Moreover, Africa is forming part of the developed world’s, particularly Europe’s, diversification strategy away from Russia, which is bolstering investor interest in the continent.