'Westlessness': What it means for investors in EM and FM

What do the issues discussed at this year's Munich Security Conference, which concluded on 16th February, have to do with emerging and frontier market investing? Everything; at least for those interested in looking beyond this month’s or quarter's returns. Below are our thoughts following this year's edition of the conference.

The 'West' and the ideals it represents are under threat from: 1) internal factors (illiberal and isolationist populist politics – this might be summarised by the term 'Trumpism', although the drivers of this 'Westlessness' predate the election of US President Trump); and 2) external factors (Russia, China and non-state actors). The results are in plain sight: electoral manipulation, authoritarianism, protectionism against free trade and migration, and the erosion of multilateral coordination on security, trade, migration, technology and climate.

Most consider this a riskier environment for investment in emerging and frontier markets. But this is not the case because neither was the environment in an era of 'Westfulness' always that supportive for sustainable growth and stable politics in many of these markets, nor is the alternative ('Eastfulness') necessarily avoidable or so much worse. 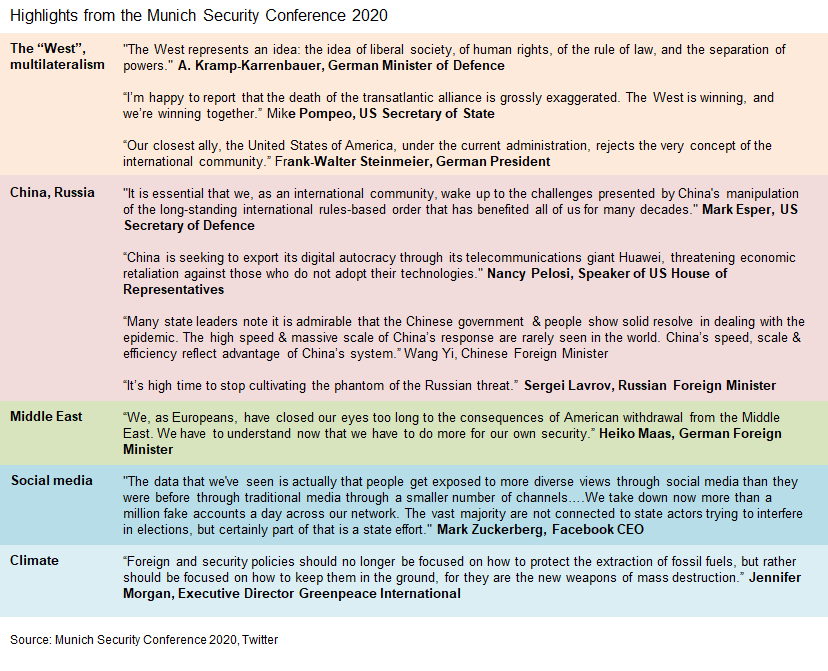 'Westlessness': from one imperfect world to another for EM and FM investors

Westlessness is the title of the flagship report accompanying the annual Munich Security Conference, which ran from 14-16 February. The term refers to the following:

Defined as such, Westlessness is commonly considered a negative trend for investors in emerging and frontier markets:

However, this is unfair for three reasons.

(1) Emerging and frontier markets have spent their whole existence being buffeted between the quasi-imperialist spheres of Westfulness and non-Westfulness (presumably, 'Eastfulness' would be the reciprocal term). This could describe the tussle globally between the US and USSR in the Cold War, in south and south-east Asia currently between US-aligned countries and China, or that in eastern Europe and central Asia, with the US and EU competing against Russia (and to a lesser degree China).

(2) The alternative to Westfulness is not necessarily more unhelpful for emerging and frontier markets. While mainstream media coverage of China’s BRI, for example, generally paints it as an exploitative, colonial strategy (over-charging for projects, unsustainable debt burden, economic value extraction, client state dependency) the reality is much more nuanced. China’s capital injection does not change the political and economic trajectory of recipient countries. It accelerates those countries on their existing trajectory. In this respect, a lot of capital from China (to a well or poorly run country) is no different from a lot of capital from the 'West' (to a well or poorly run country).

(3) The historic impact of the West on emerging and frontier markets is controversial. Arguably there was often hypocrisy in the commitment to the ideals, described as Western, at home while they were expediently jettisoned overseas. The realpolitik of foreign policy for the 'Western' bloc has often superseded the spread of the ideals it has so publicly championed. The authoritarian governments supported by the 'West' under either a military guise (e.g. Egypt, Indonesia, Latin America, Nigeria, Pakistan, Thailand in the 1980s), a monarchic one (the GCC, Jordan, Morocco, or Iran under the Shah), or a republican civilian one (South Africa under the apartheid era) are examples in the sphere of political governance. The excessive supply of debt to Latin America in the late 1970-80s and to East Asia in the 1990s is an example of the damage from unfettered market economics. The preservation of the vetoes and majority voting rights in multilateral organisations (e.g. the UN Security Council or the IMF Board) suggests, from the point of emerging and frontier countries, that the commitment to multilateral coordination via international bodies is not the same as multilateral equality in those bodies (and without that equality the outcome of that coordination is inevitably skewed in favour of its strongest members).

The use of the word 'West' to represent these political, economic and international relations ideals is offensive to anyone not from the geographic West who supports these ideals or who can stake a rival claim to authoring these ideals in the first place. It is an echo of the language used by those who talk of a clash of civilisations. But we leave this debate on terminology to another day.

However inappropriate the specific word 'Westlessness' is, it does represent real change underway in the world. But these changes are from one imperfect reality to another, not from one romanticised, ideal reality to an imperfect one. An acknowledgement of the real-world imperfections of 'Westfulness' (both in the 'Western' countries and in the non-'Western' countries they impact) leads to a more useful, less partisan, prediction of what a world characterised by more 'Eastfulness' might entail, whether for defence analysts, politicians or investors.

NATO built for another era

Transatlantic stresses were evident at the Munich Security Conference 2020. The transatlantic (US and European) geopolitical alliances, mainly NATO but also US-UK, France-Germany, were constructed to combat the threat of the USSR (a threat in both the military and political philosophy spheres) and may no longer be fit for current purposes.

These alliances have not evolved despite the change in the threats to the members of these alliances. NATO members, for example, cannot agree on what is the main threat which binds the alliance: is it China, Russia, the control of personal data and standards in technology, climate change, terrorism, migration, or all of these?

The result is division and incoherence. This was on full display in the contrasting tone and content of remarks from some of the highest profile delegates:

This division also inhibits the ability of the 'West' to stabilise and de-risk protracted conflicts in the emerging and frontier markets. Iran-Saudi, India-Pakistan, Israel-Palestine and Armenia-Azerbaijan tensions were clearly on display. However, as we have argued above, it is not the case that when the 'West' was united, more confident and had a clearer mission statement (the era of 'Westfulness') that these sorts of conflicts in the emerging and frontier world were any less risky.

Footnote on the Munich Security Conference

China’s BRI: Not a Marshall Plan or an East India Company, 4 January 2019

Trump impeachment or election loss: what would it mean for emerging markets?, 14 October 2019