2021 Themes: West Africa’s single currency – the value is in the journey

In September 2020, the Economic Community of West African States (ECOWAS) agreed to postpone the adoption of its single currency “eco”, from 2020 to an undetermined future date. A bit of background: ECOWAS Heads of States in June 2019 formally committed to adopt the eco in 2020. However, as a result of the disruption caused by Covid and the inability of some of its members to meet the economic criteria set for convergence, the plan was postponed.

Even before Covid, the currency union had many economic and political bridges to overcome. The timeline seemed short to bridge the gap in macroeconomic conditions between members of the French-speaking West African Economic and Monetary Union (WAEMU) – which uses the CFA franc (XOF), pegged to the euro – and the West African Monetary Zone (WAMZ) – the Anglophone counterpart where countries each have their own currencies. 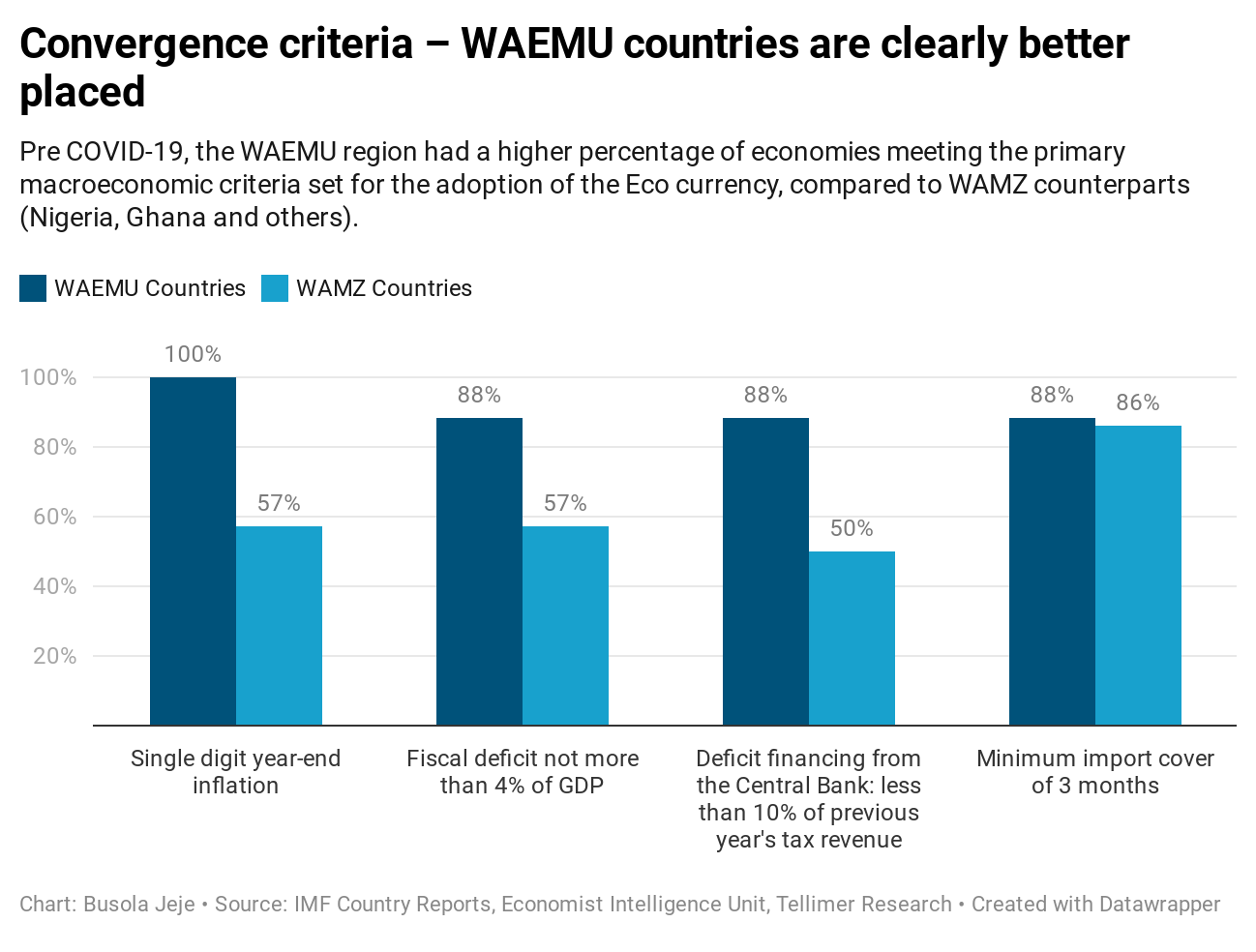 The sad truth: The eco still seems very far off

As it stands, it remains unclear when the eco’s adoption will finally see the light of day, given the divergent economic performance among its members and questions over political will.

It is not even obvious that the ECOWAS represents an optimum currency area, given the characteristics and economic structures of its diverse membership, particularly the WAMZ countries (WAEMU countries are better suited due to their shared CFA franc). Despite the ECOWAS’s Trade Liberalisation Programme, current trade practices do not support regional convergence, as trade among members accounts for only 9% to 11% of the entire region’s trade.

The problem of macroeconomic convergence is also likely to remain, further exacerbated by Covid. Few countries will meet the deficit target in the near-term, while inflation performance also diverges widely. According to IMF WEO projections, most members will reach the 4% deficit target by 2023, although the only two that do not are its biggest members (Nigeria and Ghana).

Turning to monetary policy, we doubt the WAMZ countries are eager to give up monetary policy independence and the flexibility to address their own domestic circumstances. A case in point this year has been Ghana opting for external borrowing in order to improve dollar liquidity while keeping policy rate high at 14.5%, in sharp contrast to Nigeria’s policies of lower interest rates and capital control-like measures that are causing severe FX illiquidity.

Moreover, the ECOWAS region is so diverse, a common monetary policy is unlikely to be appropriate for all members at the same time, until there is much greater synchronisation in their economic cycles. In terms of exchange rate mechanisms, a common currency would remove the role of the exchange rate as a shock absorber for the WAMZ countries who currently manage their own currencies. For instance, Nigeria devalued the official naira by 15% against the US$ in March in the face of lower oil prices. Sharing the eco currency with other West African countries would constrain that sort of flexibility. In contrast, the CFA franc has strengthened by 10% against the US$ since then. 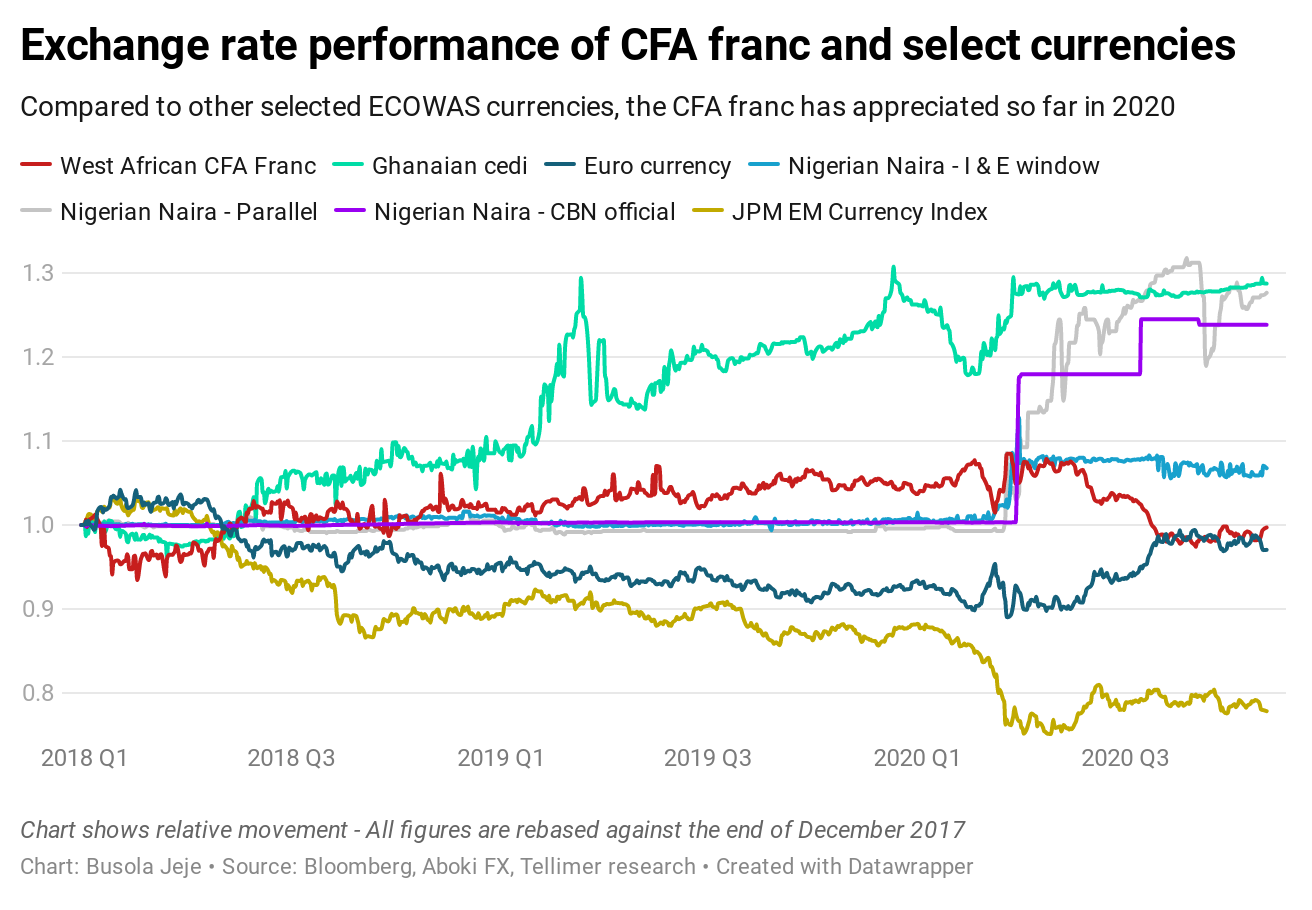 Value lies in the process, not necessarily the end goal

While full adoption of the eco seems a long way away, the process towards it might still be beneficial in the near term. Discussions are underway to develop a new road map for the single currency. Given the disruptions from Covid, the new timeline should be realistic enough for WAMZ countries to develop more effective policy measures and implement them. A journey towards improved fiscal discipline and better regional policy coordination should positively impact the investment thesis for West Africa.

Improved intra-regional trade should be a near-term focus

An easier win for the ECOWAS countries would be to promote intra-regional trade and labour market mobility, instead of (or as well as) pursuing a single currency. Over time, West African trade has become increasingly extra-regional, with trade among members accounting for only 9-11% of the region’s entire trade. Interestingly, four ECOWAS members have still not ratified the African Continental Free Trade Agreement (AfCFTA) – which seeks to eliminate tariffs on 90% of goods traded in Africa – with the 5 December deadline for ratification looming. Nigeria, which recently ratified the agreement, has maintained a year-long closure of land borders with neighbouring Niger and Benin, with no significant progress made on resolving trade issues.

That said, holding on to the hope that the remaining four countries do eventually ratify the AfCFTA, exploiting its benefits when it comes into force (slated for 1 January 2021) should be the ECOWAS’s key focus in the near term. The free trade agreement provides the West African region with the ability to diversify from exports of primary products (over 90% of the region’s export earnings come from oil, cocoa and gold), build up manufacturing capabilities and promote local content (a key prerequisite for Nigeria). With improved trade, the benefits of a single currency would become more meaningful for the region and political momentum might then be easier to build. 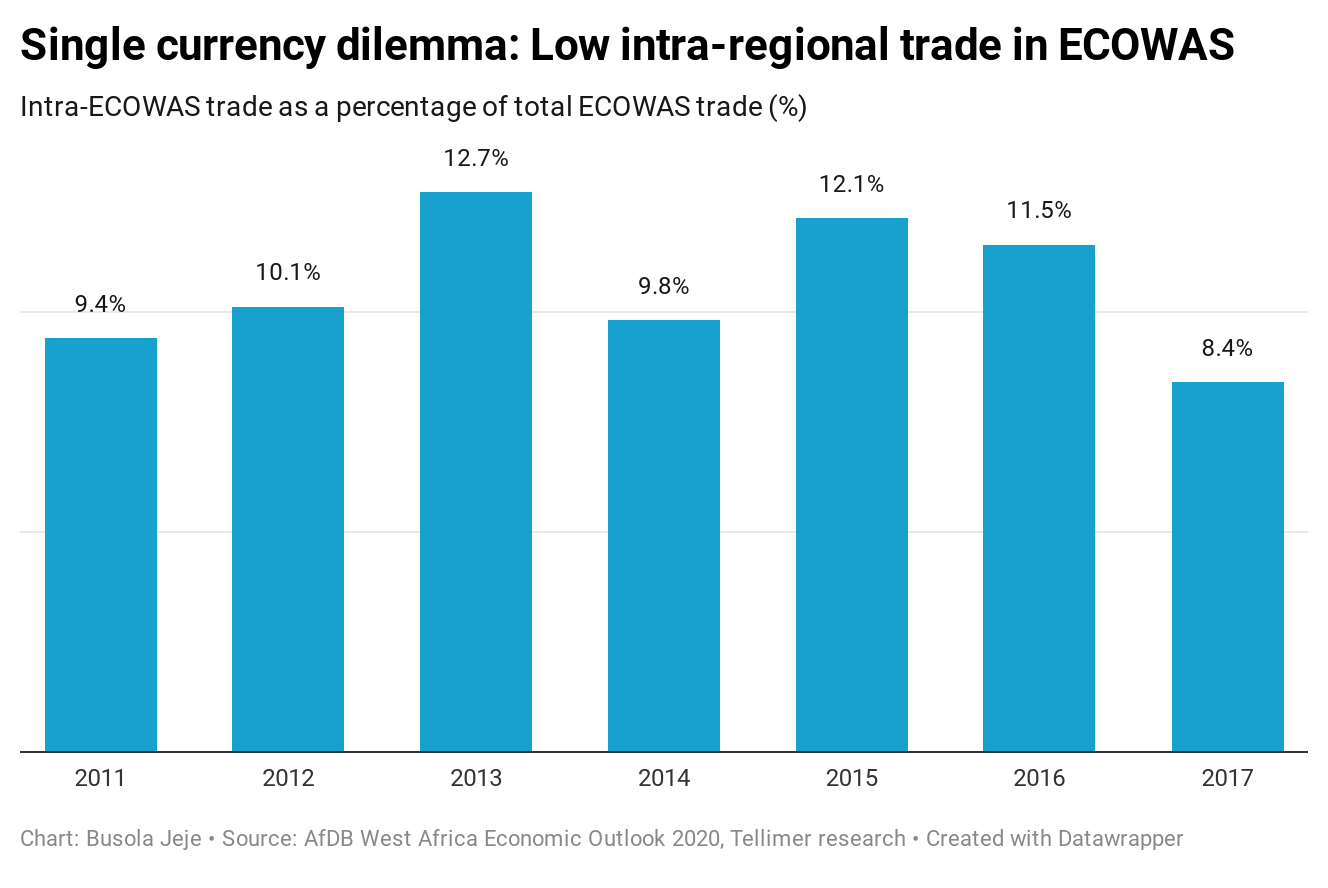