West African countries are on a fundraising spree

West African countries urgently need funding. In the past week, the IMF approved US$638mn for Benin, Senegal obtained EUR121mn for emergency food production from the African Development Bank (AFDB), and Ghana finally agreed to go to the IMF for help.

In Nigeria, the state oil firm blocks the Exxon-Seplat deal in court, and election season continues as the ruling party selects its vice-presidential candidate. Elsewhere, another disease shows up in Ghana.

Ghana has postponed its midterm budget review to 25 July (from 13 July) due to its ongoing discussions with the IMF. We do not expect the budget performance from the first half of the year to have been impressive. The Ghanaian government had been optimistic about the likely positive impact of E-levy (tax on mobile money) on its fiscal health.

Unfortunately, the additional revenue from the e-levy drive probably paled compared to the country's obligations – it is clear from the country's decision to reach out to the IMF. Our research suggests Ghana is one of the countries most vulnerable to tight global financial conditions. 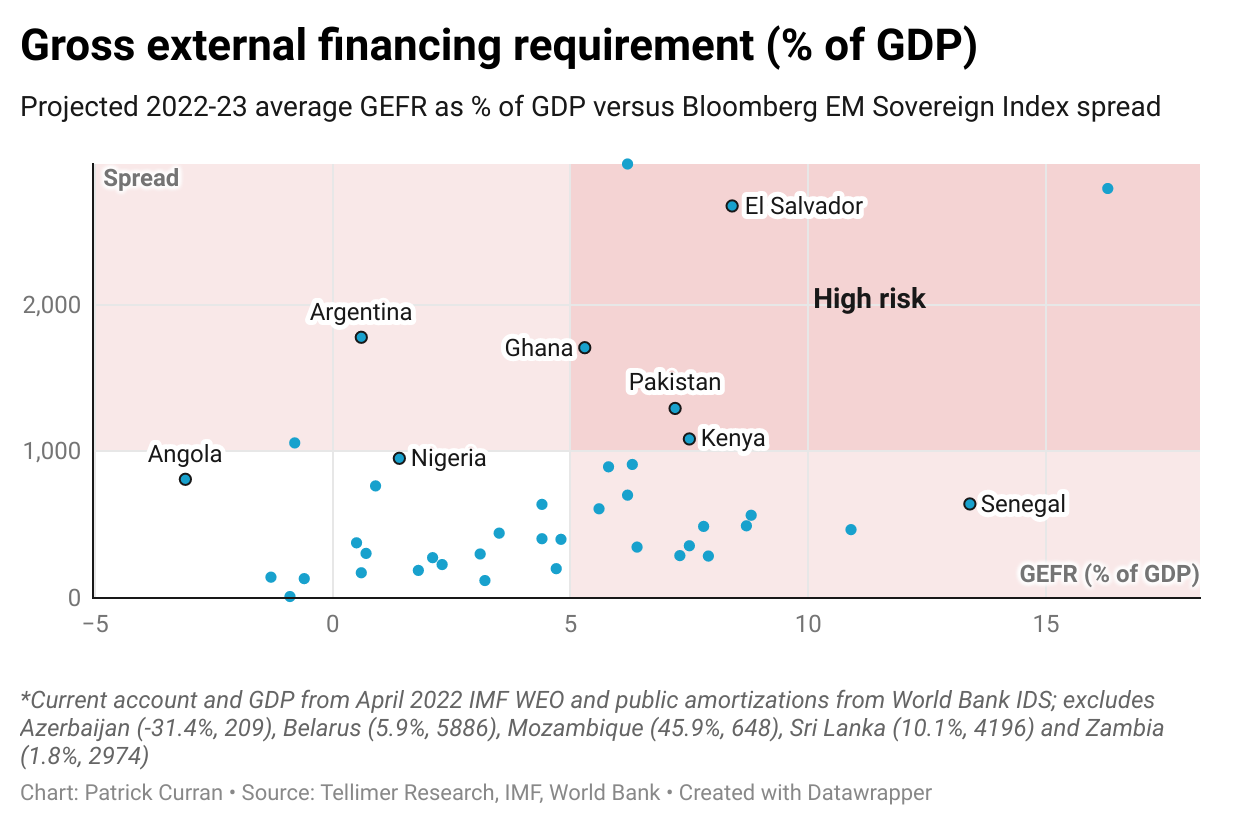 From our recent chat with investors, they expressed concerns about Ghana's ability to deliver fiscal consolidation, especially as the next election approaches, while noting concerns that falling reserves or an FX/inflation spiral could bring forward the timing of a debt crisis.

The decision to consult the IMF is a step in the right direction. This only became clearer after Ghana's CPI inflation for June came in at 29.8% yoy, up from 27.6% yoy in May and the highest since 2004. Bread prices were up 44% yoy and overall food inflation was above 30%.

The IMF has approved the release of US$638mn as an extended credit facility for Benin under a 42-month arrangement. This comes only a few weeks after the Fund released US$216mn of special drawing rights (SDR161.82mn) to Senegal. The agreement involves an initial disbursement of US$143mn (SDR108mn), which the government plans to use as budget support.

The funds disbursed will give much-needed support to Benin's economy, which has been ravaged by the deteriorating security challenges in the north, the impacts of the Russia-Ukraine war and Covid-19, as well as significant climate change risks. The IMF forecasts the economy will grow by 5.7% in 2022 (2021: 7.2%).

Senegal in line for EUR121mn for emergency food production

Senegal's forex reserves have improved, as the African Development Bank (AfDB) has approved a US$123mn loan. This is the first of the fund's US$1.5bn African Emergency Food Production Facility, an emergency agricultural programme aimed at helping small-scale farmers in Africa grow 38mn tons of additional wheat, corn, rice, soybeans and other crops over the next two years.

The agricultural programme is part of the AfDB's measures to mitigate against the rising food insecurity risks emerging from the Russia-Ukraine war, forcing many countries into food protectionism measures. As of end-April, the AfDB group's active portfolio in Senegal comprised 30 projects worth €2.4bn.

Nigeria's state oil firm, the Nigerian National Petroleum Corporation (NNPC), secured an injunction to block Exxon Mobil's offshore and shallow water assets sale to Seplat – Nigeria's leading indigenous upstream oil producer. Earlier in February, Seplat announced an agreement to purchase Mobil Producing Nigeria Unlimited from Exxon Mobil Corporation for US$1.3bn. However, in May, the Federal government refused to consent to the transaction, due to overriding national interest, among other reasons. 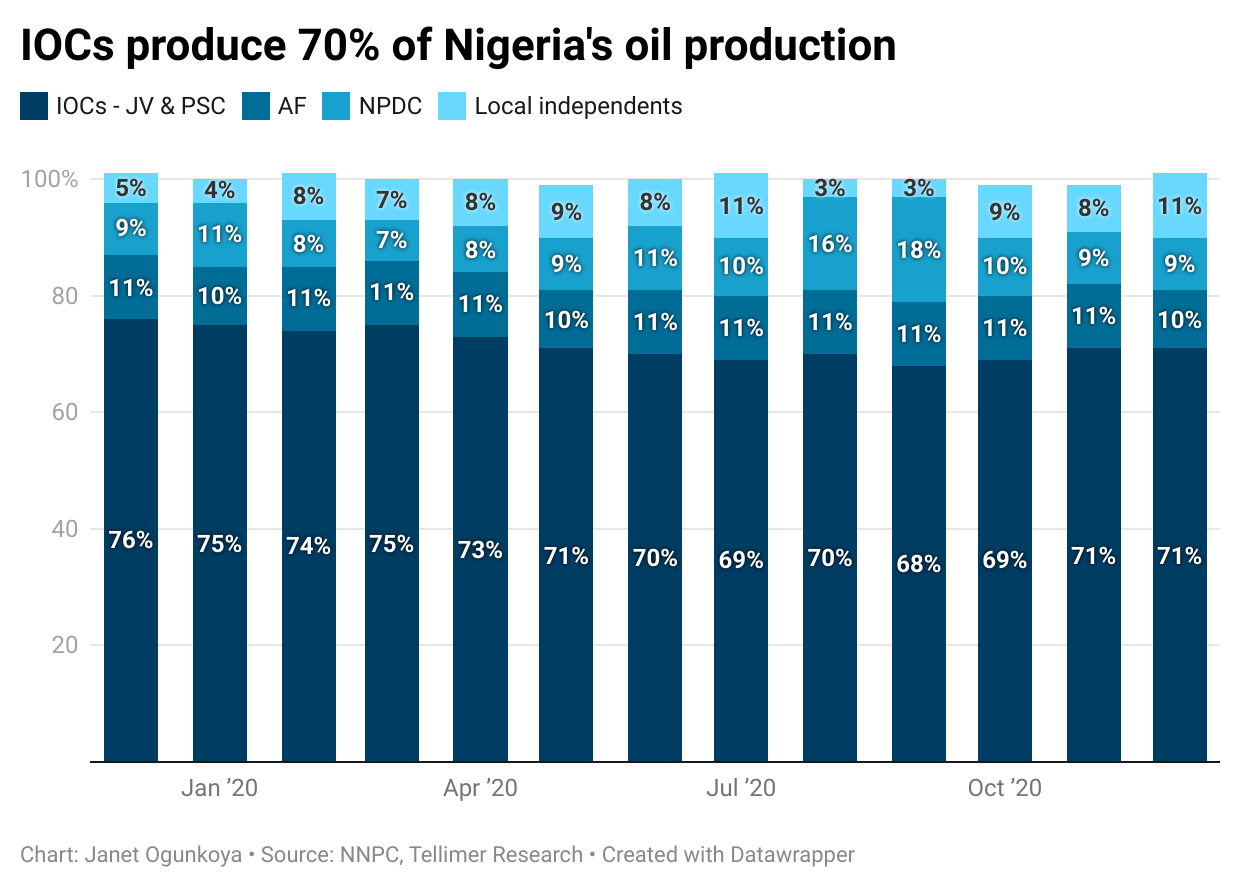 With more oil major exits (Total and Shell also have exit plans), the NNPC's stance on this sale sets a shaky precedent for others. Moreover, with oil production on a steep decline, the country needs to be doing more to attract much-needed investment into the sector. The hearing for the Mobil-NNPC case has been scheduled for 15 July. We are closely monitoring how this unfolds.

The three most popular parties in the upcoming 2023 elections have decided who their flag bearers are. We previously explained some of the unspoken criteria behind these selections – particularly ethnicity and religion.

Going by public sentiment, the ideal balance for the 2023 election will likely be a southern president with a northern vice president. However, the religious distribution seems more flexible – a Muslim president and a Christian vice president or vice versa.

The ruling party, APC, recently confirmed their vice-presidential candidate, and there has been uproar due to various Boko Haram controversies surrounding the candidate.

Marburg: Another infectious disease in Ghana

A few days ago, preliminary findings in Ghana showed that there had been two cases of the Marburg virus. If confirmed, that would make it the first case in the country and the second in West Africa. Marburg is a highly infectious viral haemorrhagic fever in the same family as the more well-known Ebola virus. Previous outbreaks and sporadic cases of Marburg in Africa have been reported in Angola, the Democratic Republic of the Congo, Kenya, South Africa and Uganda.

The disease is known to have a high fatality rate, with case fatality rates ranging from 24% to 88% in previous outbreaks. There are currently no vaccines or antiviral treatments approved for the Marburg virus. Again, this is a reminder of the poor state of health facilities in West Africa – the region cannot afford another viral outbreak.

Nigeria's May inflation came in at 17.7%, and analysts forecast that June inflation will be above 18.5%. Although global food prices seem to be reversing the trend – down 2.3% mom in June (the third consecutive monthly decline) – Nigeria has many supply and demand side factors driving its inflation.

Like Ghana's CPI, the producers' purchasing index (PPI) has steadily increased. May PPI came in at 33.5%, and analysts expect June's PPI to come in at 35%.

Join our Head of Sovereign & Fixed Income Research, Stuart Culverhouse and Senior Economist Patrick Curran as they discuss the outlook for EM-Frontier Sovereign Bonds for H2 2022. Free to attend for all market participants. Register here.

Market activity was low on the Nigeria stock exchange in the past week, due to public holidays. In terms of performance, the all share index declined by 0.5% for the second week in a row, bringing the ytd return to 21%. 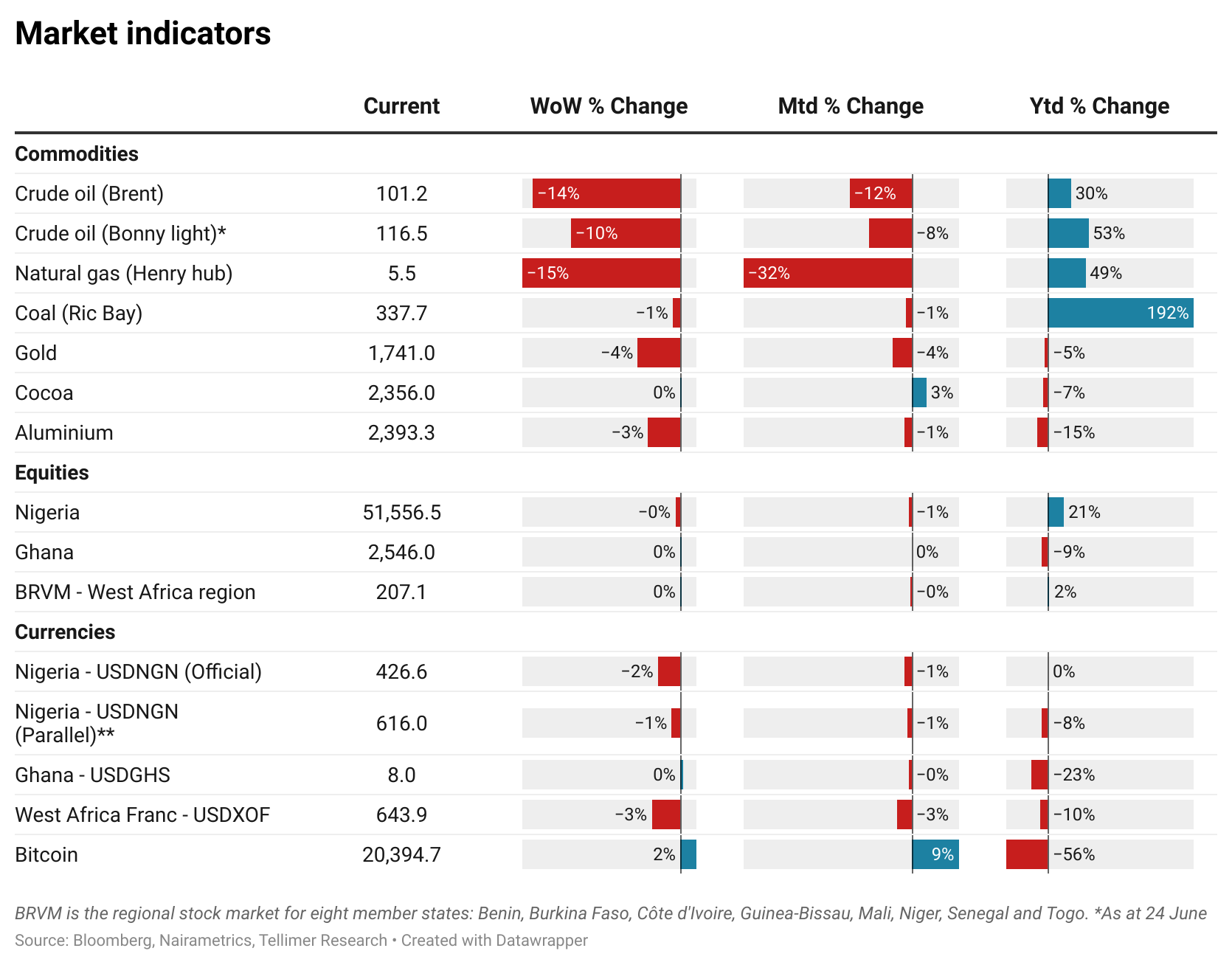 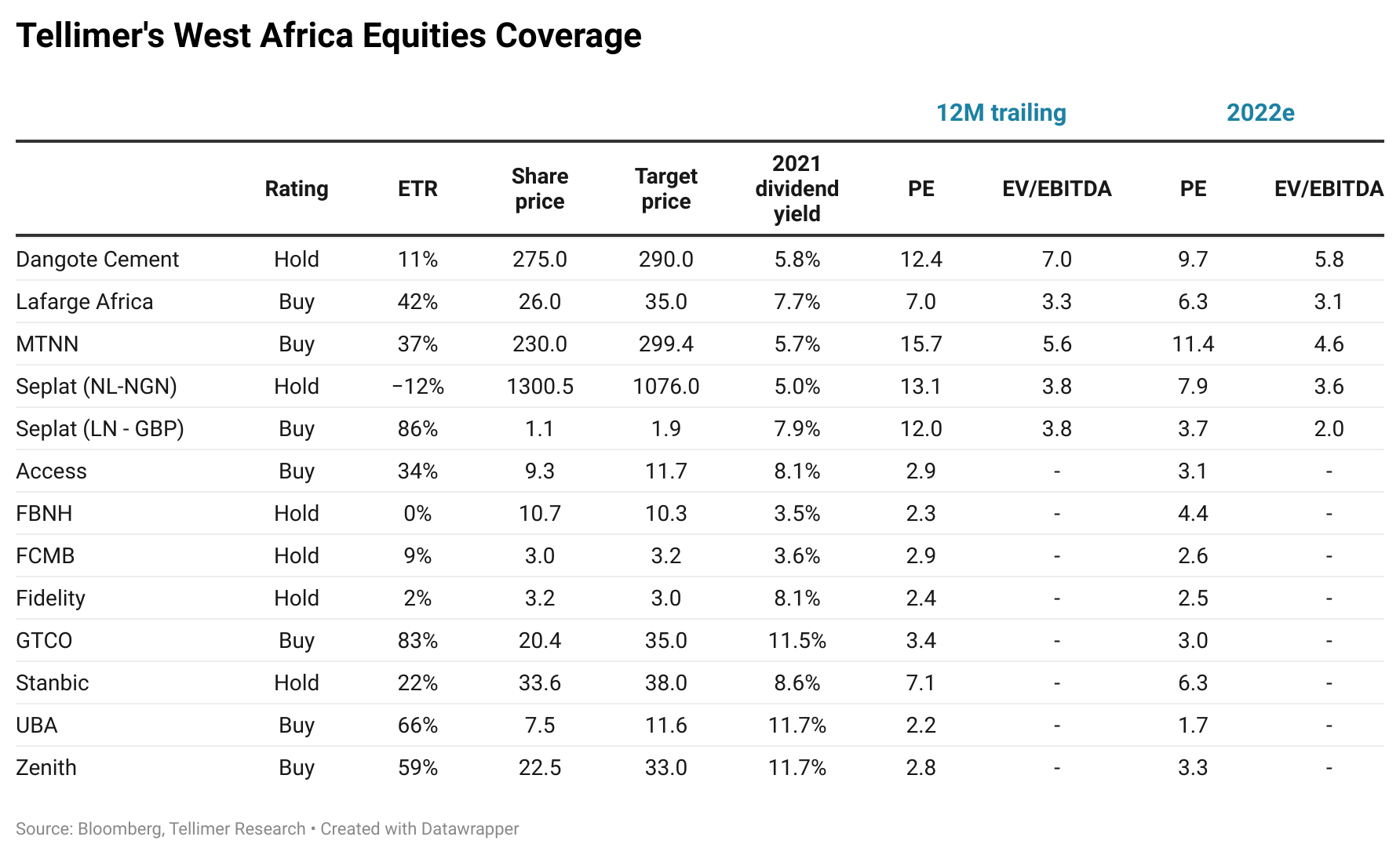 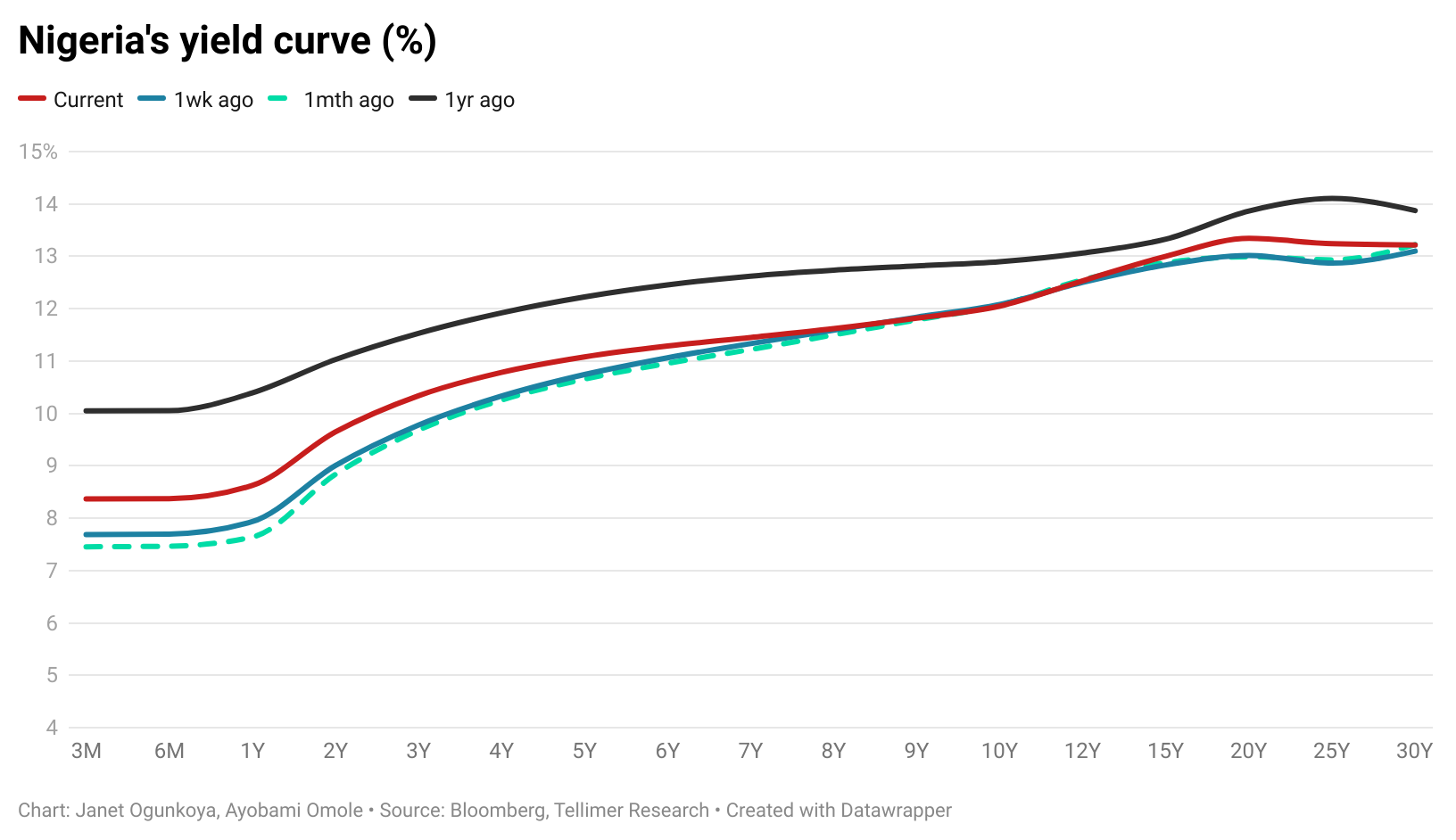 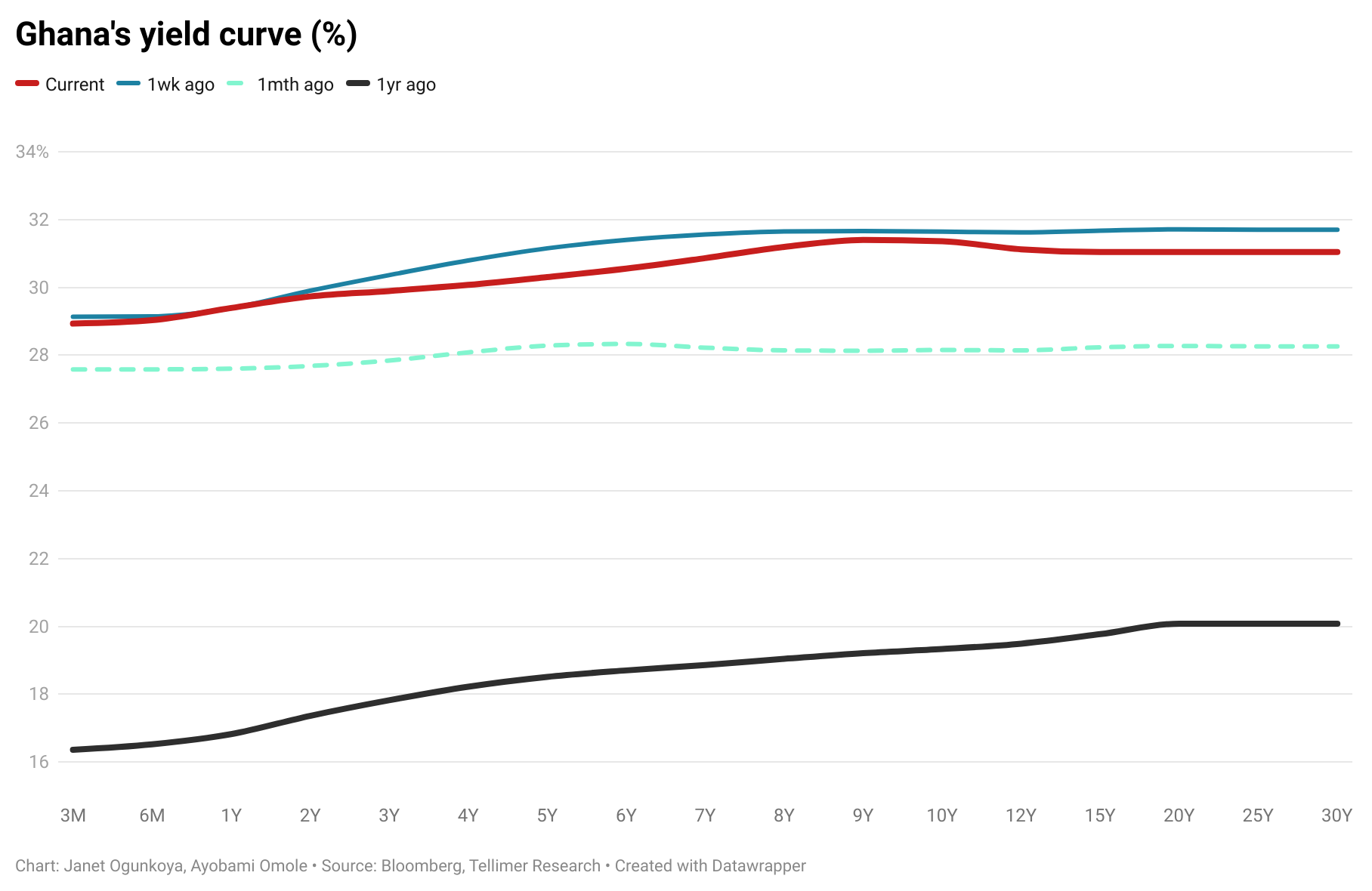