Welcome to the metaverse – the next frontier in tech investing

Last month, I played a virtual reality (VR) game for the first time. I assumed the identity of a space traveller surfing the moon. It was exhilarating and the graphic interface was incredibly vivid and realistic.

It was strangely similar to my first encounter with the world wide web in 1995. The internet had existed in embryonic form since the 1970s. Some universities and a few companies had access to it. But it was only through the onset of the world wide web that it become common.

The first web encounter was addictive. The ease of surfing the web was hard to beat and was unlike anything that had come before.

My first metaverse experience was similar in that it is so hard to describe to somebody who has not been on it. It takes the user into a world that one has not been in before.

As with the internet in 1995, the bare bones of the metaverse have existed for a while, with the Oculus and VR games having been around for almost a decade. However, it may be about to go mainstream in much the same way as the world wide web did a generation ago. Facebook's decision to reorient itself as Meta suggests it thinks so.

What is the metaverse?

The metaverse is a three-dimensional digital sphere. It is immersive and usable in real-time. Users can access it to shop, socialise and study.

We present a brief summary of the key players in the metaverse economy below: 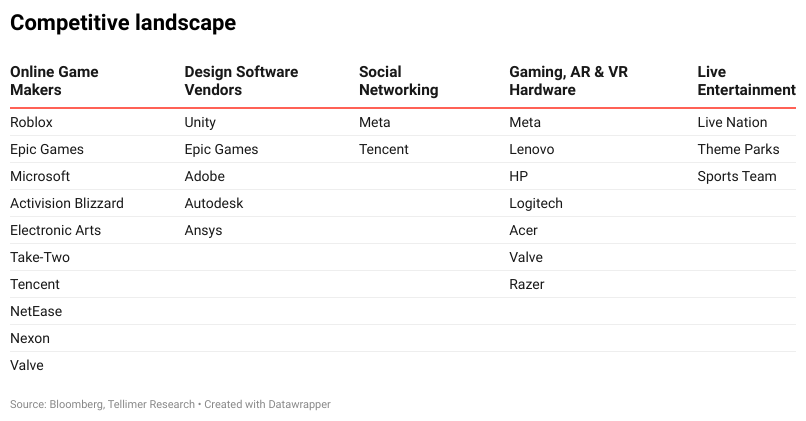 The metaverse market size was estimated at US$479bn in 2020, according to IDC, an industry intelligence firm. This includes the sale of metaverse equipment, video games and social media advertising revenue.

According to IDC, the scale of the metaverse market is expected to increase to US$783bn by 2024, driven by the following: 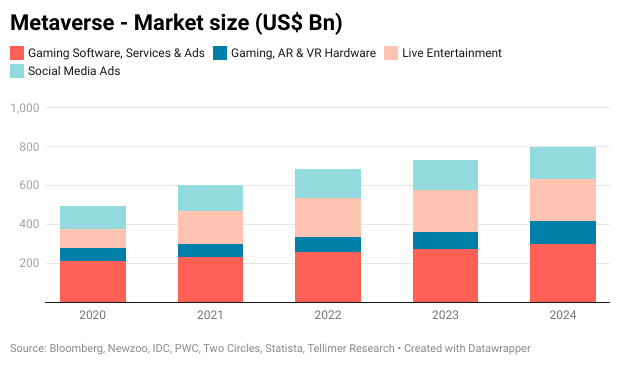 How to invest in the metaverse?

Investors can approach this secular trend from many different directions. Consider the following non-exhaustive list of potential layers to the metaverse:

Meta Platforms was formally known as Facebook. It has rebranded to bring the metaverse to the attention of investors. Advertising revenue from Facebook and Instagram still dominates the company’s revenue.

Meta Platforms has a business division called Reality Labs. This division sells hardware devices and VR content. The Oculus VR headsets are the world’s leading VR headsets and the company could invest over US$12bn in augmented reality and VR applications in the next five years.

Unity Software (NYSE:U) is the frontrunner in the 3D software space. More than 55% of 3D content is produced through its software. Unity has two key products that are offered free to content creators – Unity Personal and Unity Student. Both products could generate subscription revenue when the content creators increase the scale of their operations.

Nvidia (NASDAQ:NVDA) could also benefit from 3D content creation. Nvidia’s graphics processing unit (GPU) is the core of its revenue. The GPUs provide an immersive 3D content experience. It has a platform called Omniverse Enterprise that was only launched in late 2021, but has already attracted almost 100,000 content creators.

Roblox (NYSE:RBLX) is a dominant player in the gaming world. The company has stolen a march over others in creating a metaverse platform. Roblox has hosted virtual events where rock stars have featured. It has 54mn daily users, most of whom are below 13 years of age, and is in pole position to benefit from the metaverse boom.

Cloudfare (NYSE:NET) is a leading content delivery network (CDN). It can deliver content in 50 milliseconds. Such speeds will be vital as the metaverse expands. The company also has a cybersecurity and data storage platform, which could meet the metaverse’s needs.