We prefer short-term bonds to capture impact of positive news

Short-dated spreads to narrow further but we advise caution. Ecuadoran bonds jumped 10% on average on 17 October on news that the government is weighing a debt buyback to be funded by a blue bond issuance guaranteed by the DFC and the partial agreement with the indigenous on fuel subsidies. This could cement an already more constructive outlook based on the financial relief obtained from debt negotiations with China. We were not surprised by the more positive price action since our view has been that Ecuadoran spreads were largely oversold. In spite of this, weaker prospects for oil warrants an increase of relative spreads relative to the depressed levels prevailing before the June protests. Going forward, we estimate that the government will likely need to introduce spending cuts to close the funding gap, even after accounting for potential savings from a buyback and additional multilateral financing. These fiscal efforts will likely be evidenced in the 2023 budget, to be submitted no later than 30 October, as the government is already forecasting Ecuadorean oil prices to fall 27% in 2023 to an average of USD65 per barrel. Bottom-line, we think that the buyback will allow mostly for spread compression in the short-end, allowing for a moderation of the negative slope of the Ecuadoran yield curve. Nevertheless, being a high-beta credit Ecuador remains extremely exposed to a new bout of risk aversion in the event that markets embrace a high-for-longer interest rates scenario that we dubbed “stagflation scenario” in Macro and Strategy Update: To the tune of global factors, 05 September. In that case, recent and supportive domestic news might not suffice to compensate for heightened risk aversion. Consequently, in the medium term, the risk-reward is probably not that compelling given that the evidence for “stagflation” seems to be building up. We prefer short-dated notes (particularly the 5% 30s), where we target largest capital gains, but we are wary of adding duration.

Debt negotiations with China offset the fall in oil prices. Although we were expecting oil prices to fall (see To the tune of global factors), the prevailing uncertainty on the outlook for oil led us to shave our price assumptions aggressively. In our more downbeat scenario for oil prices (see Table 2) crude exports’ revenues were marked down by USD2.8bn in 2022-24 (cUSD950mn per year on average). Nevertheless, negotiations with Chinese banks reduced debt servicing by an average of USD0.4bn per year from 2022 until 2025. In sum, we estimate debt servicing until 2025 was reduced by USD1.7bn, USD1.1bn accounting for lower principal payments and USD0.6bn for lower interest payments (see Chart 1). Savings from lower principal payments were below the USD1.4bn headline in the government’s announcement on 19 September, as they excluded the cUSD270mn increase on principal payments in 2025 to the China Development Bank resulting from smoothing the debt profile. Although savings from negotiations were below our USD1.4bn estimates we forecasted in To the tune of global factors it represents a significant relief for Ecuador's finances as most savings concentrate in the short term. In fact, 2022 and 2023 savings from negotiations would almost offset the fall in oil revenues in those years, which would leave the short-term outlook relative unchanged compared to our previous estimates. 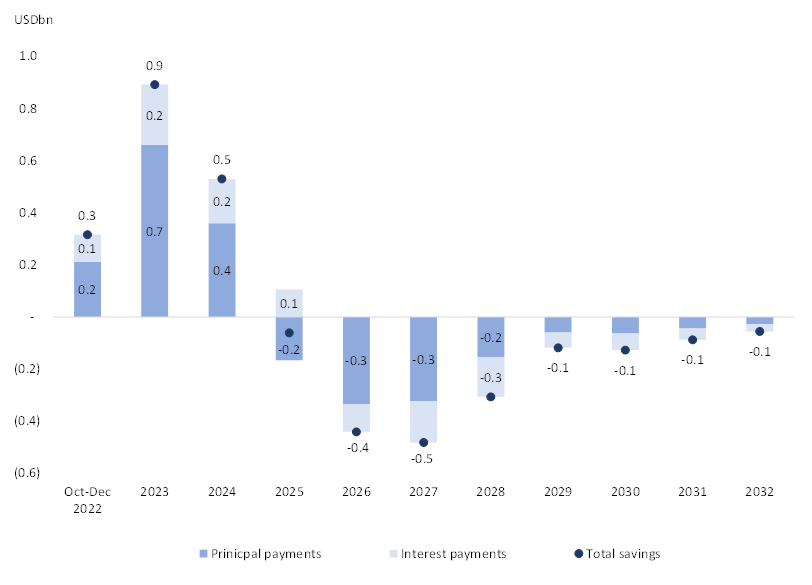 Source: BancTrust & Co. estimates based on Ecuador Ministry of Finance

Plans to issue a DFC-backed blue bond could provide additional relief. President Guillermo Lasso stated in a streamed interview on 12 October that he is mulling buying back international bonds with resources provided by the US International Development Finance Corporation (DFC). The DFC would lend Ecuador USD800mn to back a blue bond issuance that the government will use for the repurchase. The DFC’s loan would be conditioned on increasing spending to protect the Galapagos Marine reserve, according to Lasso. These statements were later supported by a Bloomberg story quoting Finance Minister Arosemena briefing investors in Washington about the buyback plan, and that they will announce the operation at the United Nations Climate Change Conference next month. Considering current valuations we estimated the government would attain higher savings by repurchasing the 5% 30s. In Table 1 we show the results of a comparative exercise where we reinvest all savings that would be attained from buying back all bonds at the forward rates that can be derived from Ecuador’s Sovereign yield curve. In addition, the 5% 30s would also maximise debt relief in the remainder of the Lasso administration. If the full USD800mn are used to repurchase the 5% 30s then debt servicing would decline by a cumulative USD240mn.

Table 1. Savings from the buyback

There is little room to avoid spending cuts. With the updated debt profile, that do not includes potential savings from a buyback, and new estimates of oil revenues, the cumulative financing gap for the 2023-24 period deteriorated slightly (see Table 2) despite higher savings that resulted from the revised fiscal statistics released in late September. As we explained in To the tune of global factors apart from reducing debt servicing through negotiations with China, the government could increase financing by USD1.6bn through the issuance of a USD0.6bn IADB-guaranteed bond and by tapping the IMF’s Resilience and Sustainability Trust for USD1bn. These additional sources would reduce the cumulative financing gap for 2023-24 to USD3.5bn from USD5.1bn, which suggests that more efforts will be required to close the gap. This would be also true if we account for potential savings we estimated from a potential buyback. The government already unveiled the oil price assumptions that will likely support the 2023 budget, roughly matching our own. Thus, we expect authorities to reduce capital spending in 2023 to scale back the gap in the budget bill draft that will be submitted no later than 30 October. 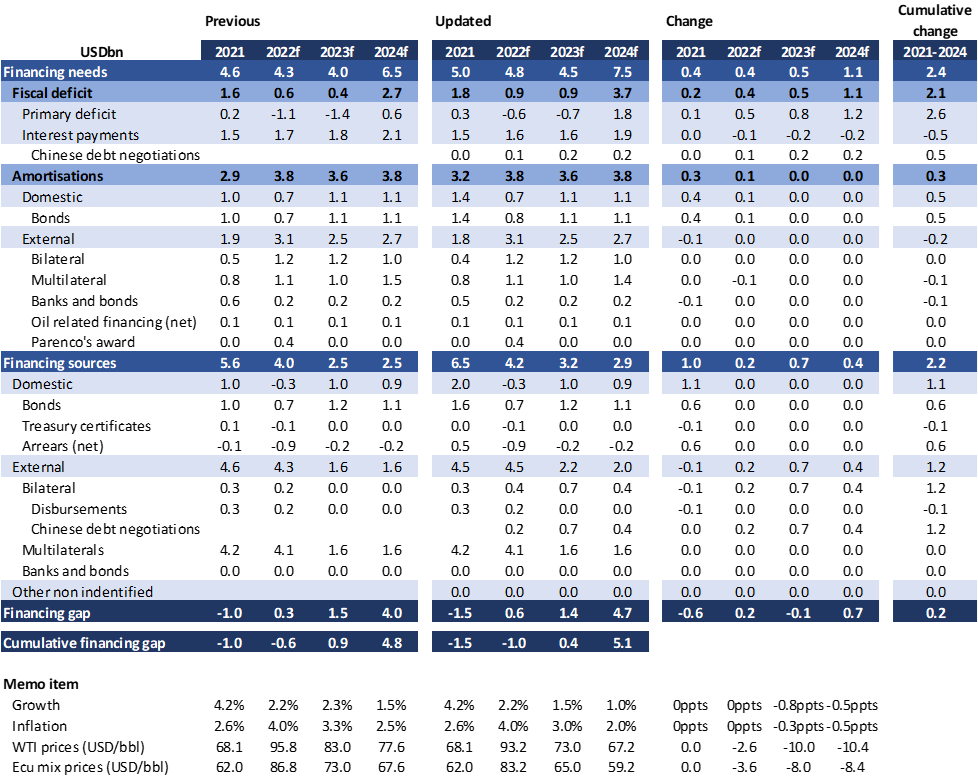 Source: BancTrust & Co. based on Ecuador Ministry of Finance

Negotiations with the indigenous have borne fruits. On 14 October the authorities reached 218 partial agreements with indigenous organisations on different topics related to price controls, financial relief, economic development, human rights, and natural resources, among others. Regarding fuel subsidies, the government refused to implement in “full” the indigenous’ proposal to localise fuel subsidies, by not accepting to eliminate the subsidies to fishing and power generation companies without including them in the negotiations first. Nevertheless, policymakers committed to implementing a mechanism to exclude wealthy populations based on the criteria consented with the indigenous groups, which would reduce the subsidy bill by USD550mn according to the indigenous’ estimates. These savings should be used to fund social spending on intercultural education, rural areas, urban slums and fighting malnutrition, therefore it is unlikely to translate into a lower deficit. Despite the indigenous arguing that progress was limited regarding their demands, we think that negotiations have reduced political tensions. To cement a sustained reduction in social conflictivity, it will be key that the government moves fast in terms of implementing the agreed measures. As a matter of fact, the indigenous warned they could resume mobilisations if they do not see actual results. In this regard, both parties would build new “tracking groups” to monitor the implementation of the measures, which will likely serve as input for the indigenous groups to make a comprehensive assessment in the Native Communities Federation (CONAIE) annual meeting to be held in November. On another note, authorities are also engaging in negotiations with opposition lawmakers and social movements, which could further reduce political uncertainty. According to National Assembly President Virgilio Saquicela, lawmakers of all the political caucuses have reached a consensus on 104 of 118 articles of a new investment reform proposal that was sent to President Lasso. President Lasso stated this new draft of the investment bill resembles the one that had been rebuffed by lawmakers in March 2022. This being said, Lasso has not shown optimism that legislators are actually willing to pass the reform.

Domestic fundamentals have improved but negative risk re-pricing could prevent spreads from narrowing. Current Ecuadoran spreads relative to EM surpass the levels before Guillermo Lasso was elected President on 11 April (see Chart 2). Back then, polls showed a tight race between Lasso and the correist candidate Andrés Arauz (see our Ecuador Economics & Strategy: Election preview: Tipping point, 07 April 2021). We believe that political risks back then were far more severe than those currently stemming from opposition lawmakers and indigenous movements. Furthermore, back then oil prices were significantly below current levels, making Ecuadorean bonds look oversold from a fundamental perspective. Therefore, Ecuadorean bonds would make a good overweight bid in a global risk-on scenario (see To the tune of global factors ) to materialise. But in a high-for-longer interest rates scenario (“stagflation”) the appetite for high beta credits such as Ecuador would be subject to a severe blow. In that case, recent and supportive domestic news might not suffice to compensate for increased risk aversion. Valuations seem enticing but risk is also high. We do not see a compelling risk-reward, particularly of long-dated notes, in an environment where the case for the “stagflation” scenario is building up. 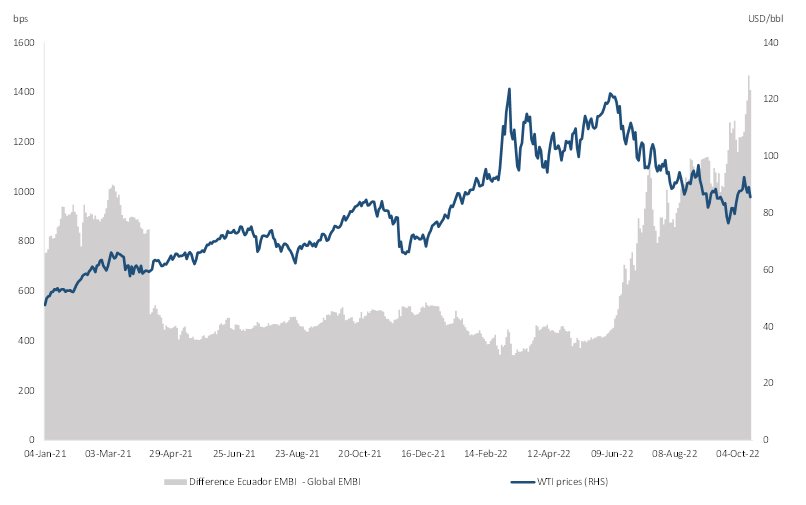 Source: BancTrust & Co. based on JPMorgan and Bloomberg