Wake-up call for the West: While Russia fights, China prepares for war

History doesn't repeat itself, but it often rhymes

In March 1936, Germany's army reoccupied the Rhineland region of Western Germany. The Rhineland had been demilitarised under the Treaty of Versailles in 1919, to create a buffer region between Germany and France in the aftermath of the Great War of 1914-18. For Nazi Germany in March 1936, the "retaking" of the Rhineland was a hugely symbolic event, and its relative lack of reaction from other powers emboldened the German Chancellor Adolf Hitler whose armies moved on to invade Czechoslovakia almost exactly three years later, setting the world ablaze in another global conflagration.

However, as the Great War illustrated, it takes more than one event, one leader or one country to create a World War – it tends to be a culmination of multiple factors that cause the worst outcomes. A year after German troops reoccupied the Rhineland, Japan mounted an invasion on a politically divided China. Japanese imperial troops encountered the fractured forces of the nationalist Kuomintang and the insurgent Communist Party, which (temporarily) allied to resist it, in a conflict against Japan that raged from 1937 to 1945.

The temptation is to be mesmerised by Russia and its invasion of Ukraine – a country divided by an 8-year civil war and run by (at the time) an unpopular government – but it is also worth thinking further East to other apparently disconnected events, that make the global situation more uncertain than just the direct byproducts of the first "tank war" in Europe since 1945.

Now it is Russia, rather than Germany, taking on unfinished business on its Western flank in Europe, and it appears China, rather than Japan, is intent on dominating the East China Sea. It has unhappy echoes of the late 1930s.

Taiwan (the Island of Formosa) had been under Chinese imperial control since the 17th Century. It was ceded by Imperial China to the Empire of Japan under the Treaty of Shimonoseki after the first Sino-Japanese War in 1895: a strategic by-product of Japan's invasion of the Korean peninsular. This added to the pressures on the imperial Qing Dynasty of China, which had, in prior decades, already suffered the humiliations of losing both Opium Wars (1839-42 and 1856-60) and control of Hong Kong (ceded by the Qing to the British in 1841). By the time the Qing administration had been further knocked by territorial losses to Imperial Russia in the Sino-Russian War of 1904-05, the light was fading on centuries of imperial rule. Despite belated attempts at reform, the Qing Dynasty and the imperial throne itself was deposed by a revolution in 1911, resulting in the abdication of the last Emperor Puyi, and the creation of the Republic of China.

It was this Republic of China that was riven by internal divisions when Japan attacked in 1937. The mainstream Kuomintang (KMT) and revolutionary Chinese Communists (CCP) had been fighting each other since 1927 but allied – not always coherently – to resist the Japanese invasion. Global power politics played a hand, and the KMT was backed by the US and the CCP by the Soviet Union. The CCP tended to be more successful in their military operations than the KMT, and when the Japanese surrendered to the Western Allies in late 1945, the friction between the two groups reignited in violence. After several more years of conflict in which the KMT suffered a series of reverses, the group and its leader Chiang Kai-shek escaped to Formosa (Taiwan) in 1949, leaving mainland China to the victorious CCP.

Despite the warm rhetoric of the US and others, the ROC is diplomatically recognised by only a handful of countries (14 to be exact, mainly in the Caribbean and Latin America, but also including the Embassy of the Holy See – the Vatican; compared with the 172 foreign embassies hosted by the PRC). The US continued to recognise the ROC in Taiwan until 1979 and then cut its formal recognition in favour of the PRC on the mainland, and now has no formal diplomatic relations with the ROC.

The US may not have an embassy but it does have a significant presence in the form of the American Institute in Taiwan, a unique body mandated by the Taiwan Relations Act of 1979; a "strategic ambiguity" that is more complex and subtle than the foreign policy stance of the Pope, it would seem.

However, Taiwan is the US' eighth-largest trading partner, a globally important manufacturer of microchips, and the US is Taiwan's second-largest trading partner (ironically after the PRC, which is its largest). With this background in mind, the visit of House of Representatives Speaker, Nancy Pelosi to Taiwan recently was strange for at least three reasons:

The Speaker has therefore ignited more tension between the US and PRC – one must assume deliberately – but it is not clear for what strategic purpose. The PRC responded in predictable manner, by increasing the number of its military air sorties into or near ROC airspace. It also engaged in a new escalation by commencing a series of live-fire exercises in the waters around Taiwan itself. 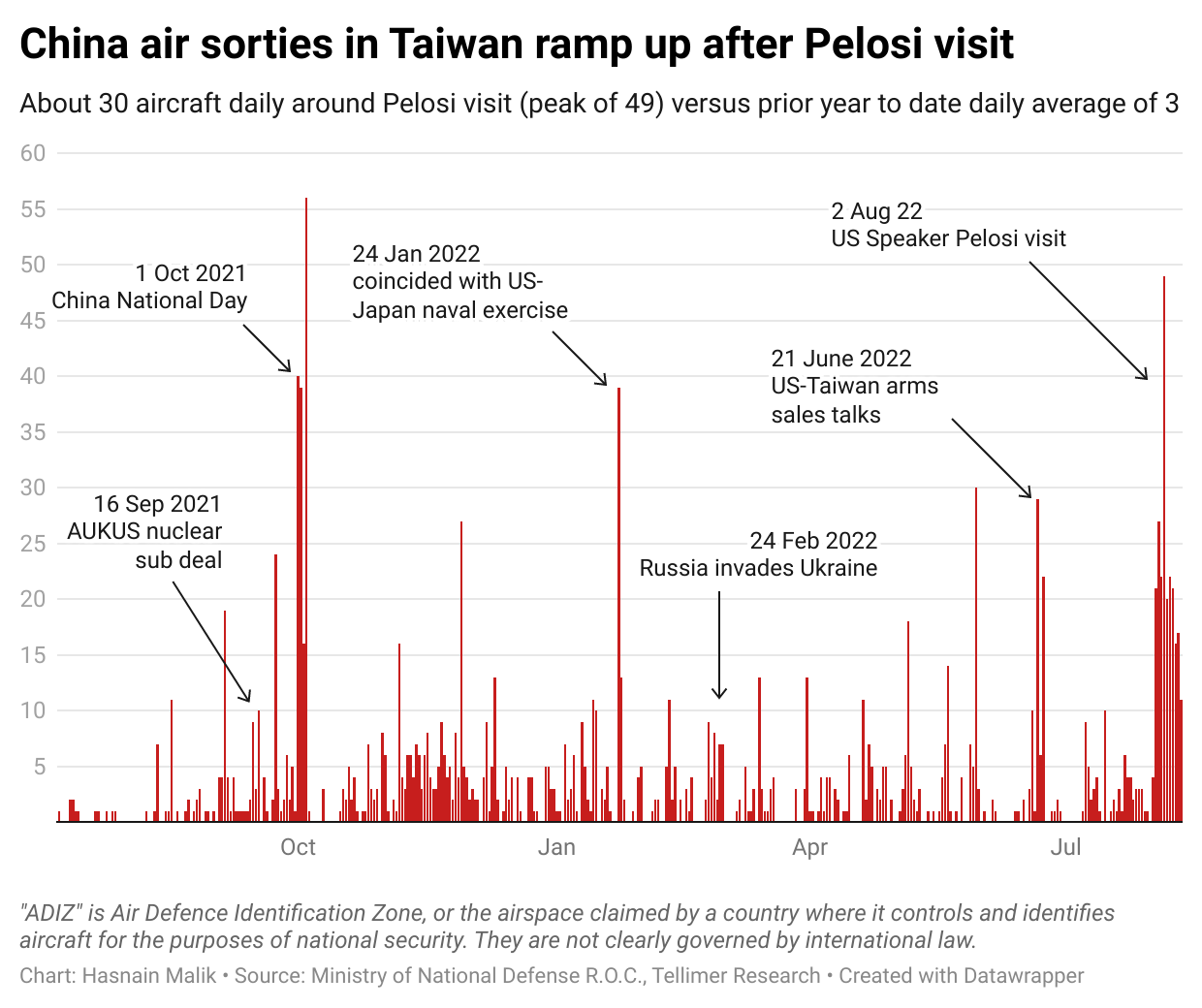 The PRC arms itself

The PRC exercises around Taiwan resulting from Pelosi's visit differ in nature from the type of exercises that have gone before:

Meanwhile, the PRC has increased its defense budget by 7.1% this year to CNY1.45tn (US$230bn), despite its economy being under pressure from "zero-Covid" lockdowns, reduced domestic demand and some food inflation (2-6% depending on the food – still modest compared with the inflation seen in G7 economies). This is still dwarfed by US defense spending of cUS$700bn. However, in context, the Chinese defense budget has more than doubled in the last decade.

The creation of AUKUS and Japan rearms

In September 2021, the governments of Australia, the UK and the US announced the creation of an "enhanced trilateral security partnership called AUKUS" much to the chagrin of the other economically powerful country with a large defence industry and historic ties to the Indo-Pacific region, France. The military pact is more like a series of agreements starting with the US and UK helping develop nuclear-powered submarine capability for Australia, and collaborating on a number of other security-related capabilities, including cyber, AI, quantum computing and "additional undersea capabilities" (which is likely to be a euphemism for undersea drones or Unmanned Underwater Vehicles – UUVs). 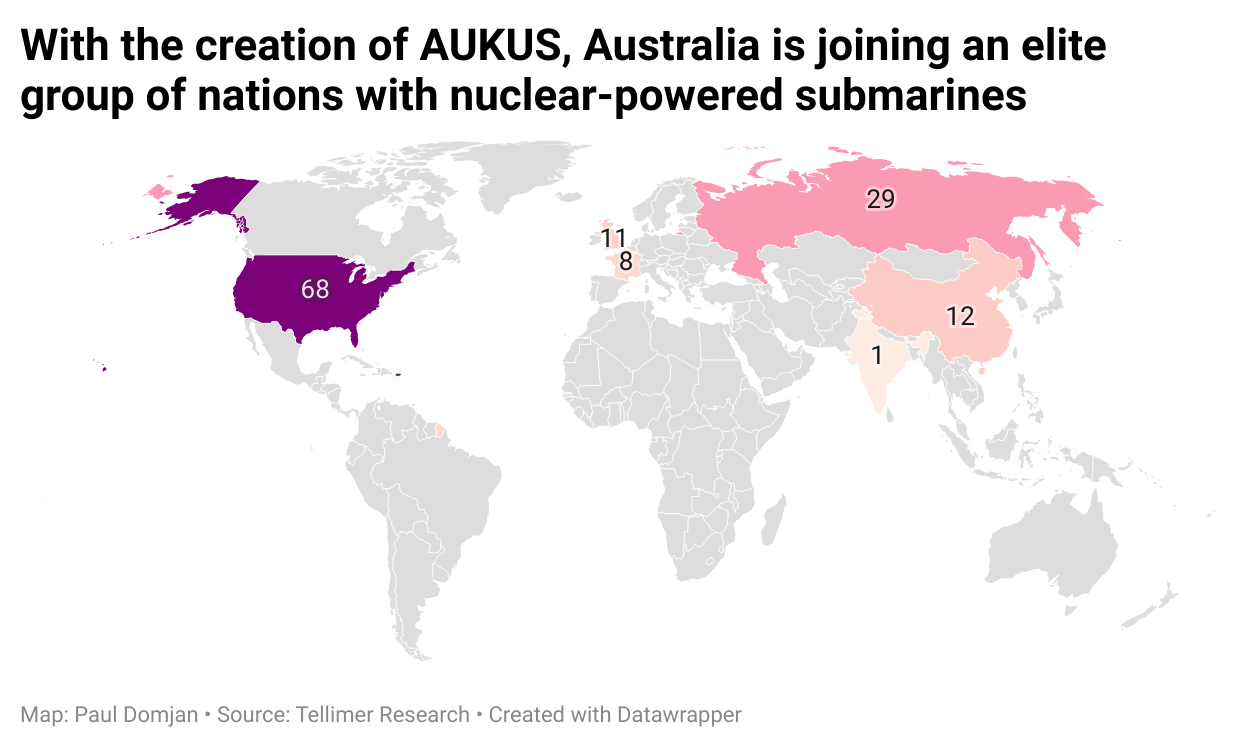 In Japan, the late Shinzo Abe – the former Prime Minister who was so tragically assassinated on 8 July – had been urging for rearmament as a priority, in a rejection of the constitutionally imposed pacifism since the Second World War. His quiet urging ultimately led to Japan converting helicopter carriers to fully fledged aircraft carriers, and in October 2021, two locally stationed US Marine Corps F-35B's stealth fighters landed on the deck of JS Izumo, the first operational aircraft carrier Japan has had since 1945.

The largest permanent overseas military presence the US has is in Japan; as it nearly invariably has been since 1945. More than 55,000 military personnel occupy around 120 bases throughout Japan's islands, including a large part of Okinawa. The US has another 26,000 troops stationed in South Korea. As I write this, the USS Ronald Reagan carrier strike group is bobbing about on the South China Sea: the USS Ronald Reagan is a Nimitz class nuclear powered super-carrier accompanied by the cruiser USS Antietam and destroyer USS Higgins and – one would have to assume – one or two nuclear-powered submarines, lurking darkly beneath the surface, listening...

With war in Europe and military rearmament in East Asia, Western politicians – distracted by inflation and domestic issues – should have a more strategic eye on the risks of an increasingly confident PRC and an increasingly frustrated Russia.

As slowness to build military capability and strong diplomatic relationships proved in the 1930s, mistakes now will prove costly in years to come.

This "Perspective Pool" report was first published on Scriber – the publishing, analytics, and subscription management tool for investment professionals.