Vietnam has been our top strategy pick for many years now and, in all honesty, this has been a consensus view among frontier-focused investors for only a fractionally shorter time. Much more recently, the few mainstream emerging market investors willing to venture into smaller markets have joined in.

This is partly reflected in and partly helped by the explosion of average daily value traded to about US$850mn so far this year, which is 3x higher than H2 20 and 6.5x higher than in H2 19.

Vietnam equities are performing well and remain reasonably attractively valued, relative to history. The Ho Chi Minh index is up 60% in US$ total return terms over the last year and up 25% year to date. Forward PB of 2.7x and PE of 16.4x are at 8% and 3% premiums to respective 5-year medians. (But note that, from an absolute valuation perspective, not a single one of the main MSCI Vietnam constituents exhibits any two of the following trailing metrics on our stock screen; PB below 1.5x, PE below 15x, DY above 3%).

The investment case has everything: growth driven by manufacturing and commodity exports, domestic consumption and infrastructure, as well as low risk on both the currency and political fronts.

However, the problem of restrictive foreign ownership limits in listed equities reduces this high conviction country view into a rather watered-down and unsatisfactory equity strategy view to merely hold on to existing holdings in the better quality companies (defined as those with relatively understandable business models and ultimate ownership, and transparent communication) and to wait for new listings that are attractively priced.

The catalyst for the last round of reform, including more liberal foreign ownership, the establishment of free zones for manufacturing and the clean up of the banking system, was the global financial crisis in 2007-08, which ultimately exposed a chronic level of debt in state-owned enterprises and banks (with underlying non-performing loans peaking near 20%) and unsustainably high fiscal deficits (in the range of 6-7% over 2012-14 while real GDP growth was 5-6%).

Ironically, Vietnam's highly effective management of the Covid crisis and its pole position in taking advantage of US-China friction (ie the move to "China plus one" in manufacturing) has meant that there has been no repeat of the pressure to accelerate reforms this time round (fiscal deficits are about 4%, growth is about 7%, and underlying banking NPLs are below 5%).

The Vietnam investment case has pretty much everything (apart from democracy and press freedom for those driven by sovereign ESG):

The investment risks are the following:

However, the key problems with translating this top-down nirvana into an equity strategy all stem from low free floats and low foreign ownership limits – we estimate merely 23% of MSCI Vietnam is accessible for fresh capital from foreign investors (on the basis of free float left before foreign ownership limit is reached in the individual constituents of the index).

An excel version of the stock screen below can be downloaded via this link. 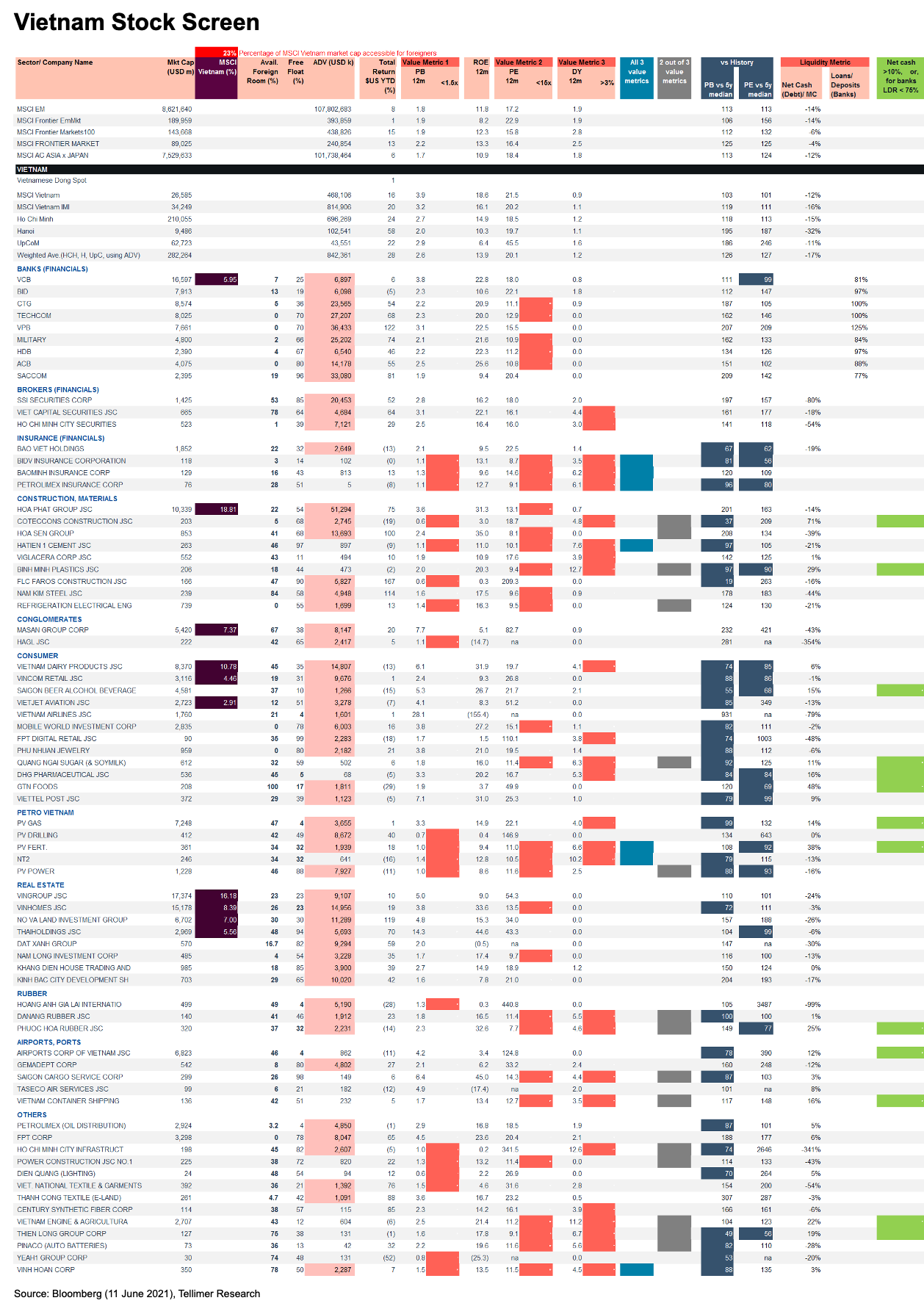 Vietnam lockdown eases, now for the next test

Press freedom a black ESG mark for China and Vietnam

Military spend is immune from Covid

Vietnam: No punitive US tariffs despite currency manipulator label