Succession to the Communist Party General Secretary Nguyen Phu Trong should not alter the broadly positive top-down, long-term investment case in Vietnam equities. We expect any new leader to maintain Vietnam's current economic and foreign policy mix. However, given the positive consensus on Vietnam that prevails among foreign investors, it is worth highlighting the risk of further delays in decision-making (particularly on state-owned enterprise reform, land development permits and foreign ownership liberalisation) and unpredictable anti-corruption scandals that might result from a potential succession struggle. 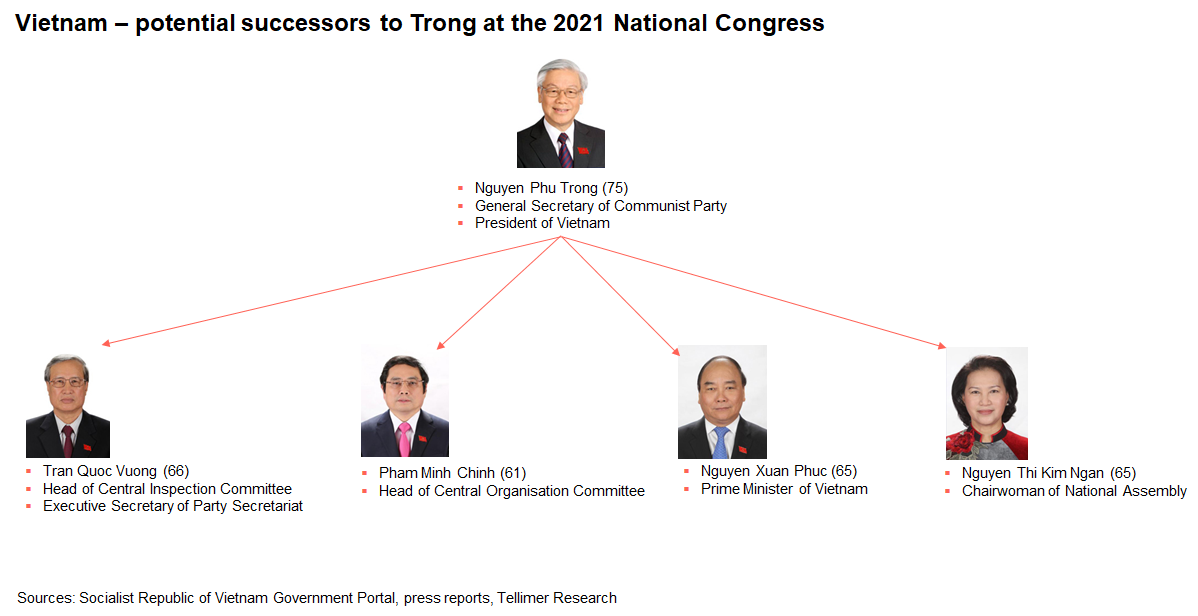 The Vietnam Communist Party delegates gather every five years at the National Congress to elect the Central Committee which, in turn, elects the Politburo and the General Secretary (Party Leader). The last Congress was in January 2016 and the next one is due in 2021. Nguyen Phu Trong (aged 75) is President of Vietnam (since October 2018) and General Secretary of the Communist Party (since January 2011).

Although the broad thrust of Vietnam’s policy mix is unlikely to change, succession comes in a sensitive context:

1) There are succession candidates often mentioned in external press speculation (illustrated above), but none of them meet all of the traditional criteria for the General Secretary role: two terms as a Politburo member, hails from northern Vietnam, has a track record in a senior party or military post, and is below the age of 65. Each of the most mentioned potential successors fails to check at least one of these boxes:

2) Trong’s own poor health may reduce his ability to smooth succession by using his political clout. For example, his initiative of confirming a list of 200 party members, considered a “strategic cadre” of candidates for the next party central committee, has not been finalised. He reportedly suffered a bout of serious illness in April 2019 and did not travel to the UN General Assembly in September 2019, although he made the closing speech at the party central committee meeting in October 2019 and made a public speech in advance of the Tet holiday in January 2020.

3) The anti-corruption campaign under Trong has likely increased the division within the party between those who supported Trong’s campaign for re-election as Party Leader at the January 2016 National Congress and those who favoured his rival at the time, former Prime Minister Nguyen Tan Dung. In our view, Trong represented northern Vietnam and the more economically conservative strand within the Communist party, compared with Dung, who represented southern Vietnam and the more economically reformist strand. One of Trong’s potential successors is Tran Quoc Vuang, who has spearheaded the anti-corruption campaign.

4) Trong has, since 2018, filled both the role of Party Leader and President in an unusual break from the “four-pillar” separation of powers between the Party Leader, Prime Minister, President and head of the national assembly. Part of the succession process in the next year will involve whether to again separate the roles of the Party Leader and the President. Although Trong has emphasised a shift to more collective decision making in his second term (since January 2016), despite his assumption of the Presidency, there may be not be sufficient safeguards (in the eyes of losing candidates in the succession) against a personalised and centralised decision-making model (along the lines of President Xi Jinping of China) being pursued by his successor.

5) Over half of the party Politburo (which implements policy resolutions passed at the five-yearly party congress and from which the Party Leader is selected) is over the age of 65, which is meant to be the age of retirement.

6) Although Vietnam has enjoyed an enviable combination of high growth and low inflation in recent years, there are significant challenges ahead: an ageing population, a lack of localisation in the inputs imported by foreign-owned firms that drive manufacturing exports, state-owned enterprise reform, liberalisation of foreign ownership (to enable more efficient price discovery and deepen equity capital markets, to facilitate capital injections into the banking system and to drive skills transfer) and simmering territorial competition with China in the East Sea (which matters for securing long-term oil and gas supply).

The long-term development strategy is not up for debate, merely the pace of implementing it. The four pillars of Vietnam's development story since the initiation of economic reform from communism to state-capitalism in 1986 (Doi Moi Policy) are as follows, and, ultimately, we expect any successor to Trong to adhere to these pillars:

The main downside risk is of a near-term slowdown in government decision-making, something that would compound the delays resulting from the more intense anti-corruption drive in Trong's second term – see Vietnam: Still high growth, low accessibility (11 April 2019).

Vietnam equity performance muted in the past year, foreign inaccessibility is a constraint

Vietnam equities are up 11% in the past 12 months in US$ total return terms, measured by the weighted average of the Ho Chi Minh, Hanoi and UpCoM local indices. The larger-cap biased MSCI Vietnam index is up merely 5%. This compares with MSCI EM and FM up 10% and 14%, respectively.

Foreign ownership limits remain a constraint on equity performance: the premia, in practice, of 20 to 50% to build a position with fresh foreign capital, inhibits the upwards re-rating of stocks with strong fundamentals. Merely c20% of the market capitalisation of the MSCI Vietnam index is accessible for new investment by foreigners.

For analysis on stocks and sectors in Vietnam see Vietnam 2020 Investment Strategy, 31 December 2019. 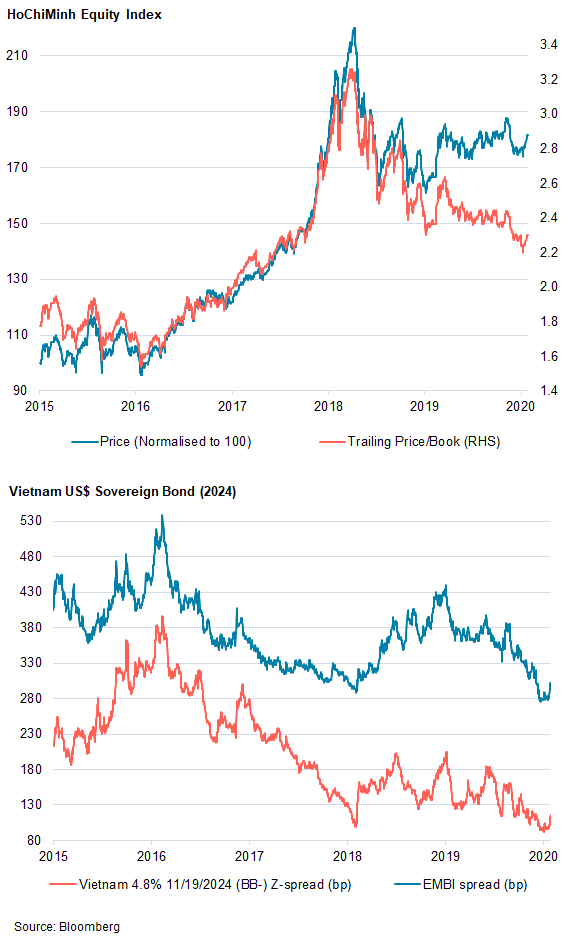 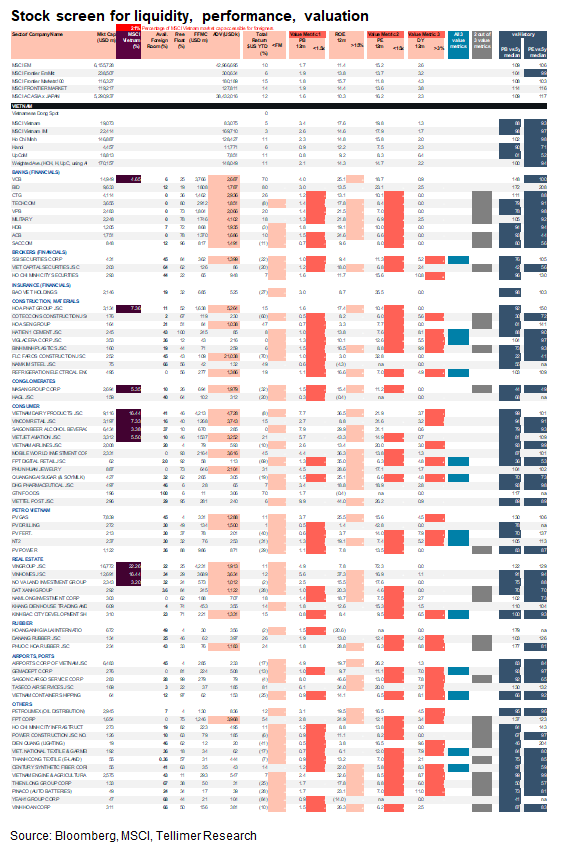