In our recent report we surveyed over 30 emerging markets to identify where the scope for boosting financial inclusion appears greatest. We then created our Fintech Financial Inclusion Scorecard to rank the countries.

Based on our methodology, Vietnam ranks as the emerging market where fintechs could have the biggest positive impact on financial inclusion.

The country has a tech-savvy population that benefits from high mobile phone and internet penetration, with affordable data access. However, rates of financial inclusion are currently poor, with below-average bank account penetration and limited access to bank branches and ATMs.

For these reasons, Vietnam remains a predominately cash-based economy. Even for online purchases, c90% are settled through cash on delivery, the highest proportion within Southeast Asia. We think there is substantial scope to convert the bulk of these cash transactions into digital payments. The government is also supporting the shift towards electronic payment media; eg the State Bank of Vietnam has (at least temporarily) dropped its proposed 49% foreign ownership cap on e-payment companies.

Vietnam, like other emerging markets, has experienced strong growth in digital payments during the pandemic; the country’s largest mobile wallet company, MoMo, saw its users doubling from 10mn to 20mn during 2020. The fintech ecosystem has grown strongly in past few years; there were 123 active fintechs in 2020 compared with just 44 in 2017 (source: fintechnews.sg). Payments firms (39%) are the most active choice for entrepreneurs, followed by lending (24%) and blockchain (13%). 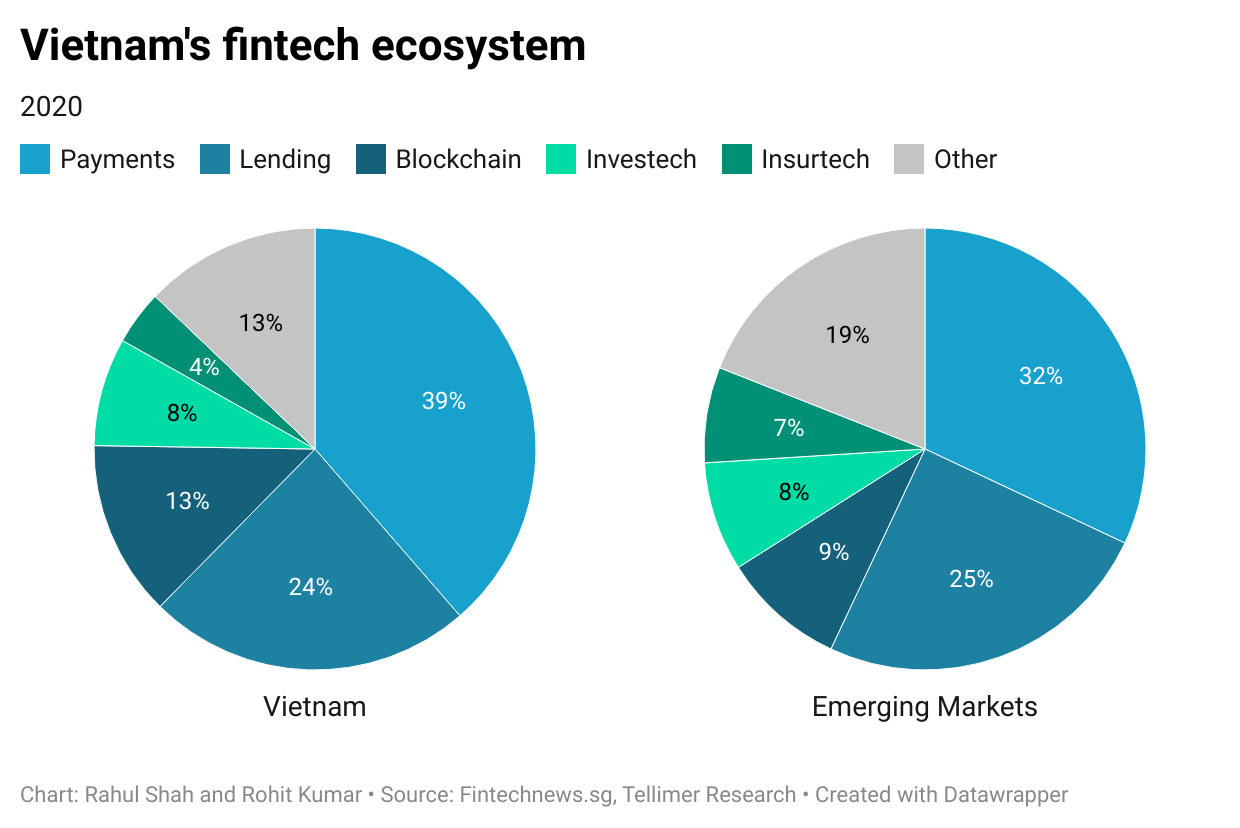 MoMo is Vietnam’s biggest e-wallet company, with over 20mn mobile wallets; it aims to reach 50mn by 2023. It processes cUS$14bn in annual transaction value. MoMo began as a person-to-person (P2P) payments company via a mobile wallet app but has since expanded its offering into airtime top-ups, bill payments and merchant payments, with c100,000 payment points nationwide. It has also built a credit-scoring system that could allow it to expand into digital lending. Its investors include Standard Chartered, Goldman Sachs and Warburg Pincus. The company has announced that it plans to list its shares by 2025.

Nextpay is the product of a merger between e-wallet service provider Vimo and point-of-sale startup mPOS, both of which were founded in 2014 by the incubator NextTech. Nextpay provides exposure to both the payments infrastructure opportunity in Vietnam (over 40,000 POS deployed) and a consumer-oriented mobile wallet business (1.5mn wallet users in 2019). Nextpay plans to expand to Indonesia and Myanmar, and is looking to list by 2022.

Zalopay launched in 2017 and is a mobile payment app that sits within Zalo. Since its introduction in 2012, Zalo has become the most popular messenger app in Vietnam, with more than 100mn users worldwide (in 2019). This close linkage gives ZaloPay a big advantage over its competitors. We think Zalopay can mimic the success of WeChat Pay in China, which operates on a similar model. As per Cimigo, Zalopay is one of the country’s three most popular e-wallets, accounting for 90% of the market (the others being MoMo and Moca).