5 May 2019
Published by
Tellimer Research

Vietnam: Succession risks more delays, not a change of course

Concerns over the health of President Trong should not alter the broadly positive top-down, long-term investment case in Vietnam equities. However, given the positive consensus on Vietnam that prevails among foreign investors, it is worth highlighting the risks that result from a potential succession. We expect any new leader to maintain Vietnam's current economic and foreign policy mix.

Succession risk is also diluted by the much less centralised and individual-centric model of political leadership that prevails in Vietnam compared to China. The main downside risk is of a near-term slowdown in government decision-making, something which would compound the delays we already hear about as a result of the anti-corruption drive – see our recent report, Vietnam: Still high growth, low accessibility (11 April 2019).

Nguyen Phu Trong (aged 75) is President of Vietnam (since October 2018) and General Secretary of the Communist Party (since January 2011). The President's last public appearance was on 14 April, a foreign ministry spokesperson acknowledged his health was inhibiting the conduct of normal duties on 25 April and he was absent from the funeral of one his predecessors on 3 May. Discussion of his health has occurred mainly on domestic social media and foreign media, not on domestic state media.

Issues related to the succession to Trong were likely to occur around the 2021 Vietnam Communist Party National Congress in any event. The succession to Trong likely prompts a new round of competition within the party between differing views on the leadership model, the pace of economic reform and the pursuit of anti-corruption.

(1) Party leader – Vietnam Communist Party delegates gather every five years at the National Congress to elect the Central Committee, which, in turn, elects the Politburo and the General Secretary (party leader). The last Congress was in January 2016 and the next one is due in 2021. Trong is in his second consecutive 5-year term as party leader and he may be considered too old to retain the position in 2021 (by which time he would be 77). He would have to satisfy the condition of "good health", and he would have to overcome the historic norm of a two-term limit.

(2) Collective leadership – Vietnam's political leadership is based on the principle of collective leadership between the party leader, the president, the prime minister and the leader of the national assembly, with the party leader enjoying the most senior role. It is generally less centralised and less based on an individual compared to China, under Xi Jinping. However, in recent years the gap in the model of leadership has narrowed: Trong is both party leader and president (even though the latter role is largely ceremonial, this combination of roles has not been since 1960, when President Ho Chi Minh relinquished his role as party leader).

(4) Anti-corruption agenda – Trong, similar to Xi in China, has pursued anti-corruption as a means to cement his following among the party faithful, increase his popularity among the mass population and to erode the power base of rivals within the party.

There is no clear successor to Trong and the main risk is that an early succession process slows down government decision-making in the near-term (thereby compounding existing delays resulting from the ongoing anti-corruption drive).

Historically, the party leader usually has two terms as a Politburo member, hails from northern Vietnam, has a track record in a senior party or military post and is below the age of 65. Each of the potential successors fails to check at least one of these boxes: e.g. the lead anti-corruption enforcer, Tran Quoc Vuong (66), lacks those party leadership credentials; the prime minister, Nguyen Xuan Phuc (64), is from southern Vietnam; and the Central Committee head, Pham Minh Chinh (60), is only into his first Politburo term.

The long-term development strategy is not up for debate, merely the pace of implementing it. The four pillars of Vietnam's development story since the initiation of economic reform from communism to state-capitalism in 1986 (Doi Moi Policy) are as follows, and, ultimately, we expect any successor to Trong to adhere to these pillars:

(2) Balancing geopolitical relations between China (investment and supply chain links) and the US (defence cooperation);

(3) Pursuit of free-trade agreements to drive manufacturing export-led growth; and

(4) Maintenance of the one-party state in domestic politics.

Vietnam equities are up 8% ytd in US$ total return terms, measured by the weighted average of the Ho Chi Minh, Hanoi and UpCoM indices. The larger-cap biased MSCI Vietnam index is up 13%. This compares to MSCI EM and FM up 13% and 9%, respectively. The weighted average of local indices is valued on trailing PB of 2.2x (an 18% premium to the 5-year median) and PE of 15x (on par with the 5-year median). MSCI Vietnam is on a 40% and 10% premia to 5-year median trailing PB and PE, respectively. These higher premia for MSCI Vietnam are driven mainly by Vingroup in conglomerates and VCB in banks.

Equities and Sovereign US$ Bonds: Performance and valuation 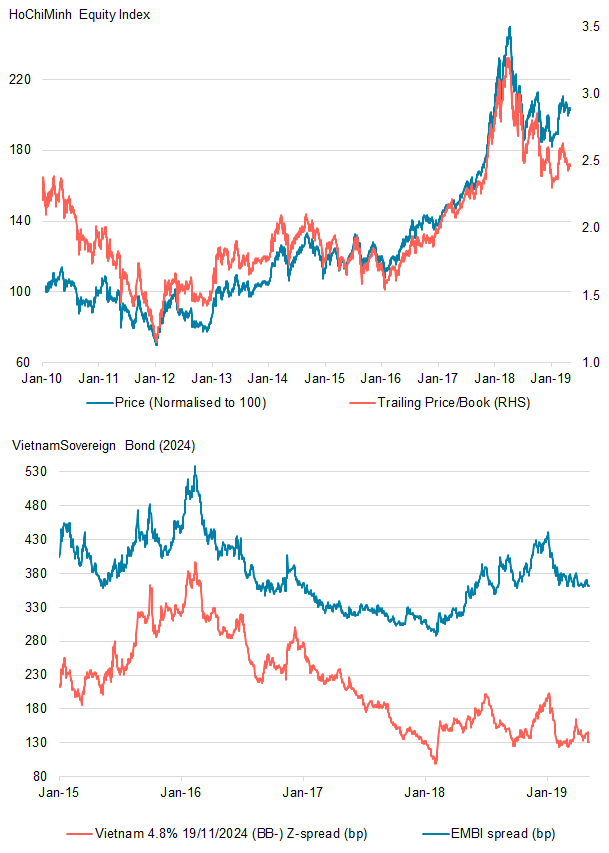