Vietnam Energy: As demand soars, solar can shine with the right policies

Vietnam has issued a new policy to promote the development of solar power projects, commonly known as Decision 13, effective 22 May 2020. While this ends ten months of policy uncertainty, the new feed-in tariffs (FiTs) will only be able to achieve so much by 31 December 2020 (when the policy expires). Other than a handful of international players such as Thai-listed B. Grimm Power and Singapore's Sunseap, most solar projects are owned by both unlisted and listed Vietnamese conglomerates (like Trungnam Group and Vinh Nha Trang Investment JSC). But with the right policies, this could soon change. In this note, we briefly discuss the new policy and highlight the opportunity size for renewable power capacity in Vietnam until 2030.

According to the Revised National Power Development Master Plan (March 2016), the country's renewable electricity (excluding hydro) should cover 7.5% of total generation by 2030. As a result, Vietnam's installed solar power capacity needs to reach 14GW by 2030 (currently 5GW) to meet this target, while the installed wind power capacity should reach 5GW (currently less than 1GW).

This will require an estimated investment of US$7.0bn and US$6.5bn in solar and wind projects, respectively, between 2020 and 2030. According to our estimates, both types of technologies could yield up to 14% US$-IRR over the 20-year project life.

Other than a handful of international players (including, but not limited to, Thai-listed B. Grimm Power and Singapore's Sunseap in solar, and Thai-listed Sun Energy and Belgium's Enfinity in wind), most of the projects are owned by both unlisted and listed Vietnamese conglomerates (like Trungnam Group and Vinh Nha Trang Investment JSC).

So far, international solar giants have shied away from investing in Vietnam due to its underdeveloped transmission lines which are owned and managed by the government. The overloaded grid (especially in the southern provinces) has wasted up to 40% of the new solar electricity generated, while developers have incurred losses. The government needs to adopt a take-or-pay model which will ensure predictable returns and make investment in solar projects more attractive. This, coupled with price-competitive auction schemes (expected from 1 January 2021), could be beneficial for the country's power supply.

Auction schemes will not only help reduce electricity prices, they will allow the government to manage the grid effectively (i.e. control when and where the solar power projects are installed) and also help drive out small-scale, speculative players from the market.

If Vietnam plays smart, it may replicate the record-low price of USc3.88/kWh in Southeast Asia achieved last year at neighbouring Cambodia's first solar auction, and invest the differential (i.e. USc3.21/kWh) to upgrade its transmission infrastructure. The most advisable action for investors is to wait for the take-or-pay, price-competitive auction in order to eliminate the risk of irregular off-take by the government resulting in lower-than-expected returns.

Lower and (still) uniform feed-in tariff (FiT) across the country...

In contrast to the previous flat tariff of USc9.35/kWh for all grid-connected solar power projects and the proposed FiTs (which were higher on average and categorised into four regions according to the levels of photovoltaic potential), the new tariffs are 10-24% lower (ranging from USc7.09/kWh to USc8.38/kWh) and still uniform across the country (except for Ninh Thuan province which stays at USc9.35/kWh).

...may only succeed in attracting investment in the southern provinces, putting further pressure on the overloaded grid

Photovoltaic (PV) power potential in Vietnam ranges from 2.6 kWh/kWp in the north to 4.4 kWh/kWp in the south. As a result, the majority of the new solar power projects have been installed in southern Vietnam (including the 600MW Dau Tieng project shown in the image above, which is Southeast Asia's largest solar farm). However, transmission lines, which take much longer to get approval and build, have struggled to keep pace with the new solar capacity. This has resulted in losses for the developers as the existing grid is insufficient to accommodate 100% of the new solar electricity that can be produced.

According to VnExpress last year, some renewable power plants in the southern province of Ninh Thaun (where PV potential is high) could only operate at c60% of their maximum capacity. We believe that uniform FiTs across the country will encourage developers to prefer southern Vietnam and put further pressure on its already overloaded grid. 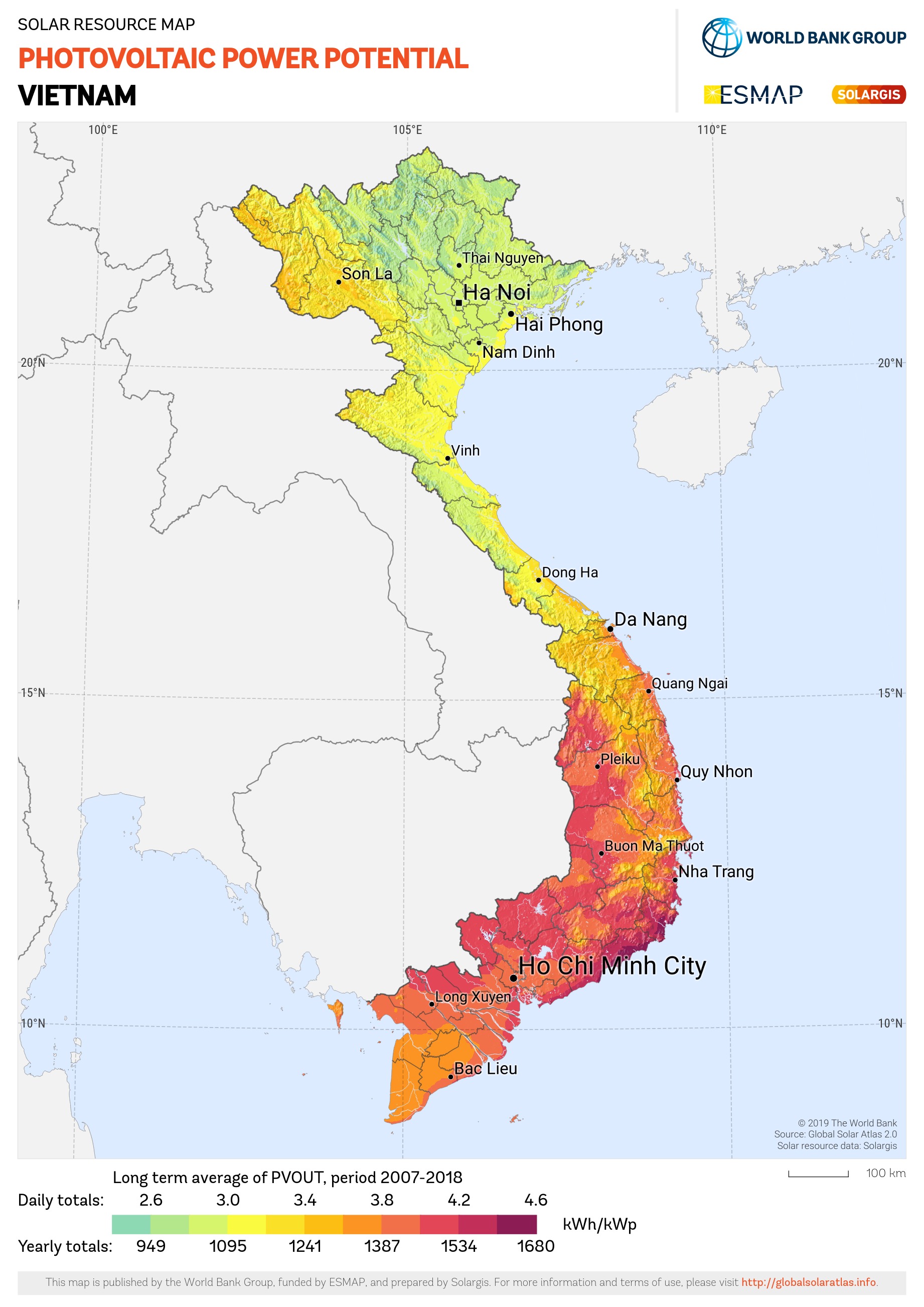 * kWh/kWp is simply defined as units of electricity (kWh/day) which could be generated for every 1kW of installed PV capacity.
Source: Global Solar Atlas 2.0

We estimate that 3.8GW worth of grid-connected projects could be installed by 31 December 2020. This will take Vietnam's solar power capacity to 8.9GW, or 14.1% of total installed capacity (all else being equal).

However, aside from the tight deadline, there are some conditions to meet. For grid-connected solar power projects, it is mandatory for the electricity seller and the electricity buyer, state-owned Vietnam Electricity (EVN) or its authorised members, to sign a 20-year PPA. Moreover, the decision on investment policy must have been issued by relevant authorities before 23 November 2019. These projects could qualify for the below FiTs only if they achieve commercial operations date (COD), either partially or wholly, by 31 December 2020. The FiT for solar power projects which fail to comply with these conditions will be determined through a competitive mechanism, i.e. a price-competitive auction scheme which is expected after 1 January 2021.

For the first time, the Government of Vietnam has allowed direct power purchase agreements (DPPAs). The term 'Electricity Buyer' now includes organisations and individuals, which means that the state-owned EVN and its authorised members are no longer the exclusive purchasers of electricity from solar power projects.

This facility, however, is limited to rooftop solar power systems, provided that the electricity buyers 'do not make use of EVN's grid for the purchase'. The tariff and the PPA could be agreed between the buyer and the seller at their discretion, as long as it conforms with the applicable laws. This may encourage investments in indigenous solar power capacity, especially by Vietnam's manufacturing sector which consumes c60% of total electricity, and help ease pressure on the electricity grid.