24 May 2022
Published by
Tellimer Research

The pain of listed equity investors has dominated recent headlines, but those exposed to less liquid private equity assets will soon find that they are also in the same boat. Late-stage funding deals are already seeing downward pressure, as IPO exit routes get closed off, and this trend will likely filter down through to Seed-stage deals.

The key culprits are higher interest rates and less rosy macro growth projections, both of which disproportionately impact the high-growth companies in which venture capital firms invest. The result is that start-up companies are likely to switch from growth to cash-conservation mode, meaning product roll-outs/upgrades and marketing campaigns get delayed or shelved.

The good news from this bleak picture is that, for those companies that can survive the downturn and for those funds that can snap up bargains, the next upswing will likely prove to be highly lucrative.

Global equity investors have had a torrid few months, with the market down 18% since the start of the year. But the pain has been concentrated in highly valued, growth-oriented sectors, which are more sensitive to changes in key valuation model inputs, such as discount rates and long-term growth.

The Communications Services, Information Technology and Consumer Discretionary sectors have all declined by more than 20% so far this year. In contrast, value-driven sectors, like Utilities, have so far been relatively unscathed. 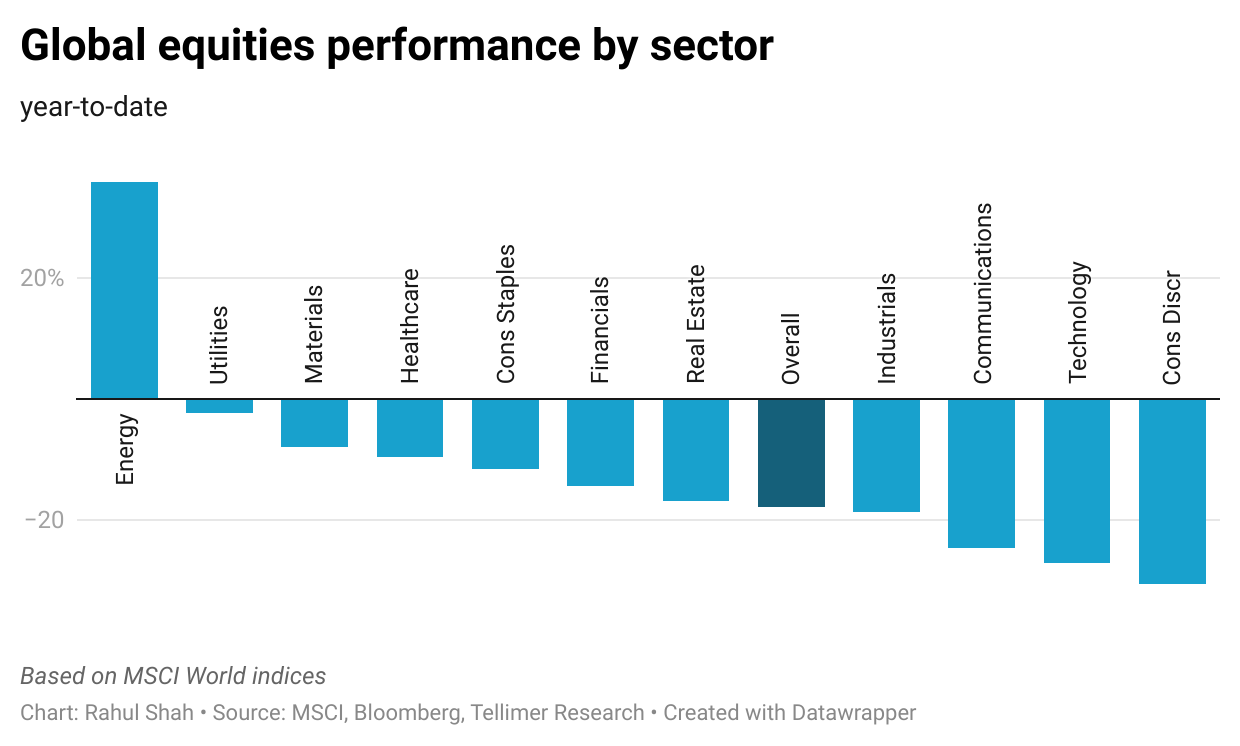 VC dealflow has slowed and valuations have dropped

In the world of venture capital, valuations do not change in real time. But, even here, we are seeing signs of a sea-change. Funding transactions have slowed; based on CB Insights projections, Q2 22 should be down 28% from the Q3 21 peak. And valuations will have dropped (36% off the peak), particularly for later-stage deals where the IPO exit route is a key pillar of the investment case. 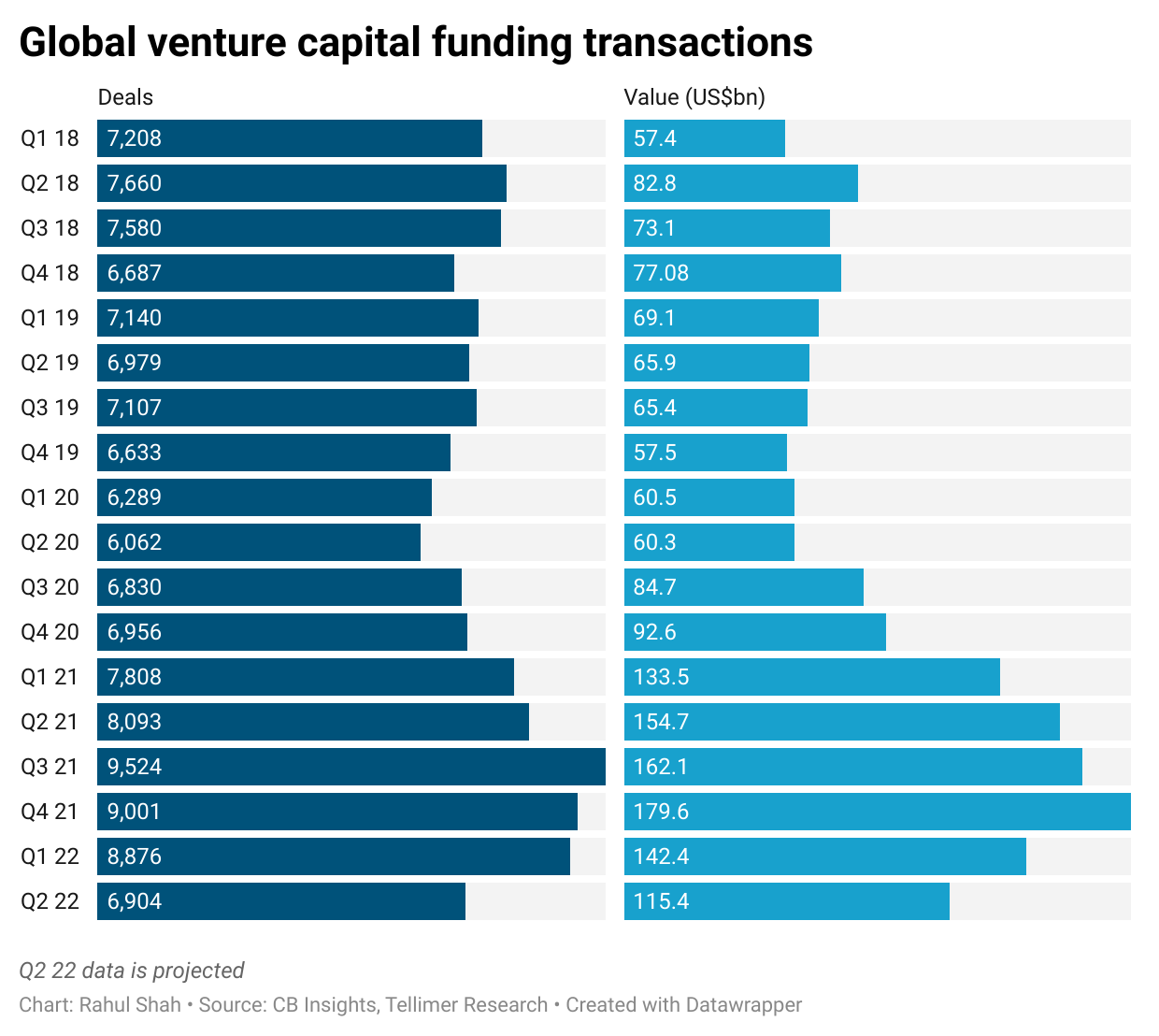 European fintech darling, Klarna, has not escaped this challenging environment. Press reports last week suggested Sweden’s Buy Now Pay Later pioneer was closing its latest funding round at a valuation of US$30bn, roughly half the valuation it was seeking earlier this year, and down from a US$46bn valuation it obtained in its previous funding round, in June 2021.

Interestingly, despite the valuation haircut, it seems the firm has not been able to attract any noteworthy new shareholders to its register. We have previously highlighted that BNPL fintechs are especially susceptible to higher interest rates, particularly when slowing economic growth can impair asset quality.

Refinitiv’s Venture Capital index attempts to provide a real-time assessment of the value of US venture capital assets. The index shows the spectacular performance of this asset class; from the 2000 dot-com boom to the end of last year (ie peak-to-peak), performance has averaged over 13% per annum (versus 6% per annum for the Nasdaq Composite over the same period).

However, recent trends are much more sobering. Since the beginning of the year, the index is down 52%. This is steeper than the 28% decline in Nasdaq composite index over the same period and is consistent with the higher-risk, higher-growth profile of typical VC portfolios. For historical context, during the bursting of the dot-com bubble at the beginning of this century, both Nasdaq and this VC index fell by around 70%, peak-to-trough. 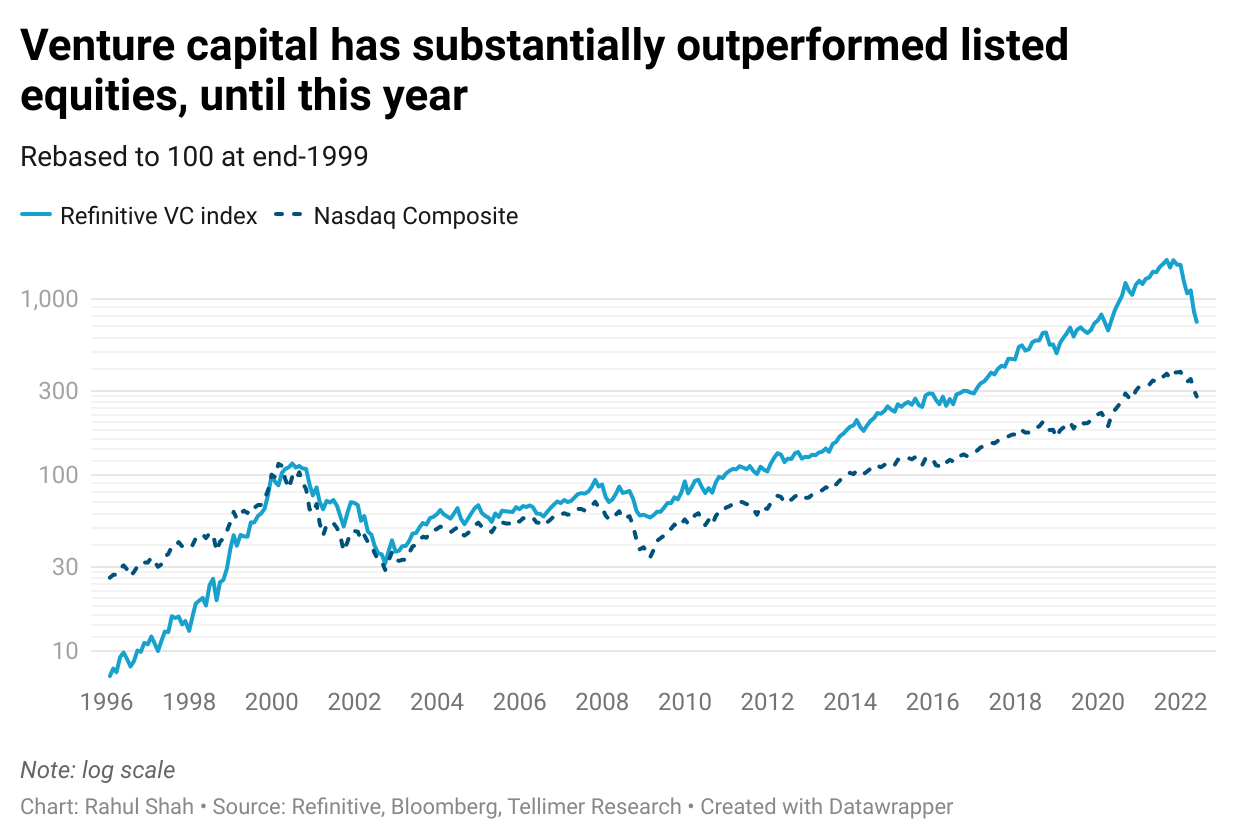 The VC index is heavily skewed to technology companies. Key firms driving the downturn include the likes of PayPal and Netflix. 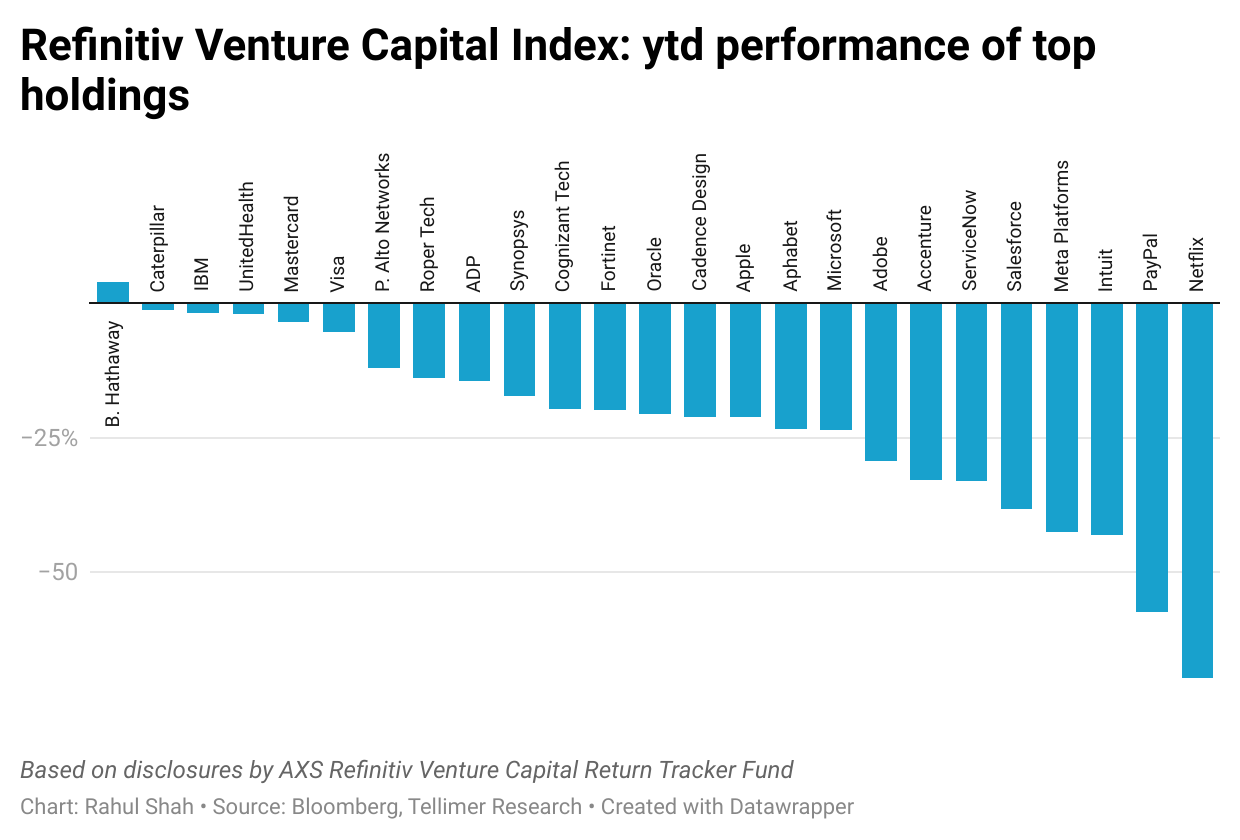 Startups should conserve cash; new funding will be hard to come by

In another sign of the more challenging environment for both VC funds and their investee companies, Y-Combinator, a high-profile Silicon Valley-based accelerator fund, contacted its portfolio firms last week with 10 rules for the new reality – basically, telling them to plan for the worst but hope for the best.

Key highlights include cutting costs within the next 30 days to extend the cashflow runway so that the business can reach a 'Default Alive' point (ie self-sustainability) without raising money for the next two years. This will likely entail painful decisions such as employee layoffs (as Klarna has recently done, for example). And those firms that can raise money now should do so, even if there is no bump-up in valuation.

The payoff for firms that can survive this period of protracted belt-tightening is that there will be less competition on the other side, opening the door to significant market share gains.

VC firms that are sitting on cash could generate outsized returns

Just as the startup ecosystem could experience a shakeout, a similar trend may also be seen in terms of VC funds. This could reduce the number of bidders for attractive firms. The silver lining is that this environment should allow well-funded investors to bag attractive entry prices.

Although SPAC share prices have collapsed, the US$150bn+ cash they hold could go a lot further in a few months. For VC industry-watchers, SPAC share prices could provide a real-time gauge of when the VC market has bottomed. Based on the last VC investment cycle, getting in at the bottom could add 7% points to annualised over-the-cycle investment performance of this asset class (ie a 50% uplift). 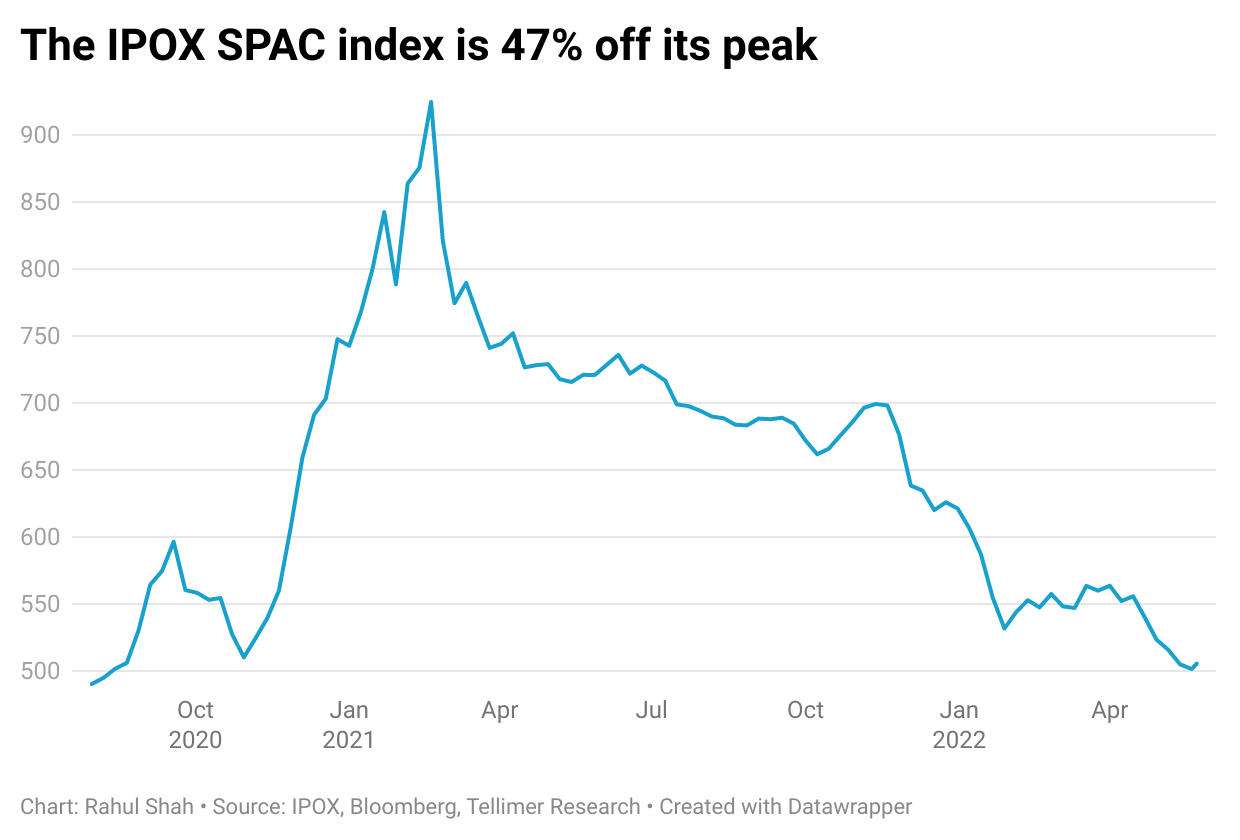