Venezuela: Hopes for sanctions relief fades as reality sets in

Venezuela's dollar bonds, defaulted and sanctioned, have jumped this month (with prices for the VENZ '27s rising 50% from around US$6.5 to US$10, based on indicative prices on Bloomberg), presumably amid demand from non-US funds.

This follows the surprise visit of a senior US delegation to Caracas on Saturday 5 March reportedly to discuss alternative oil supplies in case of a trade ban on Russian oil and an easing in US sanctions on Venezuela, as the Biden administration eyed an opportunity caused by Russia's war with Ukraine to prise Venezuela away from Moscow's influence (offering some sanctions relief as the carrot). The US announced a ban on Russian oil imports on 8 March.

While signalling a major policy shift in the US, after the failure of the "maximum pressure" under the Trump administration, and recognising the changing political situation on the ground in Venezuela, with the fading in support for interim president Guaido, we think optimism over a US-Venezuela rapprochement, surely one of the more unexpected consequences of Russia's war with Ukraine, is overstated.

Indeed, the US has seemingly rowed back and instead reiterated the message that sanctions relief is tied to "concrete" progress in government-opposition talks, where progress might be slow and uncertain. 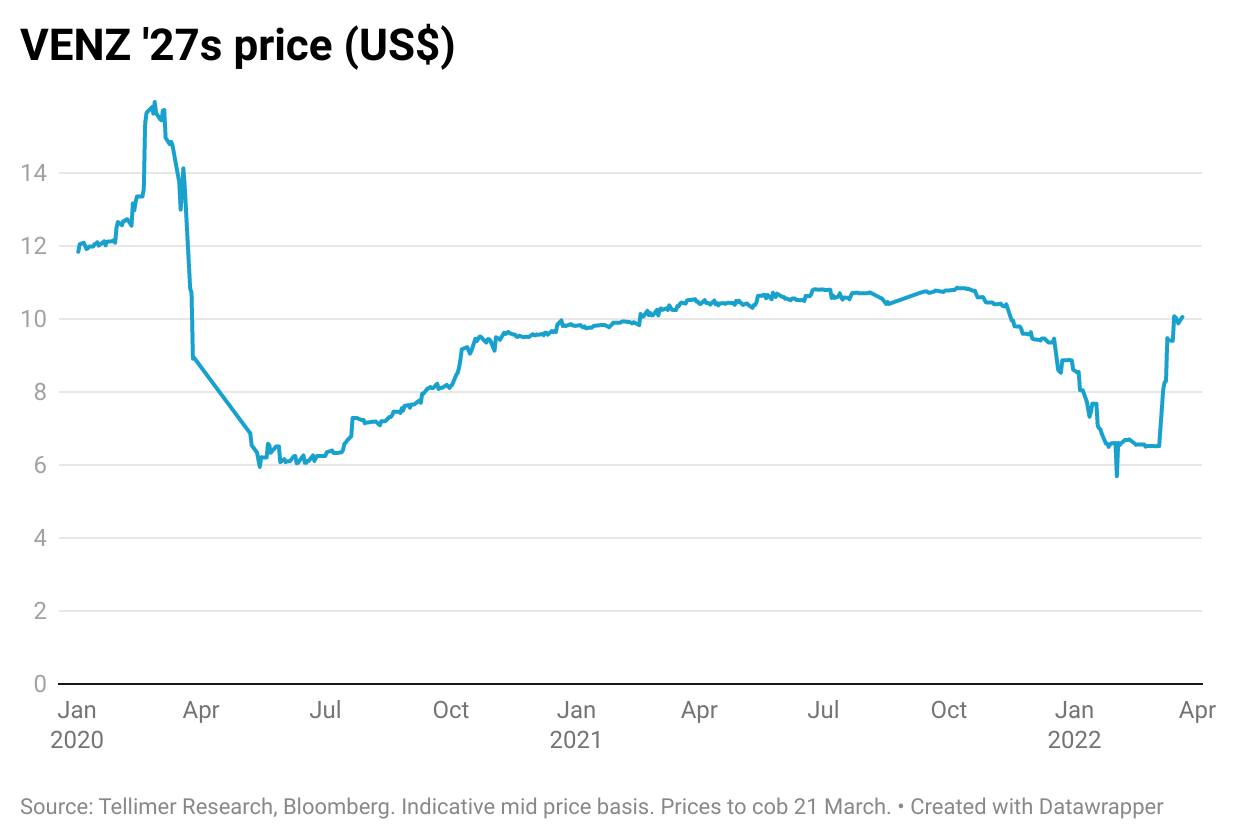 A US volte face

For one, even the US's own messaging has changed since the visit and, in the face of domestic criticism from senior Democrats and Republicans, the Biden administration has itself seemingly rowed back on the possibility of allowing Venezuela oil imports and an easing in sanctions. Critics argue foreign policy is being subjugated to self-serving and short-term opportunism. Notwithstanding some likely support in the US oil-states, Biden may not wish to risk a political clash ahead of the mid-terms in November.

Initially described as a discussion of energy security and US detainees, the US State Department said later that the visit had two priorities – to secure the release of wrongful detainees (two US citizens being wrongfully detained in Venezuela were released a few days later, after months of back-channel negotiations) and to support the democratic aspirations of the Venezuelan people, urging the Maduro regime to return to the negotiating table with the opposition, with no mention of energy talks. The US has denied there was any kind of quid pro quo for the prisoner release and that there were no talks about the lifting of oil sanctions.

Moreover, some of the initial impetus for a deal may be off, as the oil price fell below US$100/bbl from its peak of cUS$130, although it is now back at US$120 (Brent).

In addition, is it worth all the fuss? It is not even clear if Venezuela can fill the gap left by a ban on US imports of Russian oil, even if Russian oil imports are actually quite low, let alone make up for all Russian oil if it is removed from the market altogether (Russia exported an average of 4.7mn bpd in 2021). 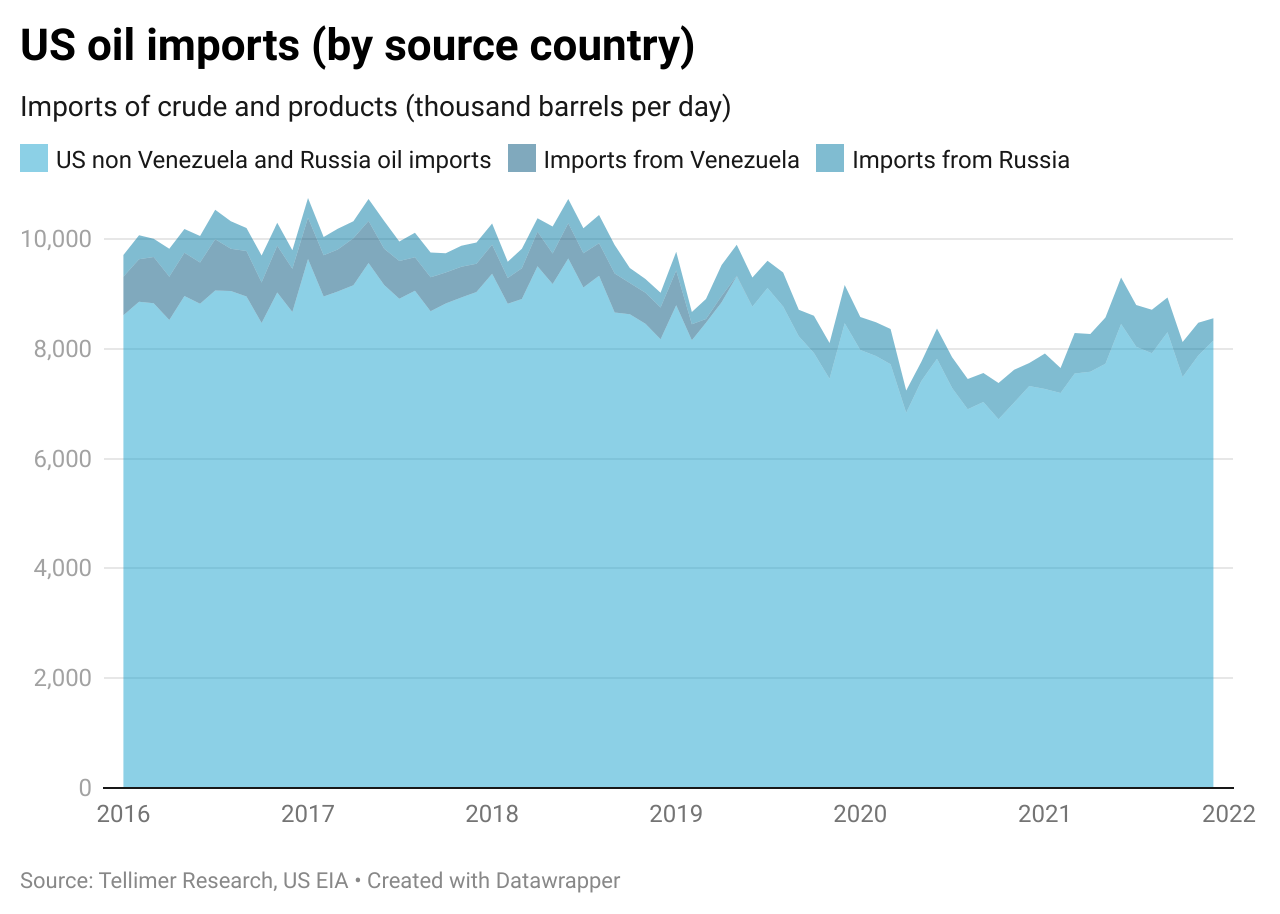 Meanwhile, Venezuela's oil production, although it has risen from the lows of c300k bpd in 2020, is only c600k bpd, according to Bloomberg data (averaging 550k bpd in 2021 and standing at 620k last month) – however Venezuelan data reported to OPEC is higher (c800k) and the government itself says it is 1mn. Industry experts caution over how quickly Venezuelan production can be ramped up given years of mismanagement and under-investment, although US Gulf Coast refiners are best placed to process Venezuela's heavy crude. 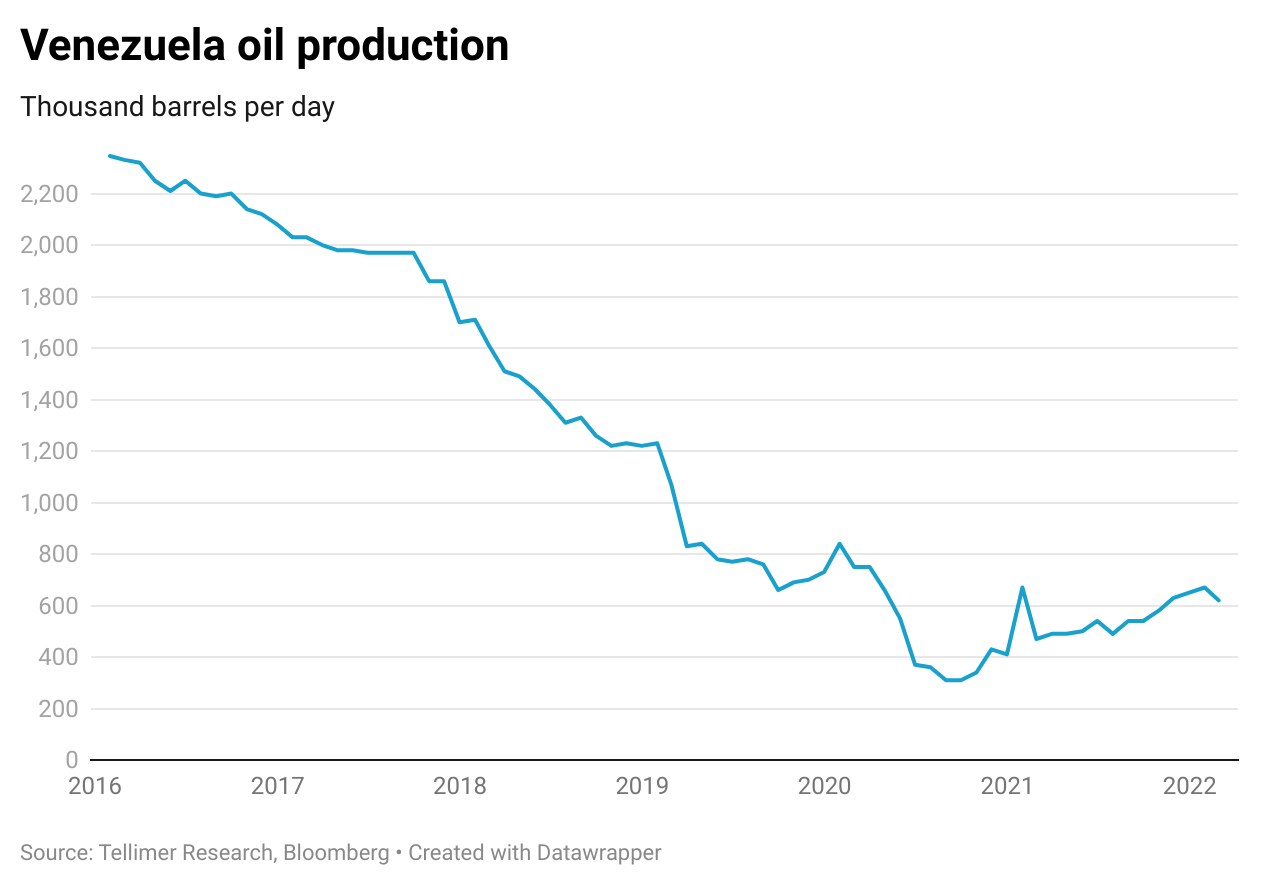 Yet, despite the relatively small sums involved (in terms of US imports of Russian oil), which one might think meant there might be other ways to cover the loss, that is not so obvious either. For example, it may not be feasible to expect the shortfall to come from US shale oil given rising costs and supply chain issues there.

That said, one possibility for sanctions relief is for Chevron's special licence to operate in Venezuela to be extended beyond its June expiry and to allow it to resume shipping oil cargoes from its JVs in order to recover unpaid debts. Despite US sanctions, Chevron has a special licence in order to maintain its facility.

But there is a path to easing sanctions, and some support in the US for the removal of broad sanctions in favour of targeted sanctions, after the failure of the "maximum pressure" policy. The US says it would review some sanctions if and only if Venezuelan parties made meaningful progress in the Venezuelan-led negotiations in Mexico towards achieving a genuine democracy. US National Security Advisor Jake Sullivan referred to tying sanctions relief to "concrete steps” on 13 March.

To that end, the US supports the opposition Unitary Platform's goal of immediately resuming negotiations with the Maduro regime.

Previous rounds of talks have broken down. Seeing his domestic support fade, interim president Juan Guaido, still recognised as such by the US, but relegated to the position of "privileged interlocutor" by the EU in January 2021 after Maduro's PSUV took control of the National Assembly following fraudulent legislative elections in December 2020, called in April 2021 for a wider opposition umbrella to negotiate with the Maduro regime after the failure of previous talks mediated by Norway in 2019. A new round of talks began in Mexico in September 2021, but they were soon suspended by Maduro after the US extradited one of his allies (Alex Saab) for money laundering.

However, in a positive step, Maduro also stated his willingness to return to negotiations during the US visit. A marriage of convenience, perhaps, but it may also come from a position of strength, following the PSUV's success in gubernational elections in November 2021, although those elections were also seen as flawed.

Indeed, no sooner than saying this, the Venezuelan government seemed to be adding pre-conditions, saying it wanted to widen the talks to include more groups (a classic Venezuelan strategy to delay, divide and obfuscate), insisting on Saab's participation, and saying it will not meet with Guaido, accusing him of being connected to an alleged drug dealer. The government also added the talks need to reflect the outcome of the November 2021 local elections. Given those elections were also flawed, and the opposition didn’t do so well, this is another tried-and-tested ploy to manipulate participation in the talks.

It is also reported that Venezuela has called for the US, and others, to recognise Maduro’s government as the only and legitimate government of the country.

Hence the path to negotiations, let alone towards free and fair elections, with the next presidential election due in 2024, is still fraught with trickery and uncertainty. The US will therefore need to see credible, verifiable and irreversible measures, before considering sanctions relief. Otherwise, easing sanctions now, without any tangible progress on the political side, would merely give the Maduro regime additional resources to extend its stay in power – unless, with an eye on Putin, Maduro and his inner circle see an opportunity to cut a deal with the US to step aside for immunity.

But, even if there is some easing of sanctions to allow Venezuelan oil imports, it is not clear that this will extend to allowing US institutions to trade the bonds, let alone be enough to open the door to a sovereign debt restructuring, as investors may hope.

After all, Maduro is still a wanted man in the US, with the US State Department posting a US$15mn bounty on his head, and he faces an ICC investigation into alleged crimes against humanity, so the optics would be terrible (over and above any oil deal) and there would be little interest from the US, and possibly Europe, to allow his regime to gain any financial benefit. However, trading defaulted bonds does not accrue any immediate benefit to the Venezuelan regime and US funds may argue for a level-playing field with other (non-US) investors, including those in Europe without a US nexus, that can trade the bonds, given the US ban on secondary market trading has not led to the desired regime change either.

In any case, restructuring is still some way off (and we don't know how this happens in a post-war world with Russia and China as significant bilateral creditors) and without an internationally recognised government, it is not even clear who creditors can negotiate with.

Moreover, in common with most sovereign restructurings – particularly one this complicated – it would surely have to happen in the context of an IMF programme, with an up-to-date economic assessment (and even rudimentary data collection), assessment of export prospects and repayment capacity, debt sustainability analysis, design of a credible policy framework, and financing assurances from donors, given the economy's collapse, deterioration in its physical and human capital (some 6mn Venezuelans – a quarter of its population – have fled the country, mostly since 2015, according to the UN HCR), and damage to its institutions. It seems unlikely to us that this can happen without wider sanctions relief and a credible and sustainable political solution that leads to an internationally recognised government.

Venezuela began defaulting in November 2017 and, four years on, little has happened since then. US sanctions, already in existence at the time on certain individuals (SDNs), prevent any negotiation with the Maduro regime or the issuance of new securities to effect an exchange; and of course, other issues prevented a restructuring too. Subsequent US OFAC sanctions (EO13808) imposed in January 2019, and later extended, restricted the trading in sovereign and PDVSA bonds.

There have, however, been media reports that Maduro's economic team have held talks with bondholders, although to what end is unclear.

In the meantime, past due interest (PDI) continues to accrue. We calculate PDI is worth around 40pts. 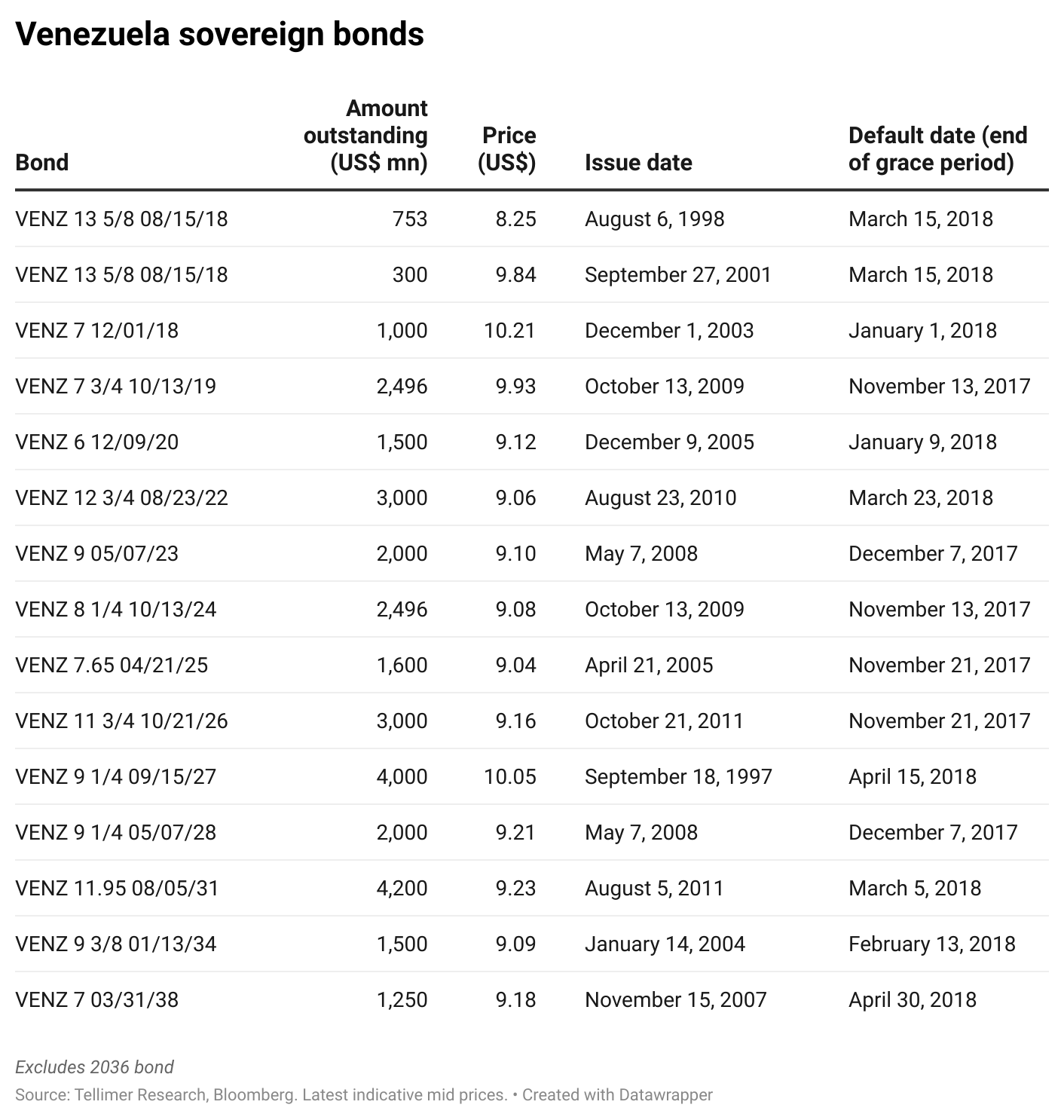 Still, at these prices (c10 cents on the dollar for the 27s and other selected bonds, and high single figures for the rest of the curve, according to indicative prices on Bloomberg), and even lower prices in real terms if we factor in PDI (a net price of around 7 cents), even after the rise this month, Venezuela bonds may still look attractive – for patient and risk tolerant investors – and prices may be well below recovery values under some plausible restructuring scenarios, although of course recovery prospects remain highly uncertain.

We calculate, back of the envelope, that public external debt is likely to be over some 200% of GDP currently, although even assuming some normalisation of exports, that would still be over 450% of exports. The stock of defaulted sovereign bonds amounts to US$31bn (excluding the opaque US$5bn 2036 central bank bond).

Even so, from these kind of deep-distressed levels, there is only one direction, although prices have been here for two years and could still languish here for some time to come. However, investors will still have some compensation as they continue to accrue PDI.

In the near term, we expect prices will track developments on the negotiations and/or any moves on the sanctions, and the reported back-tracking in the US position as well as expected slow progress in government-opposition talks may cap further upside.