We set out our thoughts on Uzbekistan following our discussions with the IMF team during the recent IMF/World Bank Annual Meetings. We would like to thank IMF staff for their time. The views we set out here are our own. We maintain our Buy on the UZBEK 3.9% 2031 bond with a yield of 8.9% (price US$69.7) on a mid-price basis as of cob 21 October on Bloomberg.

The situation has changed a bit since the IMF Article IV was concluded in June; bearing in mind the Article IV mission took place in late March/early April soon after the war in Ukraine had started, and there was a lot of uncertainty and hence caution at the time about its impact. Concern centred on the expected fall in remittances from Uzbek workers in Russia, in terms of both the extent and its likely impact (with 1.5-2mn workers in Russia, out of a total Uzbek workforce of 14mn). It was assumed that Uzbek remittances from Russia would halve (prior to the war, remittances amounted to c10% of GDP, over half of which were from Russia, according to the EBRD), while some workers would lose their jobs and it could be harder to get money out of the country (due to CBR administrative restrictions). There were also concerns about the impact of lower investment from Russia and a reduction in Russian financing (especially into local gold and copper mines) given western sanctions on Russian banks. There was, however, less concern about the impact on direct trade; Uzbek trade with Russia is mainly in basic agriculture which would continue regardless.

But such fears have not materialised and things now look better, largely because the expected fall in remittances did not happen; if anything, they have increased, we understand some two- to threefold. Uzbek workers kept their jobs and are sending as much as they can back. They might also be running down savings rather than taking the risk of keeping money in Russia. In addition, there may be capital flight from Russians themselves, some of which may be finding its way to Uzbekistan. However, the sustainability of such flows was hard to judge; it is too early to tell whether, in what size and for how long they will continue. 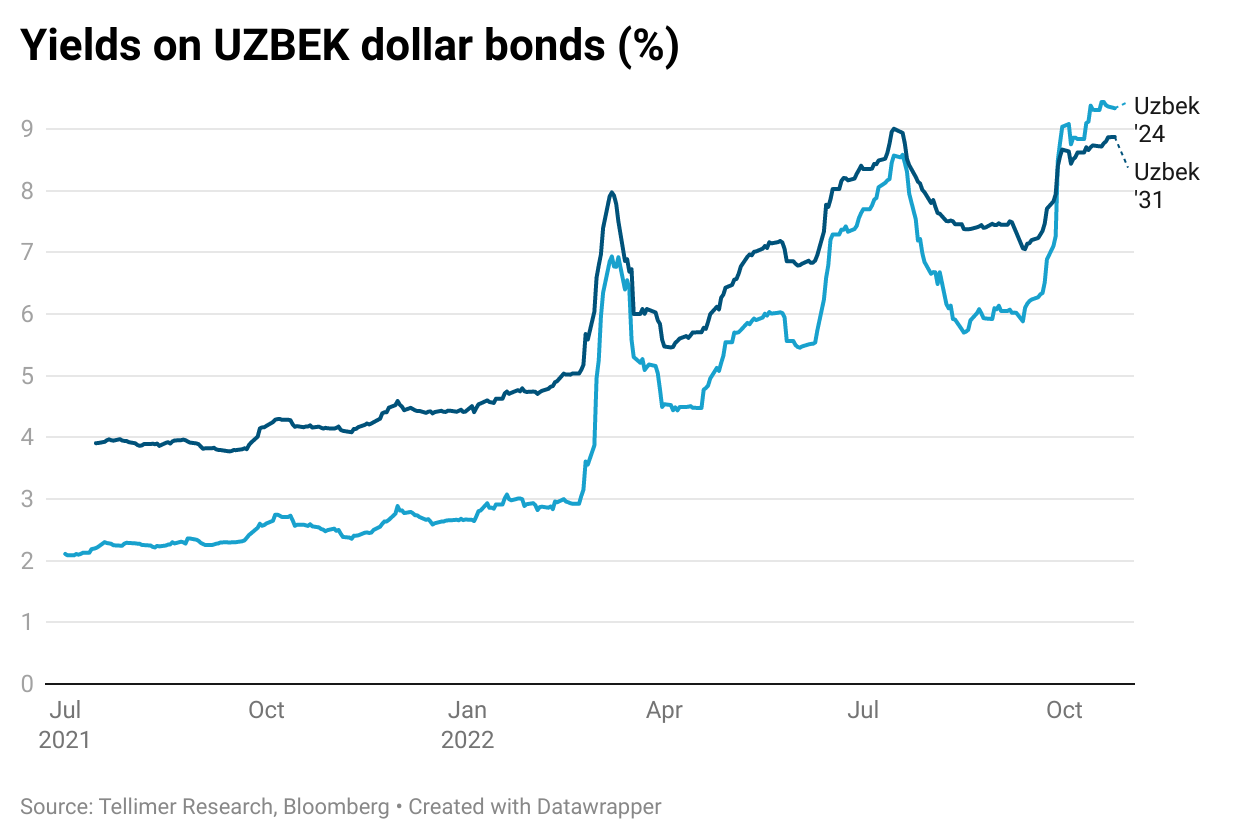 As a result, the macro outlook is seen as pretty good. The IMF's projection for real GDP growth this year has been revised up to 5.2% in the latest WEO, up from 3.4% in the Article IV, with growth mainly driven by private consumption and government spending (real GDP growth was running at 5.8% yoy in the first nine months of the year). There is some contraction in the fiscal stance this year but less than planned. Growth is expected to slow a little next year, to 4.7%, because of the global slowdown (including China). Meanwhile, there has been a substantial narrowing in the current account deficit due to stronger remittances while exports to Russia have also held up well (with gains from market access, although financing is more difficult). The current account deficit is expected to fall to 3.3% of GDP this year in the WEO, down from 7% last year, and it may be even narrower still. The deficit is, however, projected to remain at c5% of GDP over the medium term.

Monetary policy has been tight and the central bank demonstrated its independence, increasing its policy rate in March by 300bps to 17% (implying a sizeable positive ex ante real interest rate of 650bps) in response to an exchange rate shock – expected depreciation of the Russian ruble (RUB) would put pressure on the Uzbekistan soum. But the central bank has cut rates since then, by 200bps (100bps in June and 100bps in July, rates were left unchanged at its September meeting), largely as inflation has remained remarkably low and stable – especially compared with the region and the rest of the world – and in the face of the unexpected RUB appreciation. CPI inflation was 12.2% yoy in September, up only slightly from 10.0% at end-2021, although still well above the central bank's 5% inflation target. With a policy rate of 15% and inflation of 12%, real interest rates remain positive (albeit less so than before) while inflation expectations, still high, have fallen. Still, upside risks to inflation remain (government wages have been increased although a utility price increase planned for the summer was shelved) and monetary policy needs to remain cautious. The next central bank policy rate meeting is due on 20 October.

The authorities target a gradual fiscal consolidation. We understand the overall deficit widened to 6.5% of GDP in 2021 (it was 4.7% in the WEO) and this is expected to narrow to 4-4.5% this year. The 2023 draft budget envisages a further narrowing to 3-3.5% next year. With public debt below 40% of GDP (projected at 34% this year in the WEO), fiscal policy remains sound and should not threaten debt sustainability. The IMF DSA assessed Uzbekistan to be at low risk of debt distress. The government is, however, planning a lot of PPPs (amounting to some 10% of GDP), although not all of these projects will come off. But although off balance sheet, they will still have implications for the debt (either as a contingent liability or directly, if the authorities seek to bring them on balance sheet). The new debt law limits total public debt (PPG basis) to 60% of GDP (excluding PPPs) and the authorities will need to consider how to bring them on balance sheet to manage debt risks more effectively (as well as to enhance transparency and accountability). 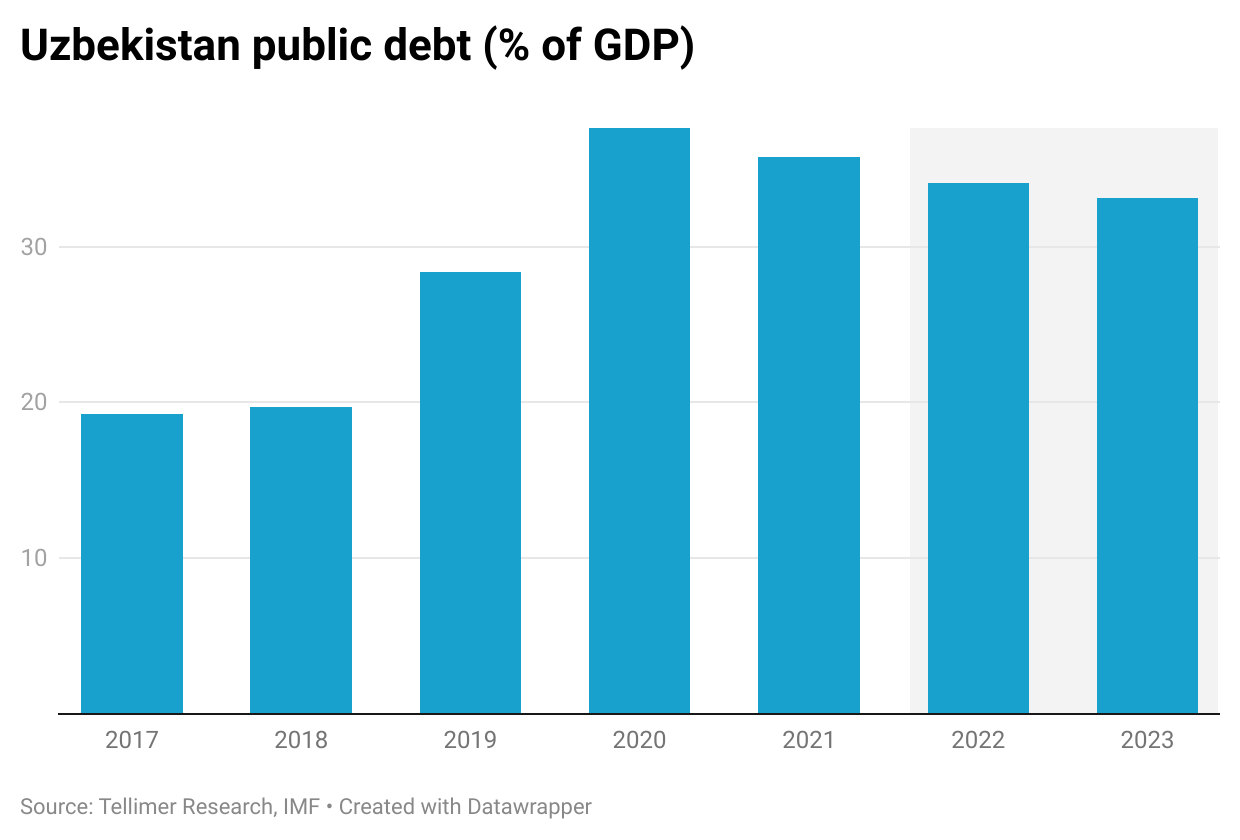 That said, financing has become more challenging because of tighter global financing conditions and rising risk aversion, while financing from Russia (and elsewhere) is harder to come by. This has also made privatisation more difficult. Meanwhile, if there were any plans for another eurobond issue this year, after issuing annually over the last three years since debuting in 2019, they will have fallen by the wayside given market conditions. We assume the authorities are unlikely to issue now with their dollar bonds yielding 9% (the authorities may prefer not to issue if they don’t need to). This is why they have asked for more money from IFIs. They receive a lot of financial support from the World Bank and Asian Development Bank. As a result, we think financing needs for this year are covered. There may, however, be a question mark over next year – with IFIs having lent a large amount over the last three years, could there be less scope in future? Still, the authorities haven’t used the SDR allocation and have that in reserve. Meanwhile international reserves, including gold, stand at a very comfortable US$34bn (as per the IMF IFS, latest month is August) – still around 50% of GDP; such that we think Uzbekistan is a net public external creditor.

However, we don’t think there is any interest in, or need for, an IMF programme, although deeper Fund engagement could be seen as a positive by investors. With a vanishing current account deficit, and ample official reserves, there is hardly a BOP need (the 2020 emergency financing under the RCF was more a goodwill gesture than anything else). However, we do wonder if a non-financing arrangement may be something for the authorities to consider. This could take the form of a Policy Coordination Instrument (PCI) or the Fund’s new instrument, Program Monitoring with Board Involvement (PMB) – essentially a Staff Monitored Program (SMP) with board reviews – although the PMB is designed for circumstances different to Uzbekistan's. The point is that, with some data deficiencies and lack of timely information, engagement that provides regular board oversight and better visibility will be welcomed by investors (few people know much about Uzbekistan). And given the authorities’ good relations with the Fund, seeing eye to eye on macro-policies, and their track record of reforms (Uzbekistan has come along way on improving the macro policy framework, and now needs to focus on second generation structural reforms, including reducing the role of the state and dealing with the large informal sector), we’d expect they should be able to get something if they asked.

Meanwhile, geopolitics presents another concern for investors. Politically, Uzbekistan finds itself stuck in the middle between Russia and the West, and aiming to keep friends with everybody. It is trying not to rock the boat with Russia, and is perhaps less western looking than say Ukraine or Georgia, while the country, under its reformist President, in power since 2017, values its independence.

We maintain our Buy on the UZBEK 3.9% 2031 bond with a yield of 8.9% (price US$69.7) on a mid-price basis as of cob 21 October on Bloomberg, while we still see the short duration 4.75% 2024s at a yield of 9.4% (price US$94.4) as attractive for defensive investors. The bonds have suffered this year, in tandem with everything else, due to the impact of the war in Ukraine and tightening in global financial conditions, with the price of the 31s down 27% ytd, although they have managed to outperform the index (a total return of -18% vs -26% for the Bloomberg EM Sovereign USD index). We recognise that the 31s are down 16pts (19%) since we assigned a Buy on 22 April although they are 1pt higher than when we included them in our Top Picks for H2 on 20 July.

Our positive view on Uzbekistan (B1/BB-/BB-) was based on the country's sound macro-policies, low government debt and a strong external liquidity position, with low debt service on the bonds reinforcing ability to pay (total interest payments are still only US$96mn a year, albeit with the next maturity, US$500mn, in 2024), and while the direct impact of Russia's war in Ukraine presented a significant risk to the outlook, we are reassured that this has not played out as initially feared, and rather instead, the country continues to perform strongly. Given this, we remain positive on the bonds.

Indeed, the situation for Uzbekistan has changed for the better since then; there is a good story to tell. To that end, if the authorities want to maintain a market presence, we think they could consider a non-deal roadshow (NDR). This could be done soon, before the end of the year, or early next year, and it may make it easier to issue when and if market conditions do improve. Otherwise, from an IR perspective, with the last Article IV in June already somewhat overtaken by events, which many investors will rely on, and assuming the next one will not be until mid-2023 on the standard 12-month cycle, a NDR could usefully fill an information gap.

However, risks remain and investors may be concerned about the rising debt burden (public debt is deemed sustainable but the trajectory is upwards), high external financing needs and reliance on official sector funding, economic and geopolitical risks of spillovers from Russia's war in Ukraine and that Uzbekistan does get drawn into Moscow's sphere of influence, domestic unrest, and concerns over governance and transparency. 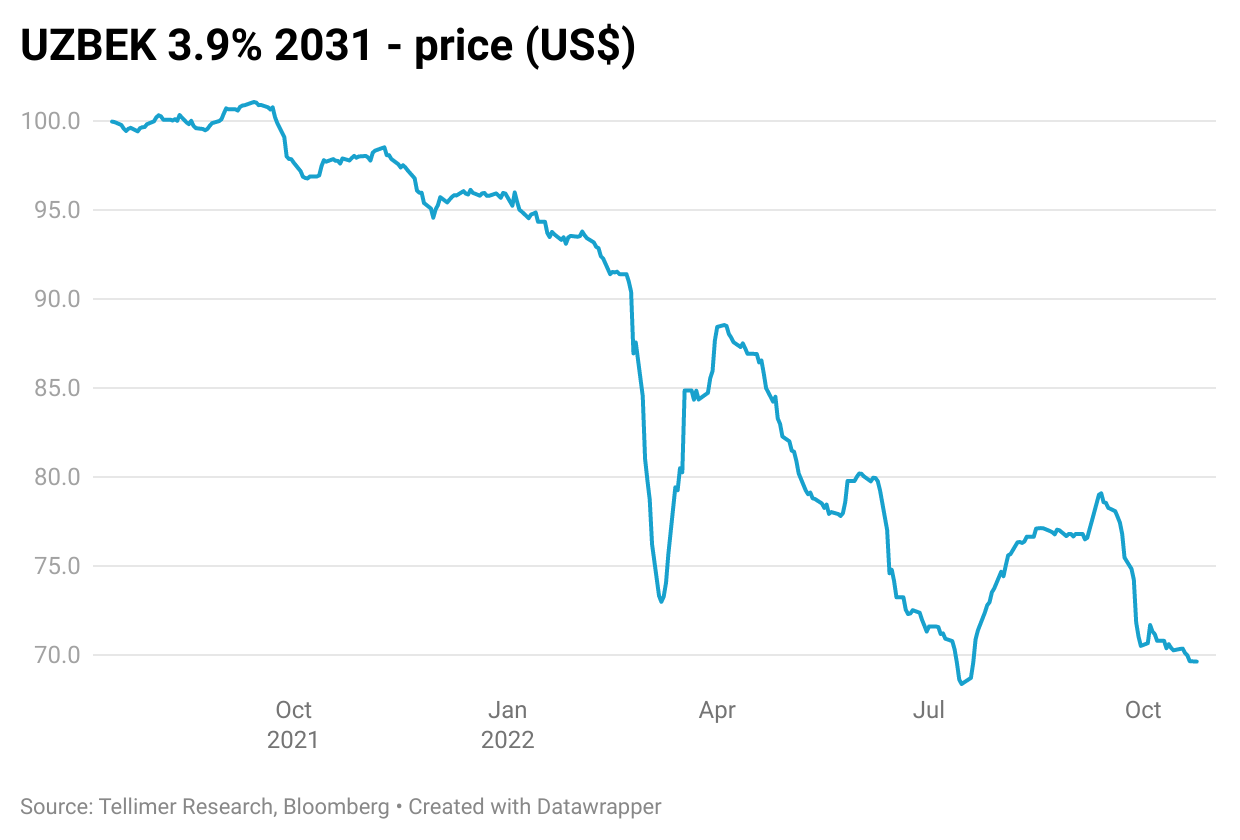