Focus in East Africa over the weekend was centred on the ongoing security issues in Ethiopia. The United States has expressed grave concern about fighting in parts of Ethiopia and urged the Ethiopian government and rebellious forces from the Tigray region to start immediate negotiations to address the conflict. US State Department spokesman Ned Price was quoted as saying, "we urge the Ethiopian government and TPLF to enter at once into negotiations without preconditions toward a sustainable ceasefire. We condemn all such abuses against civilians in the strongest possible terms and call on all parties to the conflict to respect human rights and comply with their obligations under international humanitarian law." The United Nations on Friday said that it had completed its joint investigation with Ethiopia's state-appointed human rights commission of abuses in the Tigray conflict, with a final report due on November 1.

On the economic front, this week could see the release of the Q2 GDP reports for Rwanda and Kenya. While the region still faces a number of headwinds, including a plethora of idiosyncratic challenges, economic activity in East Africa is expected to have rebounded in Q2. Moreover, we expect the economic recovery in the region to persist in the months ahead, supported by stronger external demand from the region’s trading partners—mainly China and the United States—higher commodity prices, and better containment of COVID-19. That said, we still expect the recovery to be fragile and uneven as the pandemic continues to impact some sectors more than others. 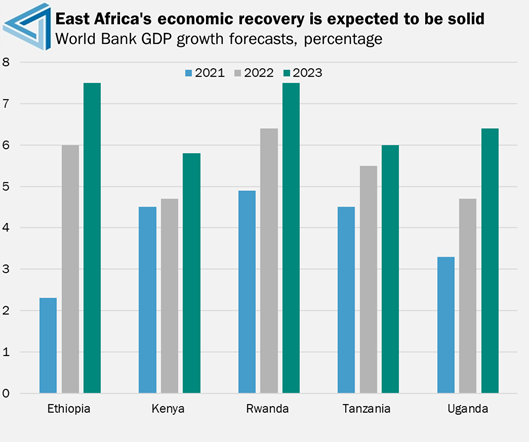 As flagged in the World Bank’s June Sub Sahara Africa report,  high debt burden and fiscal pressures could become more acute and precipitate financial distress in some countries, especially if borrowing costs increase sharply in line with further possible increases in long-term yields on government bonds in advanced economies and major EMDEs. Heightened fiscal pressures could also delay government payments to suppliers and contractors,  cause revenue shortfalls and bankruptcies among these firms,  and increase the likelihood of financial stress.

Uganda National Meteorological Authority has forecast the country to receive near-normal to below-average rainfall from September through December, which coffee authorities say may hurt the quality of beans and output volumes. According to the UNMA, "there is a high expectation for poor rainfall over most parts of the country during this season. However, from September to mid-October, the rainfall performance is expected to be enhanced." The forecast comes at a critical time when the harvest north of the Equator is due to begin. Low rainfall may hurt bean sizes and volumes and potentially reduce the amount of foreign exchange Uganda could earn from exports.

Ethiopia and Kenya are set to conclude guidelines for a $1.3bn power project, according to Ethiopian Energy Minister Seleshi Bekele. Bekele yesterday said that the governments were drafting an agreement on construction, operation guidelines for power interconnection infrastructure. The minister added that the project is set to facilitate regional integration and that the technical teams will conclude the drafting of the Ethio-Kenya energy interconnection.

Shifting the focus to Tanzania, the Bank of Tanzania’s monetary policy committee agreed to sustain liquidity easing measures in September and October to shore up lending to businesses and households, according to a statement on its website. While private-sector credit expanded by 4.1% in July from 3.6% in June, the rate is still lacklustre.

On the political front, Tanzanian President Samia Suluhu Hassan has strengthened her grip on the country following the appointment of key allies in her Cabinet reshuffle. It is widely expected that the reshuffle that may help her push through long-awaited energy industry reforms.

President Hassan appointed January Makamba as the energy minister, who will take the lead in the development of Tanzania’s huge natural-gas discoveries by companies including Royal Dutch Shell Plc, Exxon Mobil Corp. and Equinor ASA. Bloomberg reported that Hassan has ordered the resumption of negotiations with the oil majors on a delayed $30bn liquefied natural gas project, which stalled under her predecessor John Magufuli,

US consumer prices moderated for the third straight month in August, suggesting that some of the upward inflationary pressure is beginning to wane. Specifically, the consumer price index increased by 0.3% m/m last month following July's 0.5% m/m rise. The latest reading came in below market expectations that had pencilled in a more pronounced increase of 0.4% m/m. Prices of airline fares, used cars and trucks, and motor vehicle insurance declined over the month, while increases were seen in the cost of gasoline, household furnishings and operations, food, and shelter. On a y/y basis, consumer prices eased to 5.3% in August from a 13-year high of 5.4% reported in June and July, matching market expectations. Core inflation meanwhile disappointed, coming in at 0.1% m/m compared to 0.3% m/m printed in the previous month.  Notwithstanding the modest deceleration in inflation, consumer prices remain elevated, mainly reflecting the low base effect caused by the coronavirus crisis, the re-opening of the economy, and continued supply constraints. However, these effects are starting to abate, aligning with the Federal Reserve's narrative that inflationary pressures are transitory in nature.

Following the release, the trade-weighted USD (DXY Index) has pulled back sharply to test the 92.300 support. Some stabilisation in sentiment may be on the cards after investors appear to have already priced in a certain degree of pessimism over the past few days. The CPI data precedes next week’s FOMC meeting and suggests that Fed Chair Jerome Powell and his board members will be reluctant to dial back the monthly bond purchases in a hurry. So, the timeline as to when to expect a pullback remains as elusive as it was prior to the CPI release. With other important growth-related data this week, we are inclined to think markets may take a wait-and-see approach ahead of the central bank meeting next week.

Currency dynamics in East Africa remain unchanged at the start of the new week. As has been the case for some time now, the Ugandan Shilling is outperforming its regional peers this week with the UGX gaining 0.32% on the week at the time of writing. Pulling back the lens, the UGX has gained 4.11% against the USD this year to trade at around the 3531.4 mark. Looking ahead, while the bullish momentum in the currency has eased, we expect the bullish bias remain entrenched on in the weeks ahead as portfolio investors are anticipated to stay active as the economy rebounds. That said, a persisting current account deficit could cap gains further gains. The laggard in the region remains the Ethiopian Birr, which continues to be riddled by ongoing security concerns and elevated fiscal risks. Since the start of the year, the ETB has depreciated by more than 19% against the USD, making it Africa’s worst performing currency in 2021.

On the fiscal front, it is worth having a look at debt dynamics in East Africa to see which countries are most exposed to debt rollover risk. Reuters data compiled at the end of last month showed that debt rollover risks in Tanzania and Kenya are relatively modest. Debt rollover risks in Uganda, on the other hand, are elevated with more than 40% of all outstanding government debt maturing within the next 3 years. Global financial market conditions are likely to start tightening next year, which will make it harder and costlier for higher beta countries to issue debt and in Uganda’s case roll over the massive amount of debt maturing in 2022. 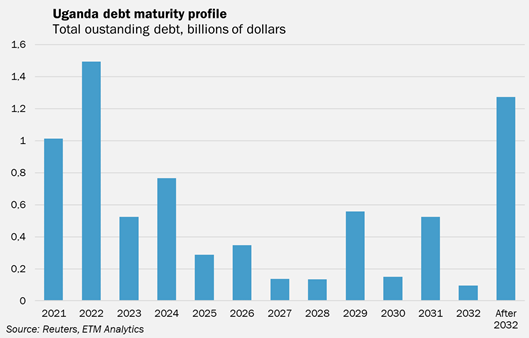 While Uganda faces a high debt rollover risk in the coming years, it is worth noting that the country doesn’t have hard currency debt, according to Reuters data. This suggests that its debt is not exposed to a currency blowout. The same goes for Tanzania. Kenya, on the other hand, does have a notable portion of its debt denominated in hard currency. Specifically, 17% of all outstanding Kenyan debt is denominated in hard currency. Note that greater ratios of foreign currency debt to total debt are associated with increased risks of currency and debt crises. However, the strength of the association depends crucially on the size of a country’s reserve base and its policy credibility. 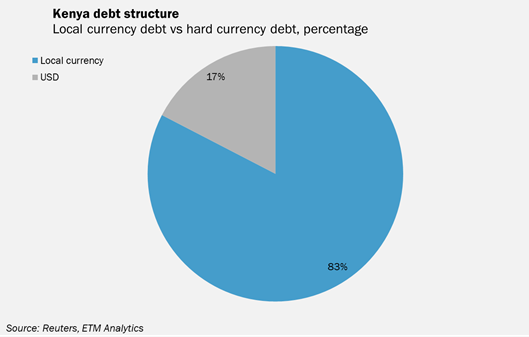