US weaponises all Tech regulation in China friction, EM Tech in the cross hairs

The weaponisation of regulation of non-US Technology companies by the US administration, demonstrated again by US President Trump's 6th August executive orders which may ban ByteDance's Tiktok and Tencent's WeChat in the US, reinforces concerns for the Technology sector generally and global emerging markets investment specifically.

Alibaba and Tencent (WeChat owner) are the two largest stocks in the MSCI EM index (with about 7.4% and 6.3% weights, respectively) and both fell about 5% the day after Trump's executive order. Their direct equity value at risk in the US may be less than 5% but the full repercussions for them may be wide-ranging in terms of additional operating costs and risks.

Can one confidently rule out a scenario where there are ultimately US sanctions or restrictions on US-based institutional equity funds from investing in any Chinese listed equity with even indirect or potential links to the Chinese government?

While US President Trump's actions should be understood in the context of a re-election campaign where he is trailing in the opinion polls, the identification of China as a threat is something he shares with Democrat candidate Biden (the difference is that Biden advocates a multilateral approach, as opposed to Trump's unilateralism). This issue will not disappear in the event of a Biden win in November.

The 'splinternet' (ie the balkanisation of internet applications, technology standards, and hardware supply chains) may present an opportunity for active fund managers in EM to outperform after many years of the relentless rise of Technology equities.

This rise has driven the dominance of the EM equity index by China-HK, Taiwan, and Korea (collectively, these four markets are now 65% of the index), the marginalisation of the long-tail of countries (with little Technology representation in their equity markets) in the EM index, and the near irrelevance of the FM index (which has virtually zero Technology).

The tide may be turning not so much on the adoption of new Technology but on the unimpeded growth of globally dominant Technology behemoths, all of which increasingly have to navigate the murky waters of global geopolitics just as grubbily as their 'old economy' counterparts in sectors like oil and gas, finance, pharma, and media.

This may imply higher cost or lower revenue growth related to local regulatory compliance (eg local storage of data, customisation of apps, legislative lobbying) and greater risk related to the unpredictable twists and turns of US-China friction (as more parts of the Technology ecosystem are ensnared, bans are reciprocated, and global allies join the fray of the US and India).

Weaponisation of US Tech regulation

US President Trump issued two executive orders on 6th August which may lead to an effective ban on video-sharing app TikTok (owned by China-based ByteDance) and messaging app WeChat (owned by China-based Tencent) on the US app stores of Apple and Google. This follows efforts to force a sale of TikTok's US business (potentially to Microsoft or Twitter) to evade a ban.

There are a number of points and questions of interest resulting from these executive orders and all of them are concerning for a mainstream emerging market investor heavily exposed to the Technology sector (whether in active strategy which has outperformed on the back of an overweight in Tech stocks in China-HK and Taiwan, particularly, or in a passive strategy where the aggregate weight of 'Tech' stocks (in the Technology, Communication Services, and Consumer Discretionary sectors) and China-HK stocks in the MSCI EM index is now about 50% and 40%, respectively. 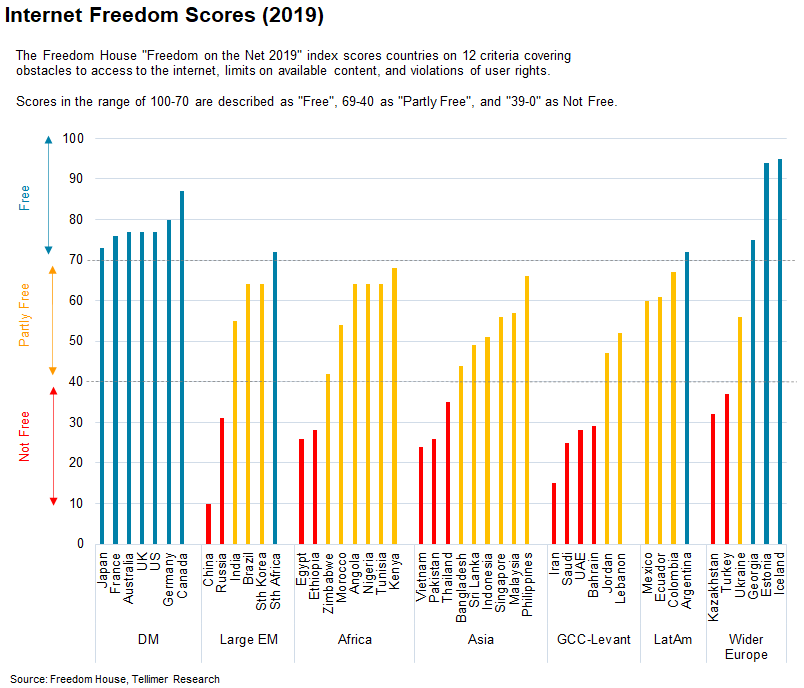 The accelerated adoption of new technology in the Covid-19 era (years' worth of penetration gains within a few months) and the relative deterioration of growth in 'old world, analogue' business models (reflected in mega-Tech's sharp out-performance on earnings growth) has dominated equity markets in DM and EM year to date.

The weaponisation of technology regulation adds to other potential catalysts (eg corporate frauds, cash flow distress, goodwill write downs, regulatory reviews, poorly received IPOs) for a generic reassessment of technology valuations might be caused by a range catalysts which force investors to question whether:

Active investing in EM equity after Covid-19: A final chance against passive

Wirecard bankruptcy could be a Lehman moment for e-commerce (Tiruchelvam)

Wirecard raises the bar for fintech due diligence: Understand the partnerships (Domjan)