US pledges $55bn to Africa, Ghana secures staff-level agreement with the IMF

Fixed income: Unsurprisingly, US Treasury yields declined sharply yesterday following the weaker-than-expected US CPI figures. The benchmark 10yr yield has dropped back below 3.50%, while the 2yr yield is nearing 4.20% as traders have pared their bets on further aggressive Fed rate hikes. The market is now pricing in a terminal rate of around 4.85% for the Fed, down quite significantly from the more than 5% pencilled in a few months ago. With the upper bound of the Fed Funds Rate already at 4.00%, this suggests that the FOMC could announce a 50bp hike today and then provide one last increase at the start of 2023 by 25bp before pausing its tightening to give the higher rates time to bring inflation back down to target.

Commodities: Brent crude has again breached the $80 per barrel level following a rally yesterday after the US CPI miss. US consumer prices posted their smallest monthly gain in a year, which has sparked hopes that the Fed will begin easing its aggressive monetary policy tightening. This weighed heavily on the US dollar and supported the global commodity markets, including oil. How much further oil prices can rally, however, is questionable.

Africa: The United States of Africa has pledged to commit $55bn to Africa over the next three years. According to White House national security adviser Jake Sullivan, the US is bringing “resources to the table,” and US commitment to invest in the African continent compares favourably to other countries. Sullivan also said Biden will host a dinner on Wednesday night for about 50 African leaders and announce US support for the African Union to join the Group of 20 (G20) major economies. He will also push for a permanent member from the African continent on the United Nations Security Council.

Kenya: Kenya is reportedly set to import 10mn bags of various foods, including maize, following limited harvests as the country experiences the worst drought in decades. According to local reports citing President William Ruto, the importation of foods is “to close the gap temporarily because the harvest was limited in this year’s agricultural season occasioned by climate change and failure of rain.” Last month the United Nations said it was seeking $472.6mn to support Kenya’s efforts in dealing with the worst drought. The UN expects the situation to likely worsen as the country faces a fifth consecutive below-average rain season from October to December. Forecasts indicate the possibility of a sixth poor rainfall from March to May.

Angola: Consumer price inflation in Angola slowed further in November, coming in at 15.24% y/y from 16.68% y/y in October. The November reading marked the slowest pace of price growth in the economy since January 2016. On a m/m basis consumer prices rose by 0.82% during the month. November marked the tenth consecutive month inflation has slowed and this has mainly been due to a firmer Angolan kwanza against the USD this year. The continued slowdown in the inflation rate will further widen Angola’s positive real interest rate, which will, in turn, continue to support the currency. Angola has one of the highest real interest rates at 4.26%.

Ghana: Finance Minister Ken Ofori-Atta on Tuesday said that Ghana will consider the Common Framework if it is assured that the process of reworking its debt obligations will be swift. Ghana has started debt talks this week with bilateral lenders and foreign investors. Chad, Ethiopia, and Zambia have applied for debt treatment under the Common Framework, with only Chad reaching a deal so far.

Rwanda: The International Monetary Fund has approved $319mn for Rwanda under a new financing arrangement aimed at helping countries deal with prolonged risks such as climate change. The lender, in a statement, said that the Resilience and Sustainability Facility was created this year for low-income and vulnerable middle-income countries to address the challenges with longer-term, low-cost financing. Rwanda is the first African country to secure the funding, and according to the IMF, “the RSF will support Rwanda’s ambitious agenda to build resilience to climate change and help catalyze further financing.” Moreover, the program will “facilitate green public investment, create further fiscal space, mitigate financial risks, and strengthen public debt dynamics and prospective balance-of-payments stability.”

Namibia: Namibia has signed an agreement with the German development bank, KfW, for $134mn of concessional loans for water and road infrastructure projects. According to a joint statement, the projects include a water reclamation plant to boost supplies to the capital Windhoek. Note that Namibia is water scarce, with more than 80% of the land area being desert or semi-desert.

Forex: Slow progress on debt restructuring is compounding pressure on the Zambia kwacha

The final quarter of 2022 has been one for the kwacha bears, with the currency having shed nearly 10.0% against the USD. That has seen the kwacha rank as the sixth worst-performing African currency against the USD on a quarter-to-date basis. Aside from demand for hard currency outweighing supply, the kwacha has been weighed down by subdued investor sentiment amid delays in the debt restructuring progress. Zambia has been struggling to strike a deal with diverse creditors ranging from holders of the country's $3bn in Eurobonds to Chinese lenders that account for about one-third of its public external liabilities of more than $17bn. 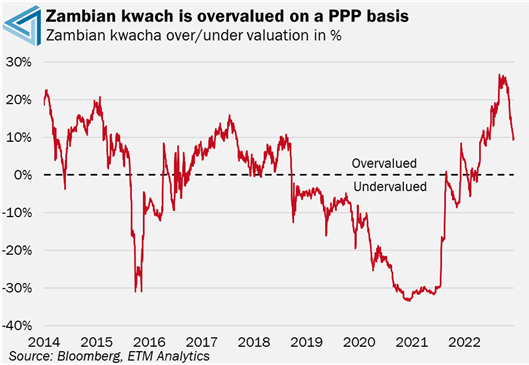 The World Bank recently said that Zambian creditors must make the next move in a two-year debt restructuring process that has already taken too long. The next milestone is for Zambia's official creditors' Committee to sign a memorandum of understanding laying out the key parameters of the restructuring. Each creditor will then implement the accord through bilateral deals.

While Zambia's real effective exchange rate has been trending downward, the kwacha remains overvalued. This suggests there is further room for the kwacha to weaken, especially given Zambia's current macroeconomic backdrop. There is yet to be certainty on how the debt will be restructured, and timelines have proved overambitious. Therefore, the kwacha will likely remain on the back foot in the final quarter of 2022.

Fixed Income: Ghanaian Eurobonds rally on news that the country has secured a staff-level agreement with the IMF

The big news on Tuesday was that Ghana had secured a staff-level agreement with the International Monetary Fund for a $3bn financial aid program. The IMF said in a statement released yesterday that the government’s strong reform program aims at restoring macroeconomic stability and debt sustainability while protecting the vulnerable, preserving financial stability, and laying the foundation for a strong and inclusive recovery. The international lender added that to support the objective of returning to a sustainable debt trajectory, the government has embarked on a comprehensive debt operation, which includes a debt restructuring. 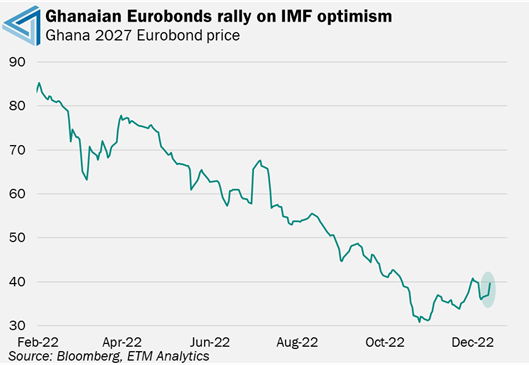 According to the IMF, in addition to the debt restructuring, the fiscal strategy includes a medium-term plan to generate additional revenue and advance reforms to bolster tax compliance. While the main objective is to improve the country’s fiscal position, the measure will help create space for growth-enhancing measures and social spending. Reducing inflation, enhancing resilience to external shocks, and improving market confidence are also important program priorities.

As was to be expected, Ghanaian Eurobonds rallied on the back of the news that the government has secured a staff-level agreement for a $3bn bailout from the IMF. Ghana’s 2027 Eurobond gained in excess of 7% on the session to outperform its peers. It must be noted however, that Ghanaian bonds would've also found support from the weaker-than-expected US CPI data, which bolstered bets for the FOMC to gear back on its pace of monetary policy tightening tomorrow night.

Macroeconomic: Major central banks are expected to scale back on the pace of tightening

The first of the final developed market central bank rate decisions for the year kicks off today. The Fed is expected to deliver its rate verdict today, followed by the BoE and ECB on Thursday. Expectations are for all three central banks to deliver a 50bps hike at their respective policy meetings. If this is the case and central banks provide less hawkish guidance, this will suggest a global monetary policy pivot is underway.

Fed speakers, including Chair Jerome Powell, have been signalling a slowdown in the pace of rate hikes amid mounting growth concerns and signs that inflation has peaked. However, the Fed has stressed that it is wary of pivoting too early as inflation remains elevated. However, the softer-than-expected US inflation figures released yesterday suggest that inflation pressures are easing. 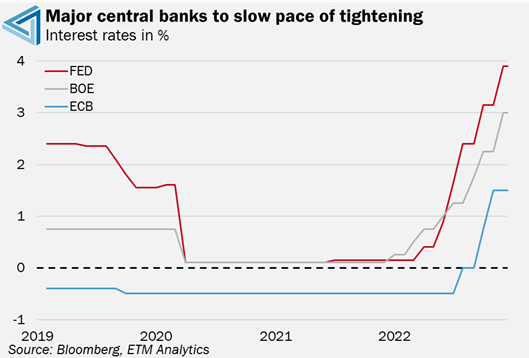 The ECB is also expected to ease its pace of tightening on Thursday. The slowdown is being aided by a less aggressive Fed and comes after inflation in the shared bloc cooled for the first time in a year and a half. Similarly, the Bank of England is also expected to deliver another 50bps hike, with the central bank reaching the end of its hiking cycle.

From Africa’s point of view, the less aggressive pace of policy tightening in the world's major markets should provide some relief for regional bonds and currencies. Moreover, a deceleration in the pace of tightening in core markets will take some pressure off central banks to provide more outsized rate hikes. A concern for many African central banks has been falling behind the curve of the likes of the Fed.