US, Europe, China: A Tripolar World hastened by the Russia-Ukraine War

The Tripolar World*, centered around the US, Europe and China, is still some way off. But the financial devastation visited upon Russia will accelerate a transition to tripolarity that will affect all other countries.

Short of Armageddon wars involving nuclear weapons, these are arguably the only three geopolitical blocs large enough that, should they come into conventional economic or military conflict, they would inflict sufficient mutual damage to create an incentive to avoid that conflict in the first place.

That does not mean there will be a cosy co-existence, particularly for China, as long as the US and EU are relatively aligned and China's economy is still reliant on exports to those two blocs. But it was only a couple of years ago that the US and EU relationship was weakening. Under a different US president or when Germany starts seriously re-arming, those interests could again diverge.

The implications for countries sitting beneath these three blocs is that, sooner or later, they may have to pick a side. In the US-USSR Cold War, smaller countries could play the two superpowers off each other because, in that Bipolar era, the two superpowers were economically disconnected. But going from the Globalisation era (cooperate for greater gain) to the Tripolar era (isolate for greater resilience) will involve reintroducing disconnection.

Long-term global growth is lower in a disconnected world: smaller addressable markets, more local regulation and customisation, and a higher cost of capital. And the adjustment from a connected to a disconnected world is inflationary: re-shoring from cheaper locations, less cheap immigrant labour, more segregated and duplicated supply chains, less sharing of the best technology.

And, at very short notice, sanctions can freeze a country. The social media court of public opinion can make a country unpalatably unethical in a matter of days, which matters in an era when customers like to think of themselves as ethical. And this applies not merely to the target country but to countries that continue to do business and be geopolitically aligned with that target country.

For global investors and multinational corporates, brought up on three decades of globalisation, this is going to be a very challenging shift.

Trump's 'America First' strategy and trade war tactics and China's Belt and Road provided a preview. The incredibly quick shut down of Russia for investors and corporates, at least those from the sanctioning countries, provides the first act of this story.

The silver lining for a portion of emerging markets is that a world that is more disconnected in terms of manufacturing supply chains and energy trade brings opportunities for those offering alternative low-cost manufacturing destinations in Asia and Africa and those offering the key commodities, like copper and lithium, needed for the transition to self-sufficient and renewable energy, in LatAm and Africa.

And a world where parking capital overseas is riskier might persuade more high-net-worth individuals to keep their wealth locally invested or repatriate it back 'home'.

We compare power (or vulnerability) across size, currency, trade, military, technology, economic self-reliance (based on internal consumption and fuel inputs), social stability and climate factors of these tripolar centres.

Global dominance by the 3 blocs

We also include a range of middle-size, or regional, powers to demonstrate the chasm between them and the three main power blocs. 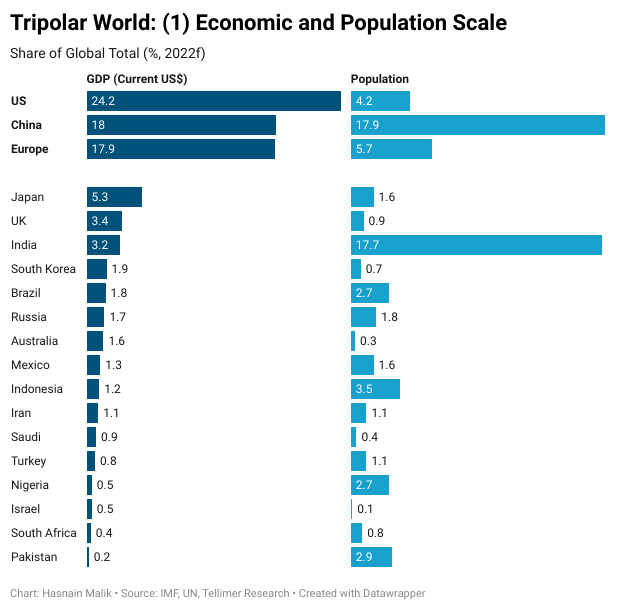 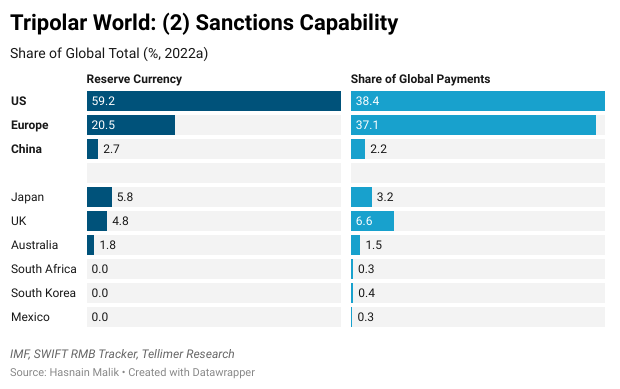 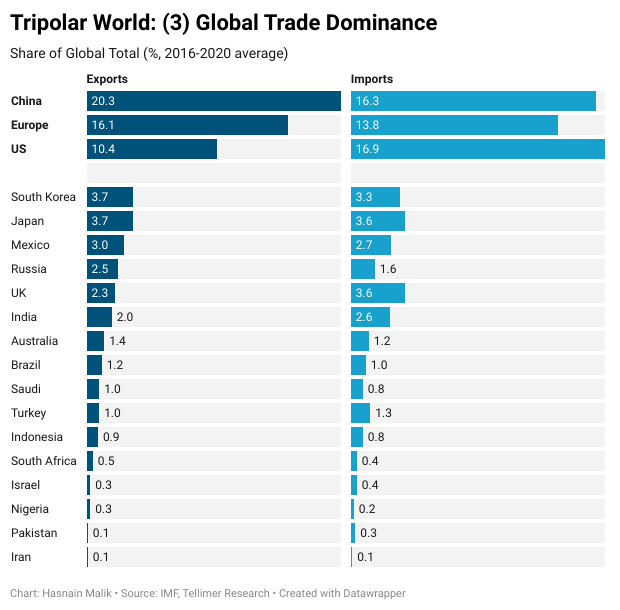 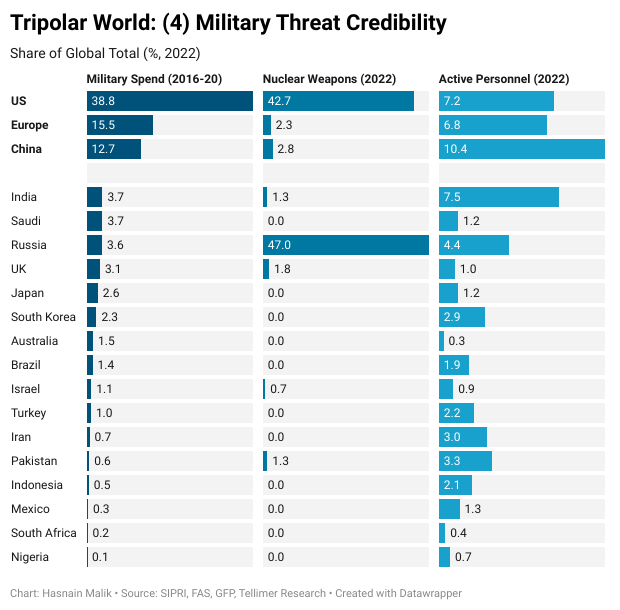 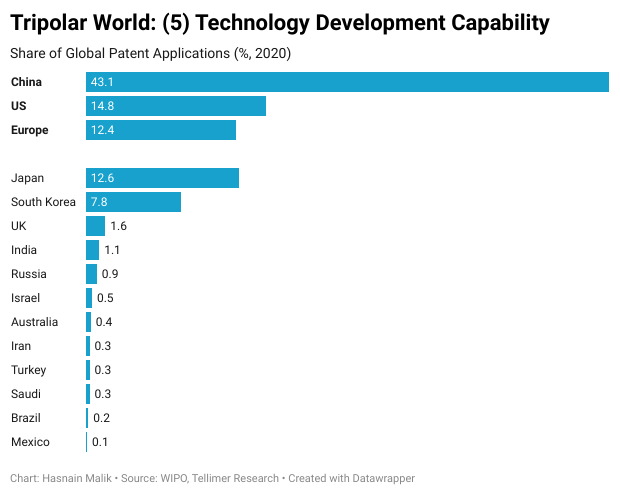 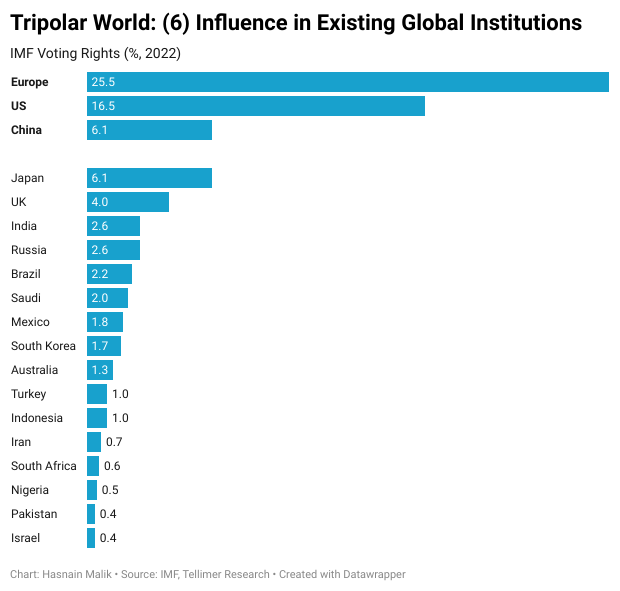 Relative resilience among the 3 blocs

In addition to the global scale metrics above, we compare the relative resilience of the three blocs as a subset in terms of economy (consumption-driven, low trade dependence, fuel independence), demographics, social stability (youth unemployment), technology innovation and climate risk (susceptibility to extreme weather).

Geopolitical outlook and risk in a Tripolar World

The US has re-established itself as a 'global policeman', using financial and trade sanctions much more than its overwhelming military power. Russia’s access to a 'war chest' of foreign reserves built up over six years of fiscal conservatism has been prohibited at a stroke.

For a while, the 'nuclear sanctions' that the US has deployed to stifle Russia may restore an international order where the US is the ultimate arbiter. There is still sufficient strength in its economy and currency to do so.

The two problems with 'nuclear sanctions' are as follows.

Europe – Reasserting the second pole, with the US for now

Germany, in a reversal of decades-old policy is re-arming and sending lethal hardware to a conflict zone. It is also in its interests to take on the difficult task of more assertively leading Europe.

That remains a difficult challenge both because of the European Union's institutional weaknesses (eg the principle of unanimity, the lack of coordinated fiscal policy within the eurozone) and the competition for that leadership with France.

In the face of the existential threat it faces from Russia, the interests of Europe are both internally united and aligned with those of the US.

But Europe's interests have not and will not always align with those of the US. It was only four years ago that, under Trump, the issues of the Iran Nuclear Deal, European defence, and China trade and investment were pulling Europe and the US apart.

Xi Jinping has already signaled he does not wish to be a part of the 'Western' alliance against Russia.

For now, he will continue building China up within the global system, exporting manufactured goods to US and European consumers, retaining foreign capital and technology inflows, and parking excess reserves in non-yuan currencies.

But the Russia precedent confirms its need to break away.

The moment its economy is driven more by domestic consumption than exports and the military-industrial complex is self-sufficient in terms of technology, it may be in a position to do. 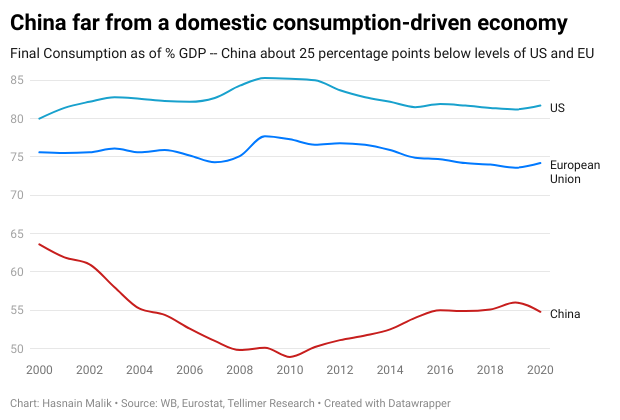 Terminal decline, due to persistent reliance on commodity exports, vulnerable borders, aging demographics, brain drain and succession risk has been reinforced. Russia has leveraged its local military superiority in many successes over the past 15 years in its 'buffer states'.

But, as a result of its difficulties on the ground militarily in Ukraine, the unification of a wide range of opposing powers against it and the implosion of its economy caused by the sanctions imposed by those powers, its credibility as a mid-size global power capable of projecting power beyond its borders is severely impaired. It no longer matters that Russia's economy and military is bigger than those on its periphery.

It also likely does not matter that Russia possesses nuclear weapons. Unless it is prepared to use them in a mutually destructive war then having a thousand weapons is no better than having one. And having one does not make you even close to a global superpower if you do not have the trade, financial, economic and technological strength to go along with it. Just look at the examples of Pakistan or North Korea, which are very hard to invade because of their nuclear weapons – but that does not give them the capability to project much power outside their own borders. 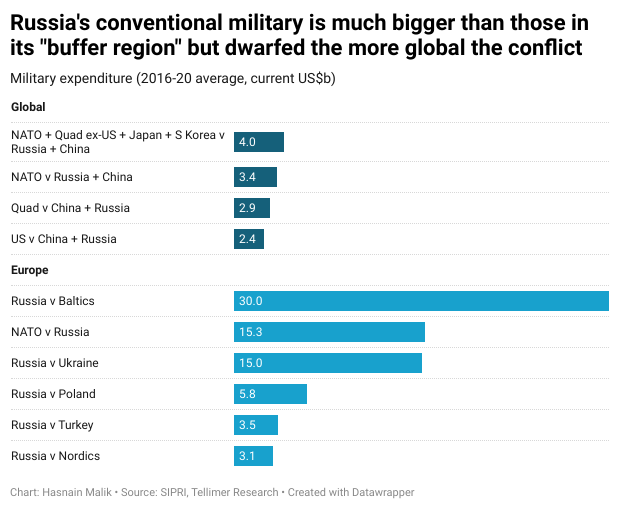 Japan – More assertive, aligned with the US, fearful of China

The Russia-Ukraine War has turned Japan towards a more confrontational foreign policy. Japan echoed US sanctions on the Russian central bank, has sent non-lethal military equipment to Ukraine, may implement sanctions on Russia gas imports and has publicly reiterated its claims of sovereignty over the Kuril Islands, which have been subject to a dispute with Russia, dating back to the Second World War.

This is the transition to tripolarity in action: Japan's actions are motivated by the fear that sanctions, which have led oil companies to withdraw from the Kuril Islands, will present an opportunity for Chinese companies to enter.

There is also a domestic political angle at play: Prime Minister Fumio Kishida is attempting to establish his own profile outside the shadow of his predecessor Shinzo Abe (who, by the way, is calling for an even greater shift to tripolarity by lobbying for Japan to host US nuclear weapons).

United Kingdom – Brexit shifts its pole to the US

Brexit and the efforts to establish even closer relations with the US have already demonstrated how the UK, at least under Prime Minister Boris Johnson and the Conservatives, sees its future in a tripolar world.

The UK's complete military alignment with the US in Ukraine confirms this and any sign of European division (either internally or from the US) will likely reinforce this.

In some respects, the UK represents the 'pivot state' choice in the transition to tripolarity faced by much of the rest of the world, given its spread of trading and financial reserves across the US (more of its foreign reserves sit in the US dollar than any other single currency), Europe (currently its largest trading partner) and China (on its way to becoming its largest source of imports).

Rest of the world – Decreasing space for the non-aligned

At the UN General Assembly at the start of March 2022, 27% of countries abstained, did not register a vote or opposed the resolution condemning the Russian invasion of Ukraine. 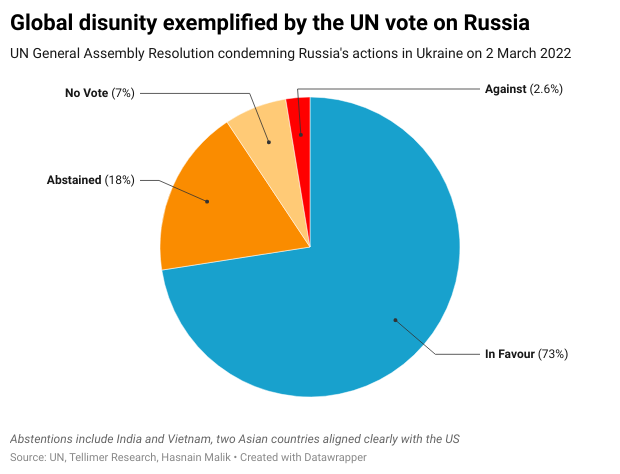 There will come a point in time and an issue or conflict – eg China-Taiwan, China-India, skirmishes between two middle-sized powers such as Turkey-Russia or Iran-Israel, the suppression of popular protests or minorities by authoritarian governments, or political assassinations – where the scope for not choosing sides, specifically not siding with the US, is too narrow.

And the US electoral cycle, eg from Obama to Trump, or from Trump to Biden, has demonstrated that where the US draws its geopolitical red lines and how it enforces those red lines is, by no measure, fixed.

The basis for choosing sides will not be the emotive, romantic notions of morality-based foreign policy, espoused by Biden and Blinken in the current US administration, but the pragmatic interests of realpolitik.

The same applies to investors looking at countries in this increasingly tripolar world – see When countries behave badly: The tortuous morality of ESG investing (March 2022). 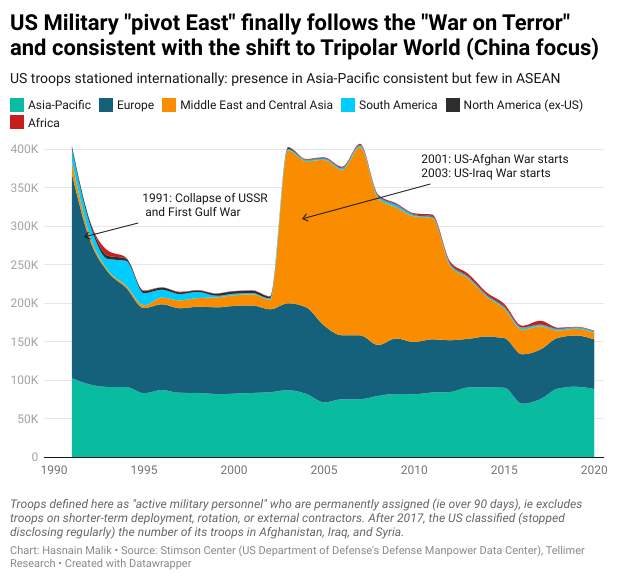