US economy: IMF warns over inflation risks but economy to avoid recession

The IMF published its concluding statement following the 2022 Article IV mission for the United States on 24 June, providing a timely update on the state of the US economy. In particular, it's the Fund's assessment of growth, inflation and monetary policy that will be of most interest to investors, although the discussion on structural reform, supply side measures and decarbonisation may also be of interest to some.

We expect the board review will be held in the coming weeks, which should be accompanied by publication of the detailed staff report.

The IMF has revised down its forecast for US real GDP growth this year to 2.9% from 3.7% in the April WEO, and to 1.7% in 2023 from 2.3%, due to the impact of cumulative monetary policy tightening in response to rising inflation. 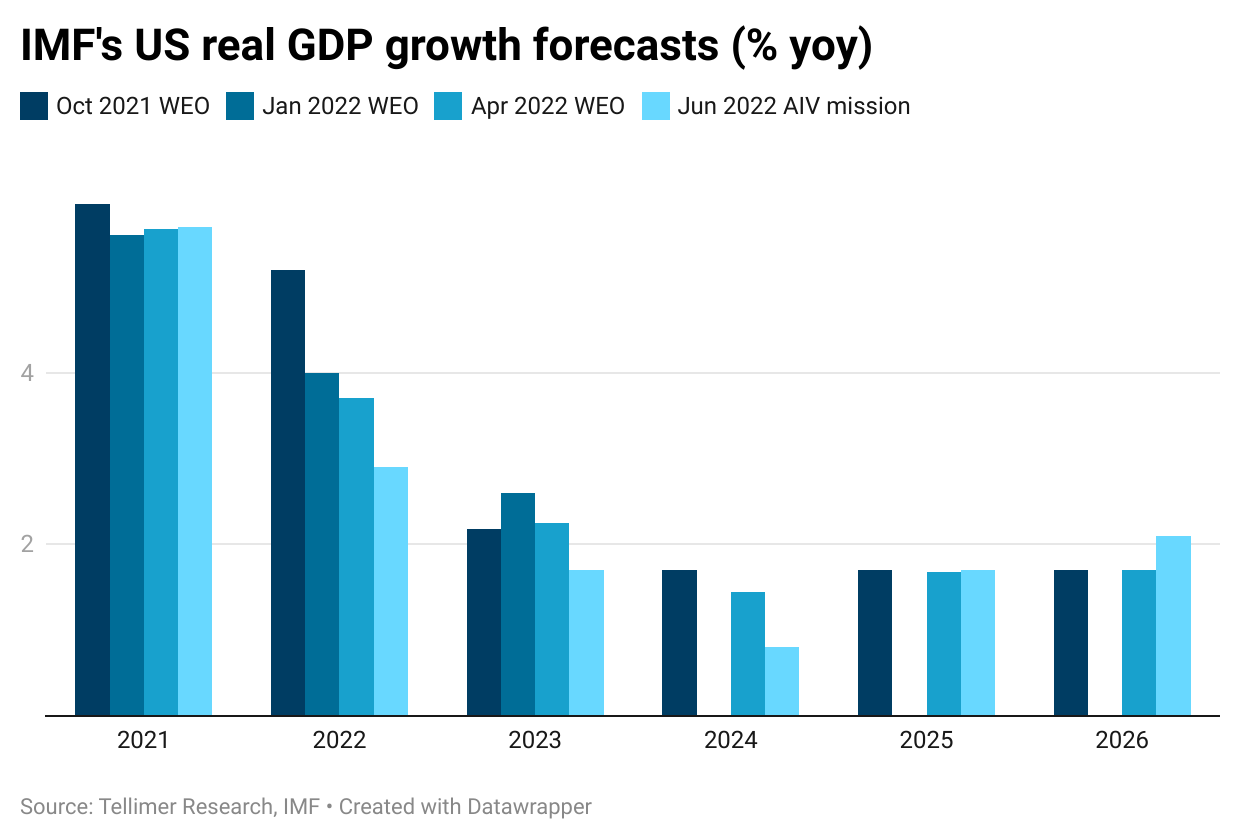 The IMF forecast is based on the Fed's own projection for the policy rate (the median rate published at the June FOMC meeting) rather than forecasting it itself. As such, it sees the Fed Funds rate rising to 3.4% by year end, currently with the target range at 1.50-1.75% after the 75bps hike earlier this month, and to 3.9% by end-2023, up from 0.1% at end-2021. This profile is broadly consistent with the Fed’s forward guidance of a terminal rate at close to 4%. However, this is more hawkish than is anticipated by the market (3.4% by year-end and 3.2% by the end of 2023).

The ten-year US bond yield is seen averaging 3.6% in Q4 and rising to 4.2% in Q4 2023, from 3.2% currently, which would seem bearish for EM financing conditions. The Bloomberg consensus forecast for US bond yields by contrast is more benign, remaining at around 3.2% this year and next.

But, despite the more hawkish interest rate path than the market, the IMF still expects the US narrowly to avoid recession. Real GDP growth falls to 1.7% in 2023 and to 0.8% in 2024, but the IMF forecast is suggestive of a soft landing (the quarterly path is not published). This comes as recessionary fears are gaining more traction in the market.

The IMF warns over the challenges posed by the broad-based surge in inflation, after more than a decade of below-target inflation, which it attributes to rapid depletion of slack, rising energy prices, and supply disruptions, while wage pressures are spreading across the economy. It noted that the "policy priority now must be to expeditiously slow wage and price growth without precipitating a recession". But it adds that this will be a "tricky task."

The Fund notes that returning to price stability will require “an assertive and rapid withdrawal” of monetary accommodation but suggests that the Fed’s signalling of a much tighter policy stance thus far has been appropriate. Indeed, it suggests more is to come. It notes that bringing inflation back to the target by late 2023/early 2024 will require raising the policy rate above neutral and keeping it there for some time, and implying that the Fed's forward guidance for the path of the federal funds rate that peaks at close to 4% is appropriate.

The IMF also makes some recommendations on how to improve the Fed’s communication of its monetary policy settings and objectives.

The IMF’s growth forecast differs from the Fed’s projections, for essentially the same interest rate profile (ie they must have different macro models). The IMF is more optimistic in the short run but perhaps more pessimistic over the medium term. The Fed sees growth slowing more sharply to 1.7% (compared to the IMF’s 2.9%) and while both institutions see 1.7% growth in 2023, the Fed expects 1.9% growth in 2024 (compared to the IMF’s 0.8%), based on the Fed’s median forecast (as published in the semi-annual monetary policy report to Congress on 17 June).

Hence, while the IMF forecast may ameliorate market concerns over a coming recession, its inflation and interest rate profile – and especially the outlook for US bond yields – may continue to weigh on EM investor sentiment. In addition, the sharp downward revisions to US growth will likely also have a material impact on EM growth prospects, especially in the western hemisphere countries.

Separately, the challenge for US monetary policy from higher inflation was spelt out clearly in a speech by Fed Board Governor Ms Bowman on 23 June. Inflation was “much too high” and showed little sign of moderating she said. CPI inflation rose to 8.6% yoy in May, while it was 6.3% yoy in April on the Fed’s preferred measure (the personal consumption expenditure (PCE) deflator). 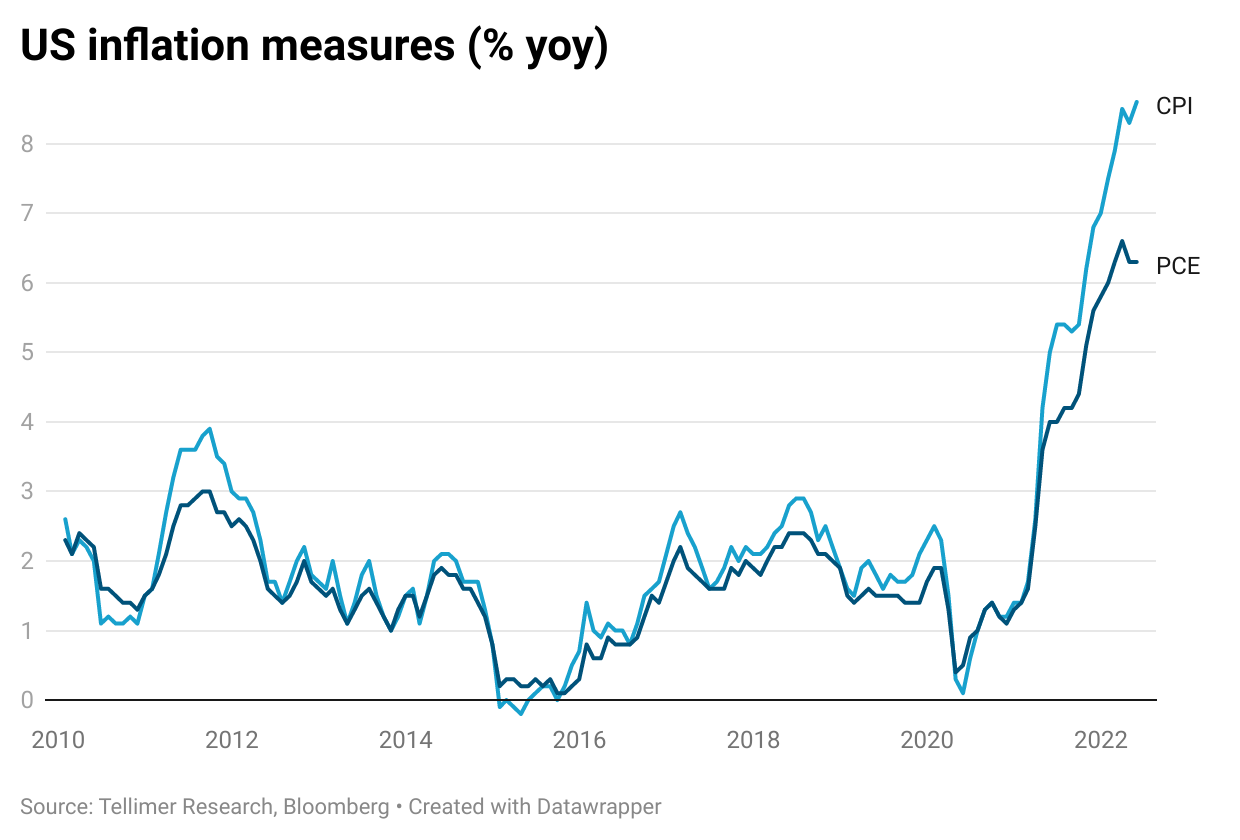 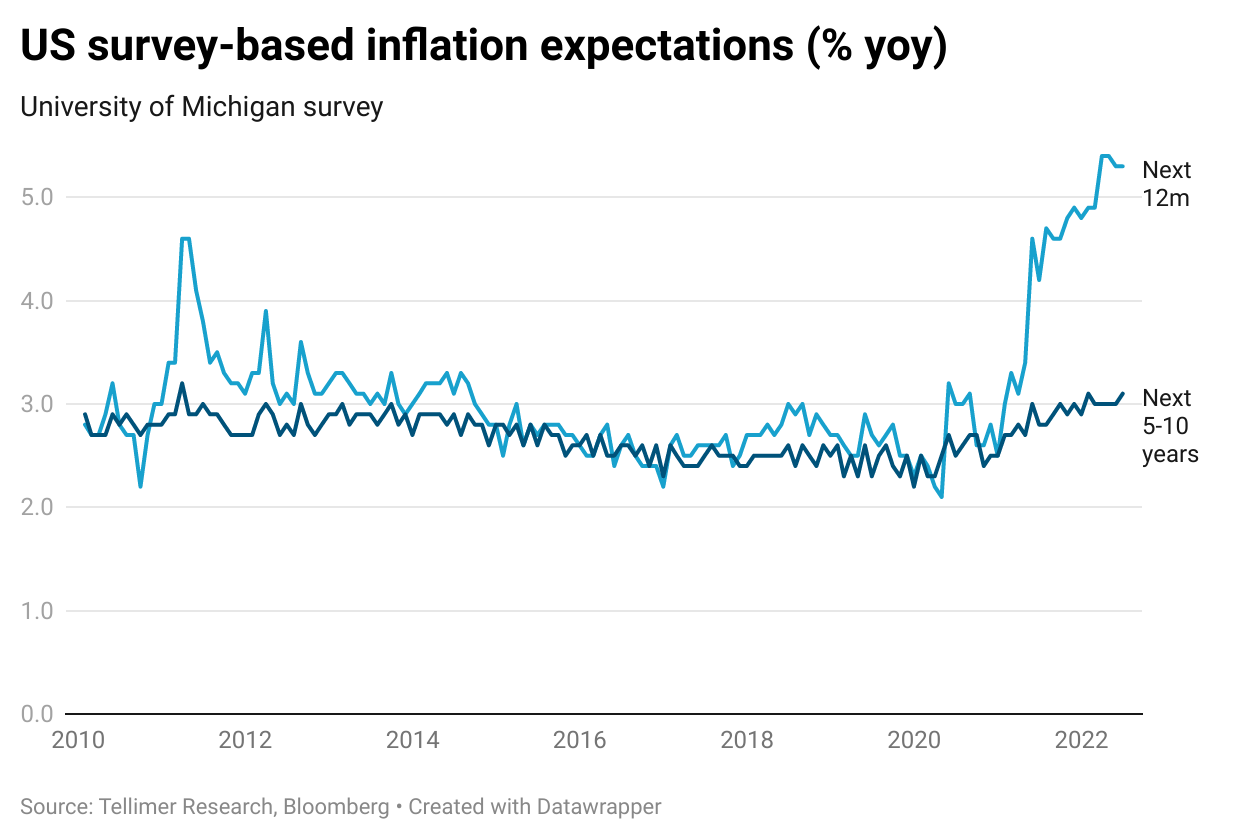 We observe however that market pricing of long-term inflation expectations is better contained (which may suggest investors have more confidence in the Fed than consumers). The 1yr breakeven is 4.75% and the 5yr is 2.85%, suggesting expectations for elevated inflation in coming years but both down sharply from March highs. 5yr5yr has also moderated from c2.6% in March to 2.3% currently, essentially being flat ytd. This suggests that longer-term inflation expectations are still well-anchored, albeit this is a bit surprising given the broader inflation narrative.

Still, Bowman expected a further 75bps hike at the Fed’s next meeting and at least 50bps in subsequent coming meetings, depending on the data, which seems to be in line with the market after its recent rate re-assessment and Fed forward guidance.