Oil prices declined for a third straight session yesterday, with recession concerns exacerbated by hawkish Federal Reserve meeting minutes driving the commodity lower. Brent has dropped below $92.50 per barrel as a result, sliding back below some key technical levels that include the 50DMA at $93.8184. This keeps the door open for prices to weaken further, with the $90 handle now looking to be the next major support level to watch. Another factor pressuring prices at the moment is the build-up of inventories in the US. API data out yesterday showed a massive 7mn barrel increase in stockpiles nationwide. If confirmed by the official government data today, we could see oil back under pressure into the final sessions of the week.

On the news front, world leaders will continue to hold discussions surrounding imposing a price cap on Russian crude over the coming weeks. Some US officials, however, have warned against this measure, suggesting it could backfire. Following OPEC+’s 2mn barrels per day output cut last week, there are concerns that a price cap could cause a spike in prices due to current market volatility.

Ethiopia: As part of efforts to encourage foreign direct investment into the country, Ethiopia is reportedly planning to allow foreign banks to acquire up to 30% of its commercial banks. A draft by Ethiopia’s Council of Ministers circulated to domestic lenders and seen by Bloomberg stipulates the amount of equity foreigners can purchase. The document comes after the government recently announced plans to ease restrictions on bank ownership. Ethiopia requires foreign investment to support growth that has been hurt by the war in Tigray region.

Morocco: The Chief Executive Officer of OCP, Morocco’s state-controlled phosphate monopoly, yesterday said that the firm plans to double exports of phosphate fertilizers to other African countries. According to the CEO, OCP will work with international and regional institutions on the plan that targets 40mn farmers in 40 countries. Furthermore, the plan will involve 4mn tons of “customized phosphate-based” fertilizers which is twice the “usual” volume of OCP’s exports to Africa and aims to feed one billion Africans by boosting farm output.

Uganda: Economic growth in Uganda slowed to 4.90% y/y in Q2 from 5.9% y/y in Q1. The Q2 GDP reading was the softest since Q3 2021, and going forward further downside risks are present. These include higher domestic interest rates, declining private sector credit, constrained demand for Uganda’s exports, tightening global financial conditions, and risk of a global recession.

Uganda: Uganda is seeking investment in a Nuclear Plant that may cost as much as $9bn as it moves to boost electricity generation. The plant would be the first in East Africa, and the government is working with China, Russia, and the US as it seeks investors, according to an Energy Ministry official. The official added that the construction of the 2,000 megawatt plant, which could be operational by 2031, may occur in two phases due to the expected costs. Uganda relies heavily on hydropower and is trying to diversify its generation mix. The official also noted that Uganda is also seeking investors for geothermal generation. According to the government, generation from other sources will help bridge the expected spike in energy demand by 2040.

Zambia: Finance Minister Situmbeko Musokotwane has urged other African countries to consider using the G-20 Common Framework mechanism to restructure unaffordable debt to act quickly. According to Musokotwane, while progress has been slow, the Common Framework is the best option for governments of poor countries. In recent weeks, Nigeria and Ghana have announced they’re considering revamping their liabilities. Rising interest rates and a surging dollar may push more nations into default as they struggle to pay for fuel and food imports.

Botswana: It is clear that the global economy is slowing, with Europe facing its own economic troubles due to an energy crisis and the war in Ukraine. Over in the US, the effects of aggressive Fed tightening are set to dampen the recovery momentum. In the case of Botswana, economic growth, although robust, is also losing some momentum. The nation’s budget is largely dependent on mining, particularly diamonds, as well as tourism, both of which rely on the performance of the US and Europe. Botswana has run budget deficits for the past six years and has seen reserves further ruined by COVID-19, the uncertainties in the global economy could not come at a worse time. The country’s ageing diamond mines and fluctuating revenue from the Southern African Customs Union (SACU) is a concern. All of these point to a gradual decline in revenue over the years, while expenditure, including inflation, public service wage increases, the pandemic and other priorities, have been rising. If global conditions worsen, Botswana will not be able to draw down on its reserves and will need to seek alternative ways to finance the deficits. Between the 2013 and 2019 financial years, public debt as a percentage of GDP averaged 21.50%, but this is estimated to rise to 21.255% this year, according to Bloomberg forecasts, before easing to 19.627% in 2023.

Official government data showed that Nigeria’s oil output continued to fall in September as some onshore production almost halted. Specifically, Nigeria produced a daily average of 1.14mn barrels of crude oil and condensate in September, about 42,000 barrels fewer than in August. Data from the Nigerian Upstream Petroleum Regulatory Commission also shows that output has declined steadily since Q1 of 2020 when Nigeria produced roughly double the amount. The Nigerian government has attributed the lower output to rampant theft and vandalism on pipelines that crisscross the Nigeria delta. 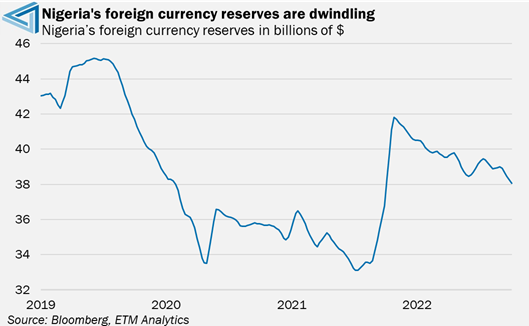 The lower oil output has meant that Nigeria has been unable to take advantage of the windfall of higher-than-expected oil prices to boost foreign currency earnings. For context, the crude oil price in September averaged $90 per barrel, which is higher than the Federal Government’s benchmark of $62 per barrel this year. Lower oil earnings have meant Nigeria has been unable to bolster its foreign currency reserves which have come under pressure due to continued central bank intervention to prop up the naira. Nigeria’s foreign currency reserves have dropped by more than 5% since the beginning of the year.

With oil output continuing to dwindle, pressuring foreign currency reserves, and dollar shortages worsening, risks remain to the downside for the naira. The naira in the official market has lost over 3% against the dollar on a year-to-date basis and repeatedly weakened to fresh lows this year.

Fixed Income: US CPI to dictate bond market directionality in the session ahead

Given prevailing uncertainty around the Fed’s policy outlook, no economic data matters more these days than US CPI numbers. Consensus expectations as per Bloomberg surveys are for a drop in US CPI growth from 8.3% y/y to 8.1% y/y in September, although the month-on-month and core CPI prints are expected to show an accelerated rate of price growth. Moreover, recall that the market has been burnt time and time again when pricing in the peak of the current inflation episode, with price pressures remaining both widespread and extremely strong. 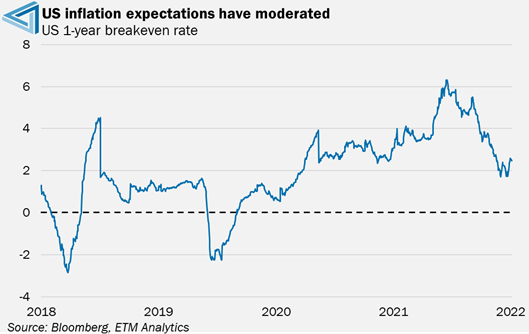 Some cautiousness is thus warranted, with the Fed also maintaining a hawkish policy outlook, notwithstanding the September meeting minutes published overnight that suggested that policymakers considered reducing the pace of rate hikes, as it plays catch-up to inflation. The CPI data may determine whether the Fed delivers a fourth consecutive outsized rate hike at its next meeting, which would pile pressure on an already struggling global economy.

Macroeconomic: Headline inflation in Ghana surges to a series high

Inflation pressures in Ghana are acute as the currency crisis continues. Coming in at a series high, headline inflation accelerated to 37.2% y/y in September from 33.9% y/y in August, partly driven by persistent currency weakness. The cedi has weakened around 42% on a year-to-date basis against the dollar fuelling inflation as it makes imports more expensive. The cedi is the worst-performing African currency this year, and risks for further depreciation in the cedi are robust. 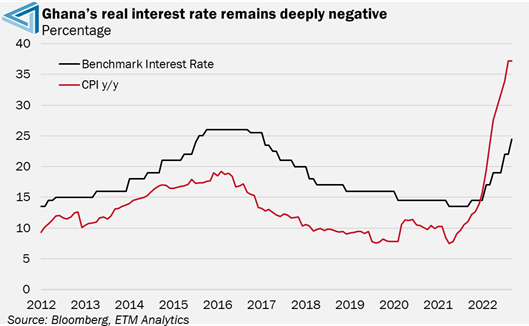 Oil prices are back above $90/ barrel as OPEC+ announced a production cut, which will continue to fuel external price pressures. The risks are that there are more production cuts still to come, which will result in oil prices remaining lofty in the months ahead. There is however some positive news for consumers in Ghana, and that is the moderation in global food prices, which could offset some of the inflation impacts that are being caused by high fuel prices and persistent currency weakness.

Looking ahead, inflation in Ghana is expected to remain strong in the months ahead, as currency weakness persists amid the ongoing fiscal crisis. It is worth mentioning that Ghana has changed the way it calculates inflation, which may impact inflation going forward. Specifically, the stats agency changed the reference year to 2021 from 2018.