Today's inflation data is arguably the most important data event of the week. It is a major consideration for the Fed and will therefore hold market-moving potential. Consumer inflation in the US is expected to have moderated slightly from the surge seen in July. Price pressures within reopening-sensitive sectors are easing as the economy is slowly normalising, but certain categories such as used vehicles and rents will keep the headline elevated over the next few months. Given the sensitivity of global markets to inflation at the moment, any surprises in the data will be market moving. A miss will increase bets that the Fed will delay the tapering of its bond-buying programme, while conversely, any higher than expected numbers will see bets increase that tapering will happen before the end of this year.

Not much change to the USD that continued to trade in a tight range ahead of today's CPI reading. Directional momentum is weak, and a fresh catalyst is needed. Equity markets are a little stronger today, and risk aversion has subsided, which has dampened some of the bid for USDs. Technical indicators are not favouring much direction either, leaving investors on the sidelines until the CPI data is released to offer something to trade on.

In the commodity maket, the big outperformer for the moment remains aluminium which topped $3000/tonne yesterday. Granted the metal finished down on the day but there are massive concerns brewing as to the availability of the metal given the coup in Guinea and the output curbs enacted by Beijing.         Looking at the day ahead much will depend on the US inflation release which will adjust the outlook on the timing for the US taper which has underpinned much of the rise in base metals as the world regroups following the hard lockdowns related to COVID-19

Africa: A number of substantial companies have appealed to the UK Prime Minister Boris Johnson to ease the travel restrictions that the UK has in place with southern Africa saying that it is hampering trade. A lobby group including the South African units of BMW, JPMorgan, Old Mutual and Total were amongst the signatories of the business letter to the Prime Minister. The letter stated that the limit of movement is jeopardising the competitive advantage the UK has, which stem from its historical, cultural and economic links with Africa. Tourism in the region has taken a severe hit from being on the UK red list as it makes travel extremely cumbersome. Equally business travelers have steered clear of the region given the need to quarantine on return to the UK.

Zambia: In its Q2 economic report released yesterday, Zambia's finance ministry reported that the country's arrears for external debt principal and interest payments increased to $1.48bn by June 30 from $841mn at the end of December. The government's stock of verified domestic arrears, excluding value-added tax refunds and salaries, rose 27% to $ 30.6bn kwacha in Q1, with the increase mainly due to capital and road project-related arrears. Meanwhile, Zambia's external debt rose to 1.3% to $12.9bn in the six months through to June and was on account of continued disbursements for some priority projects. Revenue and grants in the first half of 2021 estimated at ZMW 50.7bn, beat the budget target by 46% while spending including amortisation was 11.4% above target at ZMW 64.3bn.

Angola: State-owned oil company Sonangol reported that it recorded a net loss of $3bn 2020. According to the company, the net loss resulted from a "drastic reduction in revenue from sales of crude oil and a high level of impairments due to a reduction in oil prices. The loss was the biggest in at least ten years and compared with a net income of $125mn in 2019. Angola, which relies on oil for more than 90% of its exports, has been struggling to recover from the 2014-2016 collapse in prices. It has also not been able to boost investments needed to increase production from its aging fields. For about two months in 2020, none of the company's rigs were producing oil.

Egypt: A poll conducted by Reuters showed that Egypt's central bank is likely to leave its overnight interest rates unchanged at its meeting this week as inflation ticks higher amid rebounding economic growth.  All 19 analysts surveyed expect the CBE to keep rates unchanged at its regular monetary policy committee meeting. The lending rate has been at 9.25% and the deposit rate at 8.25% since November, their lowest since July 2014.

Ethiopia: Ethiopia and Kenya are set to conclude guidelines for a $1.3bn power project, according to Ethiopian Energy Minister Seleshi Bekele. Bekele yesterday said that the governments were drafting an agreement on construction, operation guidelines for power interconnection infrastructure. The minister added that the project is set to facilitate regional integration and that the technical teams will conclude the drafting of the Ethio-Kenya energy interconnection.

Uganda: Uganda National Meteorological Authority has forecast the country to receive near-normal to below-average rainfall from September through December, which coffee authorities say may hurt the quality of beans and output volumes. According to the UNMA, "there is a high expectation for poor rainfall over most parts of the country during this season. However, from September to mid-October, the rainfall performance is expected to be enhanced." The forecast comes at a critical time when the harvest north of the Equator is due to begin. Low rainfall may hurt bean sizes and volumes and potentially reduce the amount of foreign exchange Uganda could earn from exports.

South Africa: StatsSA today will finally release the mining data for June as well as July, providing the final piece needed to update SA's Q2 GDP numbers, which were recently released using provisional estimates of the sector's output. Even if the figures alter the Q2 GDP figures, not much attention will be paid to the June release, given how dated they are now. Meanwhile, the July figures will provide further evidence into the impact of the civil unrest in the country, although the sector should have escaped largely unscathed.

Given the impact of monetary policy on the currency market, it is worth having a look at the latest inflation data out of Angola. Data from the Instituto Nacional de Estatistica showed that headline inflation in Angola accelerated further in August, coming in at 26.09% y/y from 25.72% y/y in the month prior. This was the fastest pace of price growth in the economy since 2017 and marked the fifth straight month inflation has risen. On a month-on-month basis, inflation rose to 2.13% from 2.10% in July. Food and non-alcoholic beverage prices, the biggest contributor to headline inflation, rose by 2.67% in August. Meanwhile, inflation in the province of Luanda rose to 29.67% y/y, the highest since June 2017 from 29.29% y/y in the month prior. 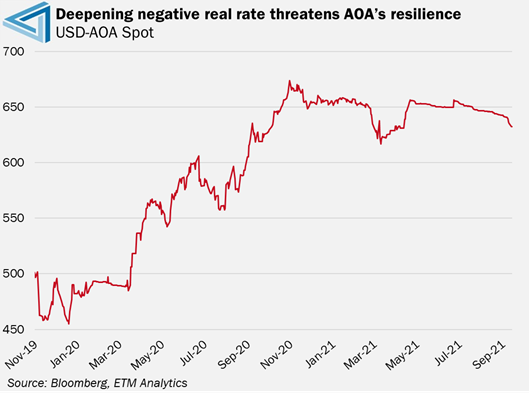 Policymakers at the Bank of Angola see the risks to the inflation outlook as tilted to the upside. With the headline number likely to remain buoyed above the central bank’s target of 19.5%, the possibility for further tightening to materialise towards the end of the year exists.

For now, the surge in inflation has seen Angola’s real rate (Policy rate – CPI) move deeper into negative territory to -6.09%. From a currency perspective, this poses a headwind to the resilience of the Angolan Kwacha (AOA). While the AOA has traded on the front foot on a month-to-date basis, up by 1.59% against the USD to be Africa’s third-best performing currency, a persisting negative real rate could detract from recent gains in the near-term. Note that the broader bias in the AOA remains decisively bearish.

The South African bond market has suffered a mass exodus of foreign funds in 2021. According to JSE data compiled by Bloomberg, foreign investment outflows from South Africa’s government-bond (SAGB) market this year have already exceeded any full year on record driven by mounting concerns over the country’s budget shortfall and ballooning debt pile. 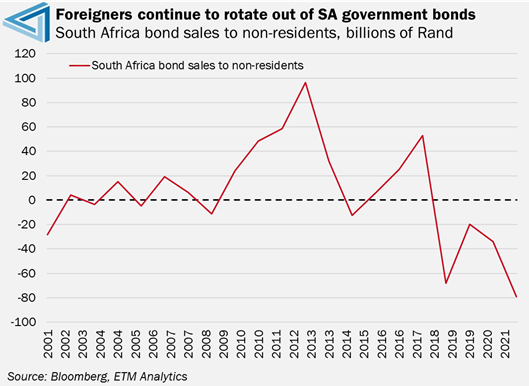 Specifically, net bond sales to non-resident reached -R75.8bn or around -$5.3bn in the year through September 10. This is already twice the net sales in 2020 and is greater than the previous record outflow of R68bn in 2018. On the back of the rotation out of SAGBs by foreigners, SAGB yields have risen on a year-to-date basis. For context, the benchmark 2030 bond yield has climbed 14bps to sit at 8.89%, putting it amongst the highest emerging market yields.

Going forward, SA’s fiscal risks remain tilted firmly to the upside, and international risk appetite remains on edge given all the lingering uncertainty pertaining to the COVID-19 pandemic and concerns that the Fed will begin normalising monetary policy in the months ahead. As such, we are likely to see the percentage of non-resident SAGB ownership decline further in the months ahead despite the attractive yields on offer. That is unless we see the government implement significant fiscal reforms, which at this current juncture seems unlikely.

Notwithstanding the financial market ructions in China and Brazil, investors pumped cash into emerging market exchange traded funds for a third straight week last week. Bloomberg data released on Monday afternoon showed that inflows into US-listed ETFs that invest in emerging markets stood at $792.6mn in the week ended September 10. Last week’s inflows brought the year-to-date additions to emerging market ETFs to $37.4bn. Note that this compares to an addition of only $2.47bn in all of 2020.

A breakdown of the data showed that ETFs that invest in emerging market stocks received $763.7mn last week. Underpinning the flow of funds into emerging-market equities has been signs of a weaker dollar amid mounting fiscal concerns and expectations that the policy normalisation could be pushed out. Emerging market bond ETFs meanwhile recorded a far less pronounced inflow of $28.9mn last week. Note that low interest rates across developed market nations has detracted from the attractiveness of fixed income assets.

In Africa, ETFs that invest in South African assets recorded the largest net inflow last week. Specifically, investors added $7.2mn to SA ETFs with the bulk of that going into equities. Inflows into other African nations were relatively muted in the week ending September 10. Egyptian ETFs listed in the US expanded by $0.7mn, while ETFs focussed on Senegal, Zambia and Ivory Coast rose by $0.1mn. ETFs that focus on Kenya and Morocco meanwhile contracted last week.