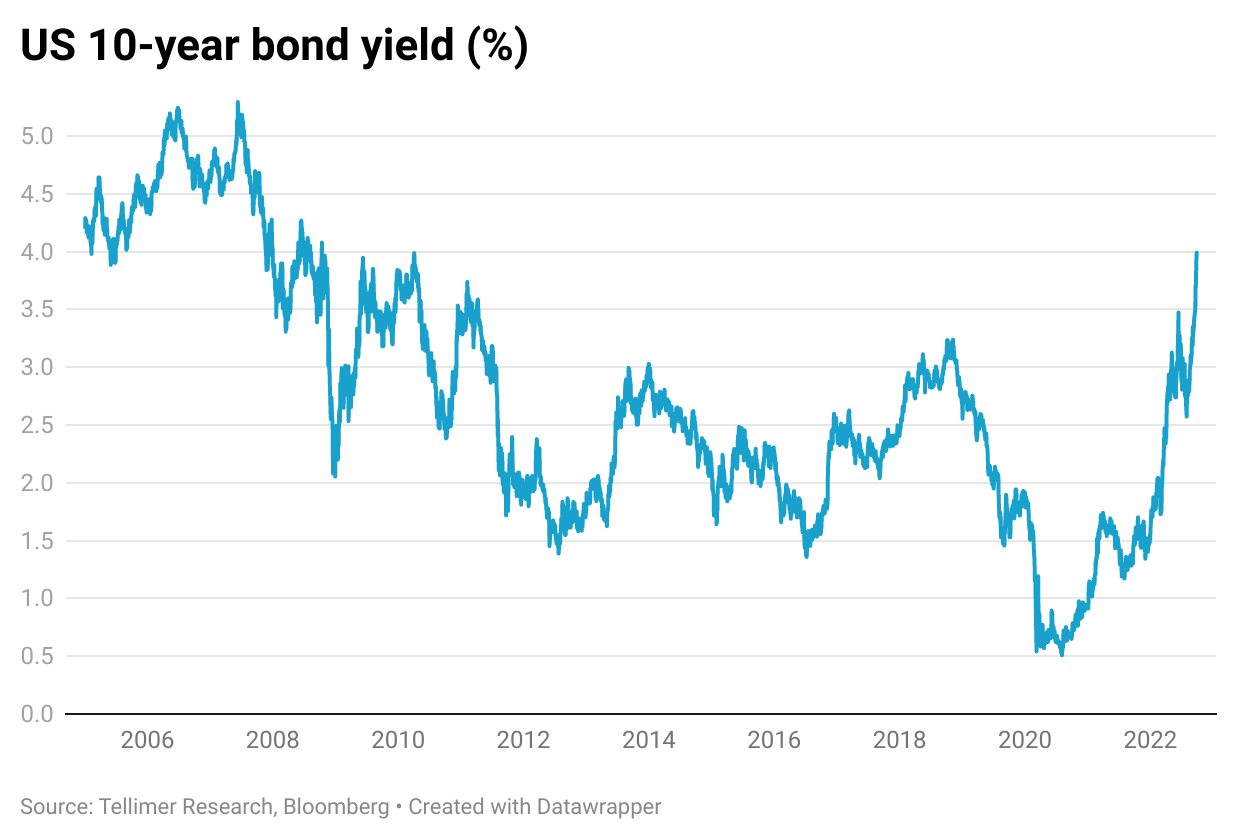 The sell-off in UST has been dramatic. Recall it is not that long ago that yields reached 3% (back in April). And it was only in February that the 10-year hit 2%. What next? 5%?

Yields have risen c140bps (150bps on an intraday low to high basis) since early August, after the early summer rally (which saw ten-year yields fall to 2.6% from 3.4%) and have risen by a staggering c250bps this year.

Indeed, the recent leg of the sell-off has been particularly violent. On our calculations, the 140bps move (142 to be precise) over just about two months (42 days) is the sharpest increase over such a timeframe over at least the last 17 years. 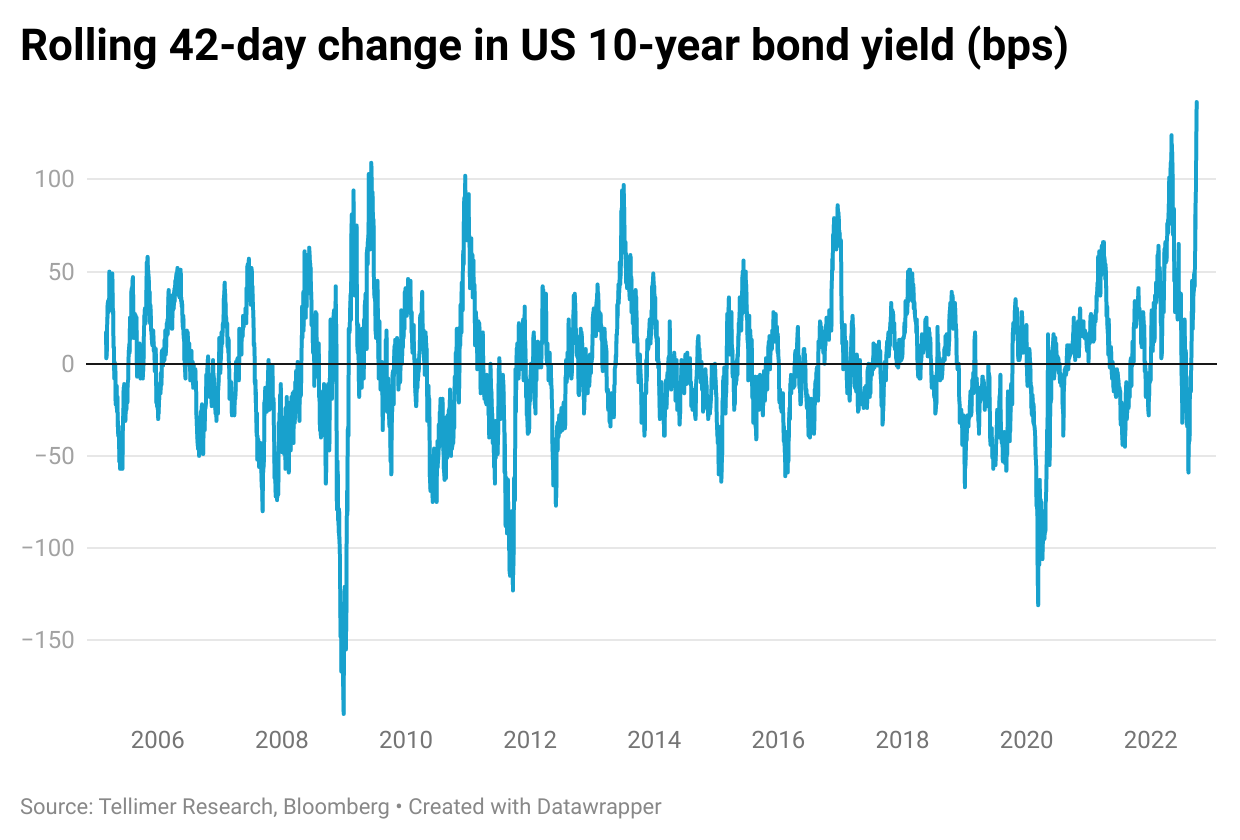 The further declines follow hawkish comments at an investor conference from St Louis Fed President James Bullard, market speculation about Japanese FX intervention via sales of its UST holdings to support the Yen, and concerns that other countries may copy the UK's huge go-for-growth unfunded tax cuts announced last week, raising fiscal deficits and potentially needing even higher global interest rates (although sterling's reaction – and the IMF's overnight shot across the bow to the UK government – may serve as a warning to others against such an approach).

Markets are now pricing a peak Fed funds rate of 4.4% in March, which is broadly in line with forward guidance after market pricing fell behind the curve in recent months, but if inflation surprises to upside or disinflation is slower than expected then there is a risk that FFR has to go above 4.5%, to maybe 5% or above, which markets are presumably not yet positioned for and could push the 10yr up even more (assuming the yield curve doesn't just invert even further)

The rising yield environment will continue to put EM bonds under pressure. EM sovereign bonds are down c6% on a total return basis this month so far (to 27 September), already the third worst month this year (and still with a few days to go), and -23.3% YTD, according to the Bloomberg EM Sovereign USD index.

The EM spread is 447bps (giving a nominal EM yield of 8.63%), up 13bps this month, but surprisingly down 15bps over the same 42-day period since early August. And, at just 110bps higher this year, the rise in the spread has arguably been more contained. However, it is not clear if – in the face of such a sustained adjustment to global rates, and concomitant deterioration in EM funding conditions – that spreads can remain so well behaved (and raising questions if they don't).

Still, by comparison, when USTs were last near 4% in 2010, the EM spread was only c220bps (and nominal EM yields were sub-6%), about half what they are now, presumably as risk assets benefitted from the post-GFC policy stimulus (which is no longer available). Meanwhile, EM credit fundamentals were arguably better then, which could have merited a lower country risk premium; for instance, public debt was much lower than it is now, with debt/GDP at about 37% compared to nearly 70% today (based on IMF WEO data). The composition of the index itself has also changed a lot since then, especially with the rise of frontier issuance. 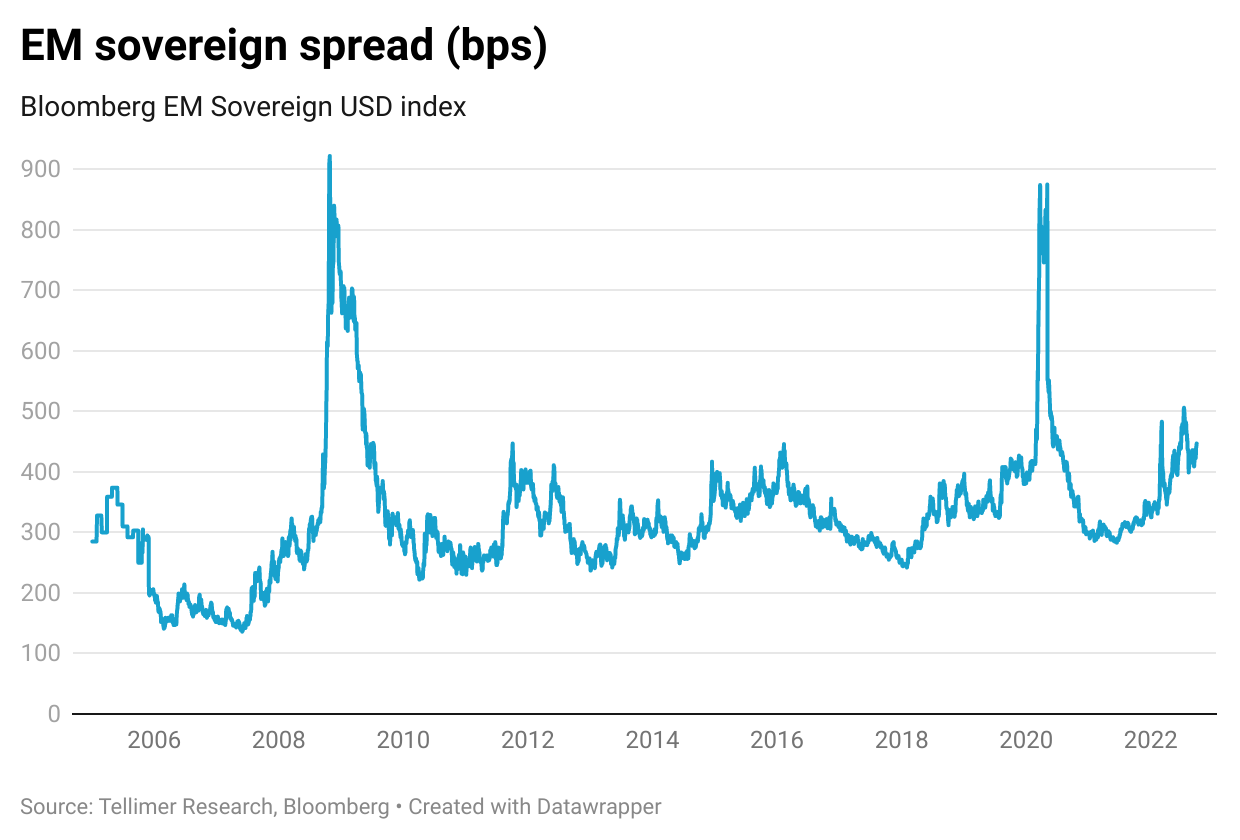 The rise in EM yields this year (up c380bps) increases refinancing risks for many, particularly smaller EM and frontiers. Most HY countries are effectively locked out the market. This could force more countries to the IMF (and other multilateral lenders), as Ghana has, or to bilateral partners, or lead them to consider more creative financing structures (like The Bahamas), or they will be forced to tighten policies, resort to potentially inflationary domestic financing, sharp exchange rate adjustments, capital controls or – in the limit – default, amid more vocal calls from some quarters for a new round of international debt relief (which could add an additional premium to sovereign bonds, especially among low income countries, like we saw in DSSI).