Ukraine launched a consent solicitation on Wednesday (20 July) seeking to postpone eurobond payments for two years, subject to bondholder approval. According to reports, Ukraine intends to postpone principal and interest payments for 24 months from 1 August, although in essence it is a two year maturity extension across all its bonds. The proposal also includes changes to the GDP warrants. The consent solicitation expires on 9 August (unless extended) and results are due on 10 August.

A statement by the Ministry of Finance announcing what it terms a liability management operation can be found here.

The announcement should come as no real surprise, amid increasing concern about a likely default ahead of the 1 September eurobond maturity (such concerns saw the UKRAIN 09/22s fall into the low 40s last week, and close at US$37 on 13 July, although they did jump to US$47 by the end of the week). It comes hot on the heels of Naftogaz's similar proposal last week, which investors thought at the time might provide a template for the government's own plans on the eurobonds. The one surprise, however, is that the government's announcement has come so soon after last week (we thought it may take a little longer).

That said, the price action this week suggests some degree of surprise among market participants. That the '22s jumped to US$47 last Friday and US$50 on Monday this week, from below 40, might reflect some misplaced optimism that the government would soften its position, and pay the bond, in light of reports that Nafto bondhlolders might reject its proposal. As a result, the UKRAIN 09/22s have in fact fallen sharply since Tuesday, when reports of the government's deferral plan began to surface, with the bonds indicated at US$33 as of cob 20 July on Bloomberg (mid-price basis).

However, unlike Naftogaz, whose consent solicitation for a two-year deferral seemingly caught bondholders off guard and may, as a result, fail to get enough support (the voting deadline is today 21 July) – blaming poor communication – few investors will be surprised by the government's announcement on Wednesday. On the contrary, the surprise is how (and why) Ukraine has remained current for so long and not sought a debt standstill sooner. As such, we doubt there would be much resistance to a standstill (the resistance may come later, with what happens next). Indeed, in its statement, the Ministry of Finance said it had already discussed its liability management plans with a number of investors, and had their support, which we believe will help build the necessary majority to approve its request. 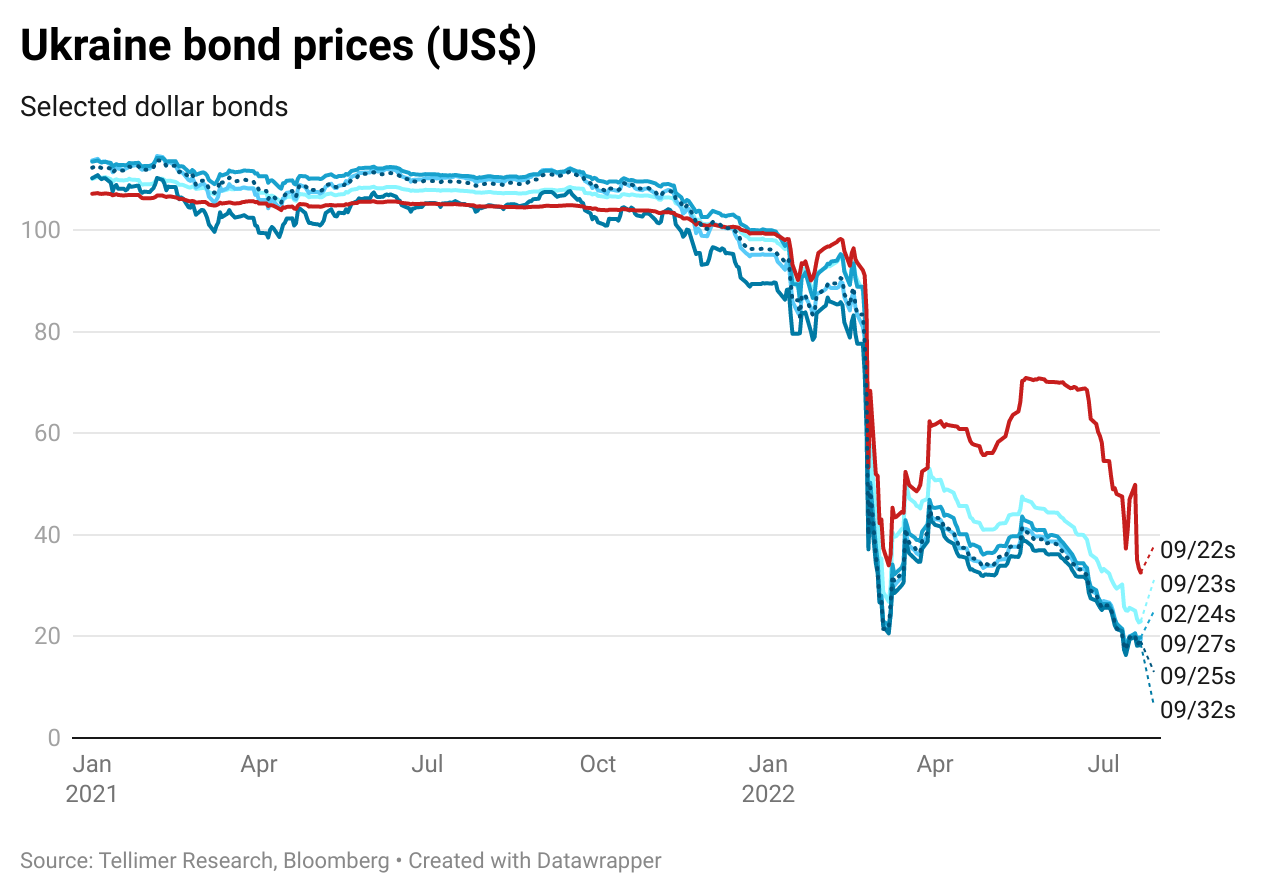 In essence, the consent solicitation seeks a two year maturity extension across all its bonded debt, and pushes back all principal and interest payments by two years, perhaps with an eye on ease and inter-creditor equity (across bondholders), rather than just deferring principal (and interest) falling due over the next two years and keeping all subsequent maturities (and coupons) as they were.

As such, we understand the consent solicitation seeks to defer the maturity date of each bond to the date, which is twenty-four months after the original maturity date of the relevant bond, except for the amortising 2032s, for which each amortisation date (there are four semi-annual payments in the last two years) is deferred to the date which is 24 months after the relevant original amortisation date.

What this means in practice, for each bond, will vary by bond (according to its maturity), although bonds that should have matured during the deferral period pose more interesting questions. So to illustrate, we presume the September 2022s would turn into a two-year bond maturing in September 2024, although we are not sure if just the one final coupon will be deferred until then (accruing interest on interest), or if the extension means there will be four more semi-annual coupons due at the contracted coupon rate, and interest could be capitalised – implying a two-year zero coupon bond. On the other hand, the 2027 bond becomes a 2029 bond, with a two-year grace period on interest.

The deferral period (until 1 August 2024) will therefore take in three bond maturities (the upcoming September 2022 bond, the September 2023 bond, and the February 2024 maturity – for a combined principal amount of US$3bn), as well as a shed load of interest payments otherwise due over the deferral period (which we estimate at about US$2.8bn). Hence, all told, we calculate the proposal will therefore save US$5.8bn in payments over the next two years (the Ministry of Finance says US$5bn). There would also be another US$1.3bn principal due on 1 September 2024 (plus interest), although this will be kicked into 2026. 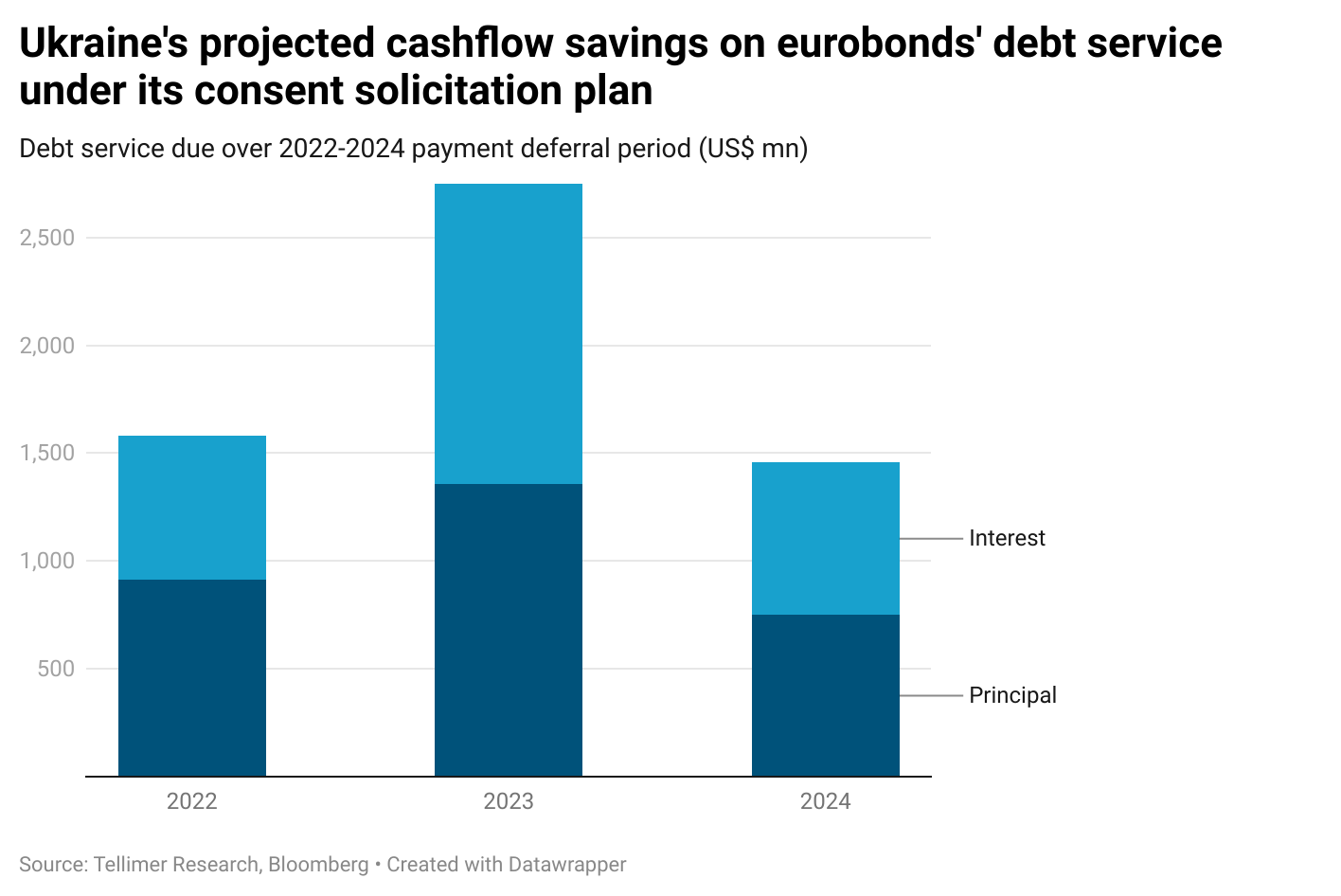 However, it's not that Ukraine will need to pay all the deferred amounts (US$5.8bn) in one go at the end of the deferral period – it couldn't – but this will be repaid over time, or capitalised. And in any case, this is of course if it is not seen as a prelude to a proper restructuring anyway.

Media reports had suggested Ukraine seeks agreement from bondholders for the consent solicitation by 15 August, although the timetable (expiring on 9 August) suggests this will be a little earlier. In any case, this would take it inside the 30-day grace period of the next eurobond interest payment, which is due on 1 August, and suggests the government will not pay that coupon on due date and instead seek to use some of the grace period to get an agreement (if it does not done sooner).

However, Ukraine says it will continue to service its bonds as scheduled if bondholders reject the consent solicitation – we might expect it to say that although such a commitment may not be credible (and so Ukraine could end up in hard default). Consent solicitation would offer a smoother way through and, by waiving an event of default, would protect Ukraine from any holders that sought legal action (during the deferral period) – however, we think ratings agencies may still regard it as selective or restricted default. Besides, we are sure bondholders will be aware of the optics if they reject the consent solicitation and the pressure they will come under from the official sector and their respective governments from doing so.

In addition, official bilateral creditors in the G7 and the Paris Club (the "Group of Creditors") also announced on 20 July their intention to suspend principal and interest payments on bilateral debts from 1 August 2022 until end-2023, with the possibility to extend the suspension by an additional year. The Group of Creditors expressed their support for the consent solicitation on the eurobonds and GDP-linked warrants, and strongly encouraged holders to give their consent to Ukraine’s requests.

However, it is not clear how much this amounts to. It may not be much. Ukraine's Paris Club debt amounts to US$4.7bn (comprising US$790mn in ODA claims and US$3.9bn in non-ODA claims), as at end-2021, according to Paris Club data, and so debt service may be expected to be relatively low given likely concessional terms. Still, even if it isn't a huge amount, it sends a strong message to other, non-traditional bilateral creditors, and in this post-DSSI world of comparability of treatment, it may have been awkward for Ukraine to seek PSI from its bondholders without seeking something similar from bilateral creditors.

In this regard, what we have is a Debt Service Suspension Initiative (DSSI) for Ukraine, echoing the G20's DSSI for low income countries created in March 2020 in the wake of the pandemic, albeit here with official sector and – likely – private sector participation; as we called for in March.

We make two other observations on the proposal:

First, while there is a precedent in the case of Cote d'Ivoire for seeking to repay missed interest payments on a bond over time in the face of conflict (the only similar case we can think of – and a point we made in March after Russia's invasion of Ukraine), Ukraine's plan differs in design. Cote d'Ivoire missed three coupon payments on its restructured 2032 bond in 2010-2011 and repaid them over a two-year period (December 2012-December 2014) on a semi-annual basis (ie in five payments), with repayments in the form of additional payments to scheduled coupon payments over this period. The difference perhaps reflects that Cote d'Ivoire was simpler (involving just one bond) while Ukraine is more complicated (needing to cover 13 bonds with a total principal amount of US$19.5bn). Another difference is that Cote d'Ivoire had already suffered a default (non payment), so its was really an ex post temporary debt suspension agreement, whereas Ukraine is trying to pre-empt that. For more background, see the Cote d'Ivoire country chapter of our Debt Guide.

Second, the intention to defer payments notwithstanding, we don't see this as being the end of the matter and implying that bondholders will escape with just a light reprofiling. Oh that it were (or it could be if the war ends very soon). While we think it is a sensible holding strategy (which diverts resources to more pressing needs and enables the government to focus on more important matters, rather than face the distraction of investor questions about whether they will remain current or not), rather we see it as a prelude to a more comprehensive treatment further down the line (similar to what we saw in Ecuador in 2020), after allowing the authorities, along with the IMF and its other bilateral partners and donors, time to undertake a proper assessment when the situation allows. While the immediate cash flow relief is welcome, it provides little NPV relief and doesn't touch the nominal debt stock (at a time when we think public debt/GDP is likely to have increased to well above 100%).

That said, that's a conversation for another time. For now, even if the war ends tomorrow, the two-year freeze makes sense, to buy time (and save money). Too short a freeze (eg six months) would run the risk of needing to be rolled over (again and again) if the war was still running, which could have been a source of frustration. And even two years might not be enough. But we'll have a better sense of the situation, and options, by then.

Hence, from a valuation perspective, while the NPV of the bonds under the deferred payment schedule would imply only limited losses compared to that under the original payment terms, at plausible exit yields, and would imply upside from current default prices, we hesitate to infer that this means the bonds now offer value under a light reprofiling solution given still significant downside risks.

We retain our Hold on Ukraine USD bonds, with UKRAIN '32s indicated at US$18.2 (mid-price basis) as of cob 20 July on Bloomberg.

We'll revisit what this means for the GDP warrants another time.