Ukraine returns to the polls on Sunday, 21 July for snap parliamentary elections. Originally scheduled for October, they were called early by new President Volodymyr Zelensky after he took office on 20 May. Zelensky had a strong political incentive to seek early elections. After his inauguration, he was a president with a new political party, but no MPs.

The parliamentary (Rada) elections offer Zelensky the chance to capitalise on his popularity and finally pursue his own policy agenda. They will give him the chance to form a legislature that supports his policy agenda, as his new Servant of the People Party (“Sluha Narodu”) currently has no representation in the Rada. He can also install his own government – under Ukraine’s system, the president is head of state, but not head of government, so he inherited former president Petro Poroshenko’s government led by Prime Minister Groysman (who resigned in May).

After the Rada elections, Zelensky will be able to choose his own prime minister (it is not clear yet who his preferred choice is), although parliament has the power to veto it. In short, governability will be a lot easier when Zelensky can pick his own government and if he controls Parliament. He will want to show quick results too, especially on tackling corruption.

Opinion polls suggest Zelensky’s party should do well in the coming election, although it is not clear whether he will secure an outright majority. Voting intentions put his Servant of the People Party at a solid and consistent 30%-40% over the last several weeks (Figure 1), and around 40%-50% of the vote if we remove those that say they won’t vote, and the undecideds (Figure 2). The latest KIIS poll on 13 July for instance, puts Zelensky’s party at 50.3% on an adjusted basis, according to our calculations. However, that may still not be high enough to translate into an absolute majority by seats given how they are allocated (half the seats are elected by direct vote, while the other half are elected by a party list). If Zelensky is unable to gain an absolute majority, he will have to form a coalition to govern, or rely on possibly fragile alliances, which could undermine the effectiveness of policy-making.

Trailing behind Zelensky’s party in the polls in second place is Opposition Platform, now the main pro-Russia party (after spinning out of the Opposition Bloc party), with about 10%-12% of the adjusted vote. This party is likely to form the single biggest opposition party in the new Rada.

In third place is European Solidarity, the re-branded party of former president Poroshenko, with about 7.5%-8.0% of the adjusted vote. Yulia Tymoshenko’s Batkivshchyna (Fatherland) is in fourth with 5.5%-8.0% of the adjusted vote. Holos, the party of popular rockstar Svyatoslav Vakarchuk (another political outsider) also polls around 6.5% on an adjusted basis, although its vote seems to be more volatile (between 4%-9%). The party could form a natural coalition ally for Zelensky however, if he lacks an outright majority.

Civic Position (the party of presidential candidate and former defense minister Anatoliy Hrytsenko) and the People’s Front (former prime minister Arseniy Yatsenyuk's party) are both unlikely to meet the 5% threshold required to enter parliament, according to the polls.

As well as completing Zelensky's rise to the top, the elections are likely to be significant in several other respects. First, the composition of Ukraine’s parliament will look very different to previous ones, with many new and inexperienced MPs. Zelensky has said his party would exclude from its list anyone who was previously an MP. Even Poroshenko may exclude some old faces in his party's re-brand.

Second, the other side of the coin, is the collapse in support of the parties that did well in the last parliamentary elections in 2014, when Yatsenyuk’s People’s Front won with 22.1% of the vote, and Poroshenko’s party came second with 21.8%. Indeed, Poroshenko and the other stalwart of Ukrainian politics, Yuila Tymoshenko, could even struggle to reach the 5% threshold required to enter parliament. Tymoshenko’s Batkivshchyna party scraped through in 2014 with 5.7% of the vote.

Third, much could depend on where the still relatively high share of undecideds go (about 10-20% of the vote, depending on the poll). This could comfortably tip Zelensky into a majority. Or it could increase the support of the more traditional parties.

The serious work for President Zelensky will start after the Rada elections. Investors and IFIs will hope that he will be able to form a reformist government with a stable majority, and that he will succeed in implementing reforms where his predecessors have failed. If that happens, it should improve the investment outlook for Ukrainian bonds. 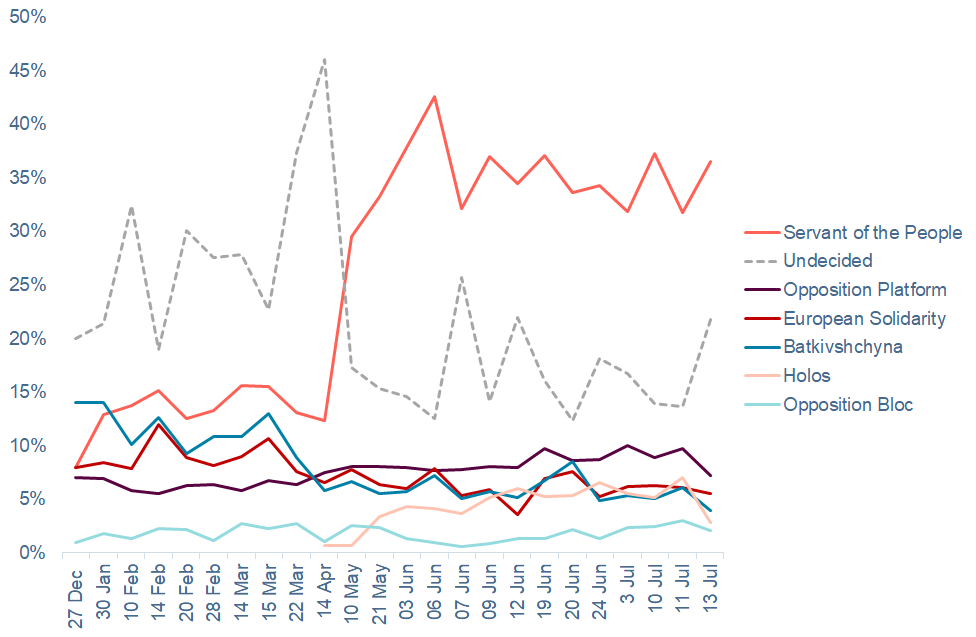 Source: Bloomberg. Some parties omitted for ease of presentation. *Of those surveyed, according to different pollsters. Total includes undecideds and those who say they won't vote. Dates mark different poll releases.

Figure 2: Voting intentions for Zelensky's Servant of the People party (% of vote*)